Briefing: Can you get coronavirus twice? Your COVID-19 questions answered

Virginia cougar sightings: Real or just cat tales?
0 comments
Share this
Only $5 for 5 months
1 of 4 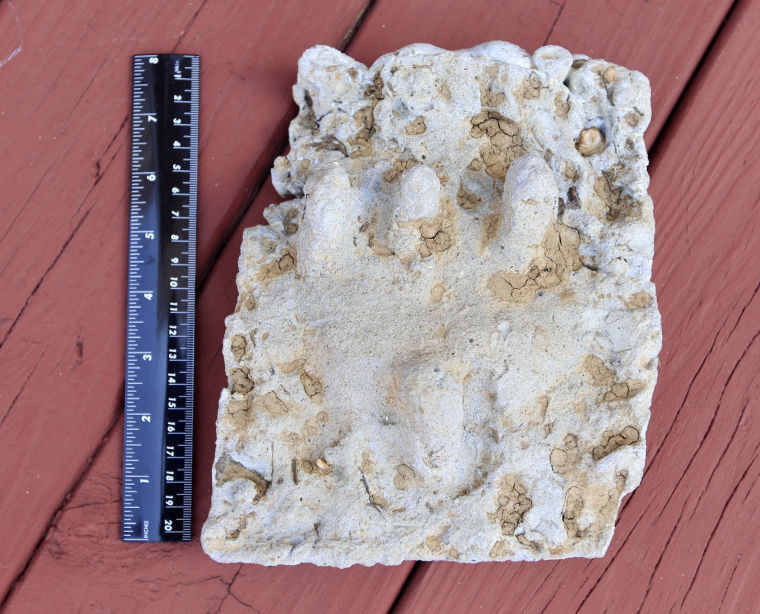 A ruler shows the size of a paw print cast by Albemarle County farm owner Ed Creasy who believes it was a panther track. Photo/The Daily Progress/Andrew Shurtleff 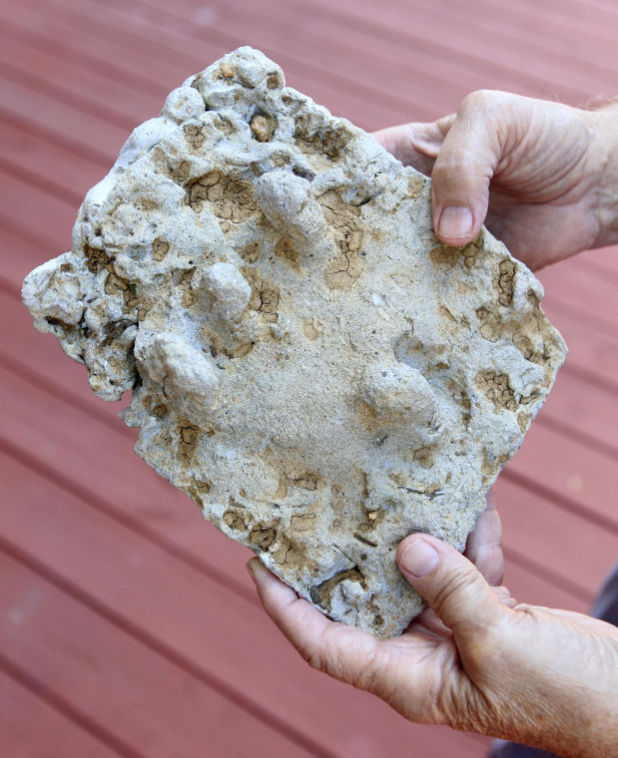 Ed Creasy holds a plaster cast he made of a print he believes to be that of a cougar seen recently on his farm in Albemarle County. 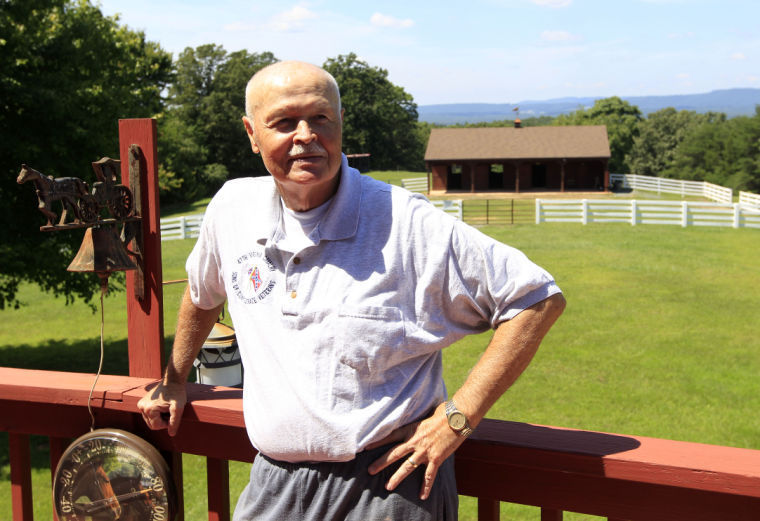 Ed Creasy, who lives in southern Albemarle County, said one of his farm hands came to him in some agitation, swearing he’d seen a black panther. The man described the sighted animal precisely. Creasy immediately tracked the animal across his farm. He said he found huge tracks in the mud at his pond. Creasy, an ex-FBI, decided to make a cast of the paw print and contact the Virginia Department of Game and Inland Fisheries. Photo/The Daily Progress/Andrew Shurtleff 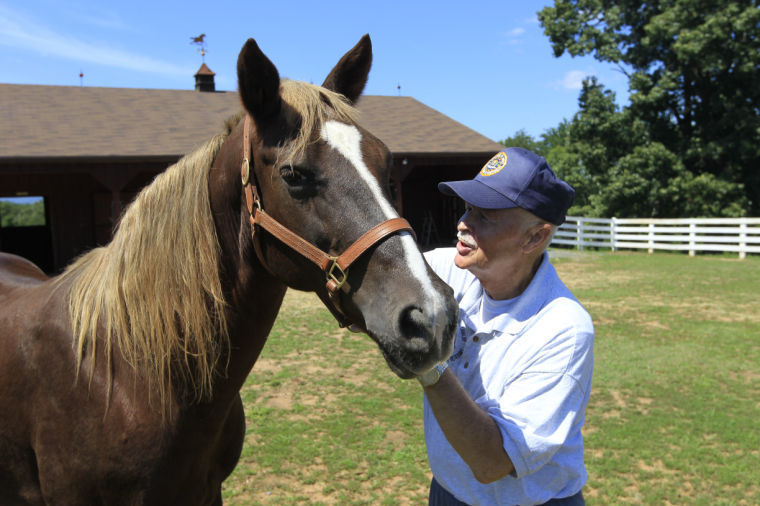 Ed Creasy owns the property where a landscaper, who is also a seasoned woodsman, said he spotted a black cat resembling a cougar. The landscaper said a nearby horse became alarmed before he made the sighting.

A funny thing happened while Tim Bennett weed-whacked on a Scottsville farm two weeks ago: a big black cat crossed his path.

It was a really big black cat.

“He was all black, had a round face and long, black tail,” said Bennett, a seasoned woodsman who runs a landscaping business near Scottsville.

Bennett is pretty sure the cat was a black cougar, the elusive cousin of the elusive mountain lion that has been reported in a variety of Virginia mountain counties but has yet to be proven to exist.

Cougar sightings are commonplace with the big cats having been reported everywhere from Lynchburg and Bath County on to Rockingham County. Cougars themselves, however, are not as commonplace as their sightings.

In fact, no mountain lions, catamounts, pumas, American panthers, painters or mountain cats — all the same species — are believed to be full-time residents of the Blue Ridge Mountains, according to wildlife officials.

But Bennett’s eyes — and the odd behavior of a mare in a field — told him something different.

“I was doing some weed-whacking along the stable fence and one of the horses was there with me. I was going along with the weed whacker and she all of a sudden went up on her hind legs and kicked her front legs out,” Bennett recalled. “When she came down, she ran toward the stable and stopped. I shut down the weed whacker because I thought that’s what upset her.”

Bennett said the horse stared down toward the pond and pawed the ground with her front feet, making a distressed noise.

“I walked along the fence line to see what she was looking at,” he said.

That’s when he saw the cat.

“I proceeded to walk toward it and the cat proceeded to walk away, down toward the pond and then into the hollow. It walked with its head low and its tail toward the ground,” Bennett said. “It wasn’t like the cat was afraid of me. It was like it just knew that what was walking toward it wasn’t something it was interested in.”

There are doubts about the existence of black-furred or melanistic cougars despite thousands of reports over a hundred years because no bodies have ever been recovered. The Eastern cougar has been declared extinct, although its relative, the Western cougar, is alive and well in the Rocky Mountains and points west.

The only photo known to exist of a black cougar was shot in the 1950s in the Southwest. That cougar had dark gray fur on its sides and back, but pale gray fur on its belly.

“There has never been a documented case of an all-black cougar and the ones you see on television are all either jaguars or leopards,” said Mike Fies, wildlife research biologist at the state Department of Game and Inland Fisheries. “The Eastern cougar is considered extinct, with the last one being confirmed around 1880. There are no known resident populations. I haven’t seen one in the 30 years I’ve been here, and that makes it hard to accept that there is a resident population.”

Just because it hasn’t been proved doesn’t mean it doesn’t exist.

“We never say never about these things,” Fies said. “But we still have no evidence of their being in Virginia.”

Ed Creasy, on whose property Bennett saw the cat, believes.

“[Bennett] came to the house and he was kind of shaken. He said he saw a large cat with a black tail and a rounded face down by the pond,” Creasy recalled. “We found a footprint where it looked like the animal had walked around the pond.”

The former FBI agent did a quick preliminary investigation, making a plaster cast of a paw print.

“I hadn’t done a plaster cast in years and had to go to the store to get what I needed,” Creasy said. “When we got back to the pond, water had just started to seep into the print, which meant we had been there pretty close behind it. I dried the print lightly with some paper towel and made the cast.”

The cast is inconclusive, though what it shows closely resembles a cat print, with an apparent trefoil paw pad at the back end.

The idea of a cougar prowling the Blue Ridge foothills might be improbable, but it isn’t impossible. In 2011, a cougar was killed on the streets of Connecticut. The animal had walked for three years across six states only to meet its death.

According to the Connecticut Department of Energy and Environmental Protection, DNA tests showed the cougar made its way east from South Dakota’s Black Hills, its image captured on trail cameras in Minnesota, Wisconsin, Michigan’s Upper Peninsula and New York before the animal was struck and killed by a 2006 Hyundai Tucson outside Milford.

The cat’s death was not in vain, according to Science Daily. It taught researchers about cougar dispersals in which young male cats hit the road looking for mates. The dispersals from the West and Midwest can go far to the east and likely have occurred sporadically for many years.

That doesn’t mean that a lone male or female in a strange state will meet up with a lover and raise a family of resident cats.

“Neither males nor females will stop to establish a home range without the presence of possible mates. So, ultimately, for a new breeding population to start, a male and female who have dispersed separately from the West must randomly stumble upon each other in the 2 million square miles of habitat east of their range,” said officials from Mountainlion.org, an organization dedicated to preserving cougar populations.

“These random bets on exact location and timing, repeated over and over, represent the lion’s only chance for survival,” the publication states.

Sightings in the Midwest and East prior to 2000 commonly were attributed to rural myth, mistaken identity or the release or escape of lions once held as pets. Thanks to the killed cat in Connecticut, however, biologists say some of those sightings could have been dispersed males.

The nearest native pumas to Virginia are Florida panthers, which range from Florida into Alabama. There are believed to be only about 200 of them, although there also have been reports of cougar tracks and sightings in West Virginia and North Carolina.

Still, it’s unlikely cougars have filtered into the Blue Ridge, since no bodies, no photos and no feces have been found, Fies said. Regardless, he receives a lot of reports of puma sightings.

“That week, I had three reported sightings,” he said. “I’ve been in public meetings and asked how many people have seen a cougar and have almost everyone raise their hand. It just seems to me that if that many sightings were accurate, we’d see some evidence.”

Crozet-area residents have reported puma sightings for years, with a flurry around 2008.

“It’s been quiet recently, but for a while people were reporting them every few months,” said Mike Marshall, editor of the Crozet Gazette. “I think a lot of people don’t report them because they are afraid of being made fun of. I’m personally convinced they’re here.”

Fies said he has no doubt those who reported seeing cougars saw something; he just doubts they saw cougars.

“People misidentify them with a lot of things,” he said. “Bobcats are in the woods and from a distance, people easily mistake dogs for cougars. A lot of photos have been shown to be something else when they are reviewed.”

Fies said wildlife biologists doubt cougars would just disappear into the mountains without a trace. The Connecticut cat left tracks, trail photographs and scat across its path so that it was easy to follow once found.

“There’s no doubt that mountain lions are moving eastward. The Western cougar is definitely moving eastward,” he said. “Maybe there will be a time when some will colonize Virginia in the future.”

Bennett, however, said he believes that, be it Florida puma or Western cougar, there is at least one cat out there.

WASHINGTON (AP) — A dispute that erupted into gun fire during a large outdoor party in Washington, D.C., early Sunday left one person dead and…

RICHMOND, Va. (AP) — Hundreds of thousands of applications for mail-in ballots that a voter-advocacy group sent to voters in Virginia had the …

RICHMOND, Va. (AP) — Jerry Falwell Jr. took an indefinite leave of absence Friday as the leader of Liberty University, one of the nation's top…

Virginia first to roll out pandemic app from Apple, Google

RICHMOND, Va. (AP) — Virginia has rolled out a smartphone app to automatically notify people if they might have been exposed to the coronaviru…

Virus testing in the US is dropping, even as deaths mount

U.S. testing for the coronavirus is dropping even as infections remain high and the death toll rises by more than 1,000 a day, a worrisome tre…

McLean, Va. (AP) — One of Robert F. Kennedy’s children is suing over custody of a decorative planter outside the historic northern Virginia ho…

A ruler shows the size of a paw print cast by Albemarle County farm owner Ed Creasy who believes it was a panther track. Photo/The Daily Progress/Andrew Shurtleff

Ed Creasy holds a plaster cast he made of a print he believes to be that of a cougar seen recently on his farm in Albemarle County.

Ed Creasy, who lives in southern Albemarle County, said one of his farm hands came to him in some agitation, swearing he’d seen a black panther. The man described the sighted animal precisely. Creasy immediately tracked the animal across his farm. He said he found huge tracks in the mud at his pond. Creasy, an ex-FBI, decided to make a cast of the paw print and contact the Virginia Department of Game and Inland Fisheries. Photo/The Daily Progress/Andrew Shurtleff

Ed Creasy owns the property where a landscaper, who is also a seasoned woodsman, said he spotted a black cat resembling a cougar. The landscaper said a nearby horse became alarmed before he made the sighting.