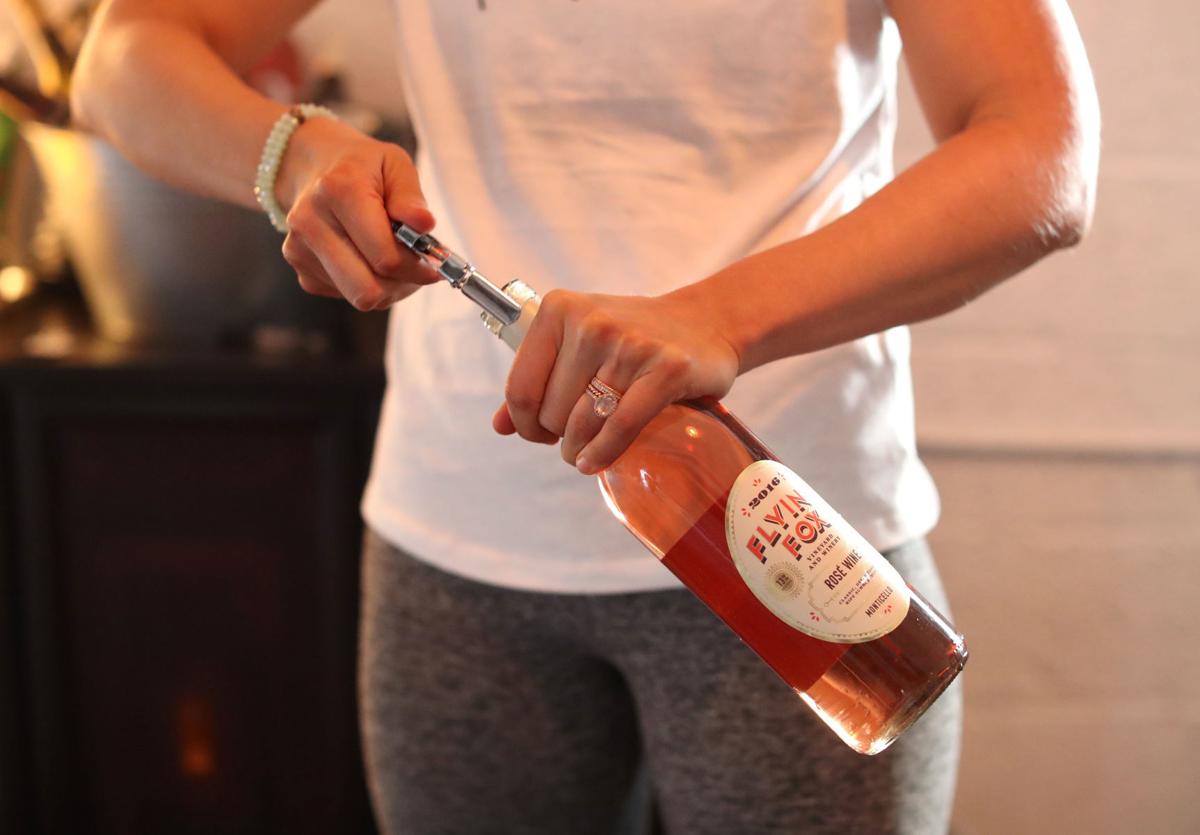 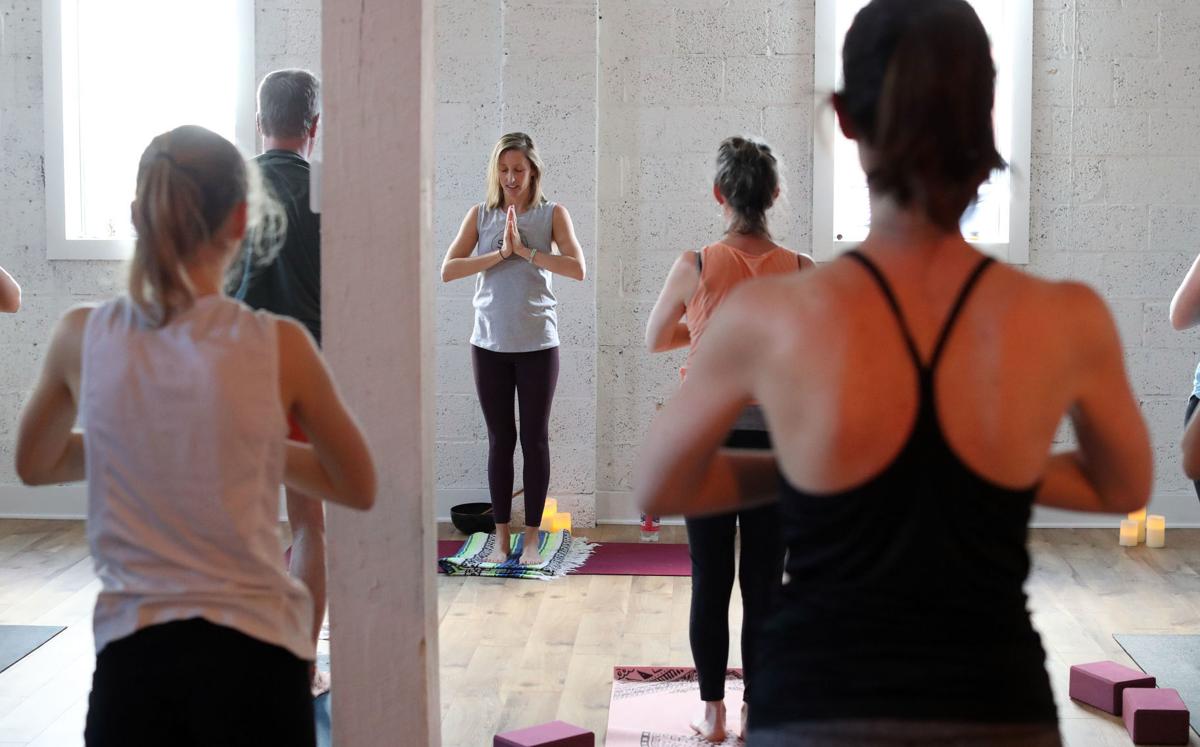 As the clock struck 7 p.m. at Santosha Yoga in Crozet, 18 yogis rolled into the fetal position, sent “loving and kind thoughts” to the backside in front of them, then beat a quick path to waiting glasses of chilled wine.

The March 30 “Friday Wine Down” yoga class — pairing asanas with a cup of Virginia viognier — was just the second such event for Santosha this year.

However, it marks a burgeoning trend among yoga studios and even independent yoga teachers. To survive financially, many are carving out ever more narrow and quirky niches to attract a loyal clientele.

Santosha’s draw is so compelling, in fact, that at least two women admitted to skipping the yoga part entirely. Coincidentally, both blamed their dogs.

“It was a dog-walking accident,” explained Kat Alves, a mother of one who waited pensively in the lobby for the class to finish. “She pulled one way, I pulled the other — the doctor thinks I tore my rotator cuff.”

A less serene Kylie Ashcom rushed in just as the wine was being decanted. “My dog is spending the night at the SPCA, thanks to my 13-year-old son,” she said. “I missed the yoga but came for the community.”

Santosha’s owners, Chloe Watkins and Ashley Holland, hit on the wine angle almost immediately when they bonded at a couples’ class at FlyDog Yoga and discovered they both had connections to the local wine industry — and they both dreamed of opening a yoga studio.

Watkins and her siblings own Flying Fox Vineyard, and her parents own Veritas Vineyard & Winery; Holland’s husband, Damian, is the winemaker at Afton Mountain Vineyards.

“It was the right partnership, the right timing and the right spot,” Holland said. “All of that fell into place together.”

That is exactly the sort of symbiosis that fitness-studio business consultant Lise Kuecker urges her clients to seek out in a saturated market like Charlottesville.

“They’re not just competing against yoga studios,” Kuecker said during an interview at her home, a gassy 5-month-old in her arms. “They’re competing against every other boutique studio in town plus ACAC and the YMCA, where they’re going to get many of the same yoga instructors.”

It’s hard to pinpoint just how saturated the yoga market is in Charlottesville. But there are at least 60 yoga teachers within 40 miles of the city in Yoga Alliance’s online directory alone, and 26 boutique fitness studios listed at Lululemon, a purveyor of upscale stretchy activewear.

According to 2016 research by Yoga Alliance, just 28 percent of Americans had done yoga. Of those, 45 percent prefer to do it in a studio. That all translates into maybe 11,000 locals who might be interested in paying money to bend and breathe deeply.

A two-room studio probably needs 250 to 300 regular clients to provide an owner a “comfortable lifestyle,” according to Kuecker’s calculations. And, she said, only 15 percent of people who buy introductory packages become long-term clients. The margin for error is slender.

Some enterprising yoga instructors, such as Shannon McElroy and Catherine McMahon, sidestep this math by creating their own compelling class offerings outside the studio setting.

McElroy teaches “Pints and Poses,” a monthly class at Random Row Brewery. For $10, students get a Hatha-style yoga class and a pint of beer.

Forty-five students showed up to her first class in January 2017, and she’s still drawing 20 to 30 students each month, she said. (Her next class is May 6.)

Pairing beer and yoga has become so popular, in fact, the Wall Street Journal featured the trend in March.

McElroy noted an important distinction between her classes and those featured in the Journal.

“We’re not actually drinking beer in my class,” she said. “I like to focus on yoga and then enjoy the aftermath — the beer part — afterwards.”

McElroy doesn’t pay rent because her husband, Kevin, is one of the brewery’s co-owners.

But she’s also not depending on yoga income to survive. She is a part-time nurse, and she teaches a few yoga classes at ACAC.

Catherine McMahon, on the other hand, teaches at five different studios in the area, but her personal niche is teaching standup paddleboard yoga at Beaver Creek Lake in western Albemarle County. (Classes are expected to resume the week of May 21.)

A former nanny and surfer from California, she trained as a yoga instructor in Asheville, North Carolina. At the training center, she saw a photo of someone doing yoga on a paddleboard. She was captivated.

“It was very synchronistic,” she said. “I had been trying to find a way to continue having a water life here in the mountains, and that opened my eyes to the niche.”

Instead of investing $200,000 to build out a studio in rented space, she bought a fleet of seven boards and agreed to pay a 6 percent cut to the county for the use of the reservoir.

She can teach maybe 10 students at a time at $37 per class — $35 for BYOB paddleboarders — but she’s still constrained financially by the fact that it’s seasonal work and her body won’t let her teach more than two paddleboard classes per day.

McMahon has been running her business, Mango SUP and Yoga Adventures, for five years; she still hasn’t reached her goal of being able to spend winters traveling, practicing yoga and surfing.

“I’m a one-woman show,” she said. “I have to figure out whether I want employees or to keep doing my own thing, or to go in a different direction completely.”

Like most small businesses, about 80 percent of yoga studios fail in the first three years, said Kuecker, the studio consultant.

“If you make it past three years, it becomes a question of how long you can keep up the pace,” she said. “We see a lot of successful owners exiting between years seven and nine because of the intensity of the schedule.”

At that point, many owners move on to training yoga teachers or running yoga retreat events, like the “Friday Wine Down” yoga retreats at The Market at Grelen in Orange County. Those events pair yoga with breakfast, lunch, wine, horseback riding and spa services.

“You have to take the time to sit down with them and figure out why they’re coming in, and be accountable for helping them meet their goals,” she said. “You have to accept that you’re kind of a therapist.”

There also needs to be a “come to Jesus moment,” she said, with looking at the instructor roster and compensation models with a gimlet eye. It’s counterintuitive, but paring back the number of instructors may help build mutual trust and loyalty between clients and teachers.

And, of course, find that niche. There’s always a new one just waiting to be tapped, whether it’s defined by a type of client or a new setting — especially in a place like Charlottesville.

“I could have seen yoga on ice making it here,” Kuecker said, with a tinge of regret. “If only our ice rink had survived.”

WASHINGTON (AP) — Dr. Anthony Fauci has been a political lightning rod since the early days of the pandemic, lionized by the left and villaini…

MAIDENS, Va. (AP) — When Sherry Brockenbrough and her family opened a distillery on a leafy vista overlooking the James River on March 5, 2020…

BLACKSBURG, Va. (AP) — Management at a Virginia restaurant being investigated for reports that customers were drugged says it is taking extra …