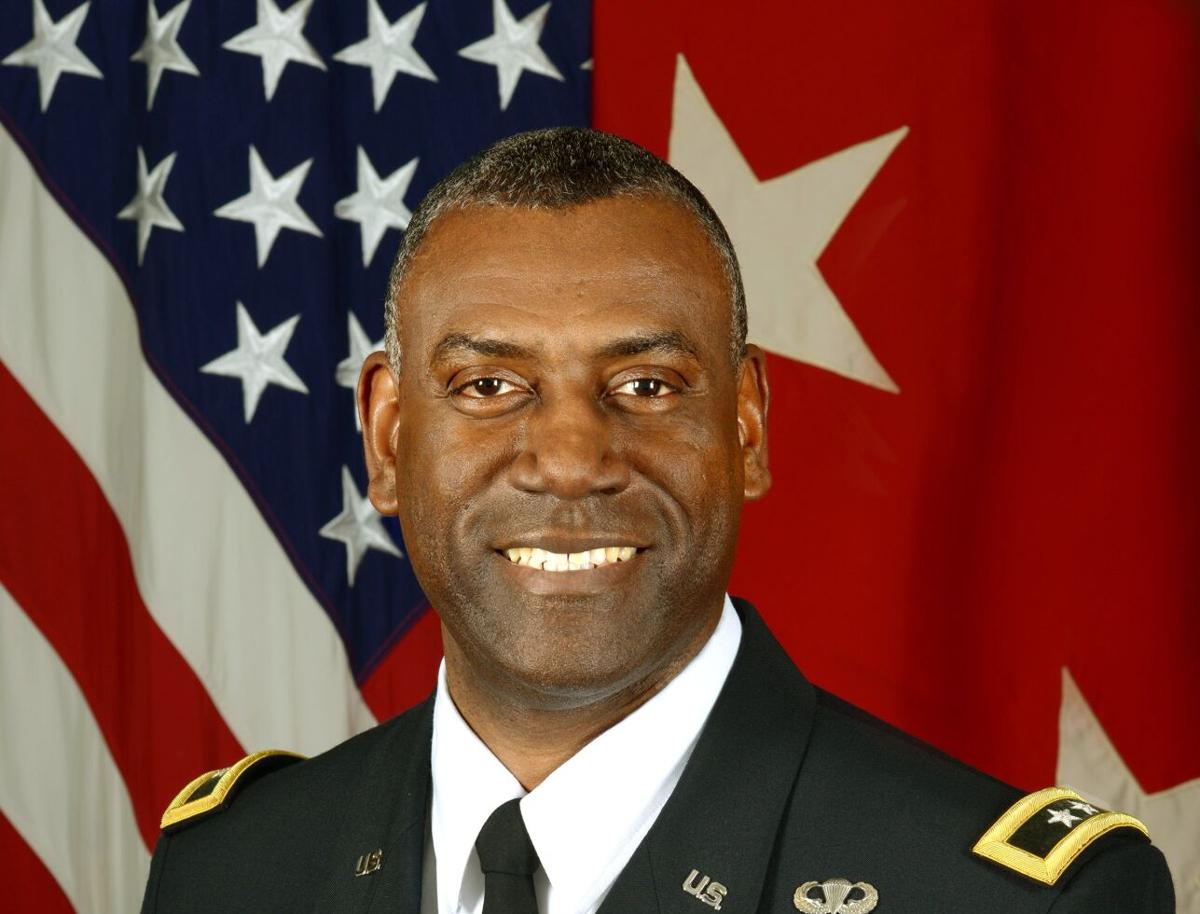 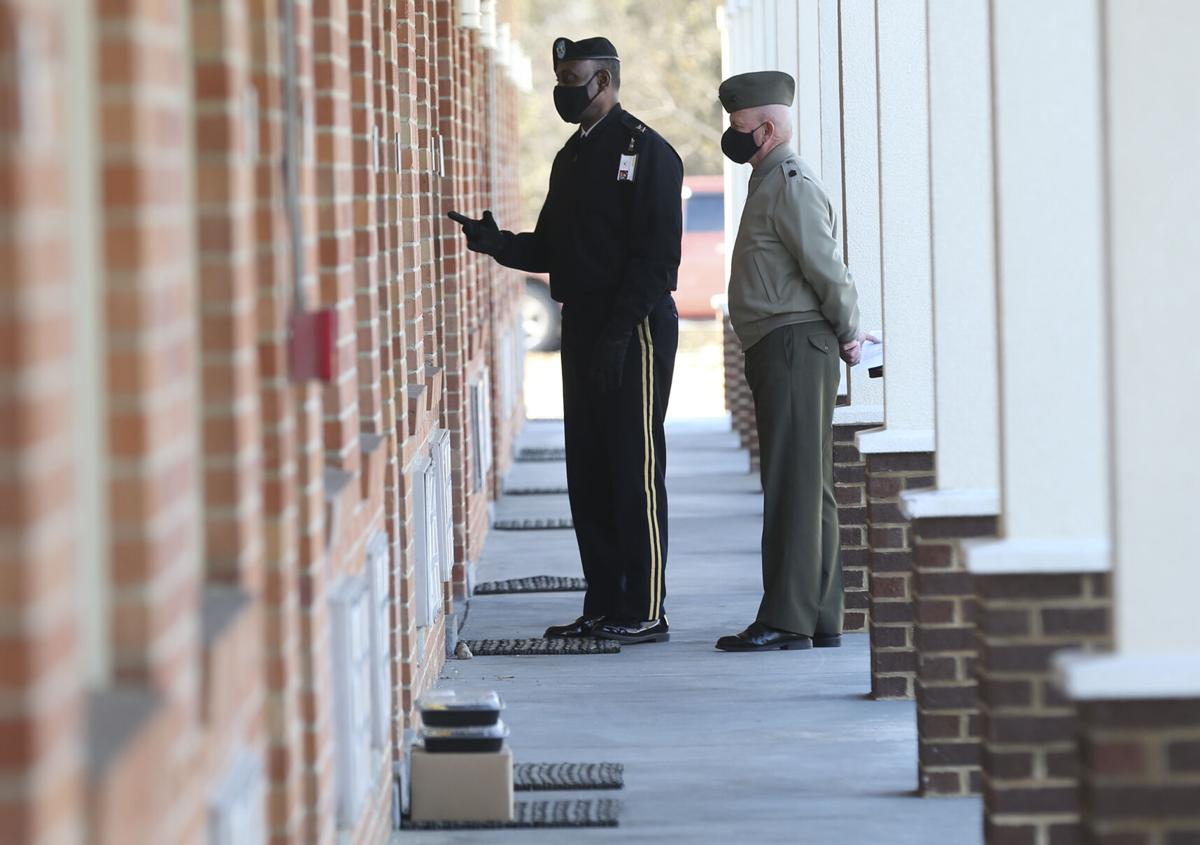 Maj. Gen. Cedric Wins, who was VMI's interim superintendent at the time, visits cadets who had been quarantined and isolated because of COVID-19 in February, accompanied by Sgt. Maj. Tom Sowers.

Virginia Military Institute has chosen Maj. Gen. Cedric T. Wins as its first Black superintendent to guide the nation’s oldest state-supported military college as it reckons with allegations of systemic racism and its complicated historic ties to the Confederacy.

VMI’s board of visitors selected Wins, a 1985 graduate of VMI who retired from the U.S. Army in 2019 after a 34-year career, in November to lead the college on an interim basis. The board voted unanimously Thursday to keep him on as the permanent superintendent.

“If someone had told me a year ago that today I’d be the superintendent of my alma mater, I would have told them they were crazy,” Wins said in a statement. “However, the interactions that I’ve had over the past six months with VMI’s outstanding cadets and dedicated faculty have been some of the most rewarding interactions of my career. The fact of the matter is I believe in the honor, integrity, civility, and sacrifice that we instill in our cadets. I’m excited to once again be a part of that and am looking forward to leading this next chapter of the Institute’s history.”

Wins succeeds Gen. J.H. Binford Peay III, who resigned in October following pressure from the governor’s administration and legislators who expressed that they had lost confidence in Peay to usher in the progress they wanted to see from the college.

VMI is in the midst of an independent investigation regarding allegations of racism. The Roanoke Times first published a story last June recounting the experiences of Black alumni, and their request that the college take down the statue of Confederate Lt. Gen. Thomas “Stonewall” Jackson, which cadets had to salute or be punished up until a few years ago.

Investigators issued an interim report last month that found that the utterance of racial slurs has been “common” at VMI and that numerous incidents of sexual harassment and assault have occurred since women were admitted to the military college nearly 25 years ago.

Investigators are expected to complete their investigation by June, with a final report issued in June or July. That report should include recommendations.

The college has made progress since the investigation began. It removed the statue of Jackson from campus in December. Kasey Meredith will be the first woman to lead the Corps of Cadets as regimental commander for the 2021-22 school year.

Wins has said he welcomed the investigation and wanted transparency.

“I’m interested in doing my own assessment of what’s going on at the Institute and figuring out what our blind spots are or may be and then charting a path and moving forward,” Wins said in November.

Wins said in a video addressing alumni on Tuesday that he met with the investigative team from Barnes & Thornburg two weeks ago for about four hours for an interview about his assessment of VMI. He said he will meet with them again for a second interview.

“I wanted to ensure that I could get from the investigative team their commitment that they were looking at this thing with an unbiased lens and that they were going to be fair in their assessment,” he said. “I have an expectation that they will certainly give us things that will be actionable.”

VMI said Thursday that Wins has spent much of his first three months assessing the culture, policies and procedures currently in place. He’s met with cadets, faculty, staff, parents and alumni to understand their needs and concerns.

“Everything I’ve seen here, by any measure, VMI is a much better institute than it was when I was here, and that only comes through a willingness to see the areas where improvements can be made and then pursue change where it’s necessary to make VMI a better place and a place where all who have come before and all the people who will come after and those who are here now — which is my No. 1 focus — can be proud of their experience they’re going through here at VMI,” Wins told alumni this week.

The college said his priorities moving forward include ensuring that the college fosters a community that prioritizes diversity and inclusion; building a brand that highlights that cadets are taught to exemplify honor, civility and service above self; valuing the Honor Code; and pursuing success on the drill field and in the classroom and athletics.

Wins grew up in the Washington, D.C., area and attended VMI on a basketball scholarship. He was the first in his family to attend college. A standout basketball player, Wins was one of the top five scorers in the college’s history when he finished his career there. He also led the team to the Southern Conference finals in his first-class year.

He also holds master’s degrees from Florida Institute of Technology and the National War College.

In his final post before retiring from the Army, he was the first commanding general of the U.S. Army Combat Capabilities Development Command, the Army’s largest technology developer. After retiring, he worked for a defense contractor and serves on a board focused on STEM opportunities for underserved youth and on an advisory board for Spelman College.

“Maj. Gen. Wins has distinguished himself as a leader whose dedication to the Institute’s mission and to the Corps of Cadets has endeared him to many during his brief time as interim superintendent,” board President John “Bill” Boland said in a statement. “VMI’s mission, Honor Code, and regimental and class systems are vitally important to the future success of our institution. There’s no question that Maj. Gen. Wins is the right person to preserve and advance VMI’s unique system of education moving forward.”

Investigators find use of racial slurs 'common' at VMI, incidents of sexual assault

Virginia Military Institute's interim superintendent said last week that he remains committed to the military college's honor code and its single-sanction system, but will consider changes to the oversight of the student-run justice system.

VMI commandant to retire at end of school year

Col. William Wanovich, who oversees military training at VMI, will retire at the end of the 2020-21 school year.

VMI's statue of Stonewall Jackson will be moved to the roundabout in front of the Virginia Museum of the Civil War, the military college announced in a statement Monday.

Maj. Gen. Cedric Wins, who was VMI's interim superintendent at the time, visits cadets who had been quarantined and isolated because of COVID-19 in February, accompanied by Sgt. Maj. Tom Sowers.