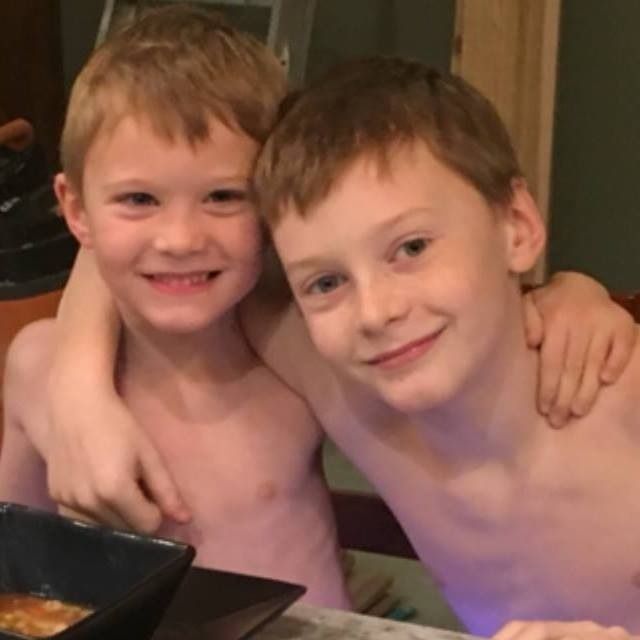 Life. It really is too short sometimes. It's also exactly as we make it. To envision 2 such spirits whisked away to other realms after such a short time with us here in the present is astonishing. To witness 2 young souls touch more lives in such a brief period is truly breathtaking. It is in this manner in which Patrick "P-Dawg" Carlyle McKinnon, 10, and Logan "The Loganator" Hayes McKinnon, 5, touched those around them. They both perished in a house fire at their home while sleeping on Saturday, March 19, 2016, around 1:15 a.m.These 2 brothers had a gift of life like so many young boys do, laughing, giggling, smiling, crying, bickering, wise-cracking, and then there was something different, something unique. It was their awareness. Patrick and Logan both had this extra ability to touch your soul and lift you up, even when you yourself did not know you needed it. They understood. They were able to feel your presence and act on it, giving just what was needed. Their methods could be a bit radical, but the result was still there. They wanted to make us think, with their countless array of intriguing questions. They wanted us to come together in unity, when all we wanted to do was fight. They wanted us to laugh and laugh in abundance when we would not laugh on our own.Both Patrick and Logan attended North Cross School in Roanoke, Va. They were incredibly fond of soccer, lacrosse, gymnastics, swimming, rock climbing, camping outside while sleeping under the stars, and FREQUENT AND REGULAR dance breaks. Patrick and Logan were very well travelled for boys their age, having followed their parents, Lindsay Hughes McKinnon and Thomas Patrick McKinnon, to a variety and large number of family and social events. In this manner, Patrick and Logan have met and interacted with thousands, literally, of people in a very small amount of time. In each of these moments in time, P-Dawg and The Loganator stole the show, by touching those around them physically, emotionally, spiritually, and intellectually. Some of their favorite locations included the annual LEAF Festival, family Beach Week on the North Carolina shores, Snowshoe, Smith Mountain Lake, and most recently the Bahamas. Each and every place they visited and person they met was touched by these special angels. Their friendships were plentiful and abundant with such amazing ties you would never expect from children their ages. Their bright blue eyes piercing the souls of everything and everyone around them in a simple yet complex manner that breeds new loves of life. Anyone who has simply seen a picture of them can relate.Patrick, born on Sunday, February 12, 2006, and Logan, born on Thursday, April 15, 2010, are survived by their parents, Lindsay Dunham Hughes McKinnon and Thomas Patrick McKinnon; grandmothers, Carlyle B. Martin and Emmalee W. Hughes; uncles, "Trevor" James C Hughes III and Captain William J. McKinnon, USMC, Ret.; and aunts, Anna McKinnon, Clarissa R. Bodman, and Kelly Monks LaBar.They are predeceased by grandparents, Donna Hayes and Chester Thomas McKinnon; and grandfather, James C. Hughes Jr. These and those around them are now charged with their duties of life, love, and happiness, and challenged to break down the barriers these two did with ease.A Celebration of Life service is scheduled for 3:33 p.m. on Sunday, April 17, 2016, at Wilderness Adventure at Eagle Landing in New Castle, Va. Bishop Brian Prior of the Episcopal Diocese of Minnesota and the Rev. Dixon Kinser of St. Paul's Episcopal Church in Winston-Salem, N.C., will be officiating.A special thank you is expressed to the incredible community at large that has taken these souls into their own.Both Patrick and Logan had intimate knowledge they were spiritual beings having a human experience on this Earth. May they rest in peace and joy as they are returned to their original essence.In lieu of flowers, please feel free to help the McKinnon family by making donations to www.youcaring.com/mckinnon. Online condolences may be expressed at www.johnmoakey.com.