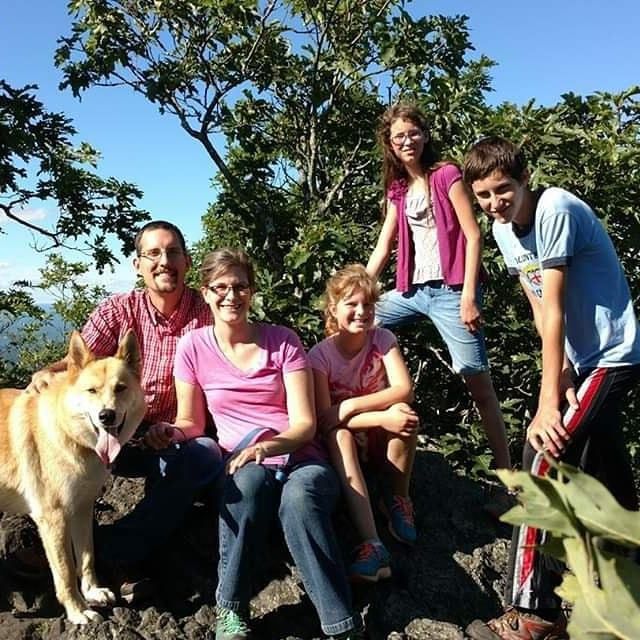 RUSGROVE Thomas Ethan Esther Marie Jennie Ruth June 24, 2019 Thomas Ethan, 37, and his daughters, Esther Marie Rusgrove, 14, and Jennie Ruth Rusgrove, 11, from Todd, N.C., and formerly from Franklin County were taken from us in an auto accident on Monday, June 24, 2019. Thomas is preceded in death by his mother, Lois Ruth Rusgrove. Surviving to cherish their memories are his wife, Leslie Holt Rusgrove; son, Joel Ethan Rusgrove; father, Richard Rusgrove and wife, Mary; sister, Susan R. Weeks (Joe); brothers, Jeffrey (Kim), Daniel (Judy), Matthew (Stephanie), Andrew (Sara); father and mother-in-law, Mitchell and Diane Holt; sister-in-law, Katelyn Parks (Shane); many nieces, nephews, and friends. Esther and Jennie are survived by their mother; Leslie Holt Rusgrove; brother, Joel Ethan Rusgrove; grandparents, Mitchell and Diane Holt, Richard and Mary Rusgrove; many aunts; uncles; cousins; and friends. If you were ever blessed with meeting any of the family then you know you were in their heart. 1 Corinthians 15:52, 57 "In a moment, in the twinkling of an eye, at the last trump: for the trumpet shall sound, and the dead shall be raised incorruptible, and we shall be changed. But thanks be to God, which giveth us the victory through our Lord Jesus Christ." As Leslie and Ethan continue to recover from their injuries, we thank each and every person for their ongoing prayers and ask that you continue, as they both have a long recover path ahead. A memorial service will be announced at a later date by Conner-Bowman Funeral Home, 62 VA Market Place Drive (Route 220 at Wirtz Road), Rocky Mount, VA 24151, www.connerbowman.com.

To plant a tree in memory of Thomas RUSGROVE as a living tribute, please visit Tribute Store.
+1
Plant a tree
+1

Dear Leslie, please know of my deepest sorrow for your loss of your husband and daughters. You have been in our thoughts and prayers from the moment we learned of what happened. May you, your son, and each family member and friend know the peace and comfort that come from God. My memories of you, your mother, and your sister are beautiful ones, just as each of you is beautiful.

Funeral homes often submit obituaries as a service to the families they are assisting. However, we will be happy to accept obituaries from family members pending proper verification of the death. If you wish to submit an obituary or in memoriam notice, you may contact us by calling 434-978-7294 or emailing obituary@roanoke.com or inmemory@roanoke.com

Obituaries in the news

Offer a personal message of sympathy...

You'll find individual Guest Books on the page with each obituary notice. By sharing a fond memory or writing a kind tribute, you will be providing a comforting keepsake to those in mourning. . From a Guest Book, you may log in with your user account to leave a message. If you have an existing account with this site, you may log in with that. Otherwise, it's simple to create a new one by clicking on the Create "Sign up" button and following the simple steps on the Sign Up page.