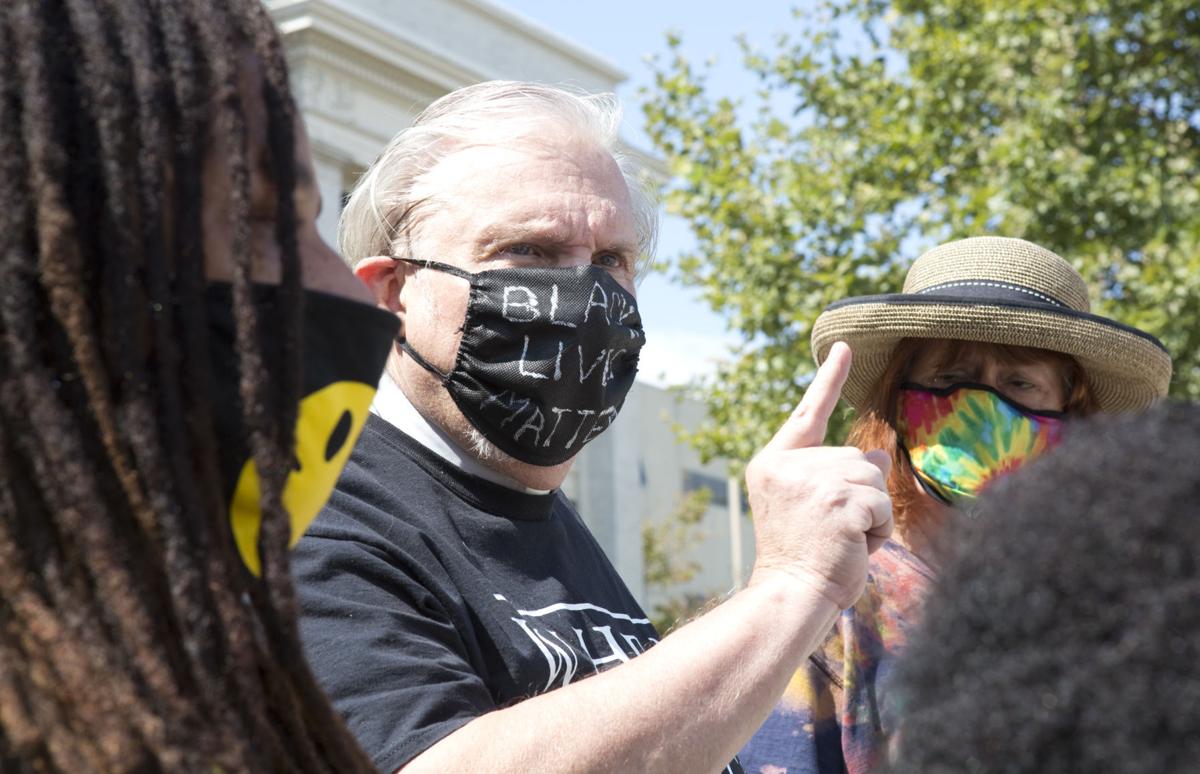 The Rev. David Denham with the Southwest Virginia Poor People’s Campaign, speaks during a press conference held by No Justice No Peace in Roanoke in June. 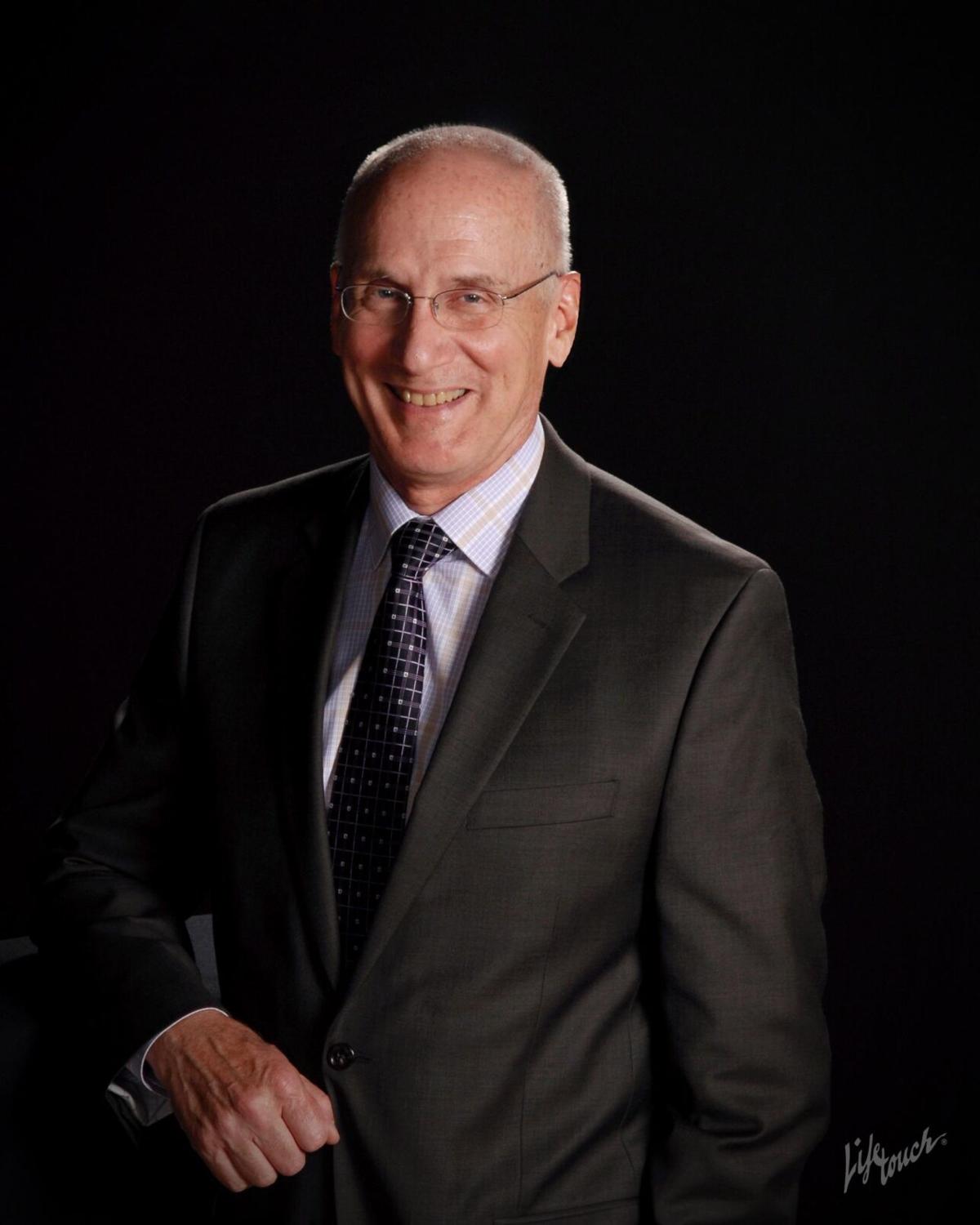 Inspired by its activist role in the civil rights movement of the 1960s, David Denham joined the United Church of Christ because he wanted to become a “troublemaking minister.” After more than 40 years leading congregations up and down the Mid-Atlantic States region, Denham and his wife Ann remain fervent troublemakers — proudly recalling their civil disobedience in standing up against corruption.

Twice the Denhams were arrested on the National Capitol steps along with 1,400 other protestors in a 2016 Democracy Spring anti-corruption rally. They were arrested yet again in the Roanoke office of their congressman, in an attempt to pressure Rep. Bob Goodlatte to release a bundle of draft campaign finance, government ethics and voting rights bills he was sitting on as then-chairman of the House Judiciary Committee.

These bills were eventually released and later passed in 2019 by the full House of Representatives as the “For the People Act” (HR – 1). Based on this experience, Denham is convinced that civil disobedience is one critical path to effect change. He credits the Democracy Spring rally with generating national headlines that spurred Rep. John Sarbanes (D-Maryland) to pressure Goodlatte to release the bills.

Denham is not just a troublemaker, he is also an organizer for social justice with a long track record of building strong alliances and effecting real change. He serves as the lead organizer for the Poor People’s Campaign (founded by Rev. Martin Luther King) in Southwest Virginia, working to raise awareness of multiracial poverty. And as the head of the cross-partisan Represent Roanoke Valley/the Clean Money Squad, he has been a strong advocate for anti-corruption reform in Virginia for the past six years.

His latest achievement involved supporting a constitutional amendment to end gerrymandering. In partnership with the OneVirginia2021 organization, Denham reached out to the national headquarters of RepresentUS for help. Their response proved pivotal in mobilizing volunteers nationwide to contact over 70,000 Virginia voters urging them to contact their legislators and demand that they vote in favor of the amendment.

Denham and members of Represent Roanoke Valley joined in a lobby day in Richmond to underscore how important ending gerrymandering was to Virginians. The amendment passed and was approved by voters across the state in the recent elections. Denham explained that this effort was a huge success for the anti-corruption movement.

Since 2014, Denham has been a real trailblazer in raising support for anti-corruption action, initially in Roanoke and Southwestern Virginia, then expanding statewide. Visiting businesses, arranging voter education tables at festivals and a range of public venues, and going door-to-door, Denham and other volunteers found that voters were very receptive to their message. Corruption concerned them and they wanted to take action. Signing pledges in support of The American Anti-Corruption Act (AACA) made sense to them, given its emphasis on stopping political bribery, ending secret money, and fixing our broken elections.

Having Delegate Sam Rasoul as a champion in fighting corruption had certain advantages as well. In 2014, Delegate Rasoul was the first elected Virginia official to sign onto the AACA. The next year, the Roanoke City Council passed an Anti-Corruption Resolution, the first jurisdiction to do so, followed by Vinton and Blacksburg.

Then in 2017, with Delegate Rasoul’s encouragement, Denham established the Clean Money Squad, a public website showcasing political leaders running in Virginia making anti-corruption commitments. In 2019, 26 candidates took a pledge to sign the AACA and three were elected.

Denham’s Clean Money Squad reached this impressive number of candidates by tapping an expanding network. They “piggy-backed” on the success of organizations like the partisan group Activate Virginia (focused on campaign finance reform) and Clean Virginia (an independent advocacy organization dedicated to fighting monopoly utility corruption in Virginia politics).

I asked Denham what more it would take to enact meaningful legislation, especially given the failure in the 2020 General Assembly to pass any of the 10 campaign finance bills proposed. He said the defeat of these bills “tells us that corporate money still is ruling the roost across parties, both Republicans and Democrats.”

To defeat the perverse influence of corporate money in Virginia politics, Denham stressed the need to “concentrate on identifying candidates willing to stand for anti-corruption measures, support them through the primaries and into the general election. The power of the voters is clear. We just need to be persistent. Once we get the people in place to make the change happen, the change will happen.”

Deal is a freelance journalist based in Vienna, Virginia.

Glenn Youngkin looks like a nice guy, but his messages are disturbing. For example, he says schools should not teach students what to think, b…

Liebrecht: Then and now, Grayson County acts against best interest

One hundred and sixty years ago, small farmers from Appalachia marched off to fight for an economic system from which they derived no benefit,…

Williams: Freedman Joseph R. Holmes was murdered on the steps of a Virginia courthouse. A new marker tells why his life mattered.

Michael Paul Williams — a columnist with the Richmond Times-Dispatch in Richmond, Va. — won the 2021 Pulitzer Prize in Commentary "for penetrating and historically insightful columns that guided Richmond, a former capital of the Confederacy, through the painful and complicated process of dismantling the city's monuments to white supremacy."

The Rev. David Denham with the Southwest Virginia Poor People’s Campaign, speaks during a press conference held by No Justice No Peace in Roanoke in June.