US economy slowed but still grew at 2.9% rate in fourth quarter 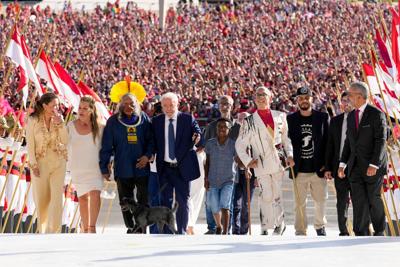 The world’s fourth-largest democracy swore in a new (and old) president after kicking its own second-rate Trumpian demagogue to the curb. Brazilian President Luiz Inácio Lula da Silva, better known simply as Lula, was sworn in Jan. 1, his second time at the helm of the diverse and massive nation, squeaking out a thin victory over Jair Bolsonaro.

The transition of power is itself a monumental relief for the country and the world, after Bolsonaro spent weeks toying with the idea of staging some kind of self-coup before ending up trundling off to Florida with his tail between his legs (sound familiar?). Yet Lula taking the reins is a development with significance much beyond the interest of 217 million Brazilians.

It is an event with planetary consequence for one key reason: Brazil hosts the majority of the Amazon rainforest, the lungs of the Earth, the globe’s richest biodiversity and 150-200 metric gigatons of carbon that would otherwise get released into the atmosphere and supercharge climate change. A disappearing Amazon doesn’t just release existing carbon but stops capturing the carbon released from other sources.

Bolsonaro seemed unbothered by this catastrophe in the making. Lula understands that no narrow commercial interests are worth the immeasurable costs and future devastation of a planet with a depleted Amazon.

The new president has already appointed a team with a real record of reversing deforestation, and has pledged to reinstate enforcement and regulatory actions that his corrupt predecessor relaxed. The whole Earth is watching the leader’s approach to the rainforest.

Imagine using technology that never forgets a face, while improving airport security and shortening lines. Such technology exists and may be coming to an airport near you.

Are today's parents worried about the wrong things? | The Ethical Life podcast

🎧 The hosts discuss a recent advice column, in which a grandmother said she was losing sleep about her 9-year-old granddaughter walking home alone from school.

The Biden administration has touted the return of diplomacy while failing to meaningfully deliver on this tenet in many ways.

Williams: Windsor police will pay too little price for their abuse of a soldier during a traffic stop

The shabby treatment of U.S. Army Lt. Caron Nazario – first by town of Windsor police and later by a federal jury in Richmond – typifies the anticlimactic denouement of our moment of racial reckoning.

Last Confederate monument comes down in Richmond, reporters share their coverage | After the Monuments podcast

Michael Paul Williams is joined by Richmond Times-Dispatch reporter Lyndon German and photojournalist Eva Russo who share their first-hand experience of covering the removal of the monument and exhuming of the general's body beneath it.

Dean Baker: Biden has earned a solid 'A' halfway through term

At the midpoint of President Joe Biden’s first term, he deserves a solid “A” for turning the economy around, getting the pandemic and inflation under control, and encouraging a rapid transition to clean energy. No president since Lyndon Johnson has as much to show for his first two years in office. Unlike Johnson, Biden managed to push key legislation with a tiny majority in the House and the thinnest possible margin in the Senate.

Column: The opioid crisis shouldn’t be a partisan issue

Four years ago, in the midst of a worsening opioid crisis where drug-related deaths were widening the gap as the leading cause of unnatural de…

Forget the nearly $4 million in campaign cash, the seasoned political staff and what he describes as promising polling.

Froma Harrop: The view from the suburbs looks bad for Santos and the GOP

Moderates are in the suburbs -- Democrats, Republicans and independents -- who want Washington spending kept in check. They tend to be liberal on social issues but pained over the extremes of the woke. They have respect for various sexual identities but little interest in learning new pronouns. And they overwhelmingly want some access to abortion.

Williams: The war on Black history is hurting white Americans too

As we approach February’s Black History Month, cynical politicians are attempting an erasure of the Black narrative in America history.