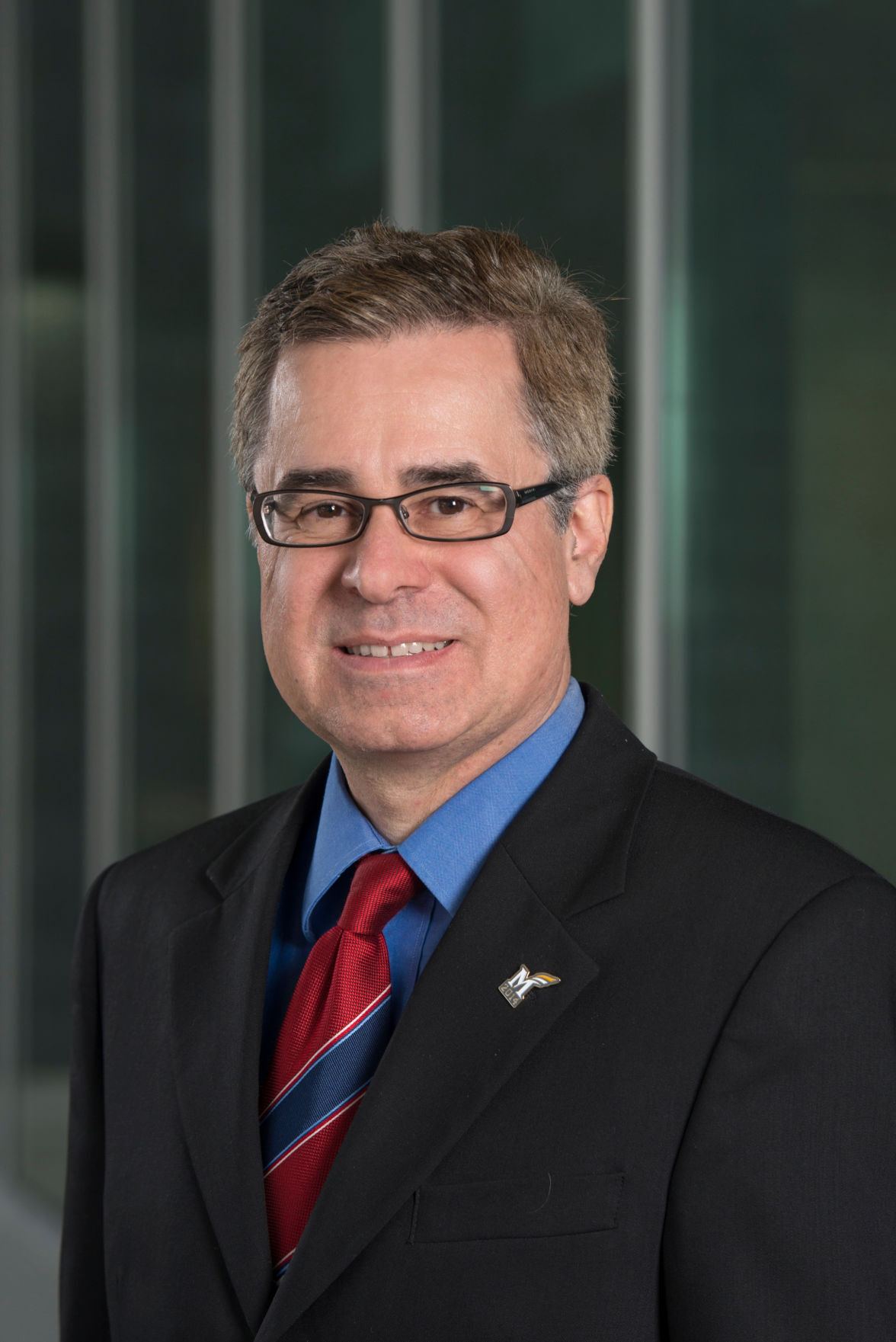 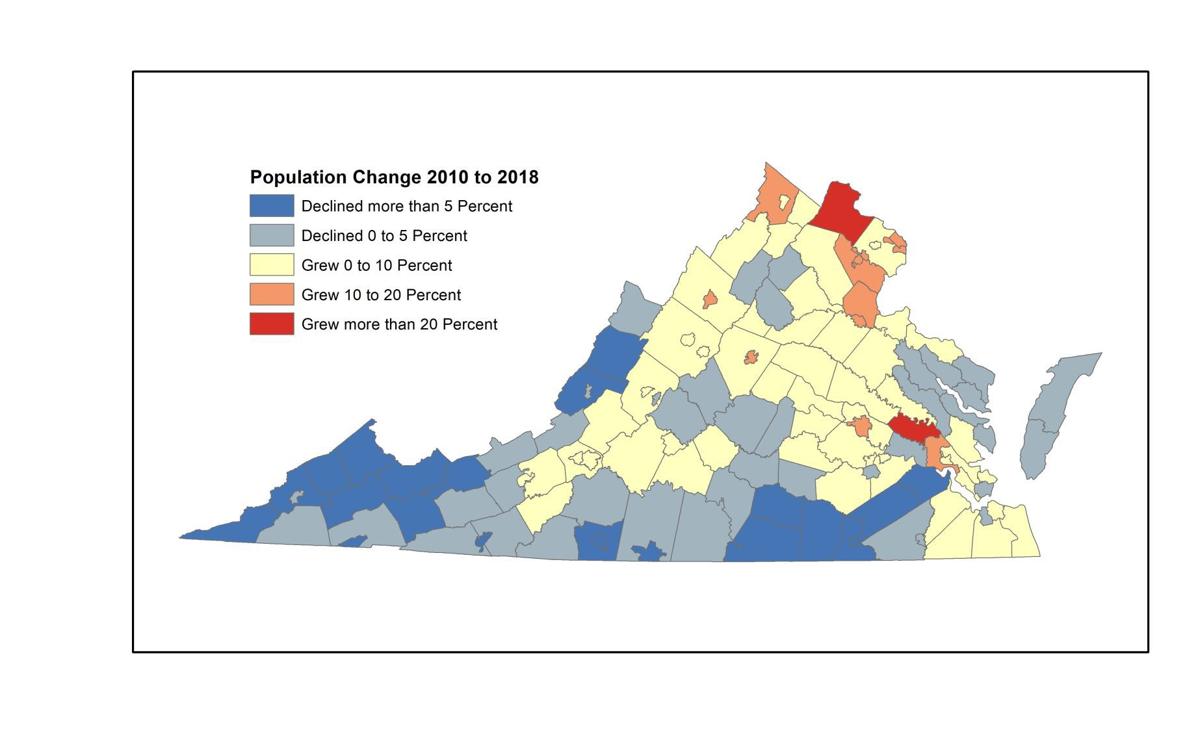 SThese two maps show how Virginia’s population is changing. The top map, which shows population changes from 2000 to 2008, shows high growth in Northern Virginia-to-Richmond corridor (in red), but only a relatively small number of rural localities (in blue) lost population. Many rural localities in Southwest and Southside Virginia gained population, albeit slowly. However, since 2010, two things have happened. First, the state’s population growth growth has slowed, with only Loudoun County and new Kent County showing up in the high-growth red zone. However, the number of localities losing population has expanded to include virtually all of Southwest and Southside Virginia.

Mark Rozell Rozell is dean of the Schar School of Policy and Government at George Mason University and co-author of the book Federalism: A Very Short Introduction (Oxford University Press, 2019).

Rural Virginia used to rule the commonwealth. Its delegates and senators dominated the House of Delegates and Senate, respectively, dictating state policy and politics well into the 1990s.

Governors from outside the “Urban Crescent” that loops from Washington’s bedroom communities south to Richmond and southeast toward Hampton Roads were not uncommon. The thriving tobacco, textile and furniture cities of Virginia’s Southside, southwestern Virginia’s coal-mining economy and the Shenandoah Valley were cradles of political might — House speakers, Senate majority leaders, kingmakers.

That was before industries in those regions atrophied and Virginia became a commonwealth of burgeoning suburbs and exurbs anchored in northern Virginia as the federal government expanded after World War II under Democratic and Republican regimes alike and, with it, government and defense contractors seeking proximity to power.

Population in those 17 Virginia localities leapt by 134% percent from about 1.3 million in 1980 to just over 3 million in 2018. From 2017 to 2018, they grew collectively by about 1%, but with exurban Manassas Park (3.8%), Loudoun County (2.5%), and Fredericksburg and Stafford County (2.2 percent each) leading the way according to research by the Stephen S. Fuller Institute at George Mason University’s Schar School of Policy and Government. Over the next 20 years, the most robust gains are forecast to push farther south and west into Spotsylvania and Frederick counties, 50 or more miles from the capital, where farms and forests are already giving way to shopping malls and residential subdivisions.

To a smaller but still significant degree, suburban sprawl has taken hold around Richmond, in Hampton Roads and on the Peninsula, transforming those communities socially, culturally, and politically.

This month’s election illustrates a political trend that has become increasingly clear in the past 15 years. The growth of suburban populations that are college-educated, affluent and more liberal in their voting has powered the state’s drift away from its historically conservative politics. Since 2005, Virginia has elected only one Republican governor — Bob McDonnell in 2009. In the 11 years since, no Republican has been elected to any statewide office.

Color-coded locality-by-locality or precinct-by-precinct elections maps across those years show a growing patch of Democratic blue against a vast, rural sea of Republican red. The urban and suburban blue patch, particularly over the past two decades, has gained sufficient population to outvote Virginia’s countryside with its steadily declining population punctuated only by islands of growth mostly around college towns and Roanoke.

Things could get even worse for rural areas next year after the state’s legislative and congressional district lines are redrawn in the once-per-decade reapportionment. It is required every year following the U.S. Census to make sure that districts have about the same number of people and to assure proportional representation in legislative bodies.

Rural Virginia’s losses were particularly easy to spot at the congressional district level after the 2011 reapportionment. Huge suburban population gains paired with a rural exodus expanded the geographic boundaries of rural districts while districts in suburban areas got more compact. The result is that more communities in the 9th, 6th and 5th districts were forced to share fewer representatives while metro-area districts such as the 8th, 11th, 10th and 3rd contracted geographically, giving those densely populated areas more U.S. House seats. The same thing happened with state legislative seats: suburbs got more of them, the rural areas got fewer.

Next year’s redistricting should not be as drastic as 10 years ago.

Northern Virginia population growth has slowed over the past 10 years. And while many rural communities continue to decline, the trend appears to be stabilizing as retiring Boomers and stressed families abandon townhouses and cookie-cutter planned communities for more elbow room and a more relaxed lifestyle. A Virginia Realtors analysis of recent Census Bureau estimates showed that of the 10 counties with the fastest rates of growth from 2018 to 2019, seven were outside the D.C. metropolitan statistical area. Among them were Louisa and Culpeper counties plus the cities of Staunton and Lexington — well outside the Urban Crescent.

It took decades for Virginia to shift from a state predominantly agrarian in culture and character to one dominated by cities, growing suburbs, and their white-collar communities. If Virginia’s small towns and countryside regain a measure of their former influence, that will take time, too.

Rozell is dean of the Schar School of Policy and Government at George Mason University and co-author of the book Federalism: A Very Short Introduction (Oxford University Press, 2019).

Let me say from the onset, before you call me a Grand Dragon from the Ku Klux Klan or the world’s biggest racist: Be it known that I do believ…

The Republican convention is right around the corner, and it’s our first step toward electing new leadership and making Virginia #1 in the nat…

I’ve been in and around the world of politics for many years, from teaching U.S. government to volunteering on Ronald Reagan’s campaign to rep…

Poss: Virginians should be excited about Esports betting

March Madness looked different this year for Virginia residents, and it wasn’t just because of the half-empty arenas. For the first time, fans…

My great-grandmother Helen Hambrick was born in 1858 in Rocky Mount, Virginia. Before she died on my fifth birthday in 1946, she told me how a…

SThese two maps show how Virginia’s population is changing. The top map, which shows population changes from 2000 to 2008, shows high growth in Northern Virginia-to-Richmond corridor (in red), but only a relatively small number of rural localities (in blue) lost population. Many rural localities in Southwest and Southside Virginia gained population, albeit slowly. However, since 2010, two things have happened. First, the state’s population growth growth has slowed, with only Loudoun County and new Kent County showing up in the high-growth red zone. However, the number of localities losing population has expanded to include virtually all of Southwest and Southside Virginia.