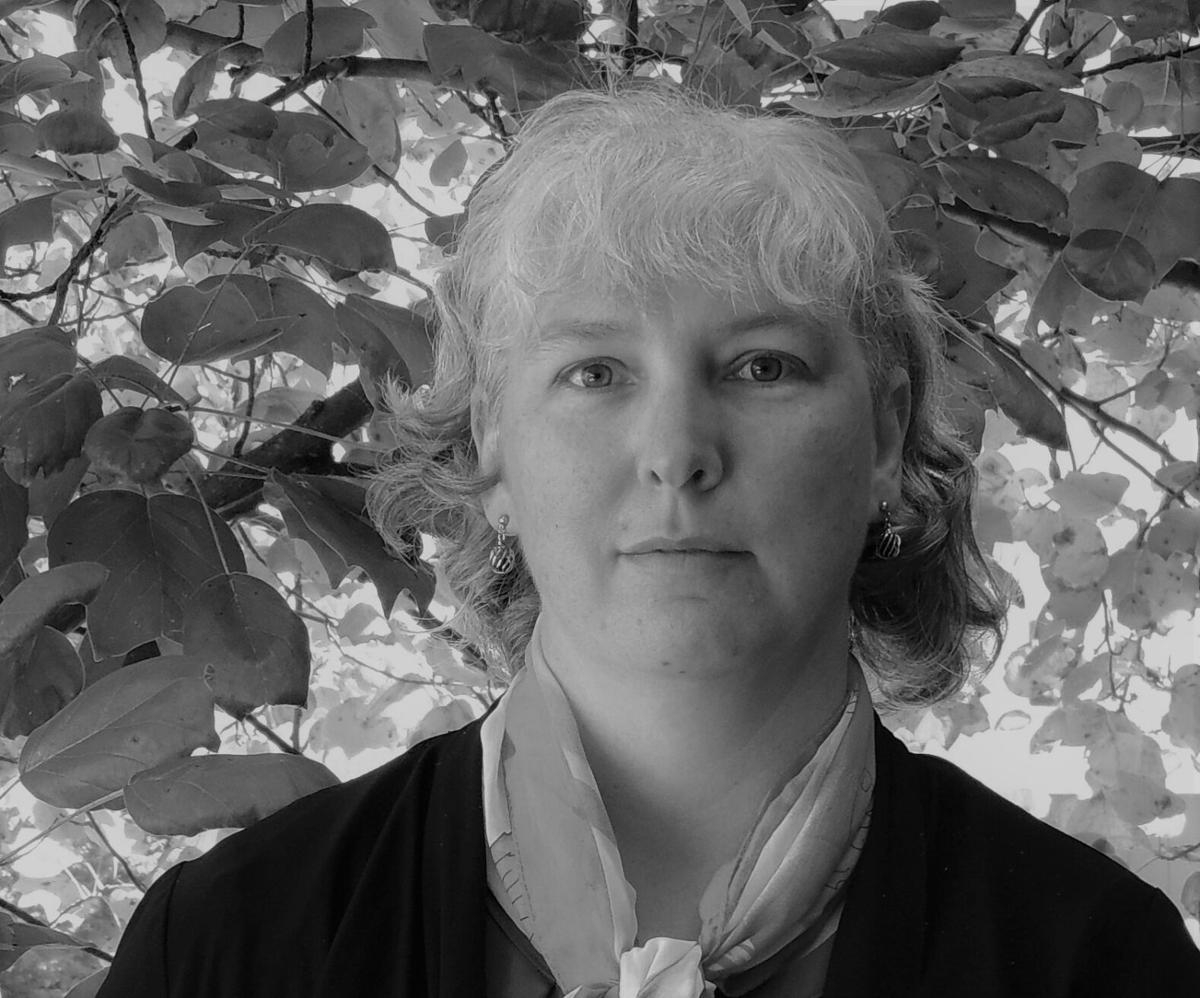 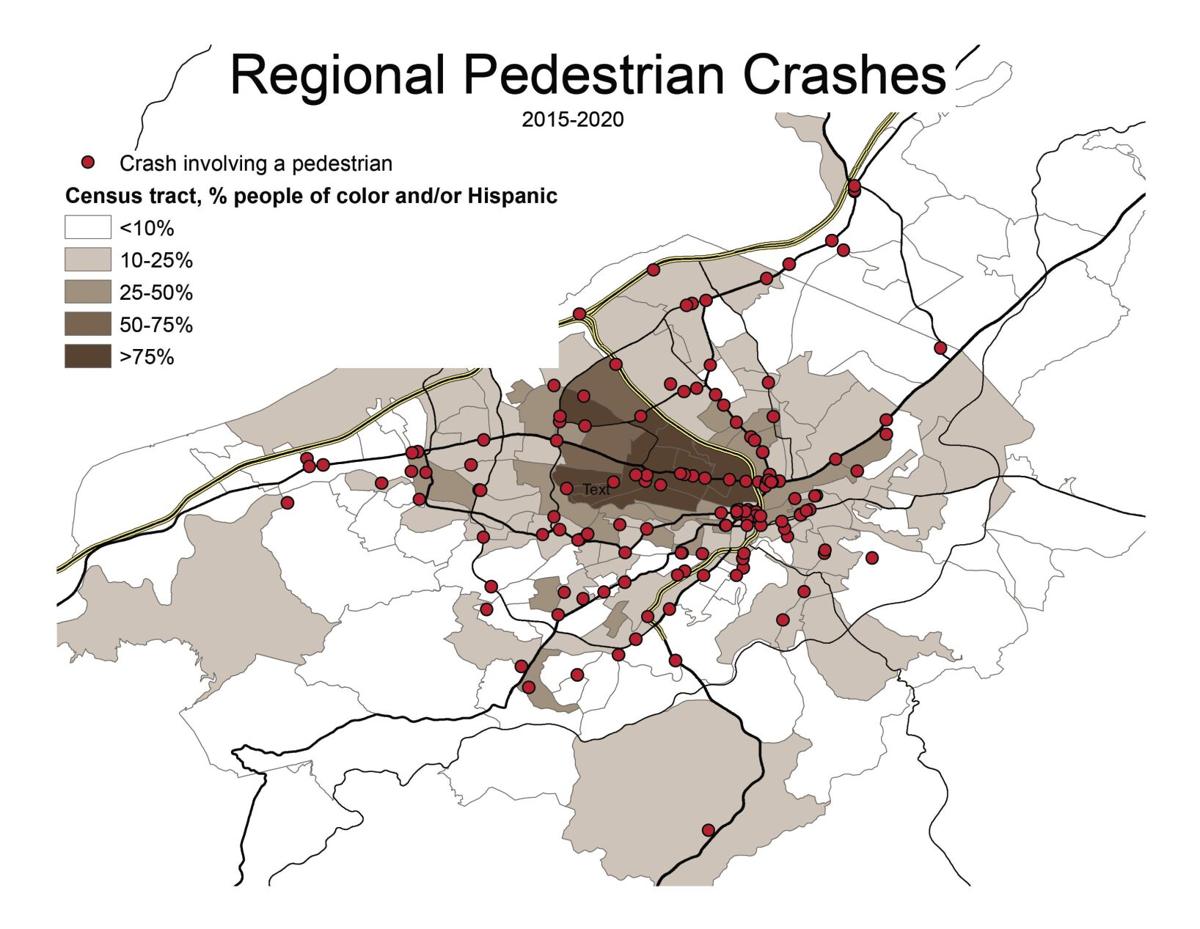 This shows the location of crashes involving a pedestrian in the Roanoke Valley between 2015 and 2020.

This is unexpected. In the past, the crash rate has risen when people drive more. When driving plummeted in the 2008 recession, traffic fatalities dropped too. As the economy rebounded, Americans drove more and traffic fatalities climbed.

The difference this last year is that driving decreased, but traffic fatalities didn’t. They increased.

Pedestrians are disproportionately represented in traffic fatalities and injuries

Traffic safety professionals say that pedestrians are “overrepresented” in traffic fatalities and injuries, meaning people walking are far more likely to get hurt or killed in a crash than we would expect, considering how many trips are made by walking.

Two percent of travelers in Roanoke are pedestrians, but almost half of the people killed (seven of 16) and one-quarter of the people injured (70 of 297) in 2020 were walking and the outlook for pedestrians has gotten worse in recent years.

In 2020, the number of pedestrian fatalities in Virginia was about the same (123) as in 2019 (126), but when you consider that less driving happened, the rate of pedestrian traffic deaths actually increased 17%.

The pandemic year was deadly for pedestrians in the Roanoke Valley. More pedestrians were injured (70) and killed (seven) in 2020 than in any year since 2013.

The burden is not shared equally.

Pedestrians who are people of color and/or with Hispanic ethnicity are at greater risk of being injured or killed in a traffic crash than other people. In Roanoke, most pedestrian crashes occur in neighborhoods where more than 10% of the population are racial or ethnic minorities.

There are many contributing factors, but one key suspect stands out: an increase in speeding during the pandemic.

Even if there are more crashes overall because of traffic congestion, they are fender benders with no injuries. Last year, with fewer people driving, there was less traffic congestion and therefore, faster (and deadlier) traffic speeds.

What are we doing about it?

The City of Roanoke launched a pedestrian safety campaign in 2020, “Every Corner is a Crosswalk,” and this year is focusing on traffic speed awareness with the “No Need to Speed” campaign.

Brandon Avenue, which is due for repaving, is getting a safety makeover which involved trying out temporary lane closures and a survey with hundreds of responses before the final design.

In 2020 alone, the City invested over $1 million in pedestrian safety improvements focused on intersection upgrades such as pedestrian push buttons, audible signals and more street lighting in the City Downtown and other pedestrian corridors like Williamson Road and 9th Street SE.

The Virginia Department of Transportation has two initiatives that should make a difference. Its Strategic Highway Safety Plan, Arrive Alive, is similar to a Vision Zero goal of zero traffic fatalities as the guiding principle of its transportation planning.

Its Pedestrian Safety Action Plan, created just a couple years ago and has already been updated, comes with funding to guide cities and counties to invest more in pedestrian safety. In the state legislature, a hands-free ban and removing a barrier for localities to lower speed limits may help.

Having local, regional and state plans and initiatives in place is important to take advantage of federal funding that will have a strong impact in reversing the trend of rising traffic fatalities.

Opinions are that of Ms. Ruhlen

Liebrecht: Then and now, Grayson County acts against best interest

One hundred and sixty years ago, small farmers from Appalachia marched off to fight for an economic system from which they derived no benefit,…

Glenn Youngkin looks like a nice guy, but his messages are disturbing. For example, he says schools should not teach students what to think, b…

Ketner: Congress should do right by rural Virginia families and extend the child tax credit

This year, Congress passed a transformational child tax credit that could cut child poverty in half in the United States. For rural Virginians…

Schapiro: Another distinction for a Va. history-maker, Mary Sue Terry

Mary Sue Terry, the first — and until Nov. 2, the only — woman elected statewide in Virginia has had seven careers.

In stripping most lawmakers of their power to draw legislative and congressional boundaries, Virginians last year believed they were dragging the dark art of redistricting into the sunlight. It’s about to be dragged back into the shadows.

It’s very easy these days to say that social media is toxic. People act in ways they’d never do in real life, because it isn’t real life. They…

This shows the location of crashes involving a pedestrian in the Roanoke Valley between 2015 and 2020.