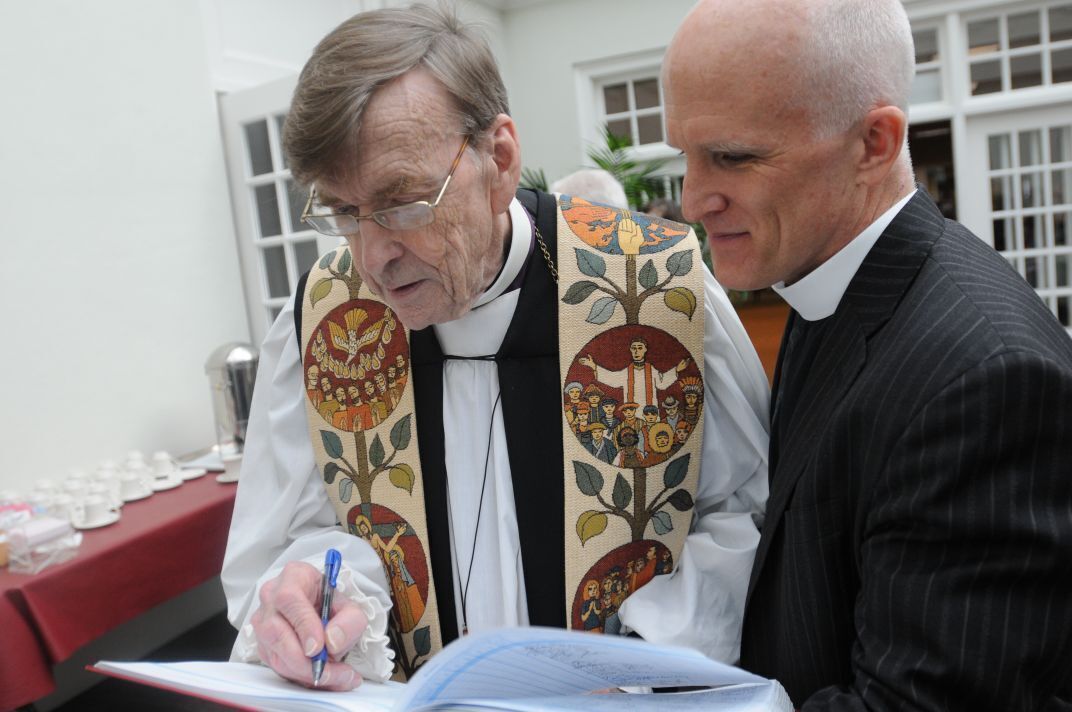 Retired Bishop John Shelby Spong, with then-Rector Wallace Adams-Riley looking on, signs a register of church services at St. Paul’s Episcopal noting his participation in a December 2015 service and commemoration of his 60 years of ministry. 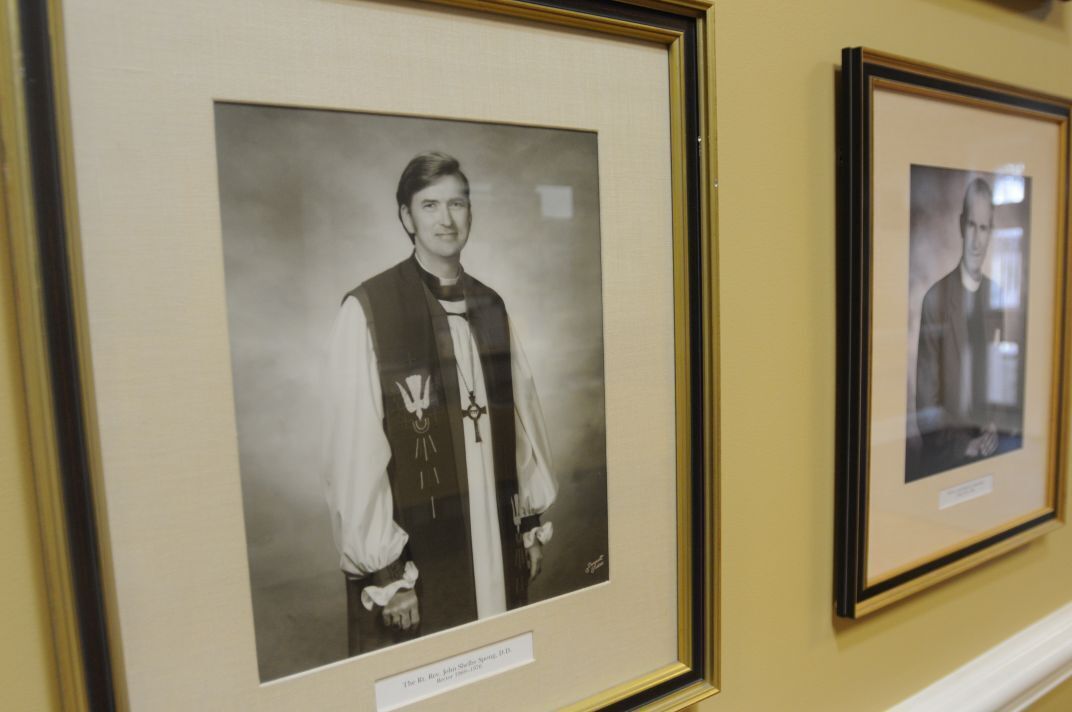 A portrait of John Shelby Spong from his tenure as Rector of St. Paul’s Episcopal Church

In his vision, women and LGBTQ people led communities of faith. Richmond’s races and denominations would move past difference in pursuit of social justice. And St. Paul’s Episcopal Church would divorce itself from its unholy marriage to the Confederacy.

At the so-called “Cathedral of the Confederacy” where Robert E. Lee and Jefferson Davis worshiped, Bishop Spong somehow ended its tradition of flying the Confederate flag on days honoring rebel heroes.

He lived to see St. Paul’s strip Confederate images from its walls, and see Richmond remove Confederate monuments from their pedestals, with a broader commitment toward racial equity.

The Richmond we are striving to become is harder to imagine without the influence of Bishop Spong, who died Sept. 12 in Richmond at age 90.

“I think he was enormously proud of what Richmond has become,” daughter Ellen Spong said Tuesday.

He moved people directly and indirectly. Some of his stances, such as the nonliteral interpretation of scripture, remain controversial; others, on LGBTQ rights and the rejection of the Lost Cause, are trending mainstream.

“Jack changed my life,” said Lee Switz, who moved to Richmond months after he became rector at St. Paul’s. “He made Christianity something I could embrace.”

“Jack made the Christian message relevant to the world as I saw it in 1970. He linked social justice and the Judeo-Christian message. He showed us young searchers emerging from the 1960s that the church we had grown up in could have meaning for our lives,” said Switz, who would become the second woman in St. Paul’s vestry at what was then the unusually young age of 32.

Bishop Spong has a similarly profound effect on Corey D.B. Walker, a theologian and former professor at Virginia Union University and the University of Richmond.

“He was a guiding light for me, particularly in seminary,” said Walker, now the Wake Forest (University) Professor of the Humanities.

Walker lauded Bishop Spong’s commitment to inclusivity and his recognition of the worth and dignity of all people.

That quality, Walker said, “is amazing and admirable, particularly in our moment when religion is being weaponized to divide and to deny the dignity of so many people.”

St. Paul’s historian Christopher Graham noted that Bishop Spong landed at one of the more conservative Episcopal churches in the South, yet somehow rallied its congregation to support civil rights.

Meanwhile, its community, social and interfaith outreach and “fresh theology” were “invigorating and popular and drew a lot of young people into the church,” Graham said.

Switz was one of them.

“He made people angry, and he loved it because it meant they were engaged. For those of us who were young, he made it OK to question, to seek answers, to bring civil rights, the war in Vietnam, the persistence of poverty in the richest nation in history to what it means to be a Christian,” she said.

“He planted the roots at St. Paul’s for our focus on social justice. If Christianity is for real, it needs to embrace the salient issues for each generation.”

The Rev. Ben Campbell said Bishop Spong “brought a lot of people into Christianity who were in retreat from fundamentalism. That really was important and gave a real energy to the church and Christianity in Richmond.”

This was a dynamic period in Richmond’s history. Bishop Spong’s tenure roughly coincided with a nadir of Richmond race relations — the city’s racially motivated annexation of a portion of Chesterfield County — and the Black political power that resulted from the subsequent lawsuit.

Before the pandemic, Bishop Spong and his wife could often be found on Wednesdays at Union Presbyterian Seminary, where he did research in the library and worshiped in the chapel to the pleasure of seminary President Brian Blount, who would introduce Bishop Spong to students only vaguely aware of his legacy

Campbell spoke of his pride at how the monuments came down and the voices and work that have emerged in Richmond. “He was a key part of it at a very critical time, and I think that was foundational for a lot of his future work.”

Today, we are a city interrogating long-held assumptions and seeking to right long-standing wrongs. Many heroes, sung and unsung, laid the groundwork. Bishop Spong was among them.

Much of the attention this election cycle has been focused on the races for governor, lieutenant governor, attorney general, and on the balanc…

Retired Bishop John Shelby Spong, with then-Rector Wallace Adams-Riley looking on, signs a register of church services at St. Paul’s Episcopal noting his participation in a December 2015 service and commemoration of his 60 years of ministry.

A portrait of John Shelby Spong from his tenure as Rector of St. Paul’s Episcopal Church