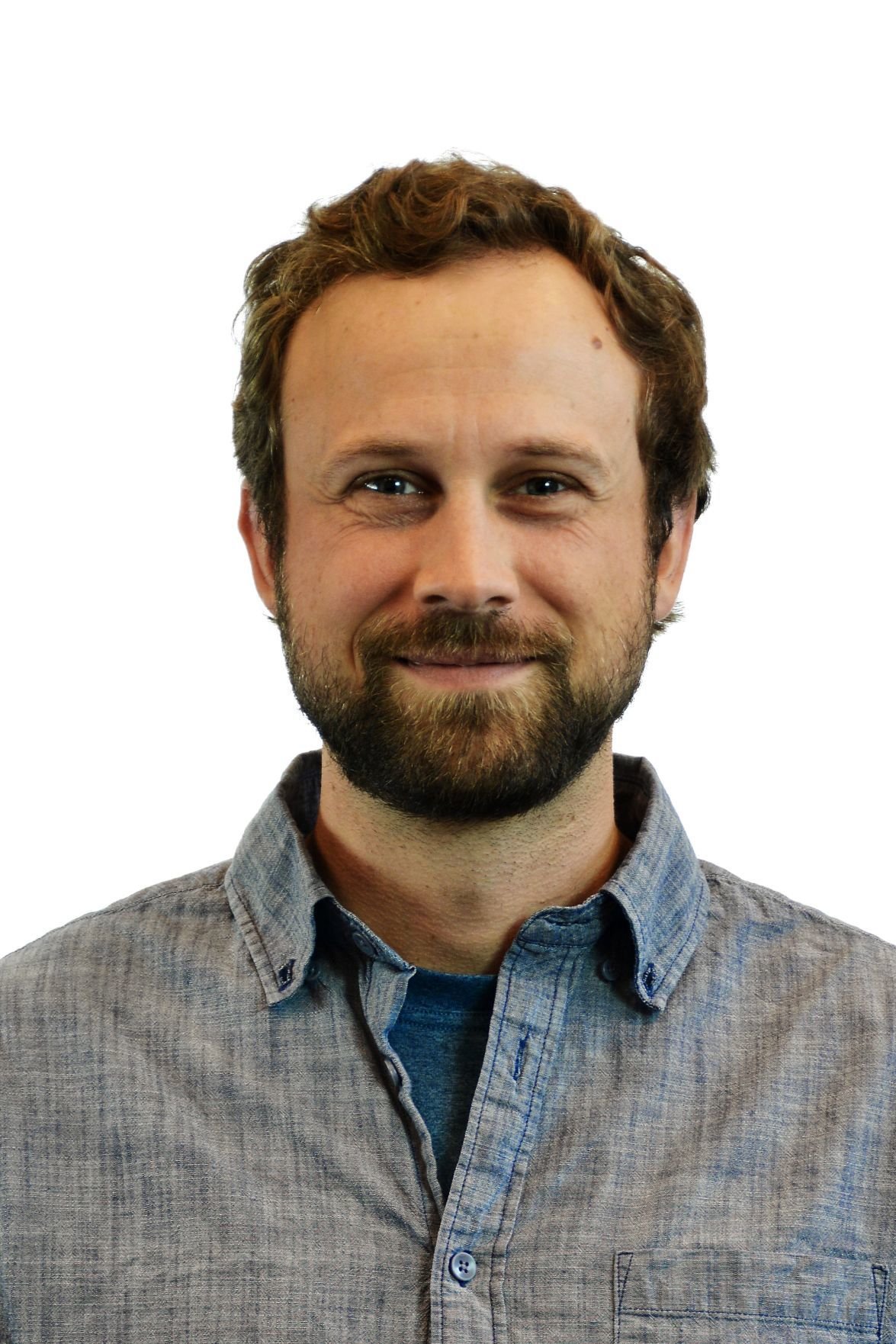 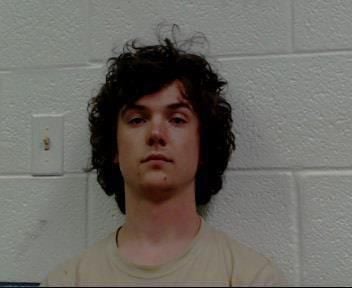 Holden Dometrius of North Carolina was arrested last month in Monroe County, West Virginia, after he chained himself to construction equipment for the Mountain Valley Pipeline. He has been charged with "threasts of terrorist acts," a felony. 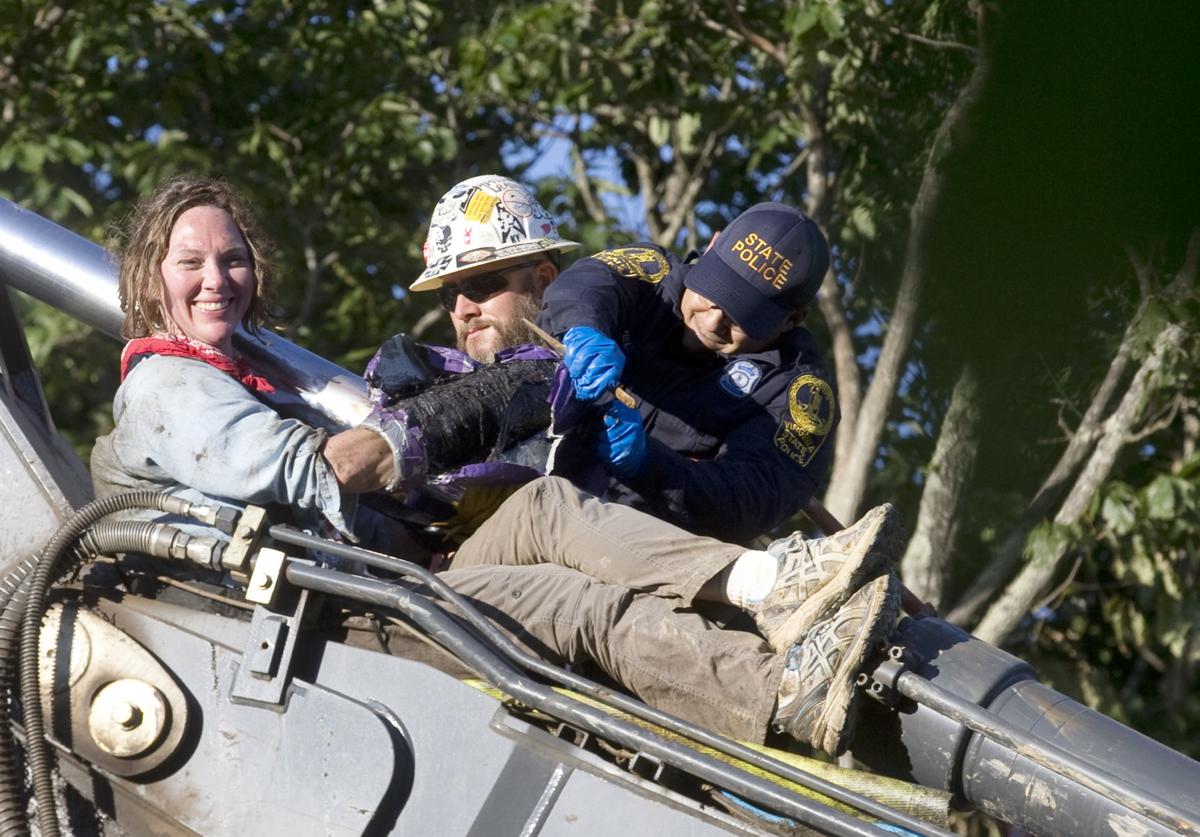 State police work to remove Virginia Tech professor Emily Satterwhite from excavating equipment along the Mountain Valley Pipeline route on Brush Mountain in Montgomery County in June 2018. She had been on the equipment for more than 14 hours. A North Carolina man who did the same thing in West Virginia in April has been charged with “threats of terrorist acts.”

Hileman is an environmental hydrologist with a Ph.D. from the University of California, Davis. He was raised in the Catawba Valley of Virginia, and is presently a researcher at Stockholm University working on global water sustainability issues.

“To hell with your permits.”

These five words recently adorned a non-violent protest that temporarily halted construction along a portion of the Mountain Valley Pipeline (MVP). Alarmingly, this phrase is likely the exaggerated pretense for bringing the felony charge of “threats of terrorist acts” against the protester, 22-year-old Holden Dometrius. While the threat of felony charges may ultimately prove to be only an intimidation tactic, this phrase will be used to paint a picture of reckless and steadfast disregard for authority by protesters, and perhaps even a call to lawless and violent actions.

Ironically, “to hell with your permits” perfectly encapsulates the ethos of MVP.

Since beginning construction on its titanic fracked gas pipeline last year, MVP has had five permits suspended, been charged with more than 300 violations, and is mired in a criminal lawsuit for building during a federally-mandated stop work order. Indeed, the actions taken by MVP seem to indicate it never intended to take the permits seriously. Nor does MVP have to — state and federal agencies have shown a willingness to change permit conditions on the fly to accommodate the pipeline.

Last June, the 4th U.S. Circuit Court of Appeals suspended Nationwide Permit 12 issued by the U.S. Army Corps of Engineers. The loss of this permit continues to prevent MVP from crossing 1,000+ streams and wetlands in Virginia and West Virginia. Yet recently, the West Virginia Department of Environmental Protection modified approximately fifty conditions to allow the Corps to reissue the permit. (Editor's note: The West Virginia Department of Environmental Protection advises: "That statement is incorrect. The WVDEP only modified three conditions under Nationwide Permit 12 – Conditions A, C, and L. There are over 50 conditions in the 401 certification to the U.S. Army Corps of Engineers’ nationwide permits, but the WVDEP only made changes to three of the conditions.")

Not one month later in July, the same court suspended the permit issued by the U.S. Forest Service that gave MVP permission to cross the Jefferson National Forest. The agency had failed to give reasonable consideration to the erosion and sedimentation that would result. While the Forest Service has not yet reissued revised permit conditions, it continues to ignore Freedom of Information Act requests on the topic.

In early January, the Virginia Marine Resources Commission published a request from MVP to begin exploring “time of year restriction” waivers for 26 stream crossings in and around cold water trout fisheries. Because of delays during the first year of construction — the original in-service date for the pipeline has already elapsed — MVP is keen to bypass restrictions on when and where it can build, despite currently lacking the ability to cross any streams in the absence of Nationwide Permit 12.

In March, the Virginia Water Control Board took the extraordinary step of reconsidering its issuance of the 401 Water Quality Certification, which allows MVP to construct in Virginia’s “upland” areas — essentially everywhere except for stream and wetland crossings. Prior to the meeting, MVP claimed the board did not have authority to revoke the permit, and threatened to simply ignore the board’s decision. After meeting behind closed doors for several hours, the board unanimously decided to leave the permit in place, giving no apparent explanation for its dramatic reversal. Might the state have lost standing in its ongoing suit against MVP, putting in jeopardy the thousands, or even millions, of dollars the state stands to reap from past and future environmental violations?

Permits are issued by our public agencies, with conditions developed in consultation with experts and the public at large, to ensure development projects are undertaken safely, with respect to local communities and the environment, and within the law. Through seeking changes to the permits themselves, rather than addressing the underlying construction and design flaws that led to the suspension of permits, MVP has shown a reckless disregard for anything and anyone that stands in the way of its increasingly distant finish line. That it has been able to do so with impunity, and with the aid of complicit agencies, needs to be seen for what it is: structural violence imposed upon rural communities in Virginia and West Virginia. These communities have not only been sacrificed through being placed on the route of MVP, but now must sacrifice any and all oversight they trusted regulatory authorities to duly enforce.

Protesters like Mr. Dometrius advocate for the rational and just application of the law; a blind justice where both David and Goliath are treated as equals. None of these protesters have sought ad hoc changes to the legal architecture around their cases to engineer exceptions that place them outside the boundaries of what was previously impermissible. If they had, such attempts by themselves and their associates to render the law – the institutional bedrock of society – meaningless might rightly be considered threats of terrorist acts.

Updated May 23 with revised figures from West Virginia Department of Environmental Protection.

Holden Dometrius of North Carolina was arrested last month in Monroe County, West Virginia, after he chained himself to construction equipment for the Mountain Valley Pipeline. He has been charged with "threasts of terrorist acts," a felony.

State police work to remove Virginia Tech professor Emily Satterwhite from excavating equipment along the Mountain Valley Pipeline route on Brush Mountain in Montgomery County in June 2018. She had been on the equipment for more than 14 hours. A North Carolina man who did the same thing in West Virginia in April has been charged with “threats of terrorist acts.”