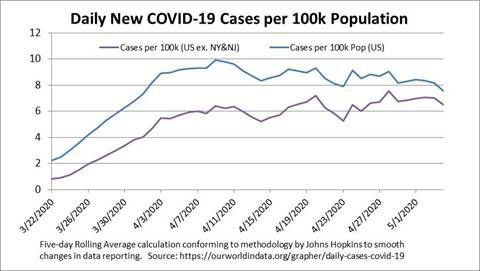 Chart 1: This chart shows what the U.S. COVID-19 rates would look like without New York and New Jersey. 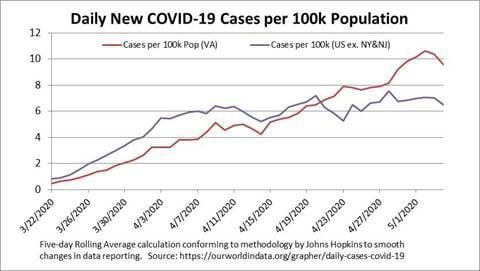 Chart 2: This compares Virginia to the U.S. if New York and New Jersey are left out of the data. 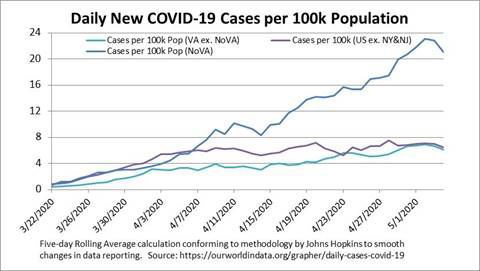 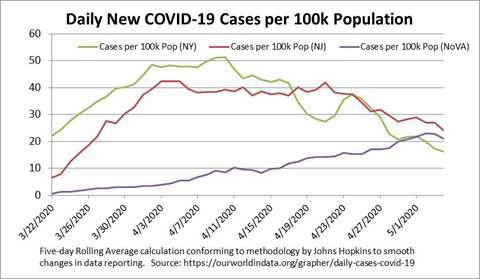 Derek Klock Klock is a professor of practice of finance in the Virginia Tech Pamplin College of Business.

Klock is a professor of practice of finance in the Virginia Tech Pamplin College of Business.

The early models predicting 20+ million infections and nearly 1 million fatalities have thankfully been incorrect, so far. We are now a nation with multiple epicenters, frazzled nerves and little patience. New York City captured our attention and is mercifully passing the worst; but new outbreaks in care facilities and food processing plants and other more rural locations aren’t getting the same airtime and that could cause complacency.

At a national level we seem to be moving through a rolling peak. (See chart 1). Looking at that chart, one can see stabilization since about the beginning of April. After excluding New York and New Jersey statewide cases, the lower line for the same time shows a slight increase contrary to the slight decrease typically reported to represent the national picture. This leveling, at around 7 cases per 100k people, still equates to approximately 23,000 new cases per day nationally. So what are we to believe? Are we decreasing or still increasing? We are still increasing nationally. The hope is to keep the rate of change low enough to quickly head off any major outbreaks.

On a Virginia level, the story is becoming less rosy even as we prepare for phase one opening. Chart 2 compares our current trend to that of the national data without the NY/NJ epicenter. When we compare the trend for Virginia, it is clear that our new cases are still solidly increasing and have recently peaked at over 10 cases per 100k people. If this were the complete picture, it would seem that Virginia is not ready to reopen. But again, the data can paint many pictures depending on how it is viewed. Since we looked at the U.S. without New York/New Jersey, what does Virginia look like without Fairfax, Arlington, Alexandria and Price William? Reviewing chart 3 we find the slope is similar to the whole state data in that it is still increasing albeit at a slower pace. But what is more apparent is that our recent peak is much lower, at about 7 cases per 100,000 people, and very similar to the US without NY/NJ. So what is going on? Northern Virginia is now swamping the state case data in a similar fashion as New York and New Jersey swamped national data, because these four locales in NoVA represent approximately 45% of all Virginia cases.

So how does our epicenter in Northern Virginia compare to the one in New York and New Jersey? The pattern, shown in chart 4, seems pretty clear. The case rate of a shade over 20 cases per 100k people in Northern Virginia is nowhere near the original severity of NY/NJ. However, its current rate exceeds the current rate in New York and is just behind New Jersey. I’m not a virologist or a doctor of any sort, but it does not appear Virginia is in an ideal situation, based on either trend or level of new cases, to be considering any resumption of normalcy, at least not on a statewide level. I’m sure that our leaders are looking at the same data and in a similar light, but they have to weigh the continued effect this shut-down has on the economy and livelihood of our citizens. This cannot continue to be a one-dimensional decision. But just as the remainder of the nation doesn’t need to follow the same severity of restrictions as the New York City metro area did, the rest of Virginia probably does not need to follow the same severity of restrictions as our epicenter in Northern Virginia.

When the state reopens, whether state-wide or just certain areas, one thing is for certain – continued, even enhanced, caution is crucial to restarting the economy. No one like wearing a mask, maybe Zorro or the Phantom of the opera, but for now it is the best thing for our physical and fiscal health.

Streahle: Roanoke, move forward with your blueprint for climate resilience

Last week, Sen. Joe Manchin shut down an ambitious legislative package designed to curb the impact of the climate crisis, which has caused an …

Kiran: An open letter to Montgomery County Board of Supervisors

Chart 1: This chart shows what the U.S. COVID-19 rates would look like without New York and New Jersey.

Chart 2: This compares Virginia to the U.S. if New York and New Jersey are left out of the data.