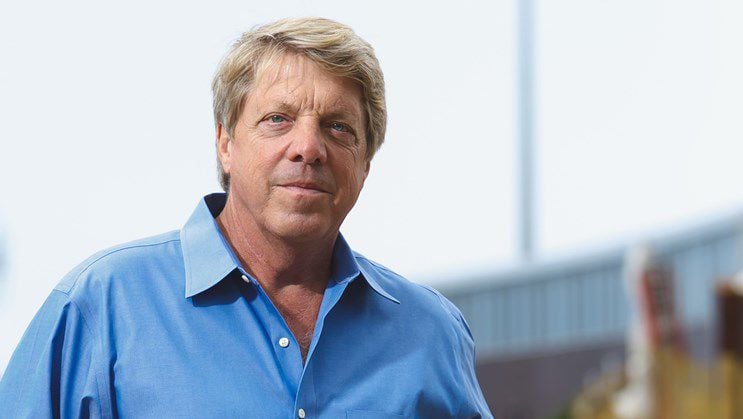 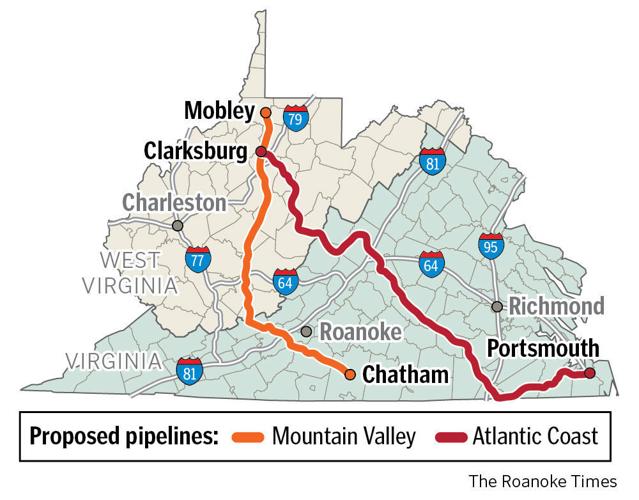 The routes of the Mountain Valley and Atlantic Coast pipelines. The latter would also continue on into North Carolina.

Wagner is a Republican state senator from Virginia Beach.

Those who follow the debate about the Atlantic Coast Pipeline closely are probably familiar with the environmentalist refrain that the pipeline is “not needed.” We have all the pipelines and natural gas we could ever need or want, they say.

Don’t believe it for a second. It couldn’t be further from the truth. I’ve been in politics a long time — long enough to know that just because someone repeats a lie over and over again doesn’t make it the truth. I give environmentalists credit for doing their best to protect our natural resources, but that doesn’t mean they know the first thing about our economy or our energy needs.

The truth is the Atlantic Coast Pipeline is absolutely critical to the economic future of Hampton Roads and the environmental health of our entire region.

Virginia Natural Gas is the local utility that serves 300,000 homes and businesses in Hampton Roads. They heat our homes, power our businesses and serve Naval Station Norfolk.

In 2018 alone, Virginia Natural Gas had to shut off gas service to Norfolk Naval Station multiple occasions. Why? Because we don’t have enough pipelines or natural gas in Hampton Roads to serve homes, businesses and the naval base at the same time. Our local utility has to throttle service to the U.S. Navy and hundreds of other large industrial customers just to keep homes and hospitals warm.

Our military bases are not only vital to our national security. They’re also critical to the Hampton Roads economy.

We’re living in the “BRAC era,” Base Realignment And Closure. Communities like ours all across the country are competing against each another to save our bases as the military goes through historic downsizing. If we want to make Naval Station Norfolk “BRAC-proof” and if we want to keep our naval base and the multi-billion dollar economy it supports — we need new pipeline infrastructure to serve it.

If we don’t build the Atlantic Coast Pipeline to help serve our military bases, we could be next on the chopping block. It’s that simple. There are plenty of other U.S. military bases with reliable access to natural gas.

Not having reliable pipeline infrastructure threatens another major economic driver in Hampton Roads — the Port of Virginia. The Port and the Virginia Maritime Association are taking serious steps to bring Liquefied Natural Gas (LNG) bunkering service to the Port to serve international shipping vessels. It’s the wave of the future and would be a huge economic windfall for our region. Most international shipping fleets run on dirty diesel fuel. New international environmental regulations require ocean going ships to convert to cleaner forms of fuel. Converting to LNG slashes carbon emissions by one-third and most air pollution by almost 90 percent, so it would also be a huge environmental windfall.

Without the Atlantic Coast Pipeline, the Port doesn’t have a chance at bringing LNG bunkering to Hampton Roads. We’re competing with New York, New Jersey, Savannah, Jacksonville, and major ports around the globe. If we don’t move fast, we’re going to miss our opportunity and the tens of thousands of jobs it would bring.

We’ve missed out on other economic opportunities already because of our outdated or non-existent pipelines. Just ask economic developers in Suffolk. In just the last ten years, we’ve lost out on more than $2 billion in new manufacturing because our local utility couldn’t guarantee natural gas service to new companies looking to locate here.

We’re missing out on opportunities to improve our environment, too. Tens of thousands of homes in Hampton Roads still run on dirty heating oil. It produces one-third more carbon than natural gas and even more sulfur and nitrogen pollution. That’s bad for our climate, our air quality and our Chesapeake Bay. Think of the environmental progress we could make if these homes could switch to cleaner natural gas. It won’t happen without the Atlantic Coast Pipeline.

Environmentalists don’t like to talk about it, but Dominion Energy has reduced its carbon emissions by 50 percent since 2000. If you’re a Dominion Energy electric customer, your carbon footprint is at least half of what it was twenty years ago. That’s all because clean natural gas has replaced dirty coal over the last two decades.

Dominion Energy wants to go even further and reach a 60 percent carbon reduction by 2030, but they can’t do it without the Atlantic Coast Pipeline. The infrastructure just isn’t there, and we can’t get the supplies we need into Virginia.

At this critical juncture for the Hampton Roads economy, we must protect our military assets, continue to build up our port, diversify our economy with new manufacturing opportunities, and bring clean burning natural gas to our homeowners in Suffolk, James City County, Gloucester and large parts of Chesapeake.

Hampton Roads urgently needs the Atlantic Coast Pipeline. Our economic and environmental future depends on it.

From groceries to gas and back-to-school supplies to child care, Americans across the country are facing major budget crunches. Many families …

The routes of the Mountain Valley and Atlantic Coast pipelines. The latter would also continue on into North Carolina.