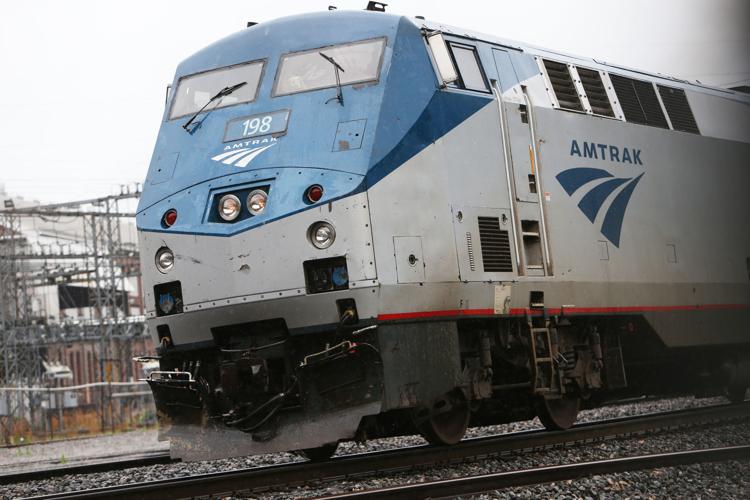 Amtrak returned to Roanoke in 2017 — and plans have now been approved for the service to be extended into the New River Valley, and expanded service for Roanoke. 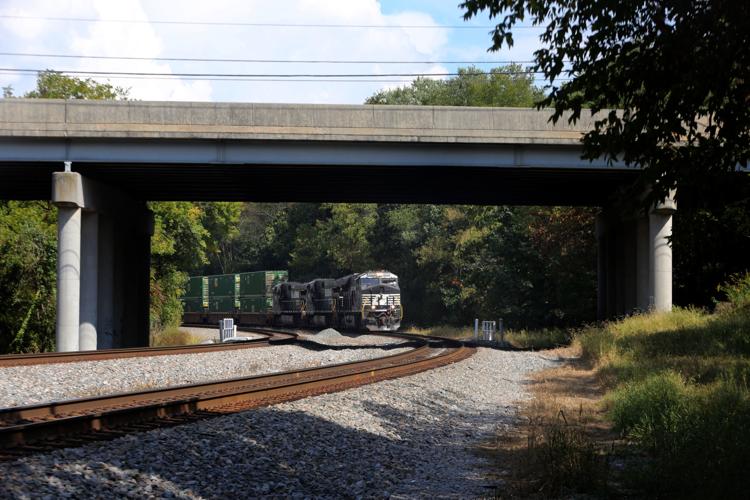 A Norfolk Southern freight train passes beneath the North Franklin Street bridge in Christiansburg, near a site for a proposed Amtrak passenger rail station to serve the New River Valley. 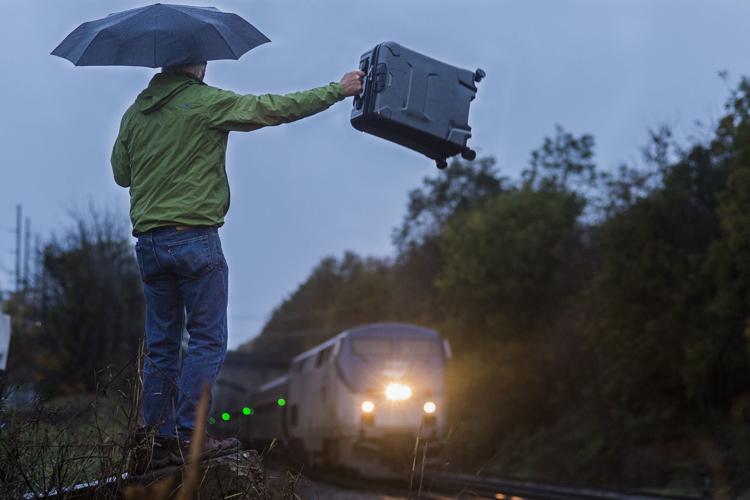 An Amtrak train from Roanoke passes as Bill Piatt waves a luggage case to show support for the addition of a stop in Bedford. 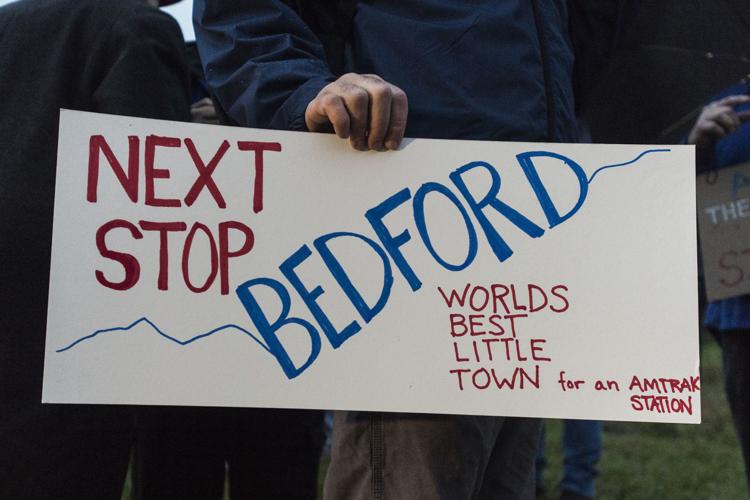 A man holds a sign showing his support of the addition of an Amtrak stop in Bedford on Nov. 9, 2017. 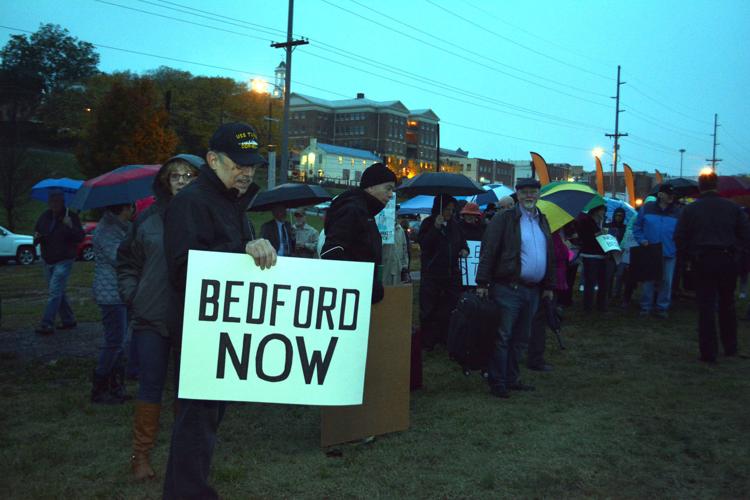 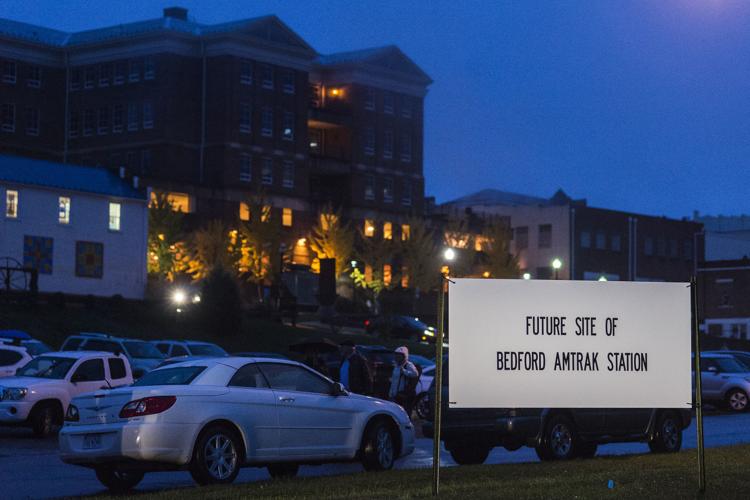 Illuminated by car headlights, a sign advocating a new Amtrak station was displayed in Bedford. 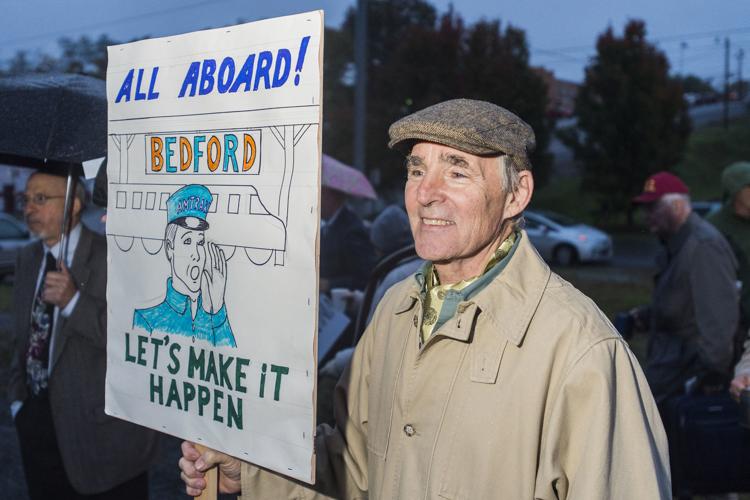 Tim Edwards holds a sign showing his support of the addition of an Amtrak stop in Bedford on Thursday Nov. 9, 2017.

How far is it from Christiansburg to Bristol?

Google Maps says 113.8 miles, so perhaps that difference of 1.8 miles is a reason not to trust the internet for everything.

We’ll offer a different answer. The distance from Christiansburg to Bristol is 42 words.

The state budget that the General Assembly approved last month accounts for $141 billion to be spent over two years but our focus today is on those 42 words that don’t have a single dollar attached to them — yet.

They come on page 532, under the Department of Transportation, section E: “As a part of the initiative described in subsection B.1. of this item, the Secretary of Transportation shall provide an assessment of both the total project costs and incremental costs resulting from (i) the extension of intercity passenger rail to Bristol, Virginia; and (ii) modelling conducted to assess any infrastructure or network costs needed to service a rail station in Bedford, Virginia to the Chairs of the House Committee on Appropriations and the Senate Committee on Finance and Appropriations no later than November 15, 2021”

OK, that’s more than 42 words, but those first 42 are the ones we’ll focus on and put into layman’s language: For the first time, the state budget officially lays out the goal of extending passenger rail to Bristol. The attention this time was on getting passenger rail to Christiansburg. Gov. Ralph Northam proposed $50 million to make that happen — and add a second train on that route. The legislature upped that to $83.5 million and created a passenger rail authority in the New River Valley. For the former, we should tip our hat to Del. Terry Austin, R-Botetourt and Sen. Emmett Hanger, R-Augusta, who served on the conference committee that worked out the final details of the budget. For the latter, we should acknowledge Del. Chris Hurst, D-Montgomery, and Sen. John Edwards, D-Roanoke. Interestingly, that $83.5 million matches what the state is spending on the Virginia Railway Express commuter service in Northern Virginia; a useful baseline for future expenditures on our side of the state.

Since Amtrak extended service to Roanoke in 2017 — with the state paying some of the bill to make that happen — the line has proved exceedingly popular. It has the best ridership of any state-supported rail line in Virginia (223,000 passengers in the pre-pandemic year of 2019) and is the only one where revenues exceed expenses — which is definitely not what would have been expected of a route outside the urban crescent. Back in 2008, then-Del. Morgan Griffith, R-Salem, expressed doubt that a train to Roanoke would make money. “I do think there will be a day when it’s appropriate. I just don’t think we’re there yet,” he said. Well, guess what? We’re there now.

The success of that extension from Lynchburg to Roanoke has prompted three things. First, Bedford wants a station so the train will stop there. Second, the New River Valley wants a train to go there. Third, so does Bristol. The second will now happen and the other two look more likely to happen. “This is huge,” Austin says, “a whole lot larger than people understand.”

Almost from the time that people started talking about a train to Roanoke, some also talked about a train to Bristol. The 2008 Statewide Rail Plan mentioned a Bristol route as a “future phase,” one of those phrases that sometimes seems a way to pacify people without actually giving them anything. When David Bowers was mayor of Roanoke, he often pushed the idea of rail service to Bristol. Ralph Northam talked up a Bristol route during his 2017 campaign for governor and told the Bristol Herald Courier that extending passenger rail to the state’s southwest border was a “logical step.” All fine words, but, realistically, nothing was going to happen until passenger rail got extended to the New River Valley. Now that that’s been set in motion — although there’s still no date yet — it’s time to actually take some action. And this budget does that, calling for a formal estimate of costs by Nov. 15 — a pretty tight time line where government is concerned.

For this language, we can thank — once again — Austin and Hanger (who had the advantage of being budget conferees) as well as state Sen. Todd Pillion, R-Washington, who represents Bristol and has long been a rail advocate and persuaded Austin and Hanger to champion Bristol’s cause in the budget negotiations. The city hasn’t had passenger rail service since 1971. “With all we have to offer now and the future casino and resort development, Bristol is ripe for ridership,” Pillion says. This also fits into the goal of trying to reduce congestion on Interstate 81.

We know a few things already: A 2019 study estimated the cost of upgrading the rail lines between Roanoke and Bristol at $30 million. Given the distance involved, that’s pretty cheap. Compare that to the cost of getting the train over Christiansburg Mountain. After that, most of the route is pretty straight. The main obstacle, of course, is Norfolk Southern’s well-known reluctance to allow passenger trains on its tracks, although money can solve a lot of problems. There may be a lot of it available, too. Some of the money for the Christiansburg extension comes from federal dollars provided as part of coronavirus relief — a one-time expenditure used on a one-time expense to upgrade Norfolk Southern’s tracks so the passenger trains aren’t slowing down its freight traffic. We don’t know quite yet how the $1.9 trillion in the new coronavirus bill will wind up being spent but we know President Joe Biden’s administration has been pushing for the kind of infrastructure spending that President Donad Trump often talked about but never delivered. You need not like Biden to be able to figure out that there might be federal money available to upgrade those tracks to Bristol. This is what’s called “a window of opportunity.”

“We need local governments to promote it all the way down” to Bristol, Austin says. So here’s your prompt. A train to Bristol is no longer just a talking point, it’s an official study point in the state budget, and not as part of some “future phase,” but as part of the next phase. It’s not quite time to shout “all aboard,” but it is time for local governments in Southwest Virginia to let their state and federal counterparts know they want to get on board.

The U.S. Supreme Court last year issued a potentially devastating ruling for communities beleaguered by gun violence, striking down New York’s law regulating concealed weapons in public. The ruling employed the controversial legal theory of constitutional originalism: interpreting the Constitution based strictly on the original understanding of its text at the time it was adopted.

The picture that recently graced the Patrick County Republican website was either an incompetent attempt to disguise Ku Klux Klan symbols within an image of the GOP elephant or a picture that included pieces of pachyderm poop. Either way, an arguably symbiotic relationship exists between both the racist hate group and excrement.

If one word applies to the massive reduction in damages that racists, anti-Semites and neo-Nazis will pay for organizing and carrying out the deadly Unite the Right rally, it is appeal.

One wonders whether an alternate universe exists in which Virginia got the best of Glenn Youngkin, rather than the version we have in this rea…

Guest editorial: A deal to help South Africa is a breakthrough for the world

Amtrak returned to Roanoke in 2017 — and plans have now been approved for the service to be extended into the New River Valley, and expanded service for Roanoke.

A Norfolk Southern freight train passes beneath the North Franklin Street bridge in Christiansburg, near a site for a proposed Amtrak passenger rail station to serve the New River Valley.

An Amtrak train from Roanoke passes as Bill Piatt waves a luggage case to show support for the addition of a stop in Bedford.

A man holds a sign showing his support of the addition of an Amtrak stop in Bedford on Nov. 9, 2017.

Illuminated by car headlights, a sign advocating a new Amtrak station was displayed in Bedford.

Tim Edwards holds a sign showing his support of the addition of an Amtrak stop in Bedford on Thursday Nov. 9, 2017.