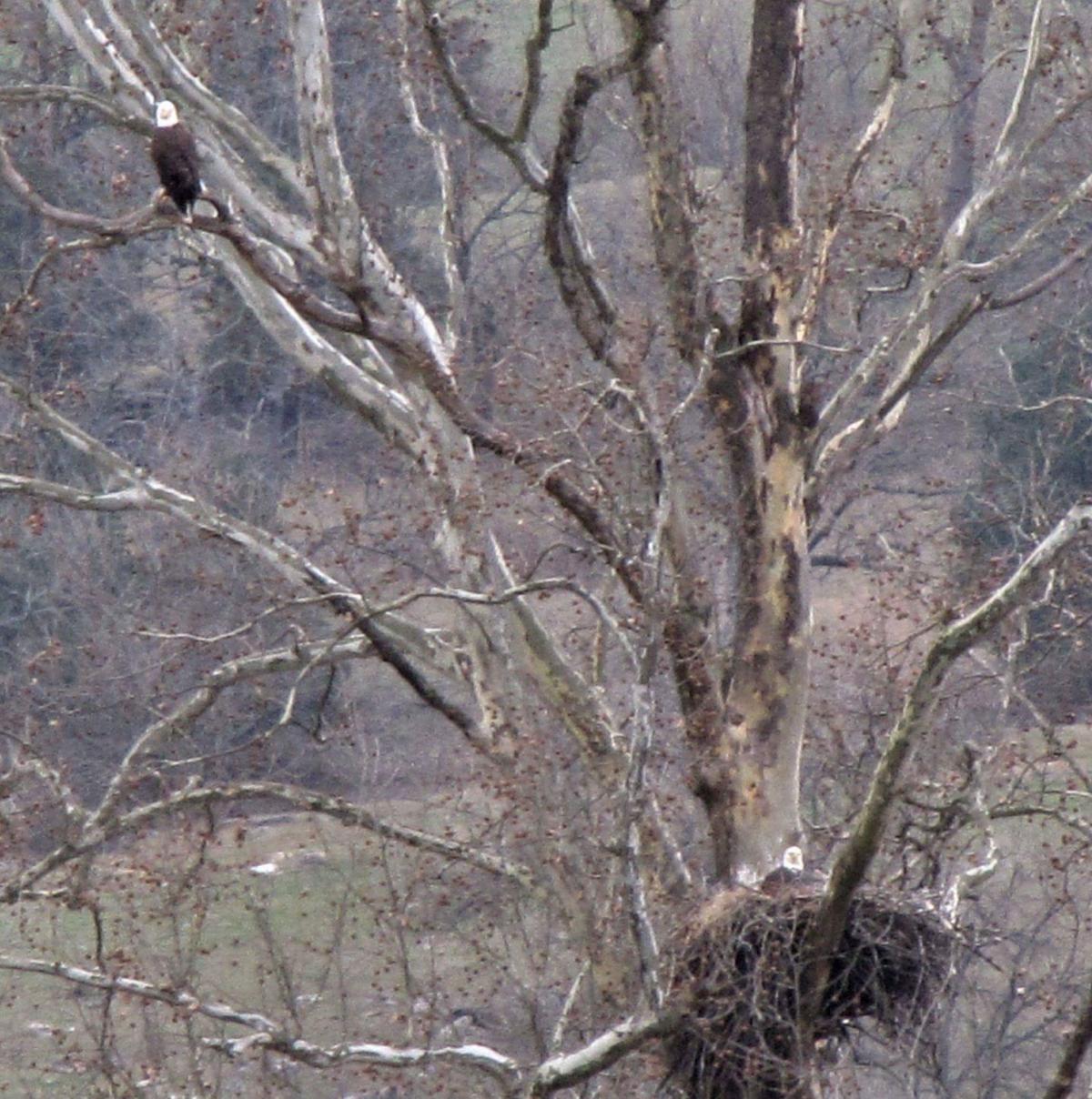 Two bald eagles nesting in Botetourt County. This is somewhat unusual, because they’re not near a large body of water, which eagles usually prefer. However, eagles are now becoming so numerous that some are taking up residence in locations that once would have been less than ideal. Our editorial at left looks at why we’re now seeing so many bald eagles in this part of Virginia.

A bald eagle in Botetourt County feasts on something.

The talk among folks in central Botetourt County lately has been about the eating habits of one of their neighbors.

That happens when you live out in the country and your neighbor decides to chow down on fresh venison in the front yard where everybody can watch.

It also happens when that neighbor is a bald eagle.

A few weeks ago, a flurry of Facebook posts showed a bald eagle scavenging from roadkill along Country Club Road. Patches Johnson Inge of Troutville was so excited that she stopped in the middle of the road to take some photos, backing up traffic in the process. Her son took the photos to class, where they instantly became a teaching lesson for his first grade class at Roanoke Valley Christian School.

They also are a teaching lesson for the rest of us, too.

While this sighting may be new to those who witnessed it, bald eagles have actually been back in the Roanoke Valley for at least 13 years now. And that’s where the real lesson lies.

The great raptor has captivated the imagination since our earliest times. There are 31 Bible verses that mention eagles, although they differ markedly in tone. Leviticus 11:13 calls the eagle “an abomination” and commands followers not to eat its flesh. Psalm 103:5 is more praiseworthy: “thy youth is renewed like the eagle’s.” Other passages simply use eagles as a metaphor, referencing their speed or wingspan or dominance of the sky.

The bald eagle native to North America was certainly dominant enough that it was a popular motif in many native cultures, and, in time, the national symbol of the United States. Benjamin Franklin was, famously, not fond of eagles. “He is a bird of bad moral character,” Franklin wrote. “He does not get his living honestly,” because eagles sometimes simply steal food from other weaker birds. Others, though, admired the eagle for its strength and looked past how the bird acquired that strength. It’s no accident that the most common nickname for sports teams in the United States is, according to the Mascot DB website, the Eagles. Or that the first manned landing on the moon came in spacecraft named The Eagle, which meant the first words spoken from the surface of the moon were: “The Eagle has landed.”

Despite America’s love affair with eagles, we also nearly killed off the bird. During the 20th century, the bald eagle population in the lower 48 states plummeted. (Alaska was always the exception and there are no bald eagles in Hawaii.) By the early 1960s, when Rachel Carson released her landmark book “Silent Spring,” there were just 417 nesting pairs left in the lower 48.

There were many culprits, but one big one was the pesticide known as DDT. The compound was wildly efficient at killing off bugs and became quite popular with farmers after World War II. Unfortunately, it was also quite efficient at killing off other things, too. The poison worked its way up the food chain to eagles. DDT didn’t kill eagles outright, but it interfered with the bird’s metabolism, weakening their egg shells to the point where they couldn’t hatch, or rendering some birds sterile. For eagles, the environmental movement almost came too late.

At that point, there were just 26 nesting pairs in Virginia, mostly on the Northern Neck, where the Potomac River and Rappahannock River flow into the Chesapeake Bay. Bald eagles generally like to be around large bodies of water. More fish to be found, or, Franklin noted, stolen from other birds.

In the 46 years since the EPA banned DDT, bald eagles have made a stunning recovery, both nationally and in Virginia. Nationally, bald eagles were deemed so numerous that in 2007 they were taken off the list of threatened and endangered species. In Virginia, the eagle’s rebound has been exponential. Where there were once only 26 nesting pairs in the early 70s, there are now more than 1,000, according to The Center for Conservation Biology, a joint project of the College of William and Mary and Virginia Commonwealth University.

Most of those are still along the Chesapeake Bay, but director Bryan Watts says the bay is now so “overflowing” with eagles that they’re starting to push inland. Nesting pairs have been spotted as far west as Pennington Gap in Lee County. (You can look up some of the known nests at https://ccbbirds.org/maps/#eagles.) Earlier this year, the West Virginia Department of Natural Resources counted 40 bald eagles in that state; in the 1990s, there were none. “We’re sort of in a golden age,” Watts says, with eagles now being seen in places “where we haven’t seen them since colonial times.”

The Western Virginia Water Authority reports there’s been a nesting pair of eagles at Carvins Cove for the past 13 years; they presently have four young birds. There is also a breeding pair at the Spring Hollow reservoir that has produced at least one offspring. Botetourt County residents have posted photos of an eagle’s nest in a sycamore tree on private property somewhere in the central part of the county. It’s said to have been there several years now. The eagle lately seen scavenging along Country Club Road — and sometimes out on busy U.S. 220 near the Greenfield Center — might be one of those birds. In any case, the Botetourt nest is notable because, while it’s near a creek, it’s not near a large body of water.

That, Watts says, is a clear sign of the eagle’s rebound. “We’re starting to see birds in other, more unusual landscapes,” he says. If there’s not a lake around, then sometimes a series of farm ponds will do. Or, sometimes, roadkill out on the highway.

The eagle’s comeback ought to be a source of American pride, but we shouldn’t forget how it happened: As a result of some political decisions that were quite controversial at the time. One of the government’s own scientists, Herbert O. Calvery, had warned against the side effects of DDT as early as 1944. Nonetheless, the government made the pesticide available for public sale in 1945 anyway. The fight against DDT then went on nearly three decades before the EPA finally banned it. Even then, the chemical industry sued to overturn the ban, before losing in federal court.

Two bald eagles nesting in Botetourt County. This is somewhat unusual, because they’re not near a large body of water, which eagles usually prefer. However, eagles are now becoming so numerous that some are taking up residence in locations that once would have been less than ideal. Our editorial at left looks at why we’re now seeing so many bald eagles in this part of Virginia.

A bald eagle in Botetourt County feasts on something.