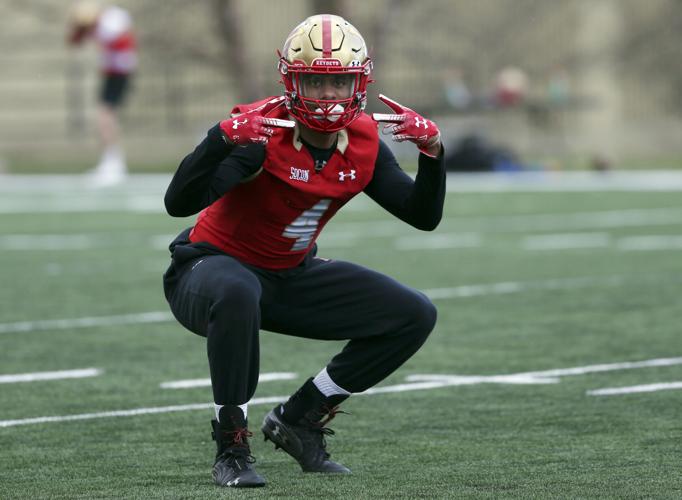 VMI senior free safety A.J. Smith has recorded 44 tackles and one interception this season. He also has broken up two passes for VMI, which can clinch the Southern Conference title and an automatic FCS playoff bid Saturday. 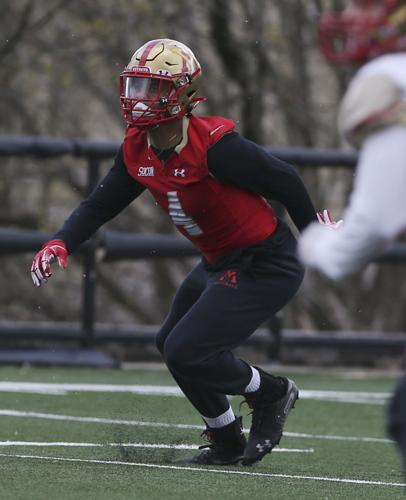 VMI free safety A.J. Smith had 67 tackles and three interceptions as a junior, when he made the All-Southern Conference first team. He has 44 tackles and one interception for VMI (5-1, 5-1) this season. 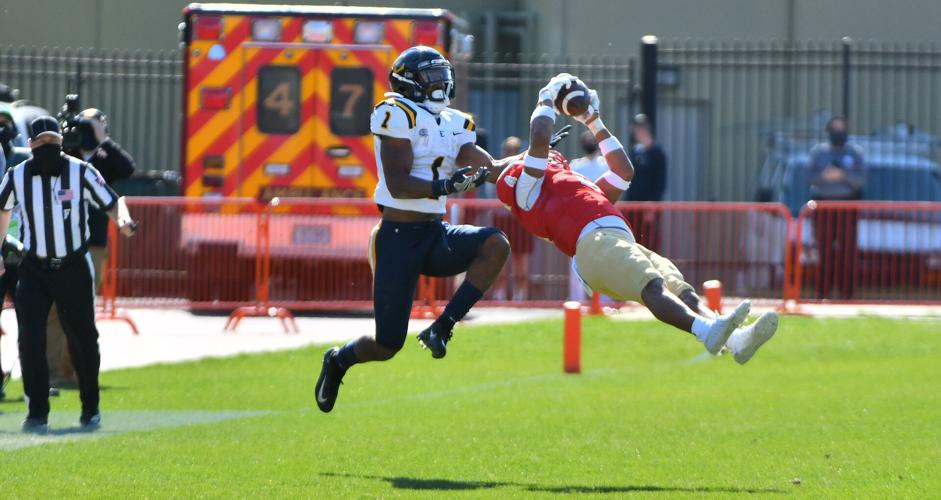 VMI senior free safety A.J. Smith (right), shown picking off a pass against East Tennessee State earlier this month, has helped the Keydets rise from a winless team in 2017 to a playoff contender this spring. 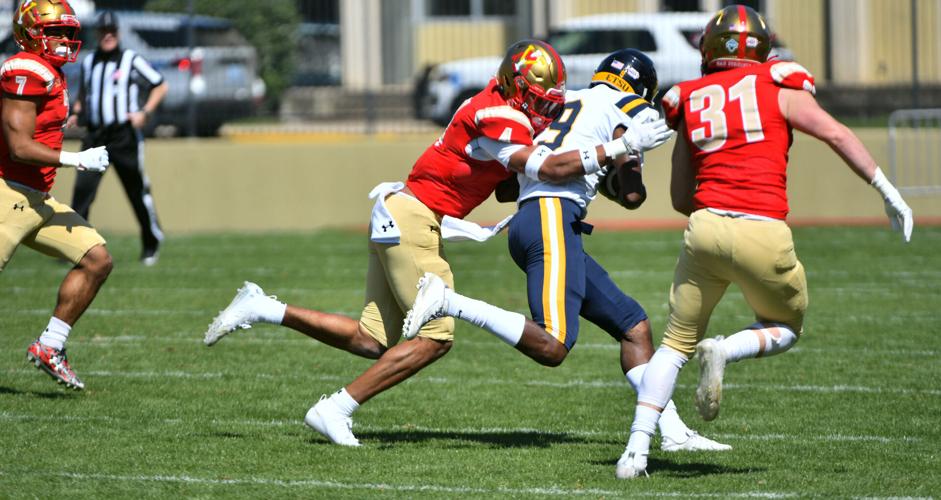 VMI senior free safety A.J. Smith (center left), shown making a tackle in a loss to East Tennessee State this month, has entered the transfer portal in hopes of finding a school to join as a graduate transfer in the fall. 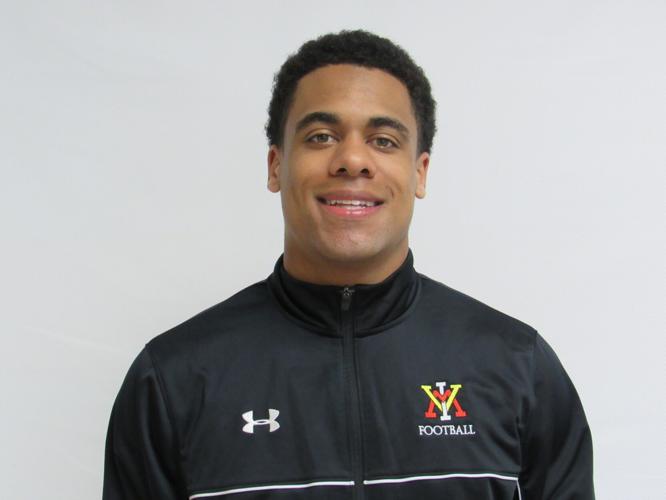 As a VMI freshman, A.J. Smith was part of a winless team.

As a senior, he is on a team that is one win away from making the FCS playoffs for the first time.

“I don’t think I could have asked for a better turnaround and a better progression throughout my years,” the free safety said in a recent phone interview.

“Starting from where we did to being in this position is kind of the epitome of the school I go to. From the Rat Line to the senior class, it really comes to fruition if you work hard and you stick with it.”

The 15th-ranked Keydets (5-1 overall, 5-1 Southern Conference), who have clinched their first winning football season since 1981, will host archrival The Citadel (2-9, 2-5) in Saturday’s regular-season finale. A win will give VMI its first SoCon crown since 1977.

Smith helped make that transition happen. He has started for VMI since his freshman season.

“It’s a good feeling when you can be a leader on the team and know that part of what you do actually helps the team and builds success,” said Smith, who earned All-SoCon first-team honors as a junior.

He is glad he picked VMI, despite the challenges of attending a military school.

“I wanted to do something that I could tell my kids about that would be totally memorable,” he said. “This place just offers such a unique experience.

“Now I have so many stories, so many funny, exciting things to tell them about this school.”

So what will he tell his future kids about VMI?

“Definitely about this football season,” he said.

He not only played safety for Frank W. Cox High School but also started at quarterback as a senior.

“He told us, basically, he wasn’t interested,” VMI coach Scott Wachenheim said. “[But] it got to the point where Liberty filled up before A.J. Smith made his decision. All of a sudden, there was some interest.”

The 6-foot-2, 204-pound Smith had two uncles who served in the military, so he was intrigued by VMI.

He verbally committed to VMI in January 2017. Wachenheim figured he could play safety or outside linebacker and might even work as a QB in the Wildcat formation.

“I did come here thinking I could play a little quarterback, at least get some Wildcat packages,” Smith said. “I tell my coaches to this day, even though I haven’t played quarterback in five years, I’ve still got my arm if they ever needed me.”

He was offered an academic scholarship by Virginia after he committed to VMI, but he stuck with the Keydets.

Smith has shined academically at VMI. He was named a second-team Academic All-American as a sophomore and made the academic all-district team as a junior.

“I always wanted to do the best I can in both football and academics,” he said.

Smith said he has a 3.0 GPA. He plans to graduate next month with a degree in mechanical engineering.

“He goes as hard as he does on the football field in the classroom,” his father, Kevin Smith, said.

Smith made 48 tackles and broke up two passes as a VMI freshman in 2017, earning a spot on the SoCon all-freshman team.

“I had to look at the mirror and say, ‘How are we going to the change the direction of the team?’ It starts with yourself,” Smith said.

Being a VMI student is not easy, but he stayed put.

“Quitting never really crossed my mind,” he said. “It was more of a pride thing. Once I started something, I would hate the fact that somebody was like, ‘Oh, you quit. You couldn’t make it.’”

“He’s very competitive and ambitious, so once he made a decision, he was sticking to it,” his mother, Kimberly Cox, said.

And what has Smith’s experience as a Black cadet been like?

“Anywhere you go, … there’s always going to be people that don’t like you for whatever reason,” he said. “I’ve made bonds here with people that transcend race.”

Smith said he did experience one instance that was “a little racist” when he was a freshman, but he declined to elaborate.

“It was a bad person. … It was an isolated incident,” he said.

After the 2017 season, Wachenheim asked the players to come up with a mission statement. The team adopted Smith’s suggestion, which was “Ten Toes Down.”

“I’d heard it in a song one time and I thought it was a good representation of what we wanted to get done for the next couple years,” Smith said. “When things go backwards or no matter what opponent we face or no matter what struggles we might face throughout VMI, we’ll never back down. We’re going to face it … with all 10 toes in the ground, with all our determination and grit and brotherhood.”

Smith shared the team lead in tackles (90) as a sophomore. He also broke up three passes and recorded a sack.

The Keydets went 1-10 that year, with the one win coming against a Division II team.

But Smith and company pulled off a stunning turnaround the following season.

Smith had 67 tackles, broke up four passes and tied for second in the SoCon with three interceptions. He earned All-SoCon honors from both the coaches and the media.

The Keydets did not play last fall because of the coronavirus pandemic, but this has been a surprisingly successful spring.

VMI opened its season by beating then-No. 10 Furman 14-13 for its first win over a ranked foe since 2002. The Keydets cracked the FCS Top 25 polls last month for the first time in their history. And for the first time since 1960, the Keydets won their first five games.

“Through all the things we’ve been through, like COVID and … you haven’t put pads on and played somebody in over a year, and then to go out and beat Furman the way we did, there’s some mysterious factor at force here that allowed us to be able to play,” Smith said. “I was just out here having so much fun, competing and playing.”

“He’s been really good his whole time here,” Wachenheim said. “He’s very smart and he studies tape and knows how to fit in the run game. We play predominately run teams, so we position our safeties to help us stop the run.”

“That’s how I feel most connected to the game, is … to be in the pile, to stop a ball-carrier from advancing,” he said.

The Keydets are allowing an average of just 21.0 points.

“We kind of have a swag to us,” Smith said of the defense.

Smith and the other seniors will be recognized before Saturday’s home game against The Citadel. But Saturday might not be the end of Smith’s VMI football career.

“[Making the playoffs] wasn’t even part of our goals and now … that could happen,” Smith said. “I told you I’d have stories to tell my kids.”

This spring might not be the end of Smith’s football career. The NCAA has given all Division I fall-sports athletes an extra year of eligibility.

VMI does not have a graduate school, so Smith will have to transfer to use his extra year. He entered the transfer portal prior to this semester in hopes of finding a school he can play for as a graduate transfer in the fall.

He said he has talked to a handful of FBS and FCS teams but has not made a decision yet.

Wachenheim said any school would be fortunate to have him.

“You’re not going to get a better man or a player with more character than A.J. Smith,” Wachenheim said.

The Hokies are the No. 3 overall seed.

Details on the attendance figures for Virginia Tech's 2022 spring game...

Karl Kuhn is the subject of an investigation by the RU human resources department and by the RU office of institutional equity, according to two people who were interviewed by the school.

No. 5 Virginia Tech beats No. 7 Louisville for record-breaking series win

"I wasn't really focused on throwing a no-hitter," she said.

The sophomore left fielder is batting a team-high .406.

In the region: No. 3 Virginia Tech beats Duke for record-breaking win

Plus basketball, wrestling and more.

US Soccer reaches equal pay agreement for men and women

US Soccer reaches equal pay agreement for men and women

VMI senior free safety A.J. Smith has recorded 44 tackles and one interception this season. He also has broken up two passes for VMI, which can clinch the Southern Conference title and an automatic FCS playoff bid Saturday.

VMI free safety A.J. Smith had 67 tackles and three interceptions as a junior, when he made the All-Southern Conference first team. He has 44 tackles and one interception for VMI (5-1, 5-1) this season.

VMI senior free safety A.J. Smith (right), shown picking off a pass against East Tennessee State earlier this month, has helped the Keydets rise from a winless team in 2017 to a playoff contender this spring.

VMI senior free safety A.J. Smith (center left), shown making a tackle in a loss to East Tennessee State this month, has entered the transfer portal in hopes of finding a school to join as a graduate transfer in the fall.