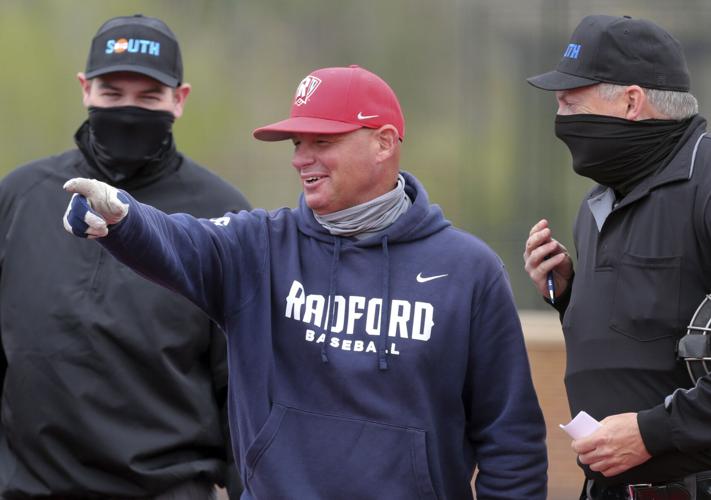 Then-Radford University baseball coach Karl Kuhn meets with umpires prior to the start of a 2021 doubleheader. Kuhn resigned his Radford job in June. He was named the pitching coach at Charleston Southern on Wednesday. 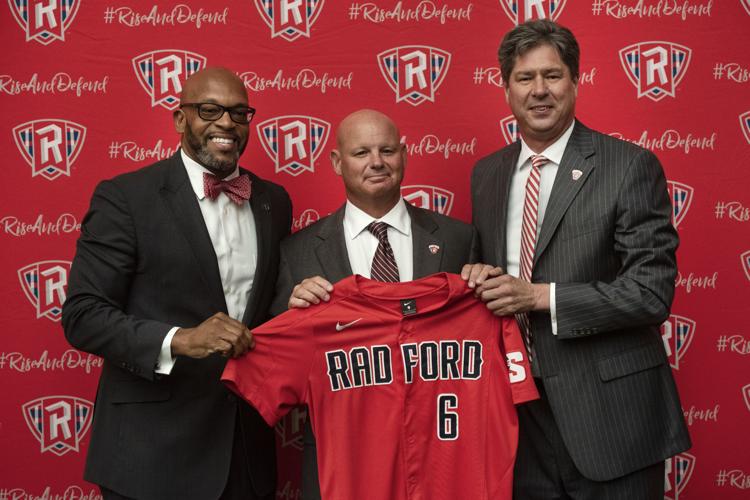 Karl Kuhn will be coaching in the Big South Conference next spring after all.

Radford announced on June 3 that Kuhn, who steered the Highlanders the past three seasons, had resigned. He had five years left on his contract.

The Roanoke Times reported three months ago that Kuhn was the subject of an investigation being conducted by Radford University’s human resources department and the university’s office of institutional equity, according to two people who were interviewed by the school. One of those two people had said he was told by investigators that the inquiry was in response to new allegations involving Kuhn related to this year. But he was told that the panel also was interested in learning about Kuhn’s actions at Radford in prior years.

Karl Kuhn is the subject of an investigation by the RU human resources department and by the RU office of institutional equity, according to two people who were interviewed by the school.

Thirteen members of the 2021 team complained about Kuhn in April 2021 to officials of the Radford athletic department, seven players who were in that meeting told The Roanoke Times last year. Players shared their stories of what they characterized as mental, verbal and physical abuse during that April 2021 meeting.

The RU investigation and the Kuhn resignation also came one year after former players complained about Kuhn to The Roanoke Times. According to 2021 phone interviews by The Roanoke Times with 11 ex-Radford players who were on the team during the 2019-20 and/or 2020-21 school years, Kuhn created what they described as an atmosphere of mental and verbal abuse that occasionally turned physical. But the university administration stood by Kuhn last year.

Thirteen members of the 2021 team complained about Kuhn in a meeting with school officials.

Kuhn will now be working for Charleston Southern coach Marc MacMillan, whose team went 24-30 overall and 13-11 in the Big South this year.

Charleston Southern athletic director Jeff Barber, MacMillan and Kuhn could not be reached for comment Thursday.

MacMillan said in Wednesday’s news release that he has known Kuhn for almost 20 years.

Kuhn spent 16 seasons as the University of Virginia’s pitching coach before being hired as Radford’s head coach in August 2019.

Brian Hemphill, who was the president of Radford University when Kuhn was hired, left Radford last summer to take the same position at Old Dominion.

Hemphill praised Kuhn in Charleston Southern’s news release Wednesday, calling him a “dear friend” and an “incredible person who is driven by his family values.”

When Kuhn resigned, the Radford press release at that time stated that “according to Kuhn, he has accepted an opportunity to consult on an open-ended contract with a private entity.” That press release quoted Kuhn as saying that “going forward, this is an opportunity to be part of baseball on a broader scale but also ‘catch up’ with my family.”

Radford University announced the resignation Friday of baseball coach Karl Kuhn, who was the subject of a university investigation.

Then-Radford University baseball coach Karl Kuhn meets with umpires prior to the start of a 2021 doubleheader. Kuhn resigned his Radford job in June. He was named the pitching coach at Charleston Southern on Wednesday.