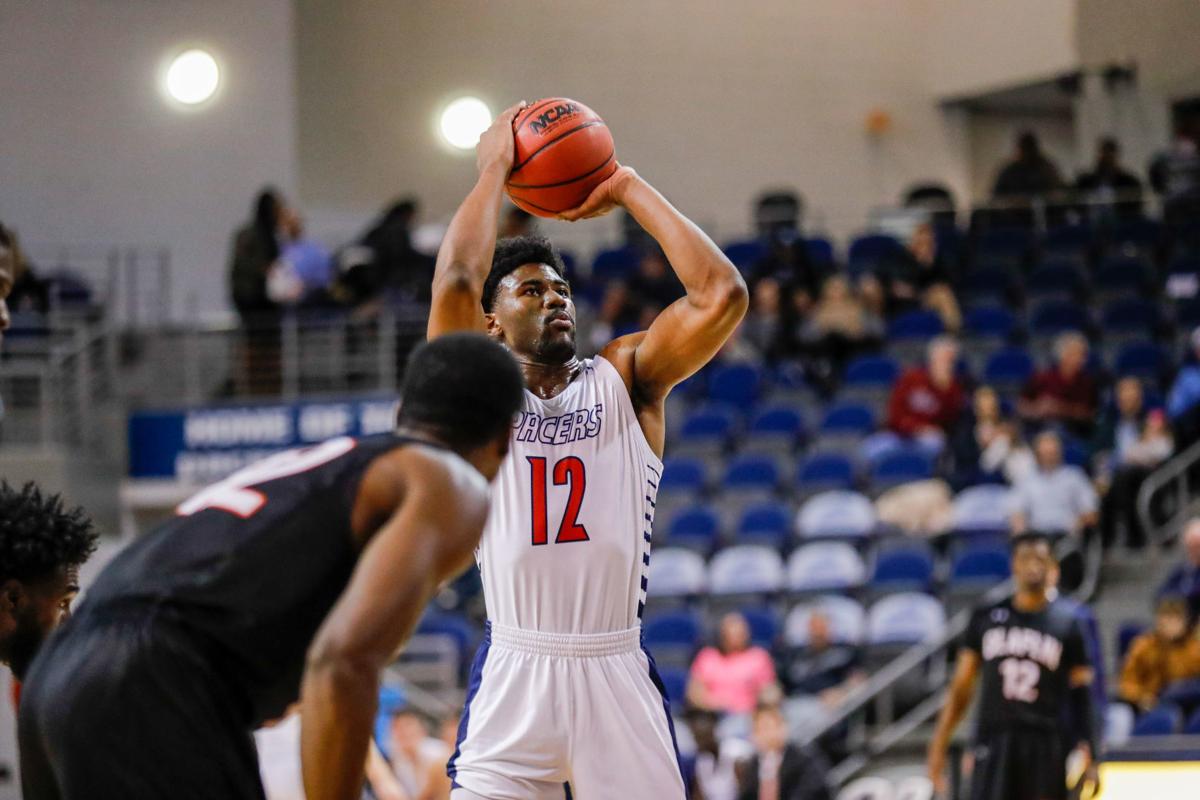 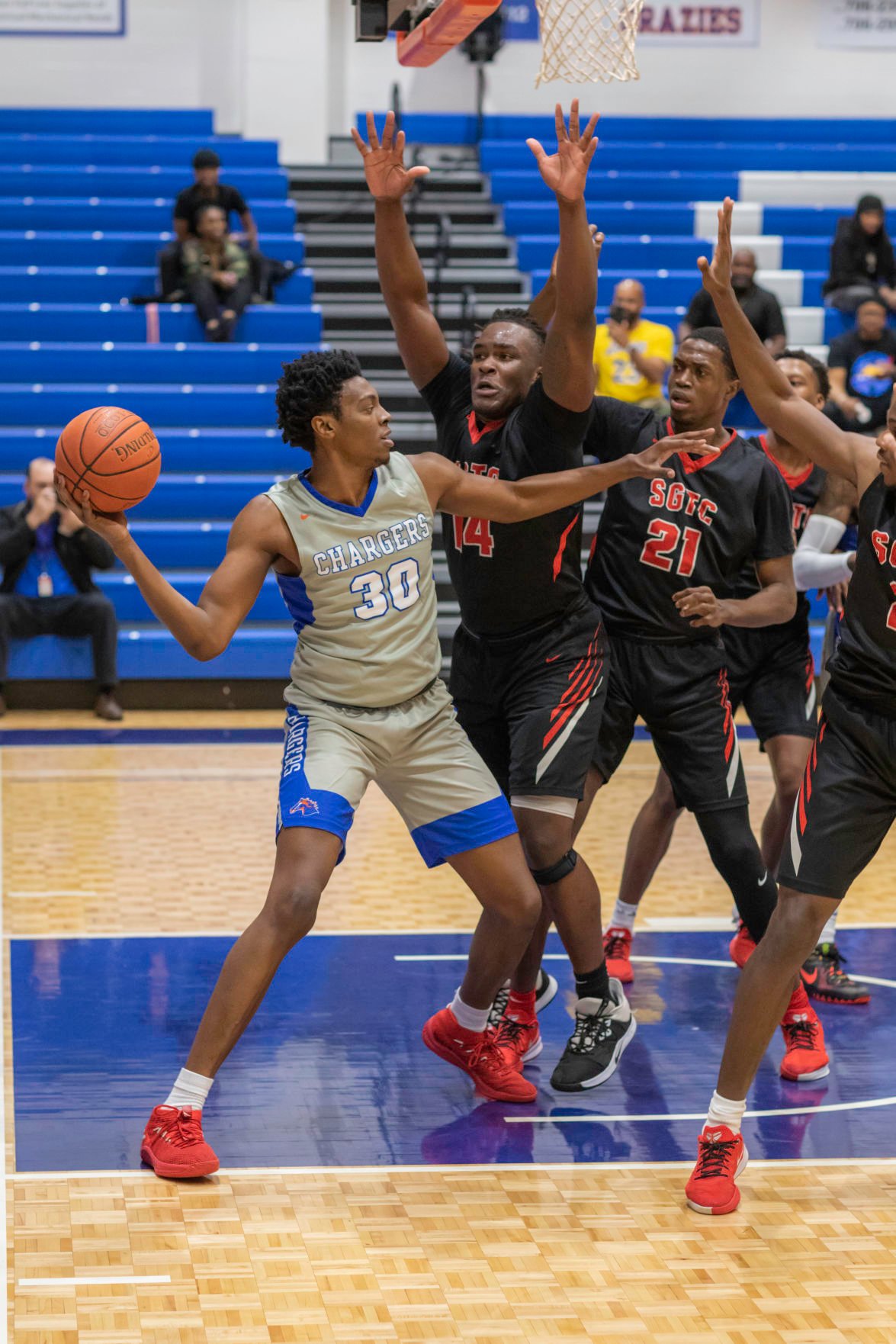 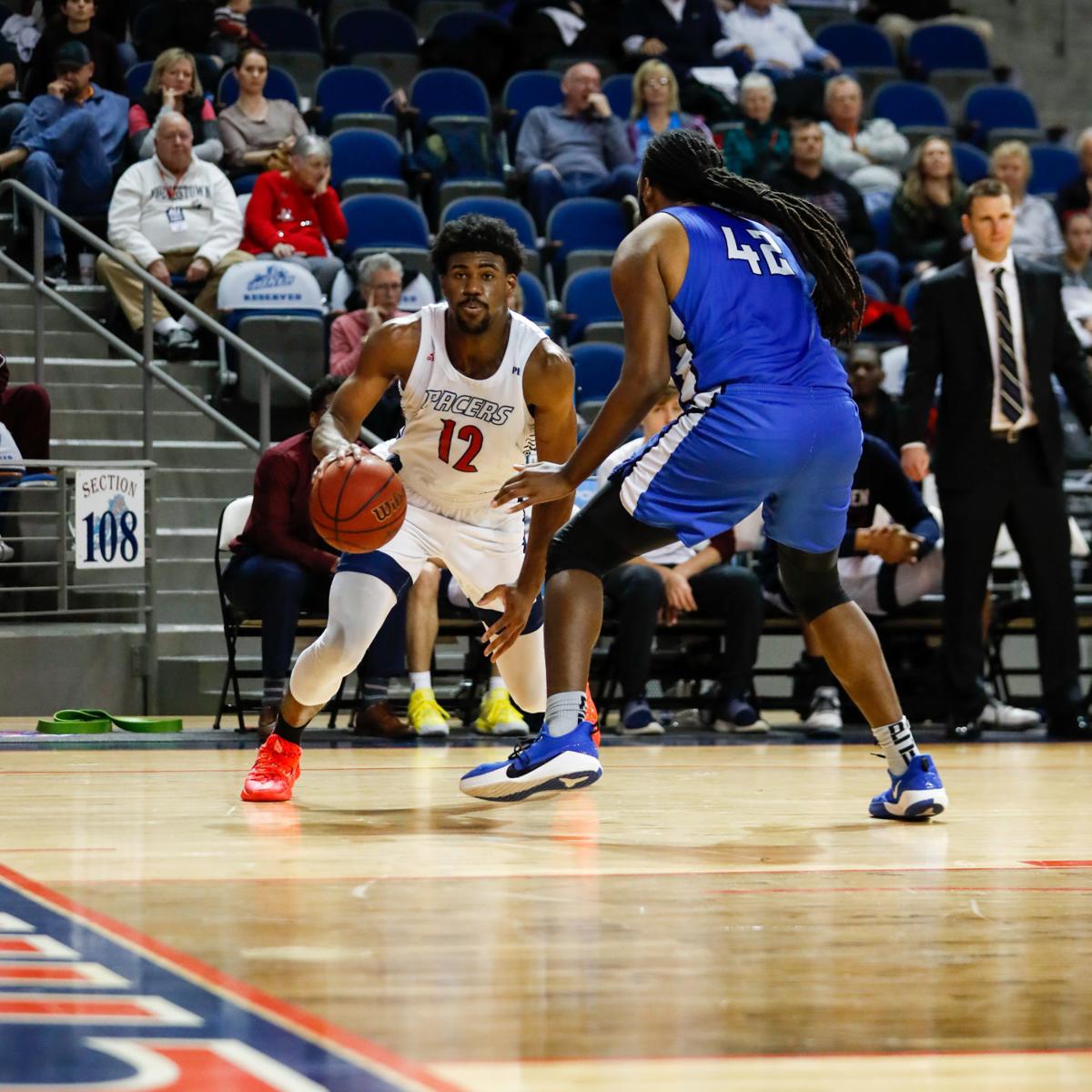 Shaquan Jules (with ball), a 6-foot-7 forward, is transferring from USC Aiken to Radford. 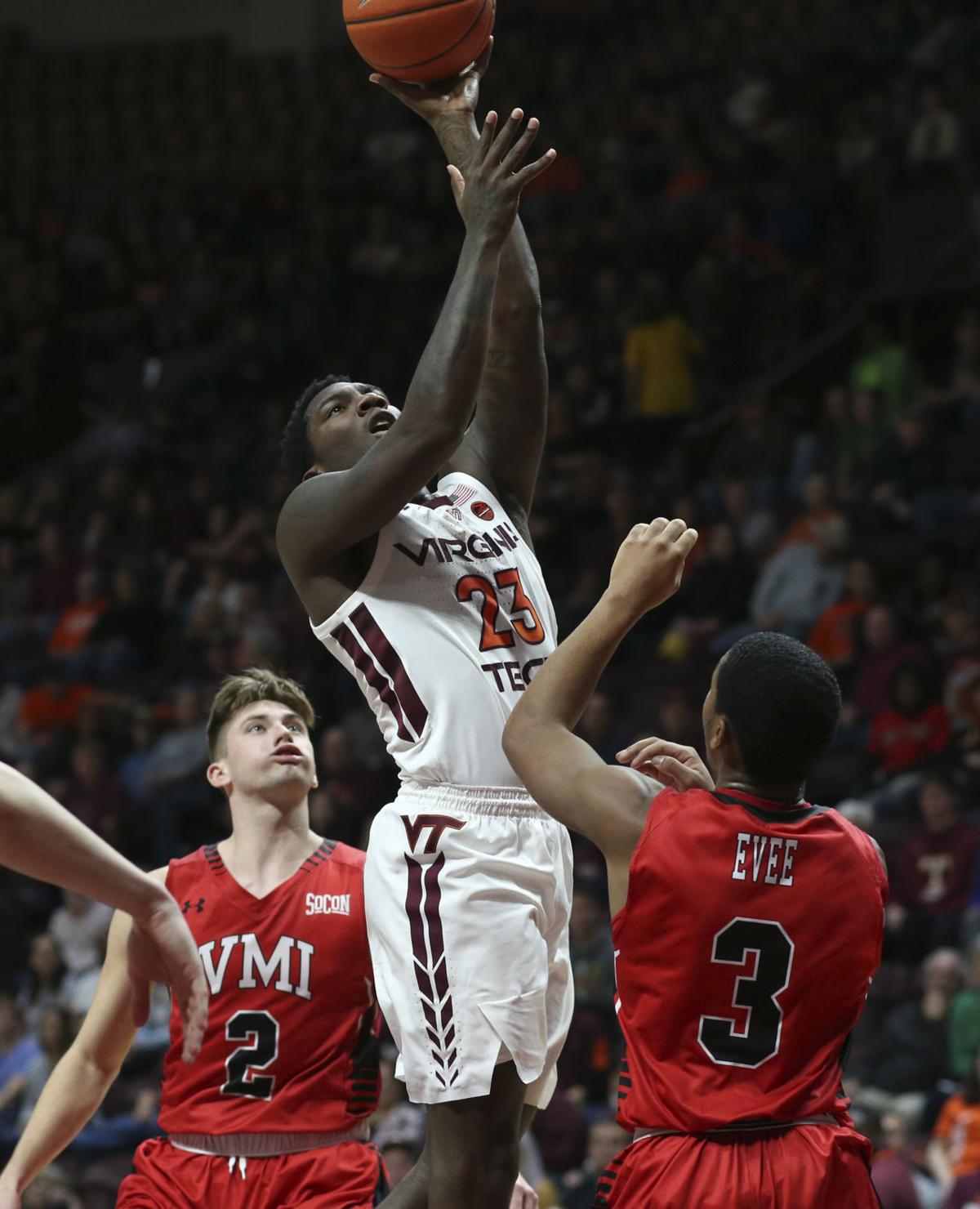 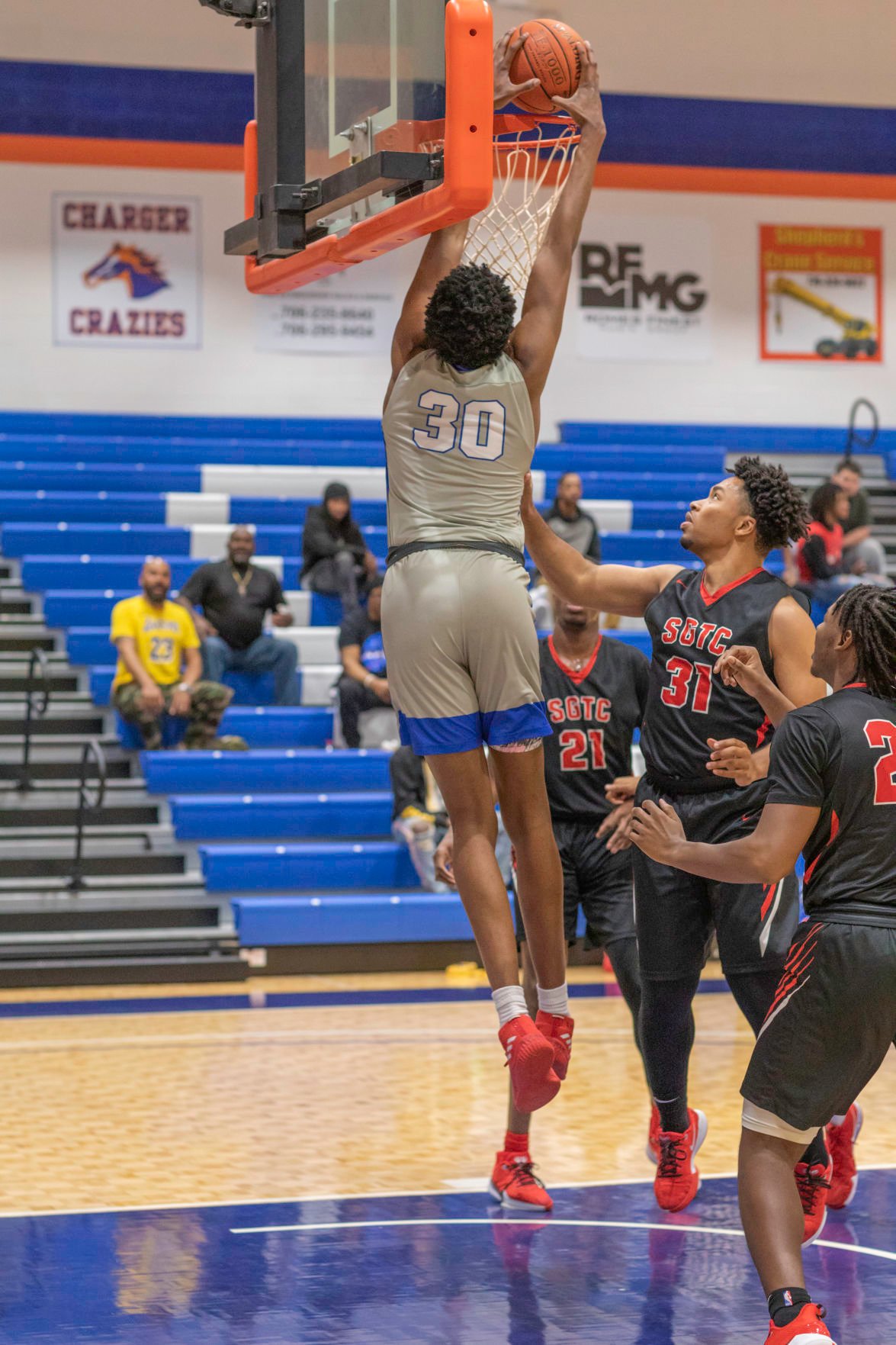 The Radford men’s basketball team has picked up two more transfers, including a 6-foot-11 center with the nickname of “Stretch.”

“I expect to be a factor this coming season,” Burke said in a phone interview.

“You’re going to see a lot of athleticism.”

Burke averaged 8.3 points, 8.3 rebounds and 17.2 minutes as a sophomore at Georgia Highlands last season. He blocked 44 shots in 32 games.

He is two inches taller than anyone Radford had on its roster last season.

“I score a lot of my points from offensive rebounding,” he said.

The Highlanders, who tied for the Big South regular-season title last season, were looking for reinforcements inside. Devonnte Holland was a senior last season, while Devine Eke was a graduate transfer. Leroy Butts entered the transfer portal.

Unlike Burke, Jules will have to sit out next season unless he gets a waiver from the NCAA.

He said he entered the transfer portal in late April because he did not like playing center at USC Aiken.

“I kind of was like the inside man,” he said. “I couldn’t take the ball up a lot. I couldn’t drive to the basket all the time. They wanted me to post up.

“I only was doing one thing I was good at.”

In addition to Radford, Jules said he was also contacted by Western Carolina, Robert Morris, Illinois State, Nichols State and Mount St. Mary’s. Radford was the first school to offer him a scholarship.

“I never thought that I would get several [Division I] people calling me and someone would actually offer me a full ride,” he said.

Jules averaged 12.8 points as a high school senior in Florida.

The Radford men’s basketball team will visit North Carolina State, Vanderbilt and East Carolina as part of its nonconference schedule in the 2020-21 season, according to coach Mike Jones.

The Highlanders will visit South Carolina and TCU in the on-campus portion of the Hall of Fame Classic.

Also as part of that event, Radford will host Elon and visit Norfolk State. Radford will not be among the four teams playing in Kansas City in the championship portion of that event; that foursome will be comprised of South Carolina, TCU, California and Northwestern.

VMI is back on Radford’s schedule after a two-year absence. The Keydets will host the Highlanders to kick off a home-and-home series.

Radford will take on James Madison for the fourth straight year. This time, the game will be at JMU.

Radford’s full nonconference schedule has not yet been announced.

The Virginia Tech men’s basketball team will host VMI as part of its nonconference schedule in the 2020-21 season.

VMI will be paid $95,000 for the Dec. 9 visit, according to the contract. It will be the third straight year the teams have met.

Another contract provided details about a game that Jon Rothstein of CBS Sports tweeted about earlier this spring. He had tweeted that Tech will face Davidson as part of a tripleheader in Charlotte.

The tripleheader, which is called the Basketball Hall of Fame Shootout, will be held on Nov. 13. As part of the deal, the Hokies will host Davidson the following season.

As previously reported, the Hokies will play Oklahoma State in Oklahoma City to start a home-and-home series. That game will be Dec. 19.

Tech’s full nonconference schedule has not yet been announced. Rothstein has tweeted that Tech will host George Washington and Marshall.

BLACKSBURG — Virginia Tech imposed a hiring freeze in the wake of the COVID-19 pandemic back in April, but university officials left some wigg…

As college athletic programs at all levels were contemplating their fall sports options, Washington and Lee took swift action Friday.

Bryant Stith believed he was taking all the necessary precautions to avoid contracting COVID-19.

Virginia Tech celebrated July Fourth with some fireworks on the recruiting trail.

There will be no fall Olympic sports regular-season games or exhibitions until at least Sept 1.

Shaquan Jules (with ball), a 6-foot-7 forward, is transferring from USC Aiken to Radford.