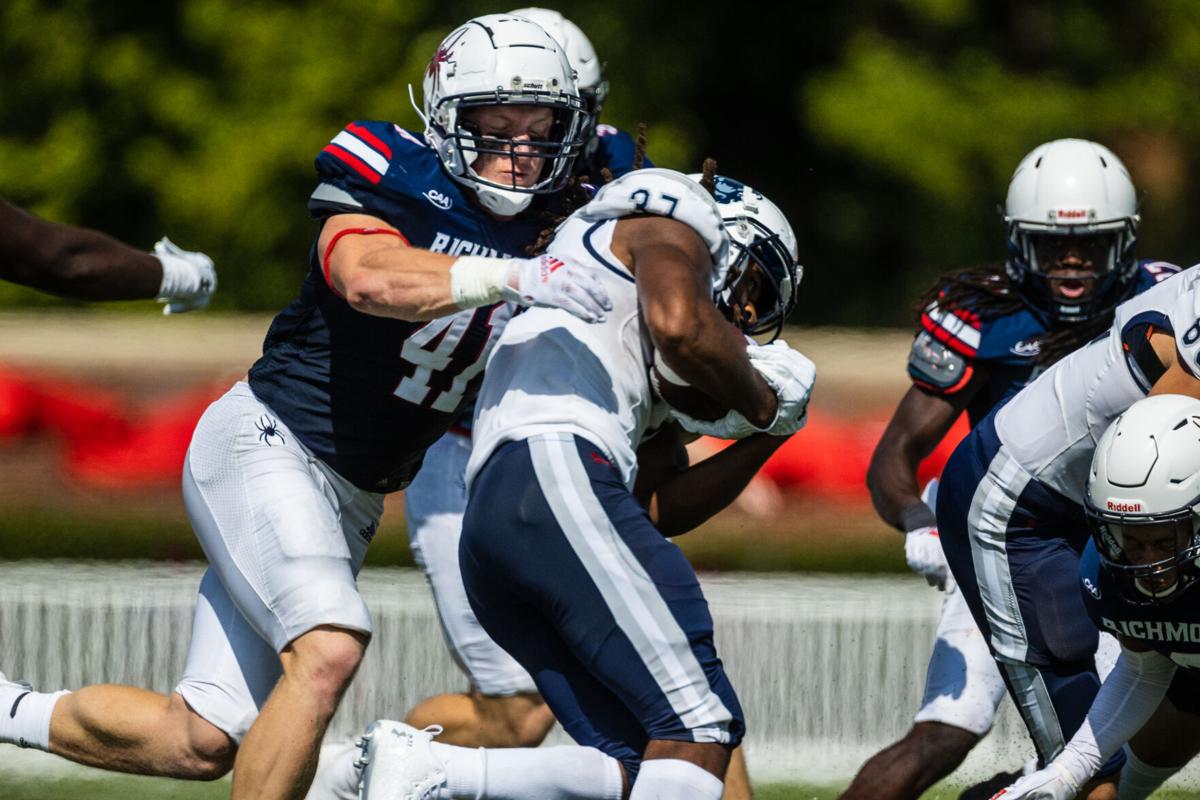 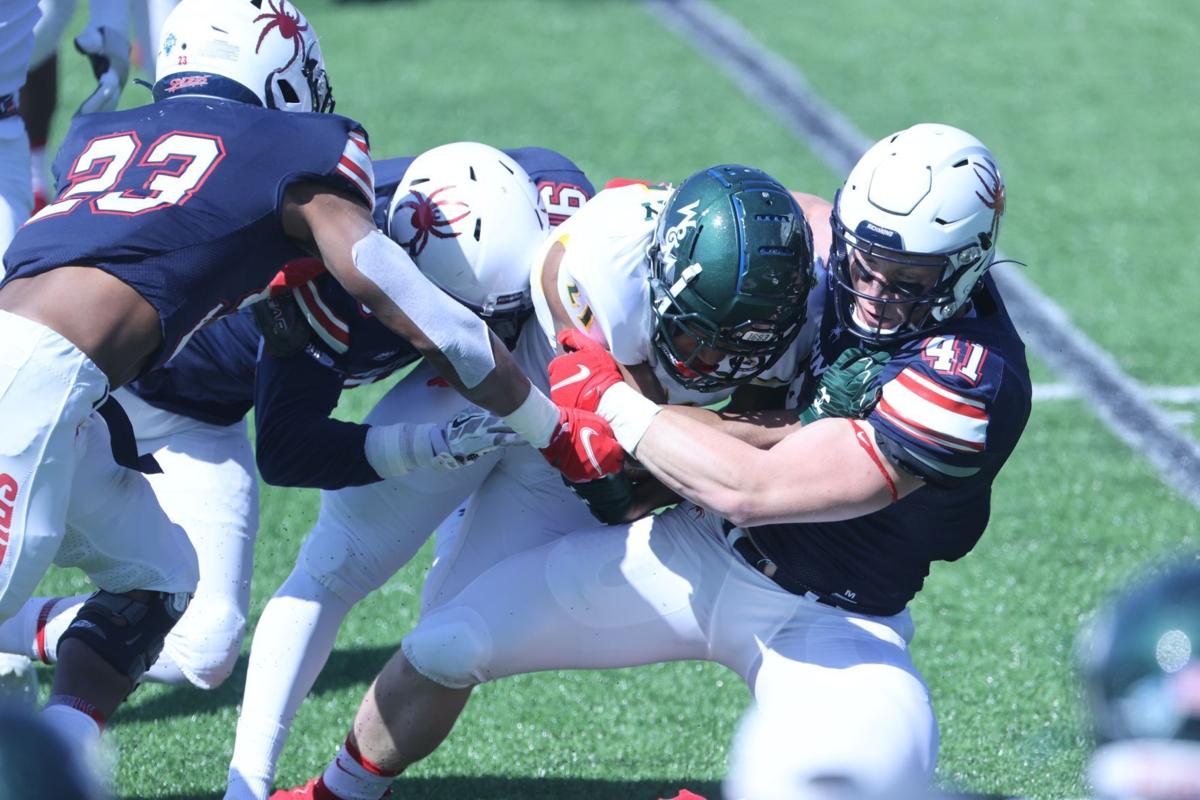 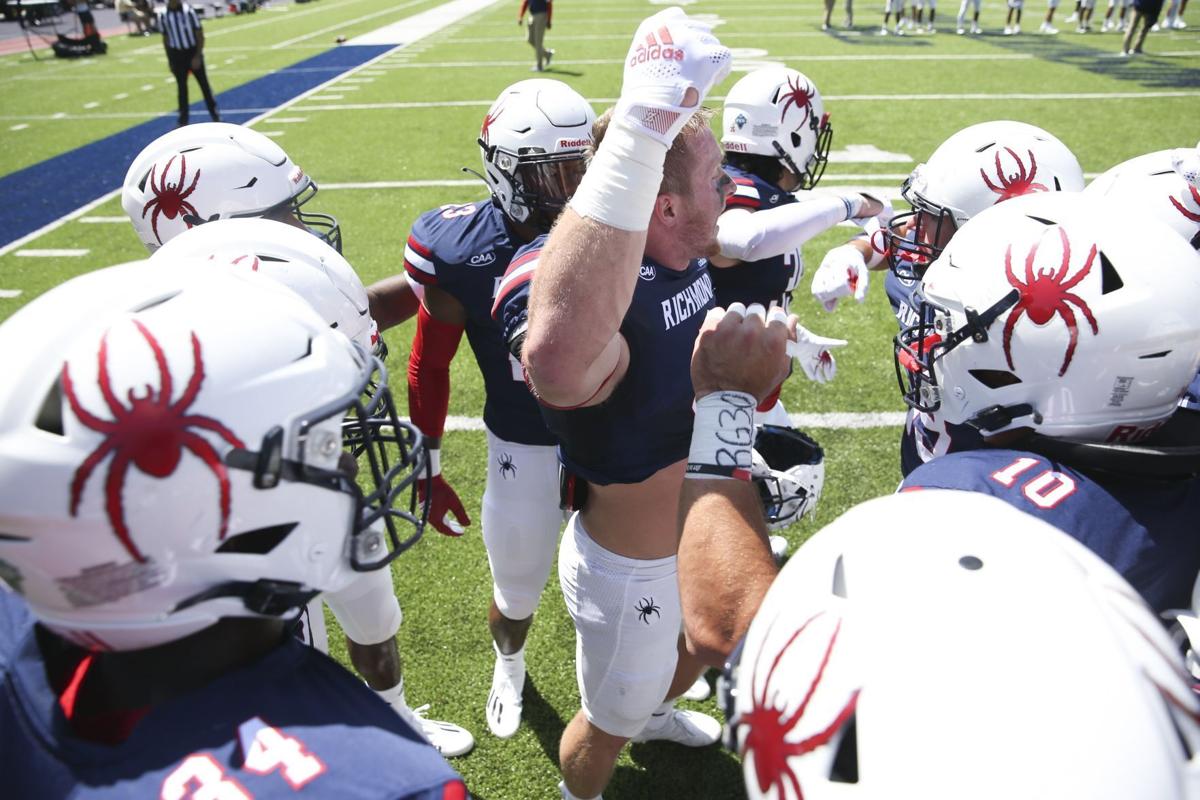 Richmond linebacker and Covington graduate Tyler Dressler gathers his teammates before the Spiders’ season opener against Howard. Dressler is one of the team captains. 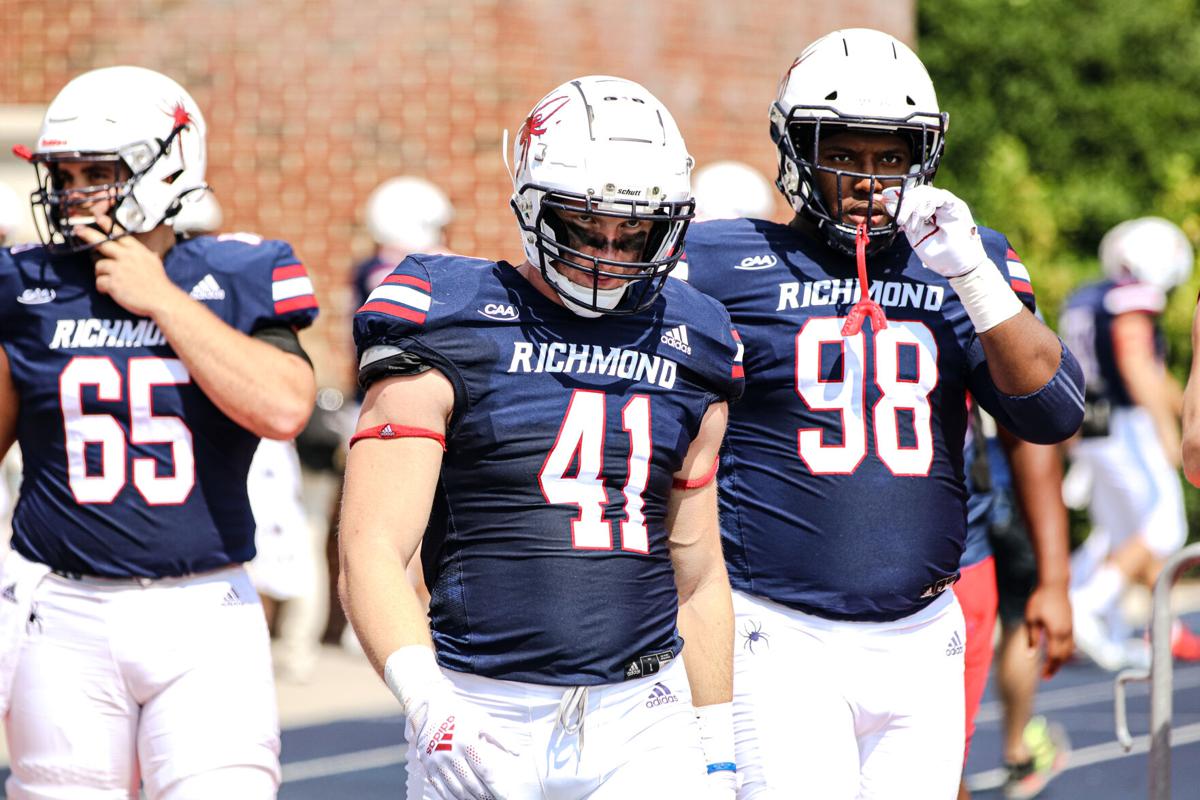 Covington High School graduate and Richmond middle linebacker Tyler Dressler (center) returned to Richmond as a graduate student to use his extra year of eligibility. 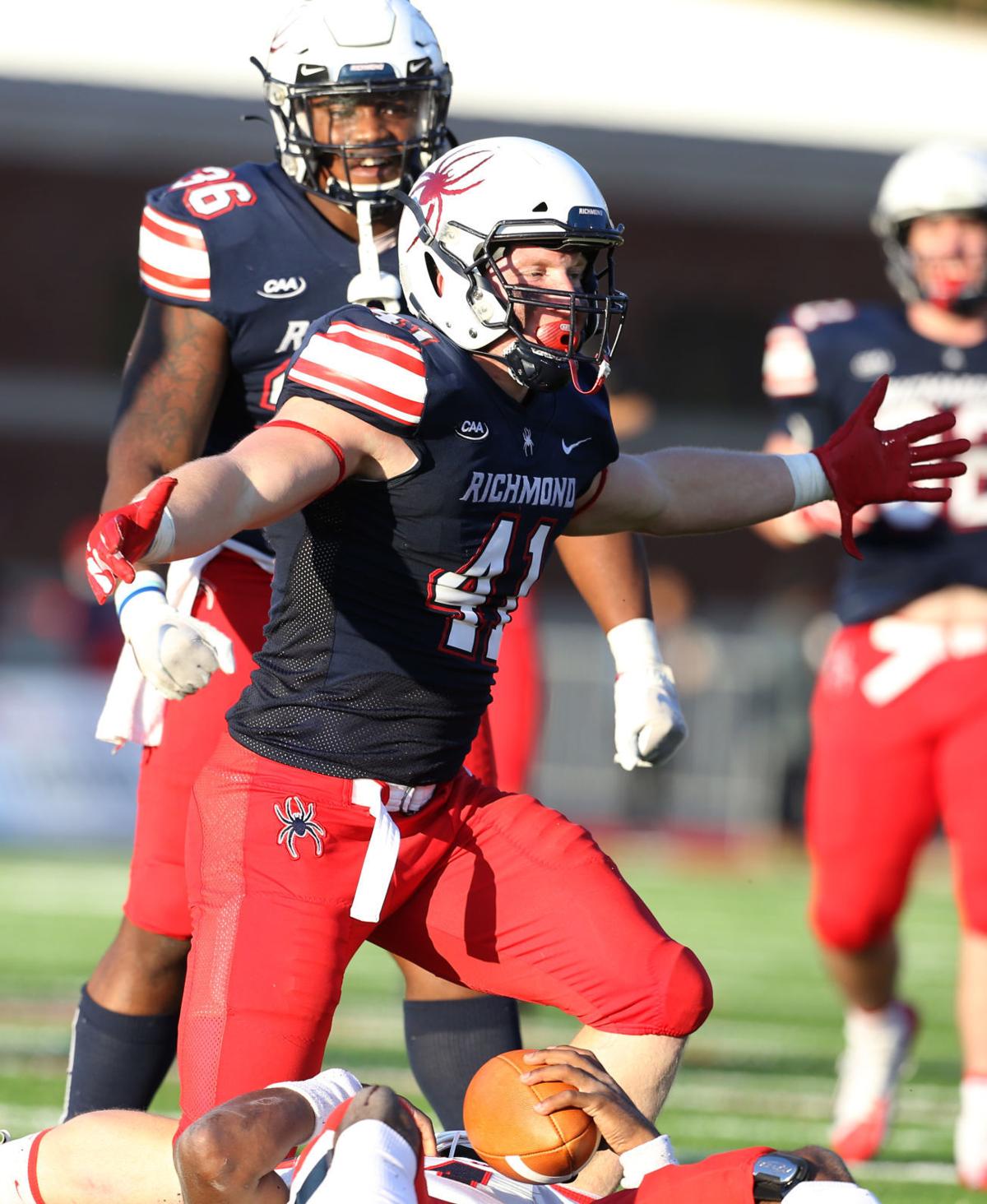 Richmond linebacker Tyler Dressler celebrates a sack in a 2019 game. The Covington graduate had 104 tackles and four sacks that season. 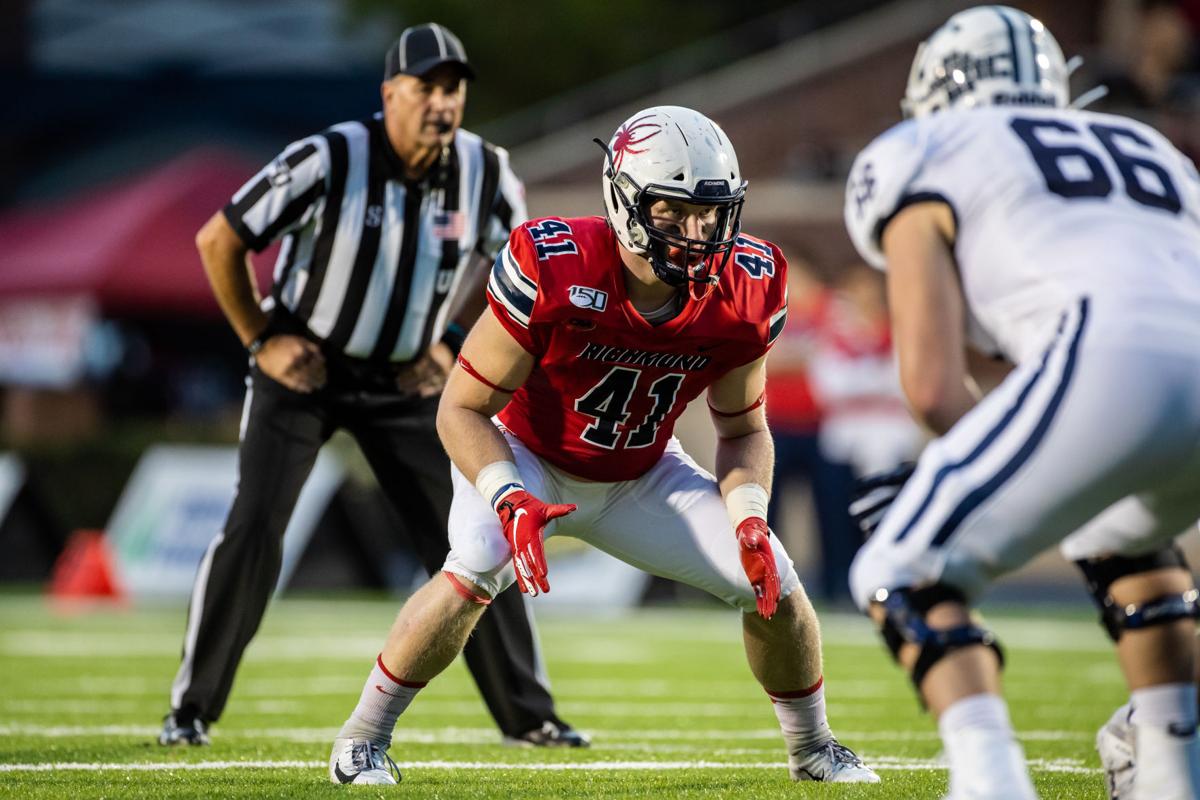 Covington graduate Tyler Dressler (top) is in his third season as a starting linebacker for Richmond, which will visit Virginia Tech on Saturday.

While growing up in Covington, Tyler Dressler used to go to Virginia Tech football games with his family and cheer on the Hokies from the Lane Stadium stands.

The Covington High School graduate will be back at Lane Stadium on Saturday, but this time he will be on the field.

Dressler is the starting middle linebacker for FCS member Richmond, which will visit FBS member Virginia Tech on Saturday.

"It's huge for myself and my family and the community of Covington," Dressler said of the game in a phone interview this week. "Growing up, it was always a dream of mine to play in Lane Stadium. Didn't really think I'd be jumping at the other end of the tunnel, but that's just how it works out sometimes.

"The whole community of Covington might be at the game. … It doesn't happen very frequently that a small-town kid plays in Lane Stadium."

Covington is a Class 1 (formerly known as Group 1A) school — the classification for the smallest schools in the Virginia High School League. So Dressler felt he had something to prove when he joined the Spiders in 2017.

"There's a chip on my shoulder," the graduate student said. "When people look at you, [ask] where you're from, nobody's ever heard of it.

"If I didn't have that chip on my shoulder, I'd be complacent."

"He's worked really, really hard," said Richmond coach Russ Huesman, whose team is ranked No. 24 in the FCS Top 25 media poll. "He wasn't a highly recruited guy coming out of high school — played, I think, at a really, really small program. … We took him late — and thrilled we did. He's been an extremely productive player for us."

Flipping from VMI to Richmond

"As long as I can remember, the entire Dressler family would attend the Virginia Tech football games," Dressler said.

Dressler's father, Steve, was Covington High School's football coach for five seasons before resigning in the summer of 2012. He still teaches at the high school.

Steve Dressler, a former Tech walk-on, will be one of 15 family members in the Lane stands Saturday. But he won't be rooting for Tech this time.

Tyler Dressler played football, basketball and baseball at Covington. He made the Timesland Sizzlin' Sophomore team in football. He made the All-Timesland first team in baseball as a senior.

Dressler played both quarterback and linebacker for the Cougars. But a Hokies career was not in his future.

"I don't think Virginia Tech was really interested in anybody from Covington," he said. "I think our football team had 20 players at one point. … I just don't think the level of competition was necessarily there. I was very, very fortunate to get an offer from the University of Richmond."

"We were turning over every single rock," Wood said. "That's where you can get some really special players, is some of those places that are not recruited as heavily.

Dressler verbally committed to VMI in December 2016. He also had offers from some Division II schools, including Concord, where his older brother Derek was on the team. But VMI was his only FCS offer at the time.

Later in December, however, Wood left VMI to join the staff of the newly hired Huesman at Richmond.

Wood lobbied Huesman to offer Dressler a scholarship. Richmond made the offer in late January 2017.

Dressler signed with Richmond, which was coming off its third straight FCS playoff appearance, in February 2017.

"There are a lot of diamonds in the rough [at small high schools]," Dressler said.

The transition from Covington to FCS football was not easy.

"The jump from a very small high school to elite football, it was huge," Dressler said. "Physically and mentally, coming in [I] was not prepared.

"I don't think I had the knowledge or the physicality to be prepared to play [for Richmond]. … In small towns, it's a struggle sometimes because they don't have all the resources that some of these bigger towns … have."

Dressler credits Wood for turning him into a college football player.

"He pretty much built me brick by brick," Dressler said.

"He worked hard in the weight room, film room," said Wood, who is Richmond's defensive coordinator and linebackers coach.

Dressler played for Richmond as a true freshman, mostly on special teams. His starting linebacker debut did not come until the final game of his sophomore season.

"He's a big kid. He's physical. He runs pretty decent for his size," Huesman said. "He's really smart. Probably not the most athletic linebacker we have, but tough, hard-nosed."

Dressler credits his knack for tackles to his "relentless effort to the ball."

"You have to be hungry each and every single play," he said.

Richmond did not play football last fall because of the coronavirus pandemic. The Spiders went 3-1 in their postponed, abbreviated season last spring. Dressler had 29 tackles, one sack and one interception.

Not getting to play a full season as a senior was "pretty devastating" to Dressler.

Dressler graduated in May with a degree in health care studies. But the NCAA Division I Council had granted all 2020 fall-sports athletes an extra year of eligibility. So Dressler returned to Richmond for a fifth season, and is pursuing a master's degree in human resource management.

"My primary goal is to leave here with a championship ring," he said. "And … the opportunity to get a master's degree paid for, that opportunity doesn't come very frequently."

He has 25 tackles, one sack and one interception for the 2-1 Spiders this season.

"He swallows ball-carriers up," Wood said. "He is deceptively fast.

"He's really improved in his open-field tackling. That'll be on display Saturday because [Tech quarterback Braxton] Burmeister is a scrambler.

"There's a lot of pressure on that position. I think that pressure challenges me every day to be a better football player," he said.

For the second straight season, Dressler is one of the team's captains.

"He's a fantastic person," Huesman said. "The players love him. The coaches love him."

This season: 25 tackles in three games; one sack; one interception

JMU, Liberty, ODU could be moving to new conferences

The conference realignment wave that began this summer among Power Five conferences has crashed into Group of Five leagues, with James Madison, Liberty and Old Dominion potentially affected.

Richmond linebacker and Covington graduate Tyler Dressler gathers his teammates before the Spiders’ season opener against Howard. Dressler is one of the team captains.

Covington High School graduate and Richmond middle linebacker Tyler Dressler (center) returned to Richmond as a graduate student to use his extra year of eligibility.

Richmond linebacker Tyler Dressler celebrates a sack in a 2019 game. The Covington graduate had 104 tackles and four sacks that season.

Covington graduate Tyler Dressler (top) is in his third season as a starting linebacker for Richmond, which will visit Virginia Tech on Saturday. 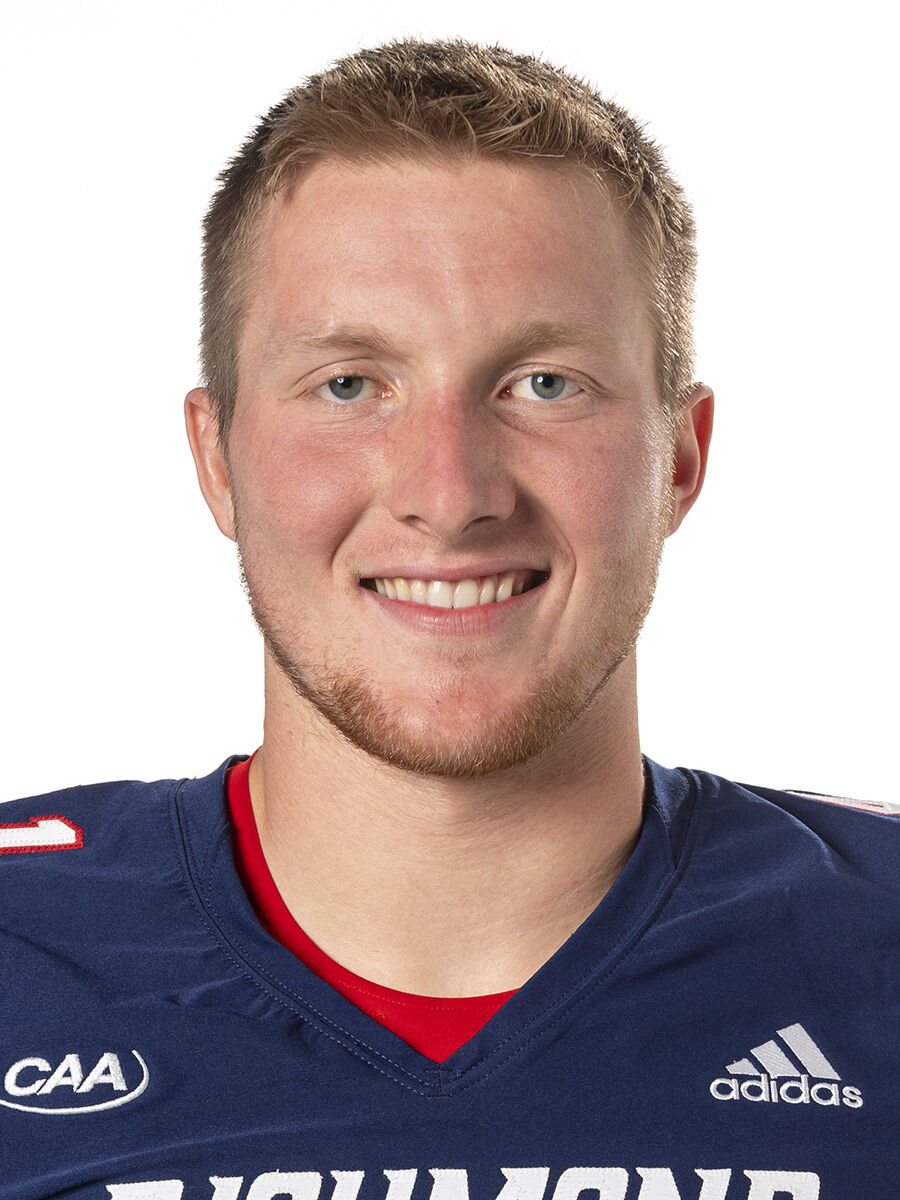