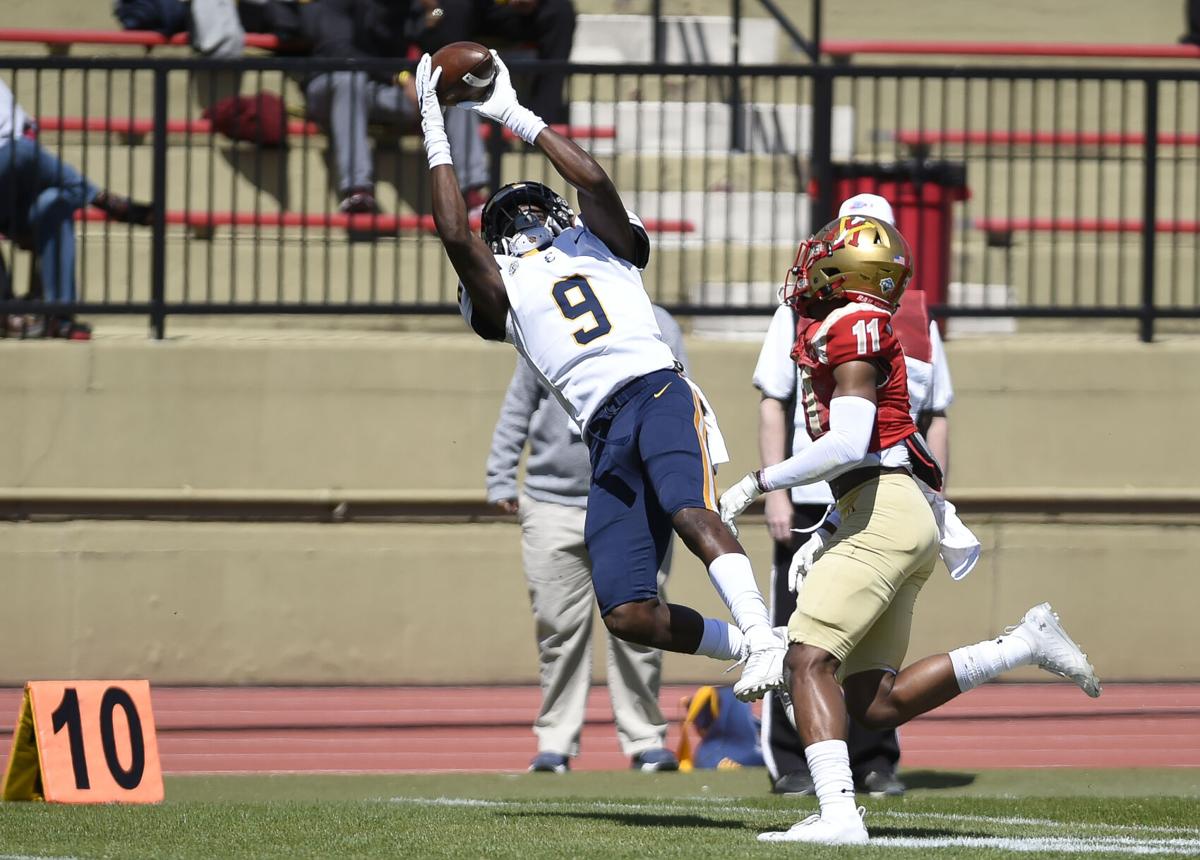 ETSU receiver Will Huzzie makes a 9-yard touchdown catch as VMI’s Alex Oliver looks on in the third quarter on Saturday. 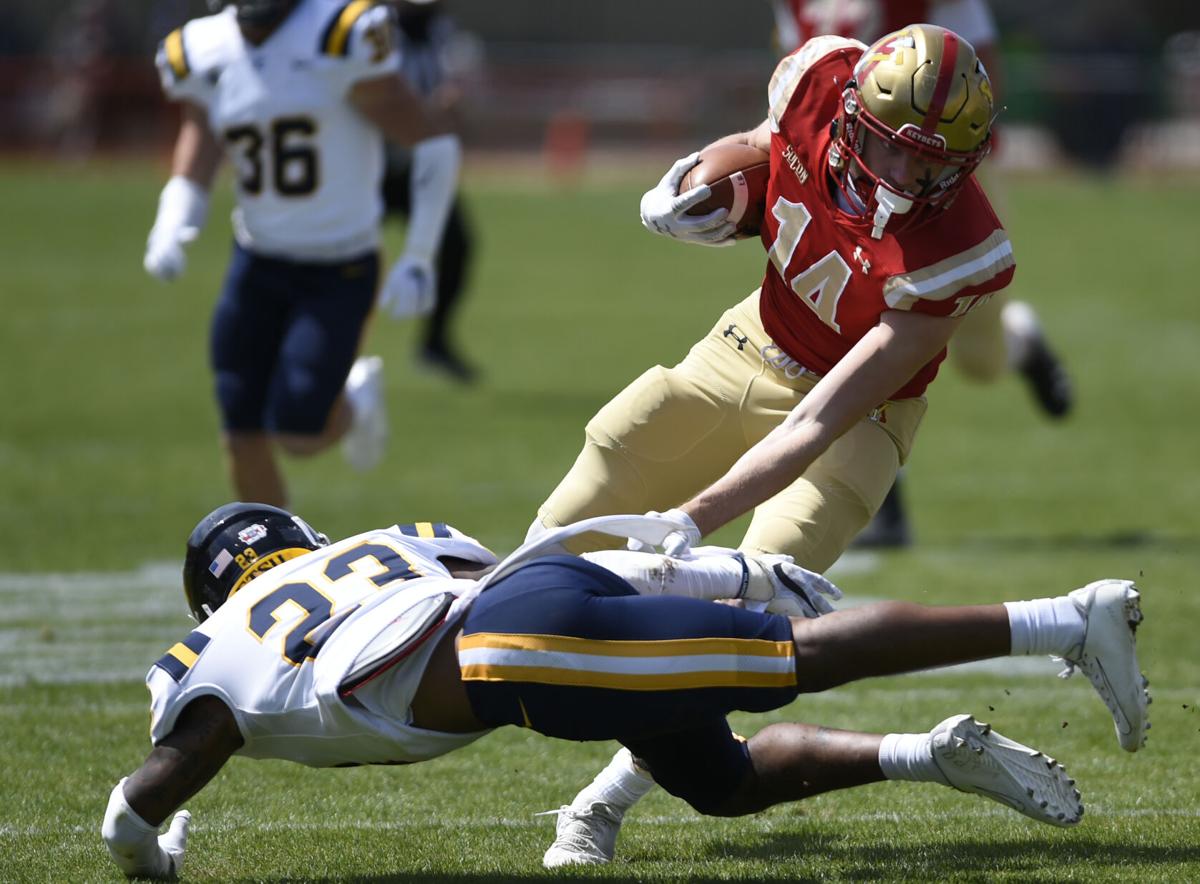 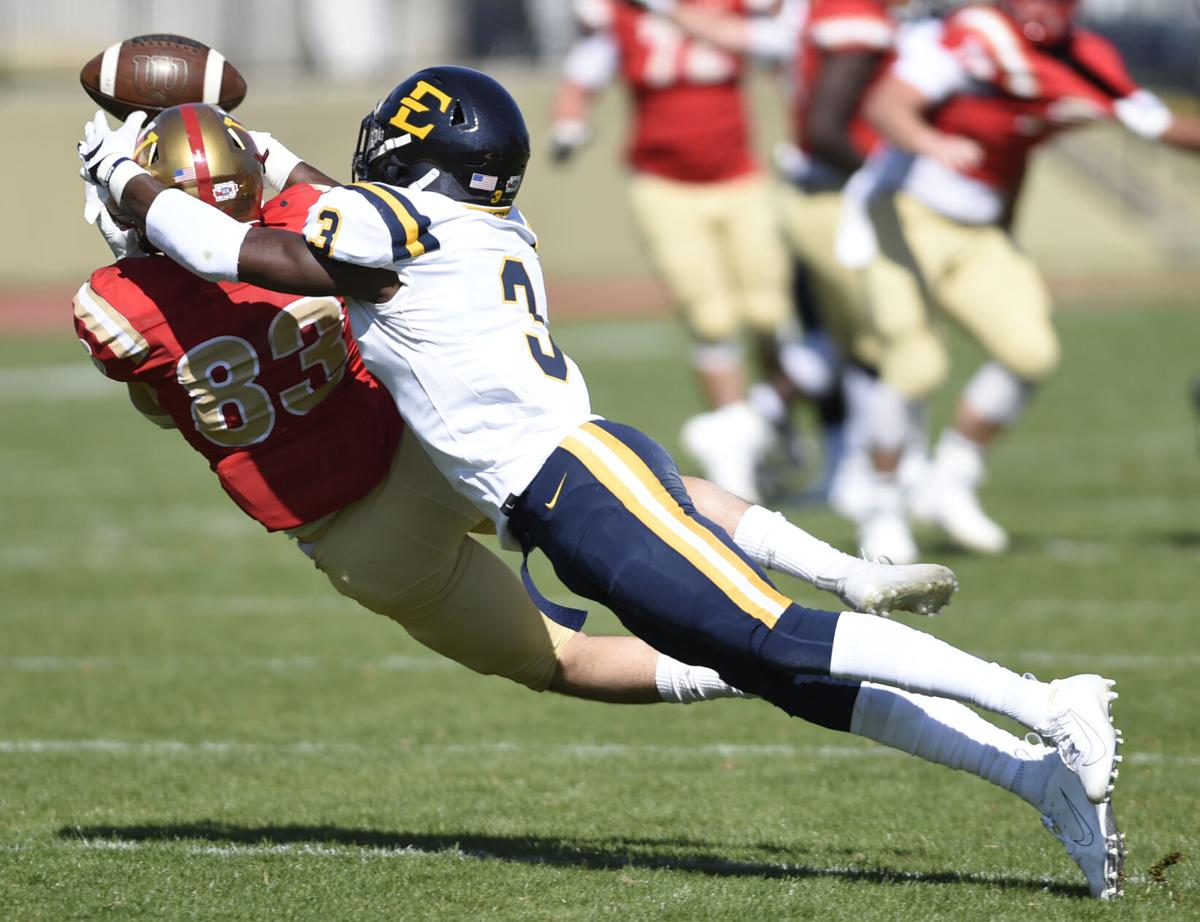 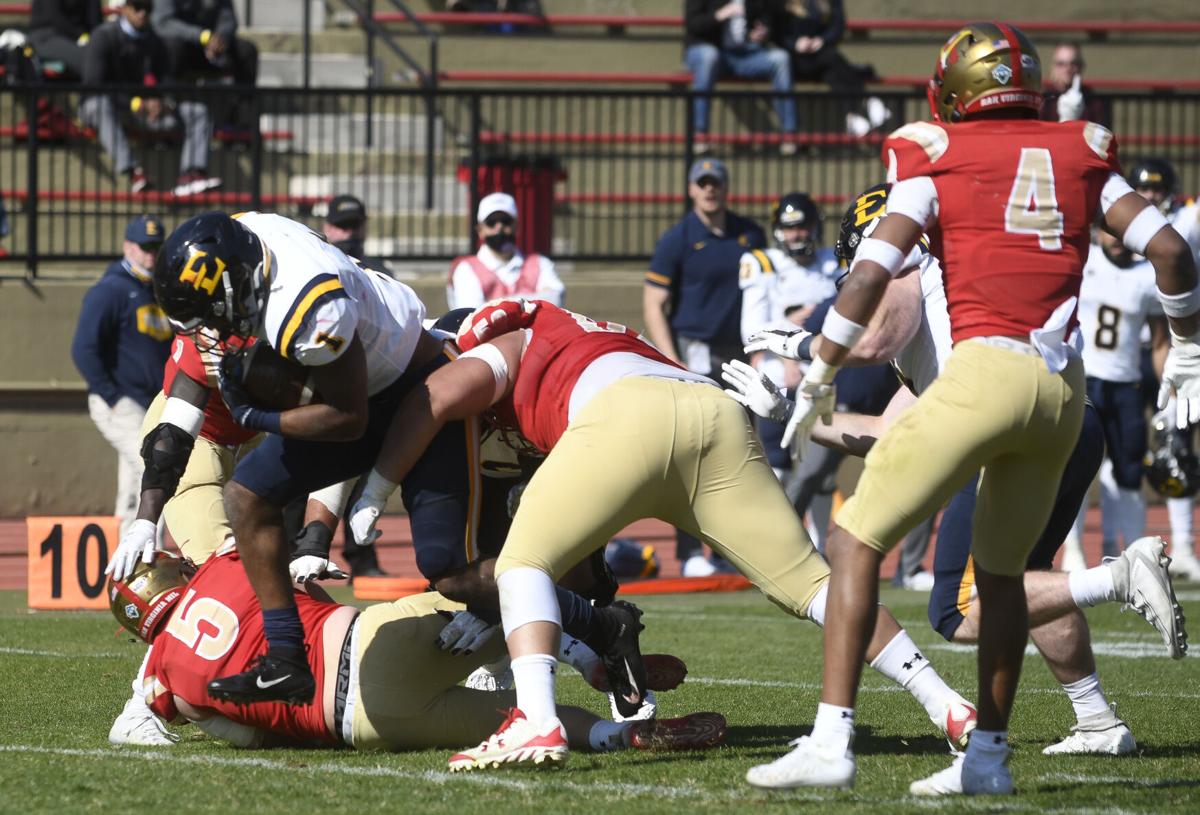 ETSU running back Quay Holmes scores on a 1-yard run during the first quarter of Saturday's 24-20 win over VMI. Holmes ran for 135 yards and two touchdowns. 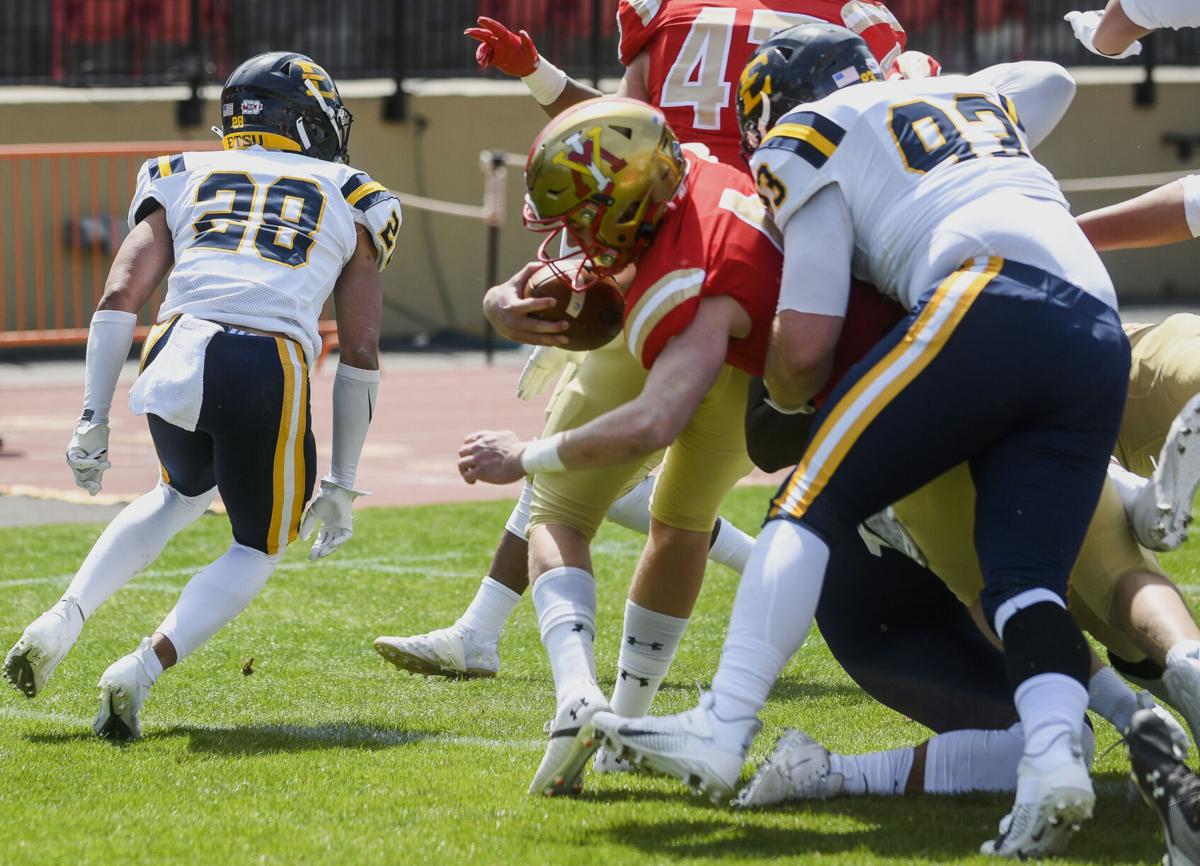 VMI quarterback Seth Morgan (center) crosses the goal line on a 2-yard TD run with ETSU's Max Evans (right) on his back in the first quarter. 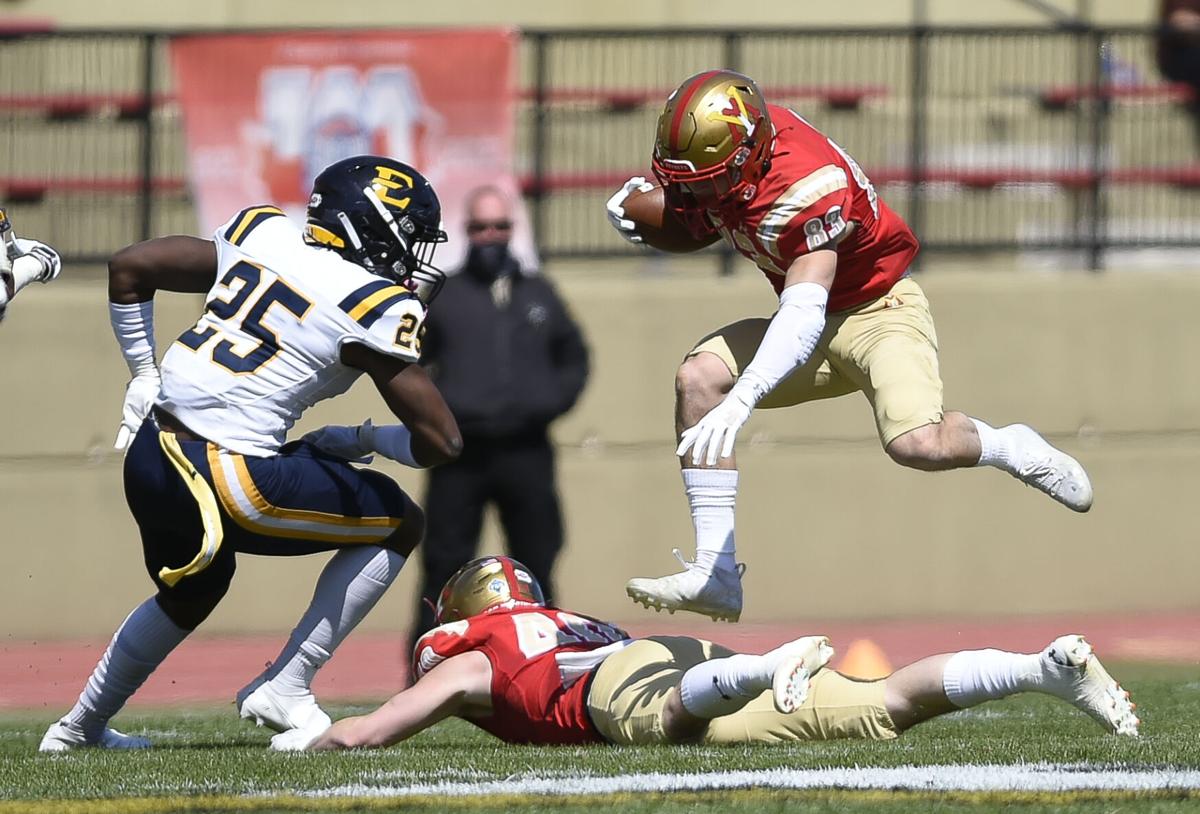 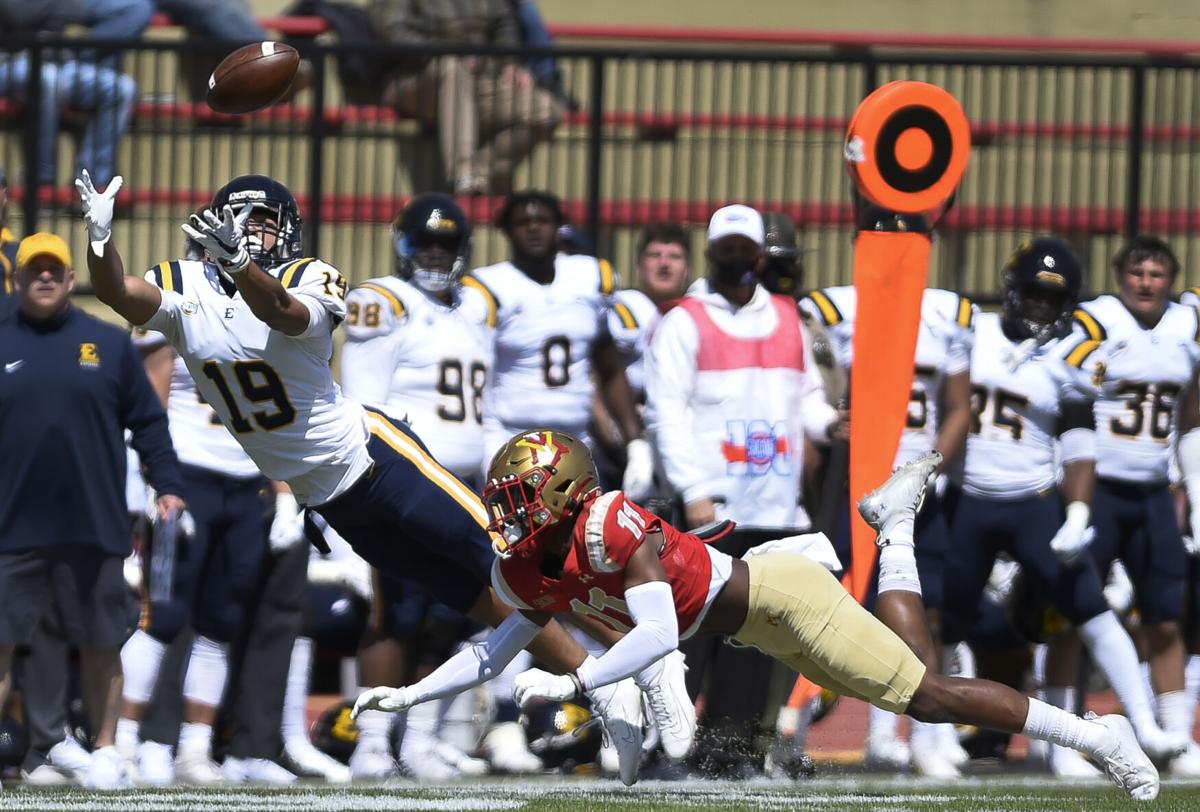 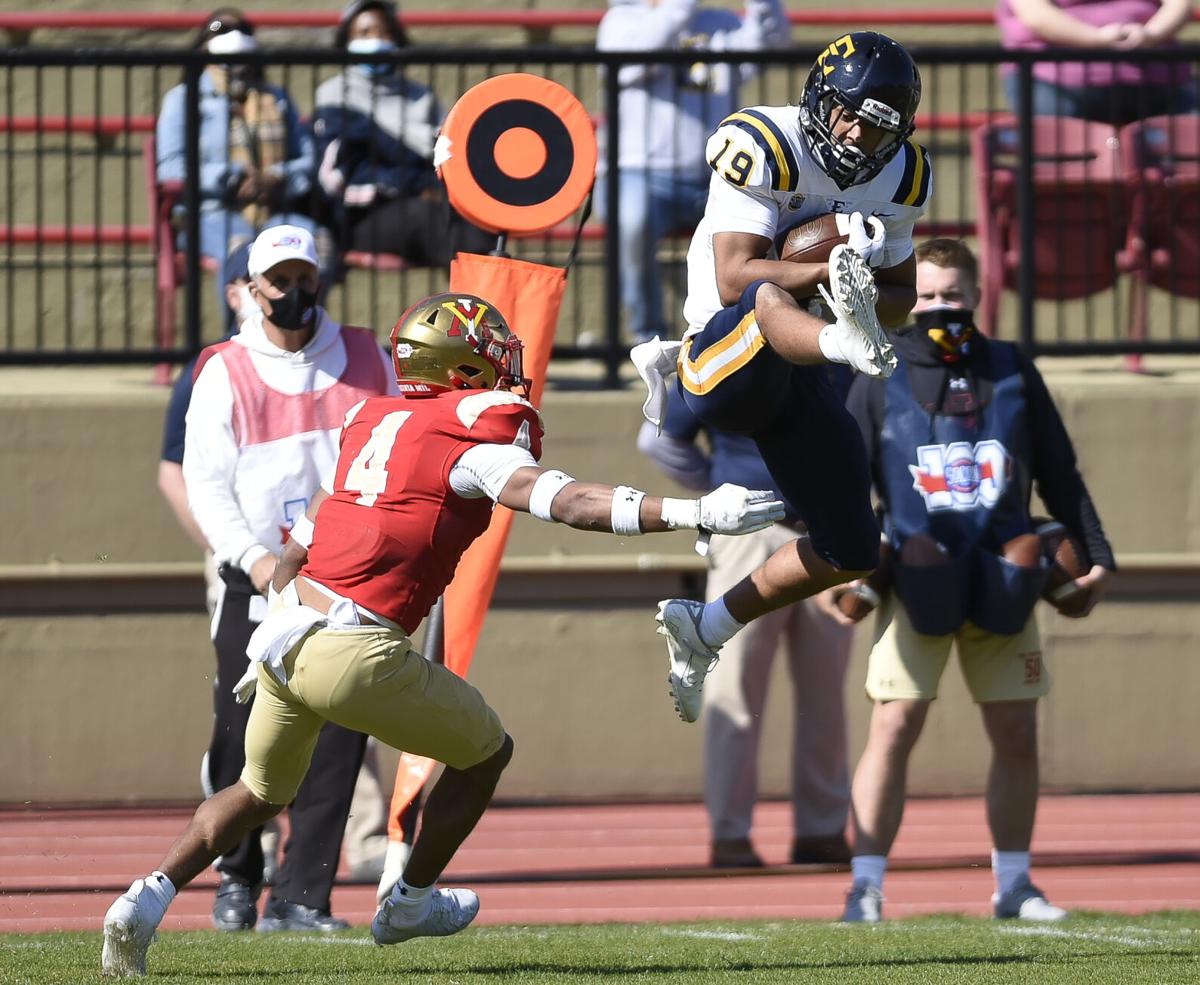 LEXINGTON — The VMI football team struck out Saturday in its first attempt to claim the first FCS playoff bid in its history.

But VMI still controls its own destiny.

VMI reached ETSU territory on its final three series but came away empty-handed. The drives were ruined by sacks, a bad snap and a fumble.

“We’ve kind of had a history this whole season — we shoot ourselves in the foot,” VMI redshirt freshman quarterback Seth Morgan said.

“We’re a talented football team. … If we eliminate our own errors, then we can win any amount of games that we want to win. But you see on the field, when I miss throws, guys miss blocks, it’s tough.”

VMI (5-1, 5-1) would have claimed the Southern Conference title and the SoCon’s automatic FCS playoff bid with a win Saturday.

But VMI, which is idle next weekend, would still capture the bid with a home win over The Citadel (1-9, 1-5) in its April 17 regular-season finale.

“We’re still in a good position to win the SoCon and make the playoffs,” Morgan said. “We’ve just got to be able to finish games.”

The Keydets might even be able to claim the bid while taking next weekend off. If ETSU loses at Mercer (4-5, 4-2) in its April 10 SoCon finale, VMI will secure the bid.

A win Saturday would have given VMI its first Southern Conference title since 1977.

But the 20 points were the fewest VMI had scored since a 14-13 win over Furman in the season opener.

Morgan made his second straight start in place of senior standout Reece Udinski, who suffered a torn ACL two weekends ago at Samford. Udinski’s VMI career is over.

Morgan threw four touchdown passes to lead the Keydets to a victory at Wofford in his starting debut last weekend, enabling VMI to clinch its first winning season since 1981.

But Morgan did not throw a TD pass Saturday. He completed 36 of 46 passes for 315 yards with one interception. He also ran for a team-high 42 yards and one TD.

“They bring pressure,” he said. “They show a lot of disguises. Their safeties, they kind of mess with you a little bit. So I had to be really good with my eyes today and sometimes they tricked me.

“I missed some … pivotal throws that I wish I could have back.”

VMI receiver Jakob Herres said ETSU “threw some stuff at us that we didn’t expect.”

The Keydets played without starting running back Korey Bridy and starting receiver Leroy Thomas (Patrick Henry) for the second straight game because of leg injuries.

“The run game, we just couldn’t get it established,” Herres said. “When they know we’re throwing the ball, it makes it that much harder.”

Grant Swinehart scored on a 3-yard run to give VMI a 20-17 lead late in the third quarter.

VMI drove to the ETSU 28 on its next series, but the Buccaneers recorded back-to-back sacks on third and fourth down.

The Keydets drove to the ETSU 44 on their next possession. But center Brad Davis snapped the ball over Morgan’s head, putting the Keydets all the way back at the VMI 36. Two plays later, VMI punted.

“We snapped the ball over the quarterback’s head, which was a self-inflicted wound,” Wachenheim said.

VMI cornerback A.J. Smith picked off a Brock Landis pass at the VMI 33 to give the Keydets the ball back with 3:50 to go.

The Keydets drove to the ETSU 32. But Rashad Raymond lost 3 yards on a run, so VMI faced a fourth-and-5 at the ETSU 35.

Morgan threw a fourth-down pass that Herres caught at the ETSU 30. But the ball popped out when Herres was hit by ETSU’s Tyree Robinson. ETSU’s Karon Delince recovered the fumble.

“[Robinson] made a nice play — got his hand in there and the ball came out,” Herres said. “That’s a play I’ve got to make.”

Holmes ran for 135 yards and two touchdowns for the Buccaneers.

The Citadel at VMI

ETSU receiver Will Huzzie makes a 9-yard touchdown catch as VMI’s Alex Oliver looks on in the third quarter on Saturday.

ETSU running back Quay Holmes scores on a 1-yard run during the first quarter of Saturday's 24-20 win over VMI. Holmes ran for 135 yards and two touchdowns.

VMI quarterback Seth Morgan (center) crosses the goal line on a 2-yard TD run with ETSU's Max Evans (right) on his back in the first quarter.