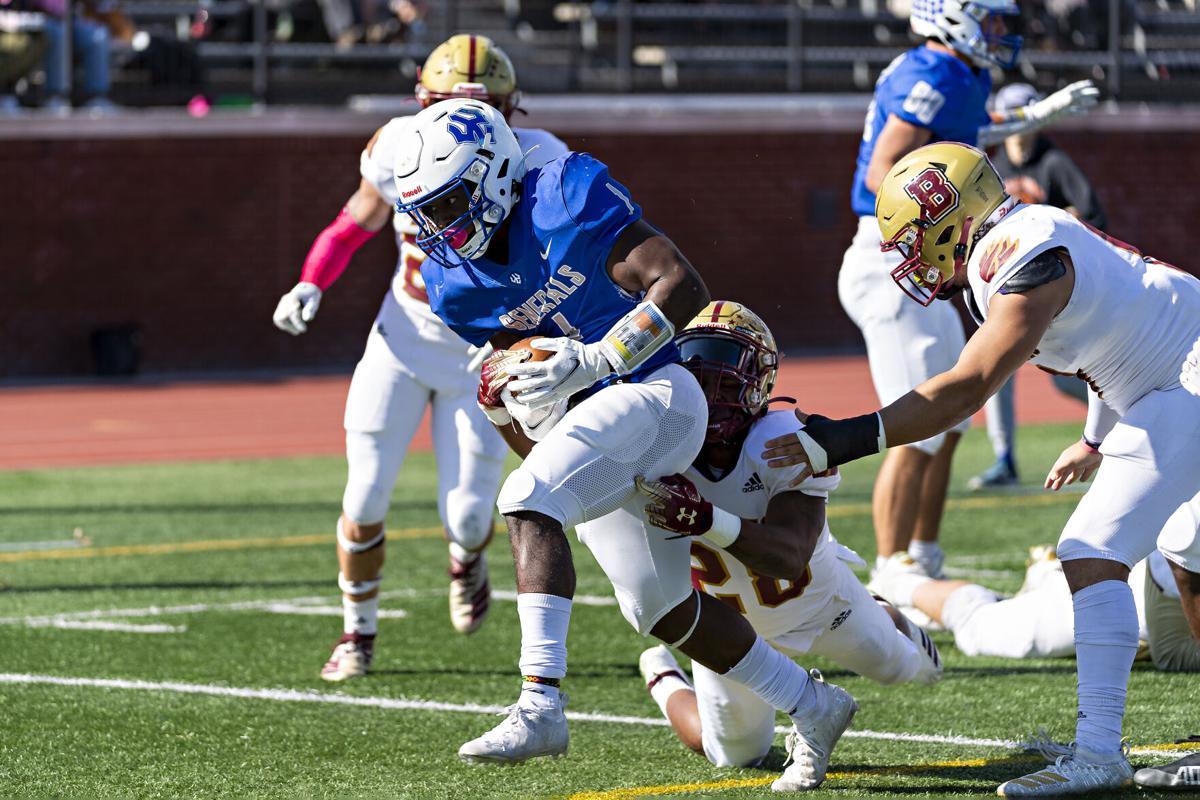 Josh Breece ran for 117 yards and two touchdowns on 25 carries in Saturday’s win over Bridgewater. 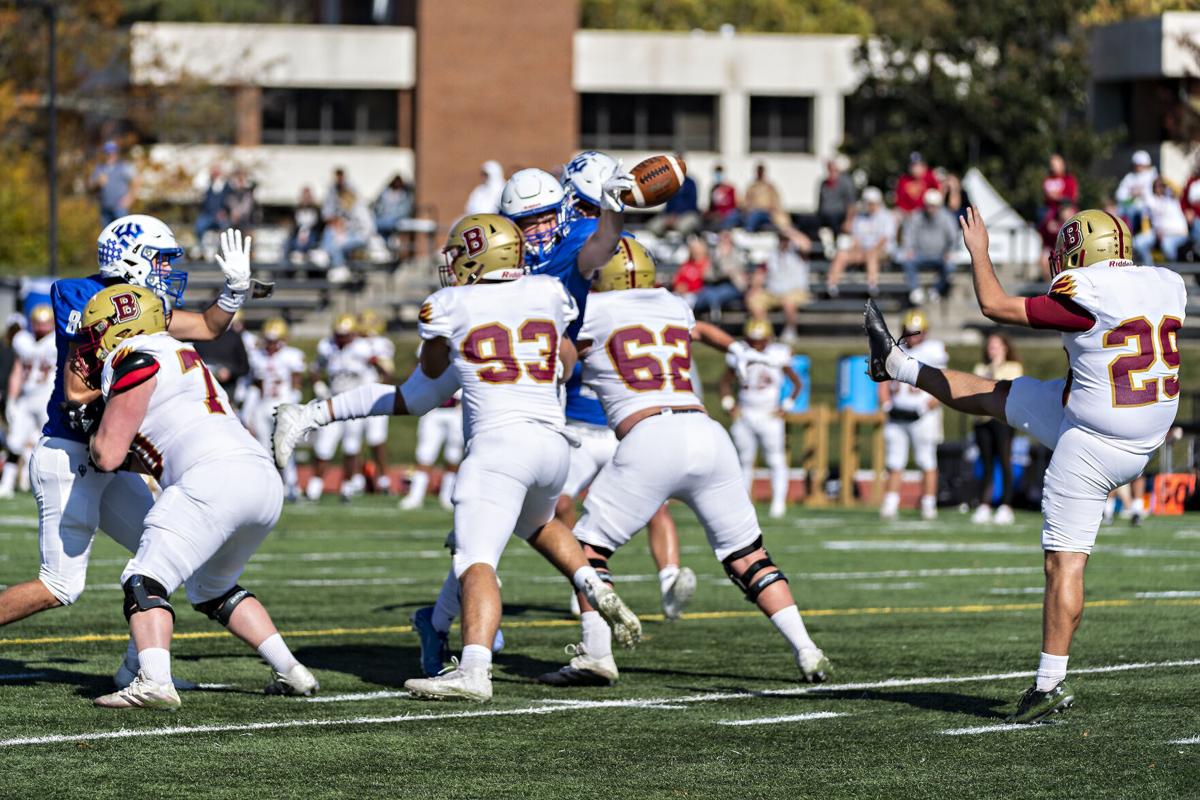 W&L's Adam Harter (center) gets his hands on the ball and blocks a punt by Bridgewater's Garrett Graves (right) in the second quarter of Saturday's win. 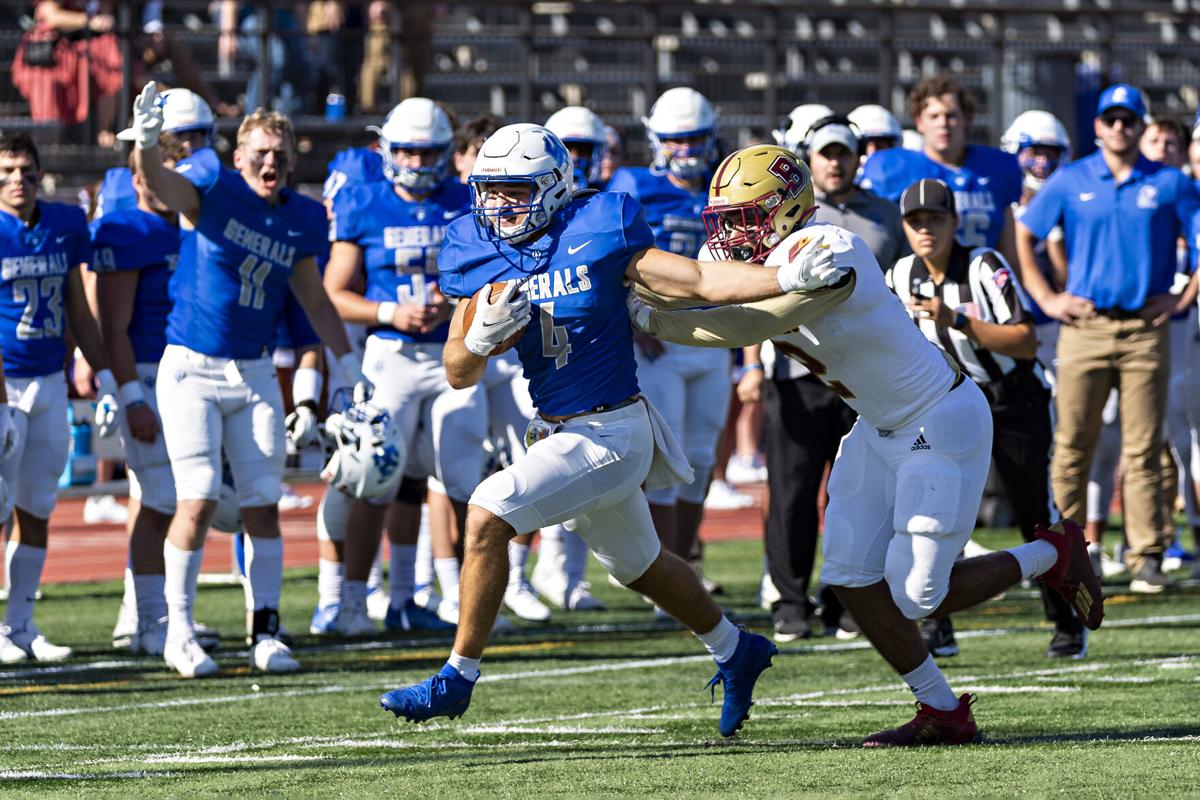 Coby Kirkland ran for 56 yards for Washington and Lee in Saturday’s win. The Generals ran for 298 yards.

LEXINGTON — The Washington and Lee football team is making up for lost time.

The Generals did not play last spring because of COVID-19 issues on their team. But they have been so good this fall that they are one win away from the NCAA Division III playoffs.

The Generals beat Bridgewater 17-0 at Wilson Field on Saturday to remain in sole possession of first place in the ODAC.

“The [team] identity is definitely passion. We lost our season last year,” Breece said. “Everybody else got a chance to play. That really put a big chip on our shoulder. So we come out every day and attack it. We had two years to wait and now we finally get payday.”

Breece, the school’s career rushing leader, is a fifth-year senior. He did not attend W&L in the fall 2020 semester and delayed graduation so he could be a part of this season. Now he has a shot to end his career in the NCAAs.

“It’d be super special,” he said of an NCAA bid. “Nothing’s better than competing with the absolute best. And I have a feeling that we are the best.”

Breece had the 19th 100-yard rushing day of his career Saturday, breaking the W&L record.

W&L is seeking its first ODAC title since 2017, when Breece was the team’s freshman star.

The Generals, who visit nonleague foe Emory & Henry next weekend, have two more ODAC games left. They can clinch the ODAC’s automatic NCAA playoff bid by either beating Ferrum on Nov. 6 or winning at Shenandoah on Nov. 13.

“After sitting through last year and not getting to play, it’s just a special team who’s really fired up to get the opportunity to play football again,” senior cornerback Owen Roberts said. “It’s been an awesome year.

“To go out on top would be the best feeling.”

The Generals clinched their sixth straight winning season Saturday. The last time they accomplished that feat was from 1980 through 1985.

The Generals recorded their second shutout win of the season. This is the first time they have had multiple shutout wins in a season since 2004.

“They’re stout up front,” BC rookie coach Scott Lemn said. “We had a bunch of drops and not-well-thrown balls.”

“We’re a team that’s committed to the trenches, so we take a lot of pride in that,” W&L coach Garrett LeRose said of his run defense.

“The big key for us [in pass defense] was being able to create a pass rush with four. … When you can do that effectively and drop seven or drop eight and still get a little bit of pressure, … that makes it really hard.”

The Eagles drove into W&L territory on three series in the first quarter but came away empty-handed. Lemn opted to punt each of those times, even on fourth-and-3 from the W&L 33.

In the second quarter, W&L’s Adam Harter blocked a Garrett Graves punt. W&L’s Robert Harvey recovered the ball at the BC 31.

“I remember seeing the ball in the air after Adam Harter had blocked the punt,” Harvey said. “I regret not just catching the ball and running it back. But luckily after it bounced, I knew I should pick up the ball.”

It looked like W&L was going to go three-and-out on that drive. But instead of declining an illegal-shift penalty and likely forcing W&L to punt, Lemn accepted the penalty and gave W&L another crack at third down. Gabriel Stulce had a 19-yard run on third-and-8 to move the ball to the W&L 49 and keep the drive alive.

“Without being able to see … whether they were getting their punting team together or not, I would say that’s a call for sure that I wish I hadn’t made,” Lemn said of accepting the penalty.

The Eagles later had another chance to end that drive, but Breece had a 2-yard run on fourth-and-1 from the BC 42.

Later in the third, Roberts picked off a Malcolm Anderson pass at the BC 31. Eight plays later, Arturo Rarmirez kicked a 19-yard field goal.

Virginia Tech coach Brent Pry has signed a six-year deal with the school, details on the financial terms

Josh Breece ran for 117 yards and two touchdowns on 25 carries in Saturday’s win over Bridgewater.

W&L's Adam Harter (center) gets his hands on the ball and blocks a punt by Bridgewater's Garrett Graves (right) in the second quarter of Saturday's win.

Coby Kirkland ran for 56 yards for Washington and Lee in Saturday’s win. The Generals ran for 298 yards.