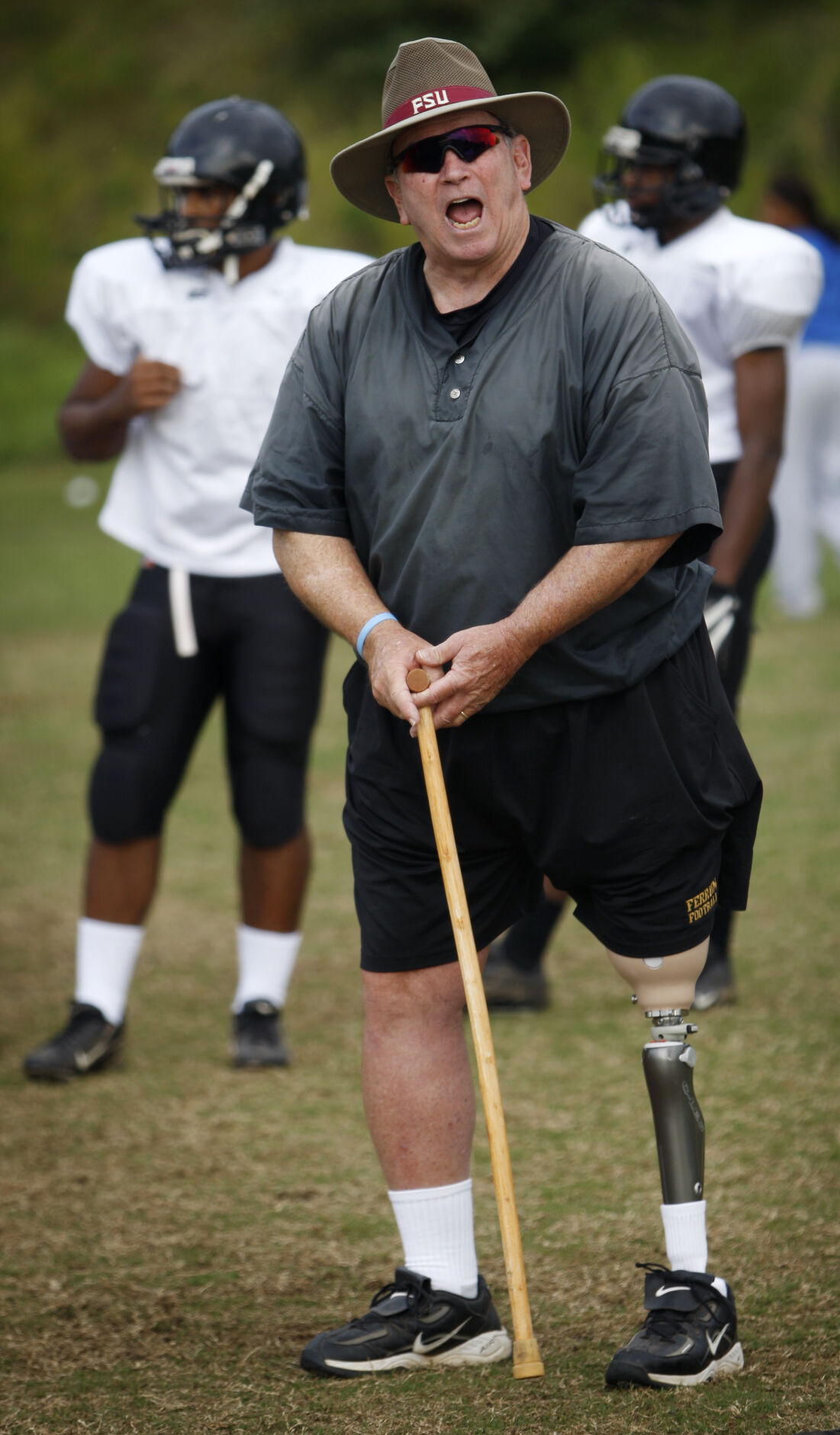 Despite having his lower left leg amputated in June 2008, then-Ferrum assistant Bob Brown returned to work a month later. 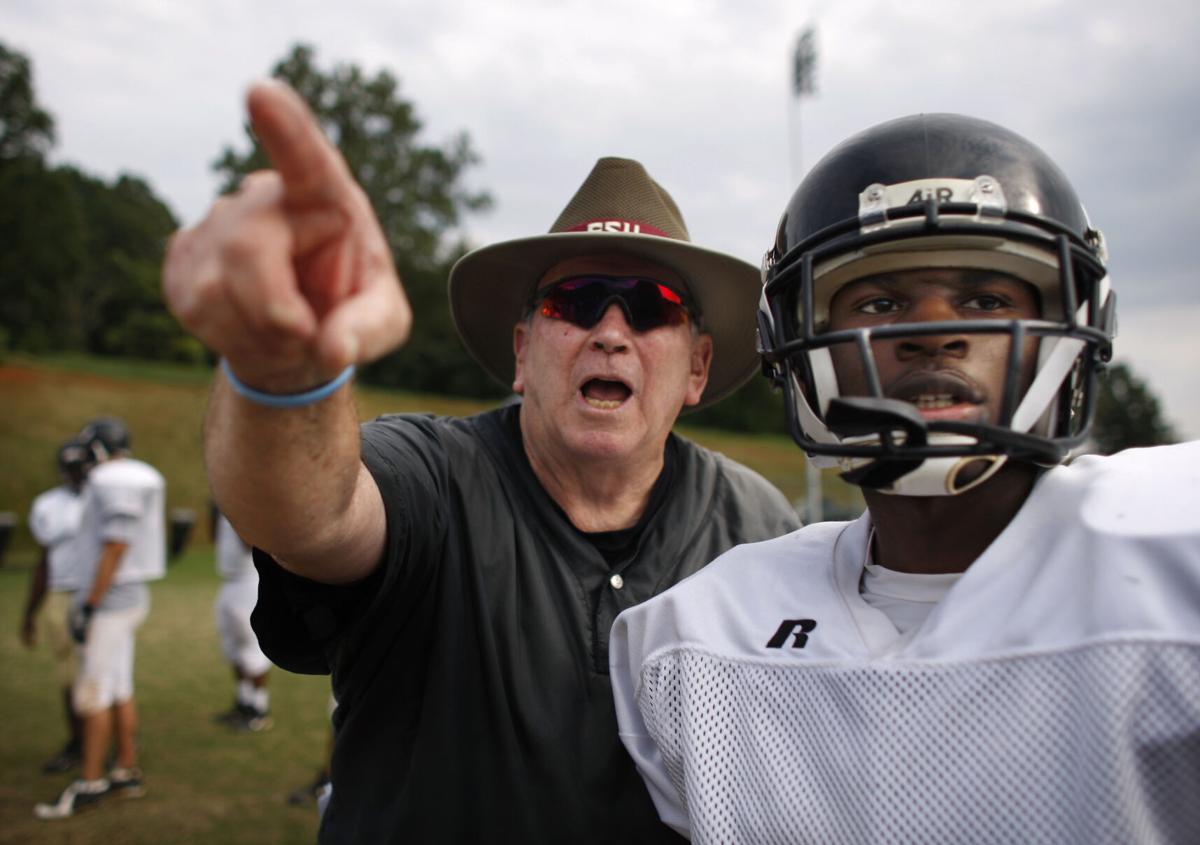 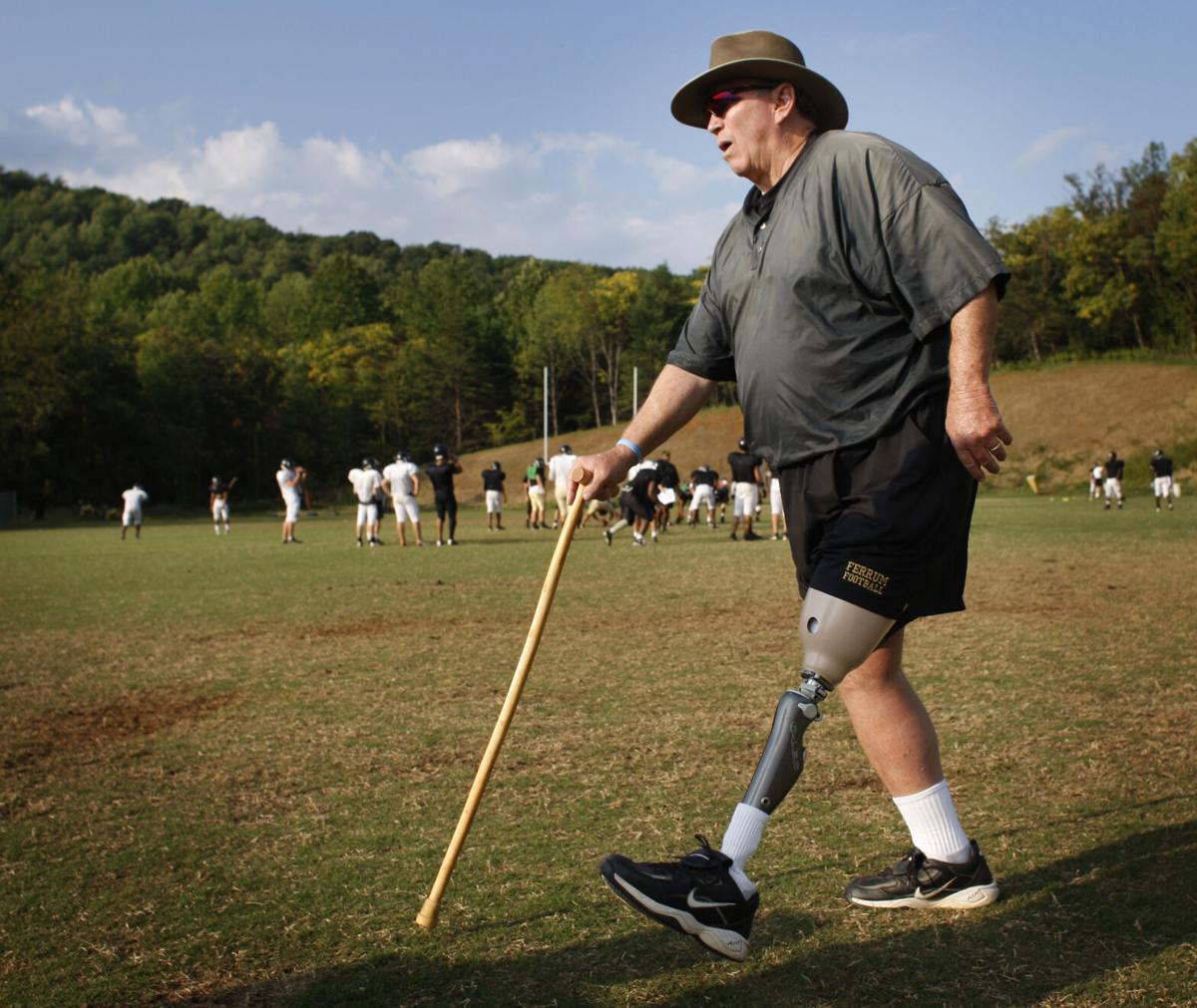 Bob Brown, who was a Ferrum assistant from 2000 to 2018, had a prosthesis and used a cane after his lower left leg was amputated in 2008. 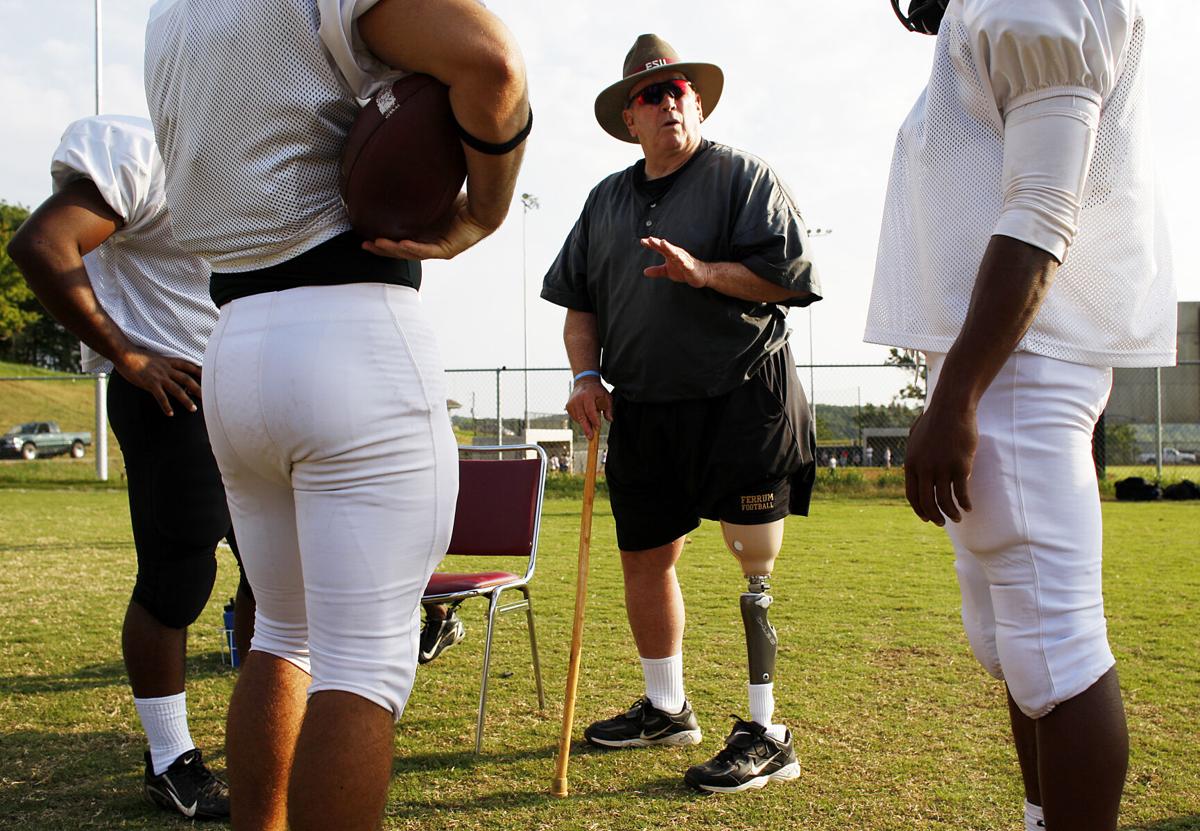 Bob Brown had a prosthesis and used a cane after his lower left leg was amputated in June 2008, but he continued to serve as an assistant football coach. He did not retire until after the 2018 season.

Not even an amputation could keep Bob Brown off the football field.

In 2008, one month after his left leg was amputated above the knee because of an infected knee replacement, Brown returned to his job as an assistant football coach at Ferrum College.

Brown, who spent 19 seasons as a Ferrum assistant and 60 years as a coach before retiring after the 2018 campaign, died of cancer Sunday in hospice care at his Concord, North Carolina, home at the age of 83.

“He was as tough as nails, after what he went through with his leg,” former Ferrum assistant and head coach Dave Harper said Wednesday in a phone interview. “The coaching profession is going to miss him.

“To call him a friend, that humbles the heck out of me.”

Brown had been suffering from prostate cancer that metastasized, said his widow, Judy Brown.

Ferrum, where Bob Brown worked under three head coaches from 2000 through 2018, announced his death Tuesday.

“He said he never worked a day in his life,” Judy Brown said Wednesday. “He coached for 60 years and he loved it so much, he never considered it work.”

Before landing at NCAA Division III member Ferrum, Brown coached in the Division I ranks.

Brown, who grew up in the Hampton area, was an assistant at William and Mary, West Virginia, Texas Tech, South Carolina, Marshall and Ohio University.

He was South Carolina’s running backs coach for the junior and senior seasons of star running back George Rogers. As a senior in 1980, Rogers won the Heisman Trophy.

Brown displayed a photo of Rogers on his office wall at Ferrum. Rogers visited Ferrum from time to time during Brown’s years with the Panthers.

“He treated me just like I was his son,” Rogers told The Roanoke Times in 2008. “I will always remember him not only as a good coach but as a father figure. He taught me a lot.”

Brown’s second stint as an assistant at Davidson ended when the staff was let go after the 1999 season. Harper, then a Ferrum assistant, had once worked with Brown at Davidson. So Harper suggested to then-Ferrum head coach Dave Davis that he hire Brown.

“[Brown] became a friend,” said Davis, who retired after the 2010 season. “He did a great job. The kids loved him. … He had a tremendous football mind, and he paid a lot of attention to details.”

Brown did not mind dropping down to Division III football.

Brown was a “class act” with the Ferrum players, said Harper.

“It didn’t matter if you were a five-star athlete, won a Heisman Trophy or you didn’t get any playing time. He still treated you with respect,” said Harper, now the coach at St. Andrews University.

In June 2000, shortly before moving to Ferrum, Brown had his arthritic left knee replaced. It was the first of nine knee operations that he would endure.

Brown had to have his first artificial joint replaced in 2002 because of an infection. In the fall of 2007, the infection returned.

So in March 2008, he had an operation to remove the joint. He was given a temporary implant while he waited for the infection to heal.

He was stuck at home, in bed, for months. But he still made phone calls to prospective recruits. The coaches held meetings at his house.

The infection never went entirely away, which meant Brown couldn’t have another artificial knee installed.

Brown saw amputation as a way to finally get back to his life. His leg was amputated several inches above his knee in June 2008.

He had a prosthesis, and used a cane. He sometimes sat in a chair during practice. But he was still able to serve as Ferrum’s quarterbacks coach.

Ferrum’s practice field is on a hill, so then-athletic director Abe Naff got Brown a golf cart so he could get to it.

When Harper succeeded Davis as head coach after the 2010 season, he kept Brown on the staff. Brown eventually shifted to running backs coach.

Rob Grande replaced Harper after the 2015 season, but Brown remained on the staff.

“A mountain of a man,” said Grande, now an offensive analyst at Iowa State. “Really taught me a lot.

“He found a way to make an impact no matter what limitations he wound up having.”

Brown eventually had to use a motorized wheelchair, but he continued to coach.

“He paid so much attention to detail and the little things, whether it be footwork or the positioning of your shoulders,” said Brian Mann, who was a star running back at Ferrum from 2016 to 2019. “I probably wouldn’t have been as successful if it wasn’t for him. He had a huge impact on me, on and off the football field.”

“He was a role model, having the experience and obviously coaching some big-name guys,” said Clifford, who was on the Panthers’ roster from 2016 to 2019. “Coach Brown knew everybody.

“When he talked, you’d listen because you knew how much he knew.”

In addition to his wife, Brown is survived by two children and four grandchildren. His funeral will be held June 12 in North Carolina.

Plus baseball, tennis and more.

On the evening of July 20, the ACC saluted retired commissioner John Swofford with a soirée at the Charlotte Westin hotel. More than 200 invited guests attended, including SEC commissioner Greg Sankey.

In the region: Carlik Jones lands with Mavericks

Plus more news on undrafted free agents, plus golf and Olympic news.

Despite having his lower left leg amputated in June 2008, then-Ferrum assistant Bob Brown returned to work a month later.

Bob Brown, who was a Ferrum assistant from 2000 to 2018, had a prosthesis and used a cane after his lower left leg was amputated in 2008.

Bob Brown had a prosthesis and used a cane after his lower left leg was amputated in June 2008, but he continued to serve as an assistant football coach. He did not retire until after the 2018 season.