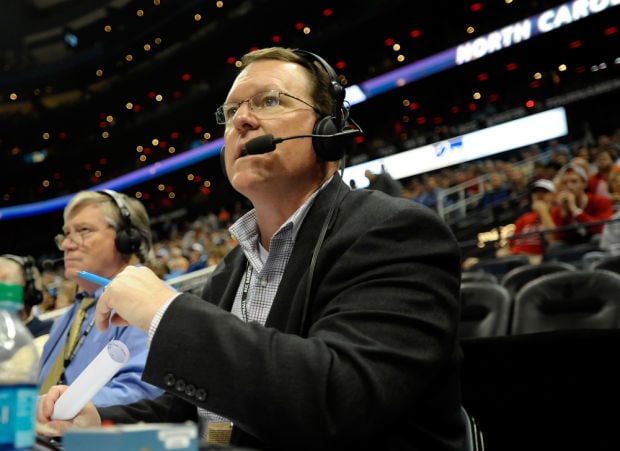 Courtesy of Georgia Tech;Wes Durham, who once was the radio voice of Radford University, is leaving his job as Georgia Tech's radio voice to do TV play-by-play for ACC football and basketball.

Wes Durham is a 47-year-old rookie.

Durham, who was once the voice of Radford University basketball, will be doing football play-by-play on television this fall.

“It had to be something on a larger scale for me to make the jump from Georgia Tech, and fortunately it was. It’s an unbelievable opportunity,” Durham said. “The emotional decision was a lot harder than the professional decision.

“But I didn’t want to have any regrets. I did not want my career to end and not have had at least an opportunity to do television on a big scale.”

Durham will do a football game every Saturday afternoon. His color commentator will be another rookie to the ACC broadcasts — former Navy player and ex-UFC fighter Brian Stann.

Durham will also do 30 ACC basketball telecasts for the cable package. He will team with a variety of analysts for basketball, including Dan Bonner, Cory Alexander and Mike Gminski.

He will also announce some ACC baseball games in the spring.

Durham was hired at Radford after graduating from Elon in 1988. He spent three basketball seasons announcing RU games. After stops at Marshall and Vanderbilt, he got the Georgia Tech football and basketball job.

Although he will no longer be the voice of Georgia Tech, Durham will continue with his other radio job as the play-by-play announcer for the Atlanta Falcons. He is entering his 10th season with the Falcons.

Durham does have some television experience, including college baseball play-by-play, but he has never had a regular football or basketball TV play-by-play role. There will be an adjustment as he moves from radio to TV.

“You’ve got the visual medium, so there’s not nearly as much description required,” Durham said. “You’re not the voice of the game, so to speak.

“You have time with the visual medium to tell stories that even on radio you might not have because the game continues to move. On television, you can tell those stories because people can see the game … while the story’s being told.”

Brad Zahar is a Cleveland Browns fan, but he has been getting accustomed to the football teams in this area since joining WDBJ (Channel 7) as a sports reporter last month.

Zahar, who grew up in suburban Cleveland, graduated from Ohio University in 2011.

He was the weekend sports anchor and a weekday sports reporter for WVVA-TV in Bluefield, W.Va., before being hired by WDBJ. His assignments for WVVA included covering Virginia Tech in the Sugar Bowl in January 2012.

“I always liked sports, and I enjoy talking and meeting new people,” he said.

“I like doing sports. … I don’t know if I could ever be a news reporter because I like focusing on the positive aspect of things a lot of times.”

Zahar, 23, has done reports on high school football teams and from Tech and Virginia football practices since joining WDBJ. He replaced Carl Deffenbaugh, who left the CBS affiliate to join a TV station in South Bend, Ind.

The morning radio show that former Cave Spring, UVa and NFL star Tiki Barber has co-hosted since January can now be heard in the New River Valley.

Barber co-hosts a show on the new CBS Sports Radio network from 6 to 9 a.m. weekdays alongside Dana Jacobson and Brandon Tierney. WWBU-FM 101.7 in Radford began airing the show this month.

n Bailey is getting a second show on WWBU.

Bailey and WDBJ sports anchor Travis Wells will co-host an hour-long high school football preview show, “Friday Football Early Edition,” at 5:30 p.m. every Friday on WWBU. The show will also air on several other stations, including WGMN-AM 1240 in Roanoke and WBLT-AM 1350 in Bedford.

n The “Hokie Playback” football reruns of televised games will expand this season from just home games to most road games as well.

NBA Finals: What is the best result for the books?

The former Hokies running back won the ACC title in the 100 meters.

Virginia Tech track and field standout Jacory Patterson announced on social media last weekend that he is transferring to Florida.

Devin Ortiz's walk-off home run in the 10th inning sends the Virginia baseball team to the Super Regionals for the first time since 2015.

Courtesy of Georgia Tech;Wes Durham, who once was the radio voice of Radford University, is leaving his job as Georgia Tech's radio voice to do TV play-by-play for ACC football and basketball.