Roberts succeeds his former boss Jonathan Hadra, who stepped down as VMI’s coach last week to become an assistant at Old Dominion.

Roberts, a 2011 VMI graduate, had been a VMI assistant since 2017. He had risen from volunteer assistant to pitching coach to associate head coach. Josh Winder and Zak Kent were among his VMI pitching pupils.

He was both a shortstop and a pitcher for the Keydets. He earned All-Big South honors as a senior shortstop in 2011, when he hit .347 with 46 runs and 37 RBIs. He also had four saves that year.

Roberts was chosen by Oakland in the 26th round of the 2011 Major League Baseball draft. He spent five years in the minor leagues, seeing action both in the infield and on the mound.

His older brother Mike also played baseball for VMI, while their cousin Will Roberts played for Virginia.

The Mount St. Mary’s graduate transfer was 1-2 with a 5.40 ERA, 40 strikeouts and nine walks in 35 innings for the Hokies this year. He was not chosen in last month’s Major League Baseball draft.

Geber had been pitching this summer in the MLB Draft League. For the first part of the summer, that league served as a showcase for draft-eligible players. After the draft, the league transitioned to a pro league for undrafted players. Geber pitched for the Frederick Keys during both phases of the league.

Bourne helped Jefferson Forest make the state title game as a senior in 2015.

Bourne pitched for James Madison from 2016-19, during part of Guerra’s seven-year stint as a JMU assistant. The two worked together at JMU in 2021, when Bourne was the Dukes’ director of pitching development.

Virginia Tech opened up practice on Friday afternoon, here's some observations from the portions of practice open to the media...

Virginia Tech's 2022 fall camp is underway and we were at a portion of Wednesday's practice, here's what we saw...

Virginia Tech is having 'daily discussions' about what to do with open scholarship spot...

In the region: Draft pick commits to Virginia Tech

Kuhn resigned from Radford in June after three seasons as the Highlanders' head coach.

Virginia Tech is eager to see how they can put Connor Blumrick's skillset to use this fall...

Virginia Tech coach Brent Pry is a "phase guy", what that means for fall camp...

Sam Roberts, once a standout player for VMI, is the Keydets' new head baseball coach. 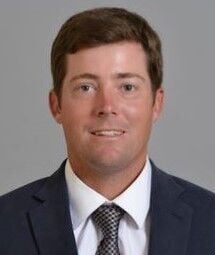