UVa graduate Melissa Stark, shown at Green Bay’s stadium before a “Sunday Night Football” game, is in her first season on NBC’s NFL game of the week.

Melissa Stark, shown this week in Denver on "Sunday Night Football," is in her first season on NBC's NFL game of the week. 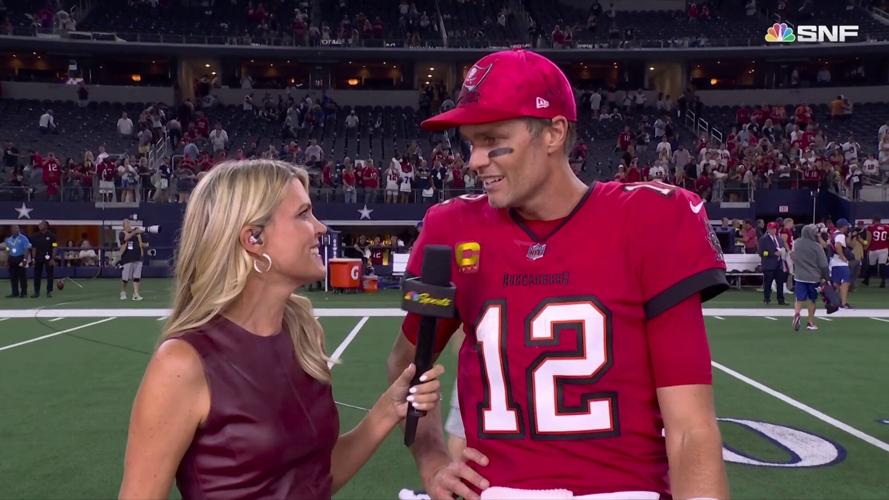 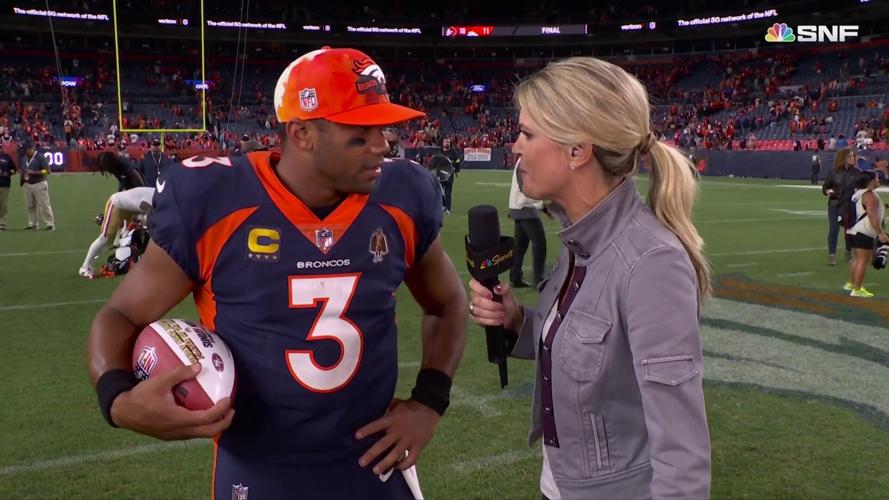 Melissa Stark (right) worked with Al Michaels (left) and the late John Madden (center) for the 2002 "Monday Night Football" season. It was Stark's third and final season on those telecasts. The three are shown speaking to the press in 2002. 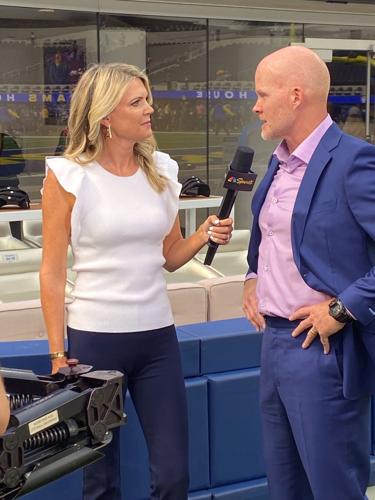 UVa graduate Melissa Stark interviews Buffalo coach Sean McDermott before NBC's telecast of the NFL season opener between the Bills and the Los Angeles Rams. That was a rare Thursday night game for NBC, which airs "Sunday Night Football."

But the University of Virginia graduate walked away from her high-profile job to be a mom.

Now she is back on prime-time television as the new sideline reporter for NBC’s “Sunday Night Football.”

“I love it. For me, life has come full circle,” Stark, 48, said in a phone interview last week. “To go back to prime-time sidelines 20 years later is incredible.”

Stark was the sideline reporter for “Monday Night Football” from the 2000 season through the 2002 season. But in 2003, pregnant with her first child, she decided not to return for the 2003 season.

“They said, ‘You could come back in October or November.’ And I said, … ‘I think I’m going to want to be home with this kid,’” Stark said.

Stark worked for NBC News and NBC Sports from 2003-08. But as her family grew to four children, she chose motherhood over that job, too.

In 2011, she joined NFL Network for a job that required less time and travel.

And this season she has returned to NBC, succeeding Michele Tafoya as the sideline reporter for “Sunday Night Football.” Stark’s kids are older now, but she is still juggling work and family.

“It’s a constant juggling act as a mom with a career, especially one that you’re on the road so much,” she said.

Stark graduated from Virginia in 1995. She has fond memories of UVa — and not just of interviewing football and basketball players for UVa’s weekly coaches TV show.

“My best friends from life are from UVa,” Stark said. “UVa was the perfect school to go to. … I was so into academics and studying, … but then it had the whole social life.”

She and nine of her UVa friends still get together once or twice a year, although she had to miss the most recent gathering because of “Sunday Night Football.”

“I miss out on a lot because of my job,” she said.

After a year at Home Team Sports (now known as NBC Sports Washington), she joined ESPN in 1996.

At the age of 26, she became the sideline reporter for ABC’s “Monday Night Football” in 2000.

“When I did ‘Monday Night Football,’ there weren’t many women in sports,” she said. “That sort of got into your head a little bit just because it was so rare.

“Now … there are so many more women in sports, I don’t even think about it.”

During the 2002 season, the late “60 Minutes” commentator Andy Rooney gave an interview in which he criticized female sideline reporters.

“It was obviously directed toward me. So there was a lot of that, where I think maybe insecurities came in,” Stark said.

She was a guest teacher at a UVa broadcasting class earlier this year, before NBC hired her. She told them she wished she knew back in her “Monday Night Football” years what she knows now.

A student in the class asked her what she would have told herself.

“That I belonged,” Stark told her.

“I was young … and I was working with legends,” Stark said. “John was incredible. We became amazing friends and he was such a mentor to me. But it was different because I didn’t feel like I was on their level.”

Stark was among those interviewed for the Fox Sports documentary “All Madden” that aired last year.

“John and I were very close,” Stark said last week. “He absolutely took me under his wing.

“He believed in me, and that gave me so much confidence.”

‘The middle of the action’

She joined NBC in 2003. She served as the national correspondent for the “Today” show, as well as a host for “Early Today,” a fill-in news anchor for “Today” and an anchor for MSNBC. She also was a part of the NBC Sports coverage of three Olympics.

Stark said being the “Today” show’s national correspondent was difficult.

“As a mom, it’s very hard to cover news, in my opinion, because it’s breaking and you have no sense of a schedule,” she said. “That just didn’t work for me and our family.”

After leaving NBC, she resurfaced at the NFL Network in 2011 as a host and reporter. When the NFL Network began doing some December games in recent years, Stark served as sideline reporter.

“I’m a reporter at heart,” she said. “I like finding information that nobody else has. There’s nothing like the adrenaline of being on the sideline in the middle of the action. Nothing.”

Stark said the challenge of her job is finding unique stories that won’t feel forced in the broadcast.

“I’m going to … try and track down any information that you might not know about Aaron Rodgers or about a Tom Brady or a Russell Wilson,” she said. “I’ll try and talk to a high school coach or a father, … get stories that will resonate with the viewer so they’ll say, ‘Oh, I didn’t know that.’”

The travel required for “Sunday Night Football” is hard for her, though, because she has to be away from her husband and kids in New Jersey. She has to arrive on Thursday nights in the city that is hosting the game so she can be at the home team’s practice Friday and meet with the home team. She meets with the visiting team on Saturdays.

“As a mom, I’m so involved with my kids, so I don’t take that part lightly at all, that I’m gone from them for more than half the week,” she said.

Her oldest son is now a freshman at her alma mater.

She won’t be able to attend UVa’s family weekend next month because of her new job. But she is glad her son is there.

Other job: has worked for NFL Network since 2011.

Their season cut short, Hokies agree 'it's bigger than ball'

Last week, in the wake of the shooting deaths of three Virginia football players, Virginia Tech coaches and players knew their season might be…

AD Jim Miller said he was surprised by the coach's decision.

UVa and Virginia Tech have played each season since 1970 and the series dates back to 1895.

"It pisses me off so bad I can't breathe," Hokies coach Mike Young said of the loss. "

LAS VEGAS – In the final minute of No. 16 Virginia’s upset of No. 5 Baylor on Friday, UVa junior center Kadin Shedrick found himself standing on the court, thinking about the three football players who had been shot to death on campus Sunday. He found himself thinking about his friend, D’Sean Perry, who was one of those victims.

Virginia got the tough tests it sought in Las Vegas tournament, a pair of big wins

CHARLOTTESVILLE — After his team’s championship game victory over Illinois on Sunday in the Continental Tire Main Event in Las Vegas, Virginia…

UVa graduate Melissa Stark, shown at Green Bay’s stadium before a “Sunday Night Football” game, is in her first season on NBC’s NFL game of the week.

Melissa Stark, shown this week in Denver on "Sunday Night Football," is in her first season on NBC's NFL game of the week.

Melissa Stark (right) worked with Al Michaels (left) and the late John Madden (center) for the 2002 "Monday Night Football" season. It was Stark's third and final season on those telecasts. The three are shown speaking to the press in 2002.

UVa graduate Melissa Stark interviews Buffalo coach Sean McDermott before NBC's telecast of the NFL season opener between the Bills and the Los Angeles Rams. That was a rare Thursday night game for NBC, which airs "Sunday Night Football."