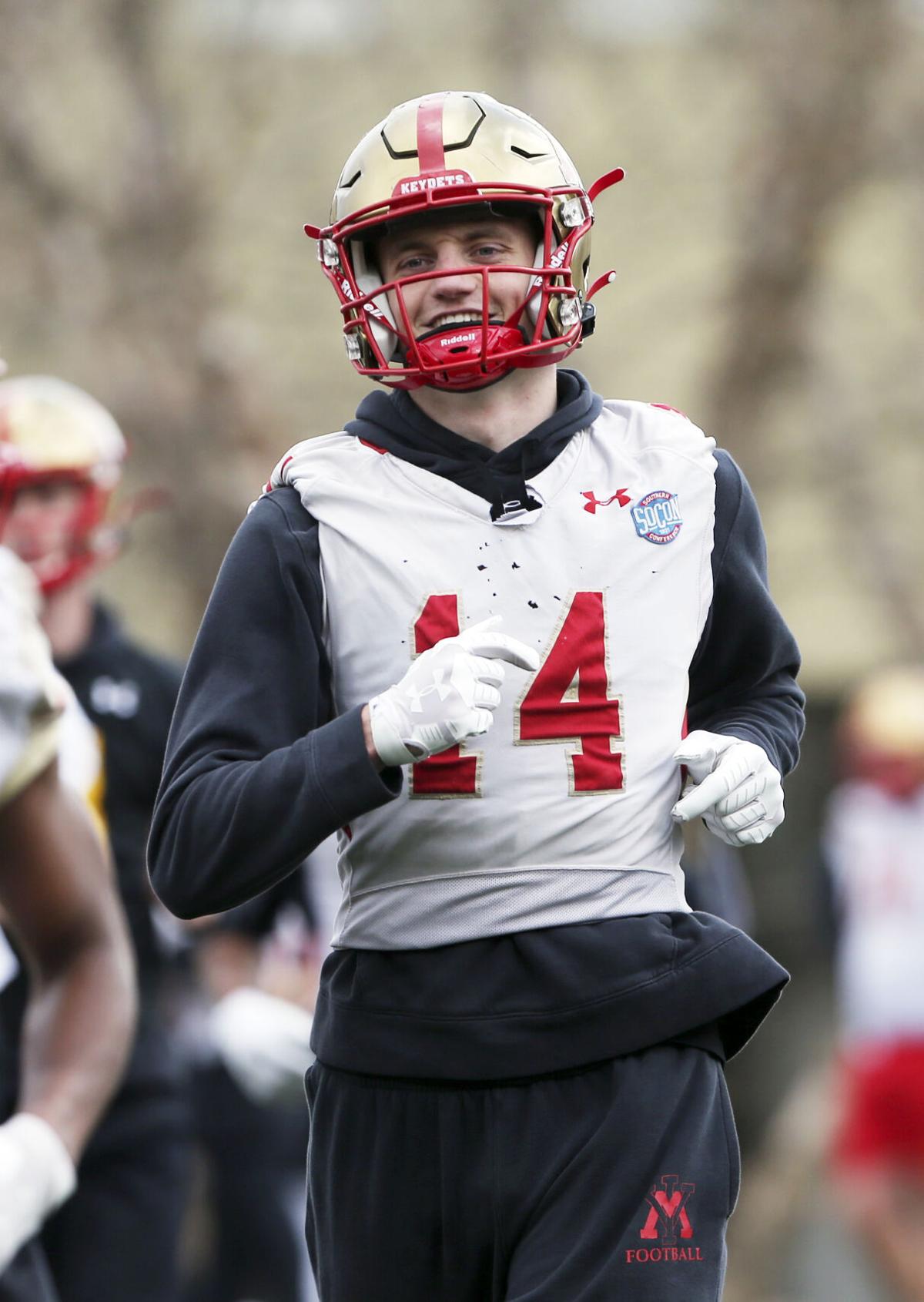 VMI receiver Jakob Herres, shown in practice Thursday, has 48 catches for 583 yards and six touchdowns for the 5-0 Keydets this spring. 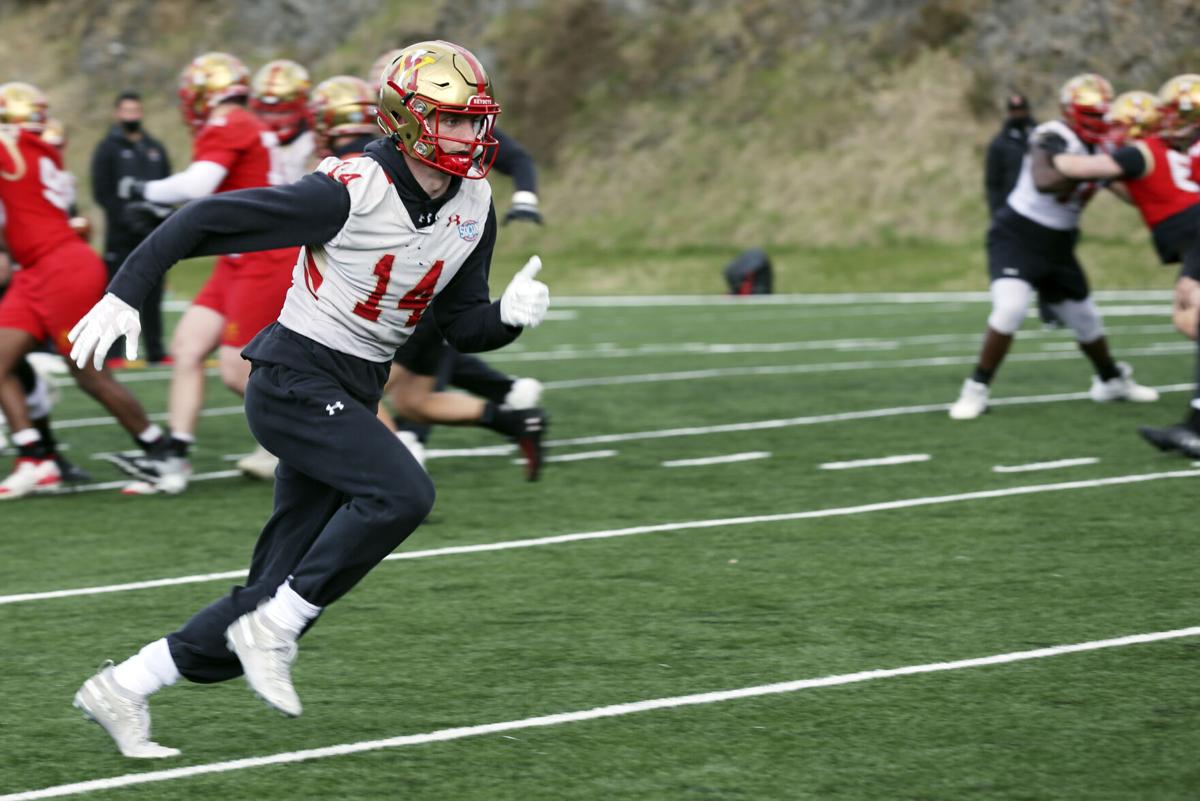 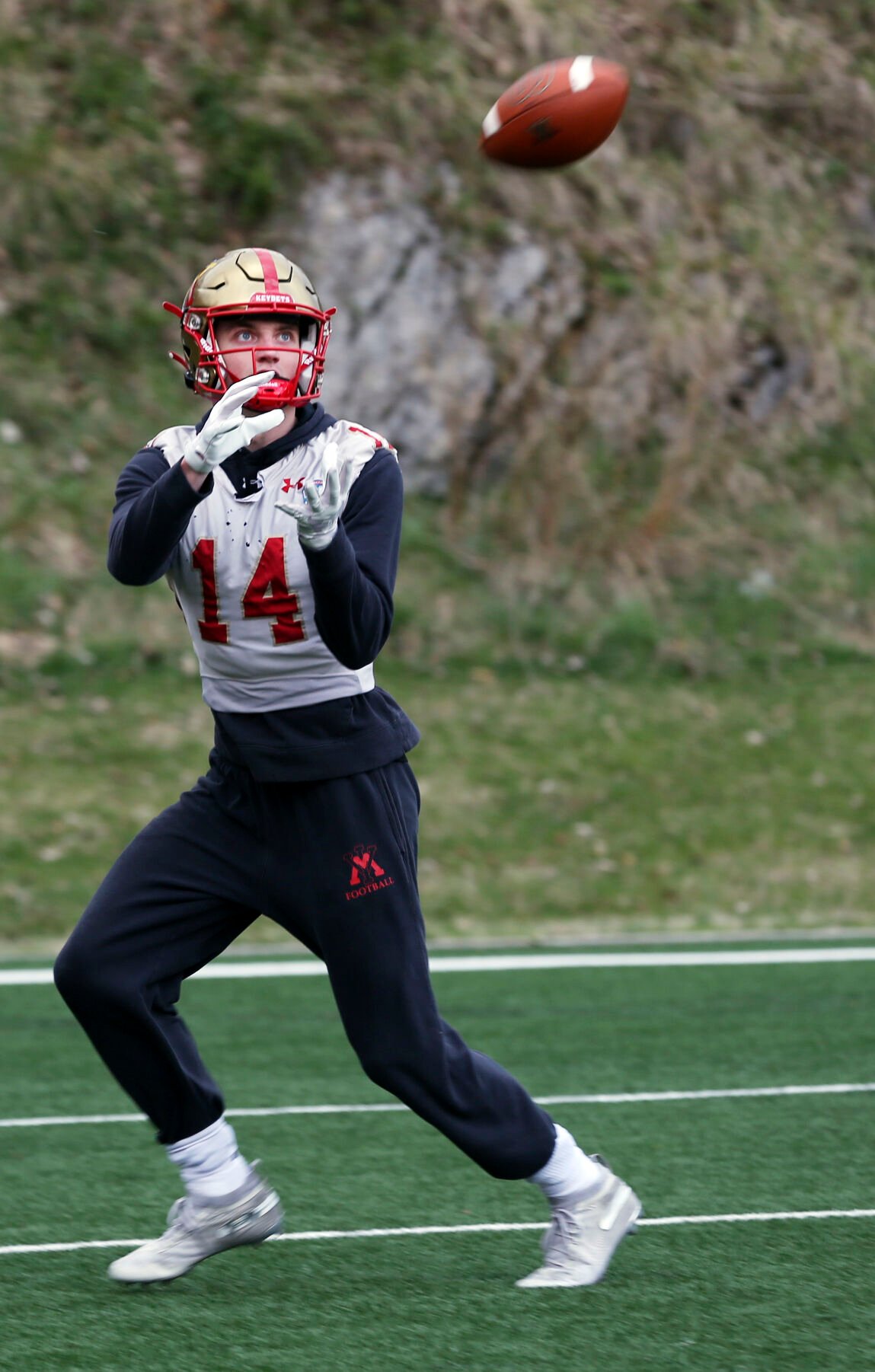 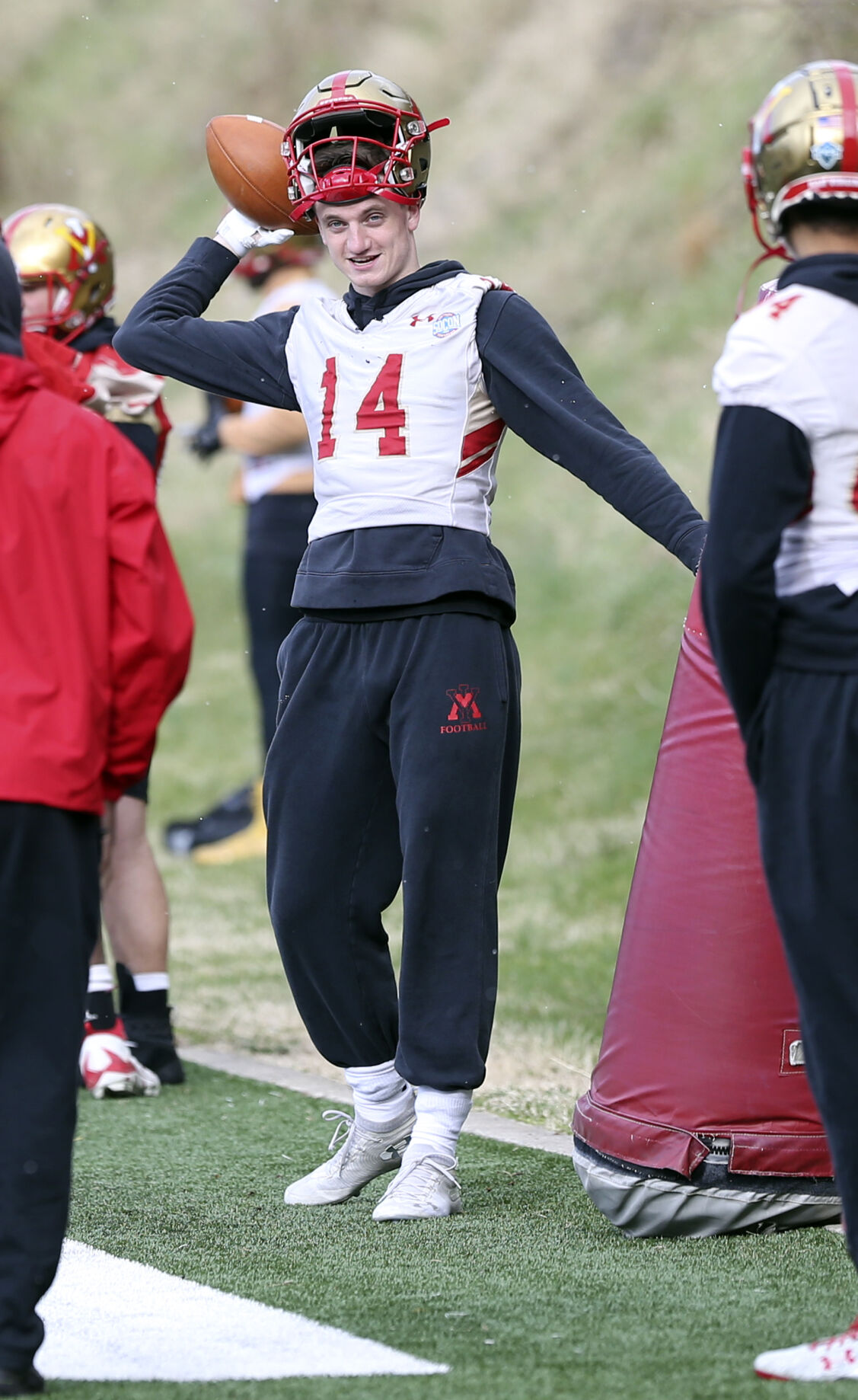 VMI receiver Jakob Herres (center), shown at practice Thursday, made the Southern Conference all-freshman team in 2018 and made the All-SoCon first team in 2019. 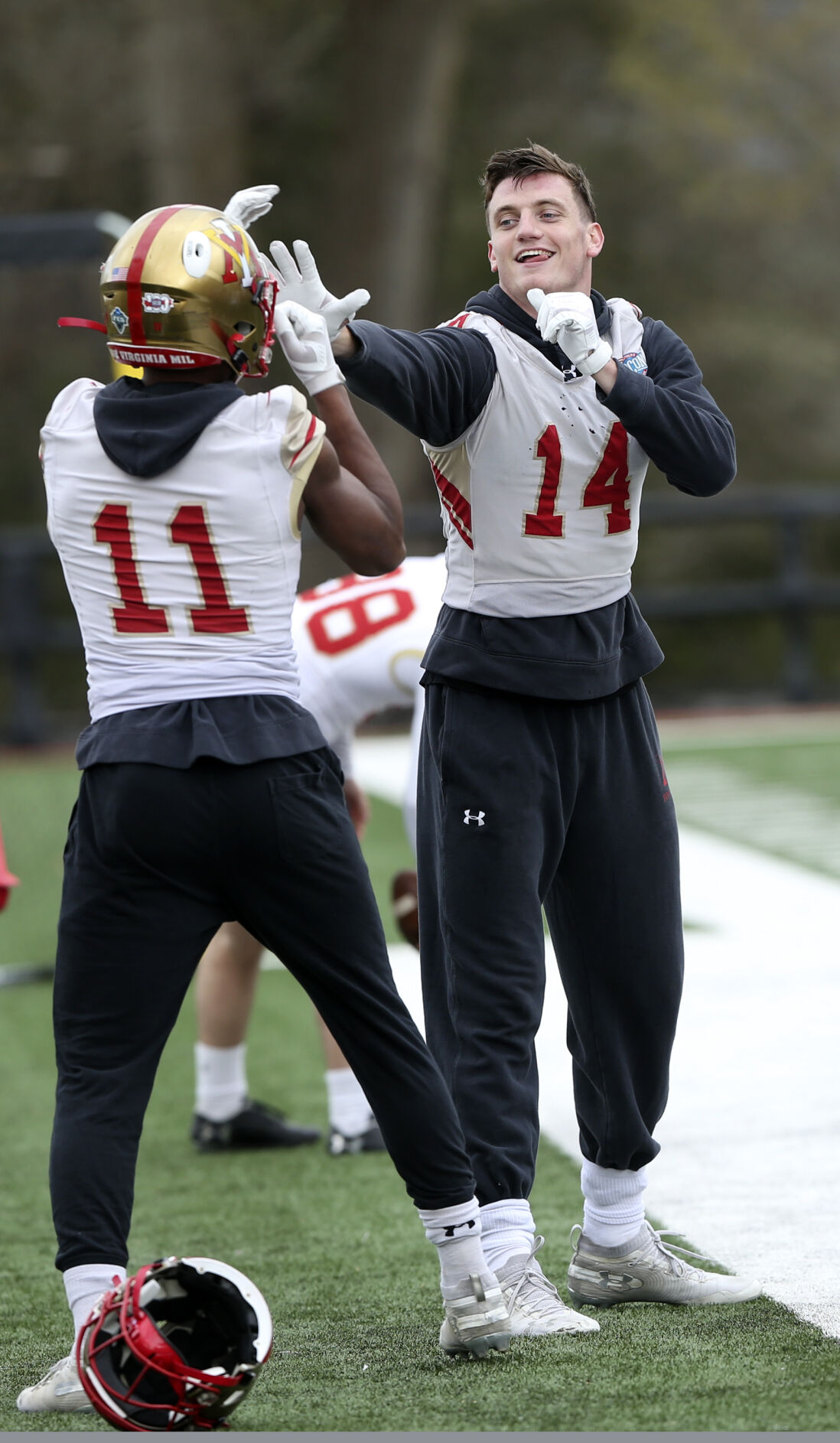 VMI receiver Jakob Herres (right), shown joking around with a teammate at practice Thursday, has helped the 10th-ranked Keydets go 5-0 this season. VMI can clinch a playoff bid Saturday.

It looked like the VMI football team would be losing one of the best receivers in the Southern Conference.

“This school here is hard,” the junior standout said this week in a phone interview. “Being at home [because of the coronavirus pandemic] kind of made me open my eyes a little bit. I kind of wanted to explore some options.”

But two weeks later, Herres decided to return to the Keydets.

“I got a few offers, but nothing to the point where it was going to make me leave,” he said. “At the end of the day, it just never sat right with me, leaving my teammates and leaving the school that I worked so hard for.

“I have everything I need here. It’s going to be a great degree for me when I am finished, and if football doesn’t work out for me, I’m going to be set up. But from a football standpoint, it obviously has been working out for me and the team.”

The 6-foot-4, 211-pound Herres ranks fourth in the FCS in receptions per game (9.6), receiving yards (583) and touchdown catches (six) this spring. He had 15 catches in last weekend’s win at Wofford, earning FCS national offensive player of the week honors.

VMI, which has never made the FCS playoffs, would clinch the SoCon’s automatic FCS playoff bid by either beating East Tennessee State (3-1, 3-1 with two games left) on Saturday or by winning its regular-season finale against The Citadel. A win in either game would bring VMI its first SoCon crown since 1977.

“I really feel like I made the right decision to come back,” Herres said. “I’m just grateful to be a part of it. Sometimes I’m at a loss for words.”

Herres was named Jakob after his great-grandfather Jakub Breef, who was born in Poland.

Herres grew up in Easton, Pennsylvania. He began playing flag football when he was 5 years old.

At first he was a running back, but he moved to receiver in middle school after a growth spurt.

Herres likes the competitive nature of the receiver position.

“It’s the ability to match up one-on-one with somebody,” he said. “Either the defender’s going to get it or I’m going to get it. I really like that pressure.”

Herres played both football and basketball in high school. He was recruited by a few NCAA Division III basketball programs. But Herres, an all-state receiver, wanted to play college football.

VMI football coach Scott Wachenheim saw film of Herres and was intrigued by Herres’ height because 6-5 receiver Riley Stapleton was a JMU standout at the time. So Wachnheim offered Herres a scholarship — even though VMI’s receivers coach at the time did not think Herres had enough speed.

Herres’ only Division I scholarship offers were from Army and VMI. Army employs a run-heavy option offense, so Herres picked VMI.

“I wanted to catch some balls,” he said. “I didn’t want to be blocking all the time.”

He verbally committed to VMI in January 2018, even though the Keydets were coming off an 0-11 season.

“I thought it would be cool to … start changing the program around,” he said.

He did not fret about choosing a military school.

His grandfather, Francis Herres, 98, served in the Army Air Corps in World War II. He was a tail gunner in a B-24 bomber that was shot down, and was a prisoner of war in Romania.

“He always looked up to his grandfather,” Herres’ father, Joe Herres, said. “He liked hearing his stories about the war.”

Herres had 27 catches for 437 yards and five TDs in VMI’s pass-happy Air Raid offense in 2018, when the Keydets went 1-10. Herres made the SoCon all-freshman team.

His height makes him a hard matchup for defensive backs.

“I’ve never come across a DB that was as big as me, so … I try to use that to my advantage, … trying to be physical with them and go up for jump balls,” Herres said.

Herres became quarterback Reece Udinski’s favorite target in 2019, when he led the SoCon in catches (72), receiving yards (1,091) and TD catches (eight). He made the All-SoCon first team.

“All kids dream about a Power Five school,” his father said. “With the year he had, … he had better tape and I think he just wanted to test the waters.”

Herres’ father said FBS and FCS schools reached out to his son.

So Wachenheim recruited Herres all over again.

“We just kept telling him how much we wanted him and how much we loved him,” Wachenheim said. “A couple of the schools that were talking to him, if he was my son, I would tell him to take it. But he made the decision to come back.”

“He’s drawn to his team,” Herres’ father said. “He wanted to come back and finish what he started.”

VMI did not play last fall because of the pandemic, but this has been a memorable spring for Herres and his teammates.

The FCS playoff selection committee ranked VMI No. 8 in its initial rankings Thursday night; the playoff field will be announced April 18.

Udinski suffered a knee injury early in the fourth quarter — an injury that turned out to be a torn ACL. But he finished that game.

“Reece being able to do what he did on a torn ACL was just amazing to watch and be a part of,” Herres said.

It was the final game of Udinski’s VMI career.

Redshirt freshman quarterback Seth Morgan made his starting debut in last weekend’s 36-31 victory at Wofford. He threw a 14-yard TD pass to Herres with 35 seconds left to give VMI the win.

Herres had 15 catches (one shy of the school record) for 207 yards and three TDs in that game.

“We just really wanted to make sure that [Morgan] wasn’t scared to get us the ball, that if he throws it up, we’re going to go get it,” Herres said.

“[Udinski’s injury was] obviously a big blow for Reece and the team, and I hope everything goes well with his surgery, but we still have a championship to go after and I think Seth is going to lead us there.”

Herres plans to return to VMI in the fall for his senior season.

But he said that after he graduates, he will probably look to join a new school as a graduate transfer for the 2022 season. The NCAA Division I Council has given all of this school year’s fall-sports athletes an extra year of eligibility.

“Try to go to a bigger school [in 2022] and try to prove myself there more and maybe get some draft looks,” he said.

“Jake is an unbelievable competitor,” Wachenheim said. “The only person I’ve coached [who is] as competitive of a route runner as Jake Herres is Chris Cooley when I was with the Washington [Football Team]. Chris Cooley wanted to win every route and would be angry if he didn’t win his one-on-one, and Jake Herres is the same way.”

Stock was the last VMI player to be chosen in the NFL Draft; he was selected in 1989.

“Stock went and played in the NFL,” Wachenheim said. “Jake’s got that kind of talent.”

Herres does want to play in the NFL. But first, he wants to help VMI make the FCS playoffs.

“You work so hard to win these games, and what we’ve done is just really amazing,” he said.

This season: 48 catches for 583 yards and six TDs, including 29 catches for 373 yards and five TDs the past two games combined; reigning FCS and SoCon offensive player of the week

VMI receiver Jakob Herres, shown in practice Thursday, has 48 catches for 583 yards and six touchdowns for the 5-0 Keydets this spring.

VMI receiver Jakob Herres (center), shown at practice Thursday, made the Southern Conference all-freshman team in 2018 and made the All-SoCon first team in 2019.

VMI receiver Jakob Herres (right), shown joking around with a teammate at practice Thursday, has helped the 10th-ranked Keydets go 5-0 this season. VMI can clinch a playoff bid Saturday.