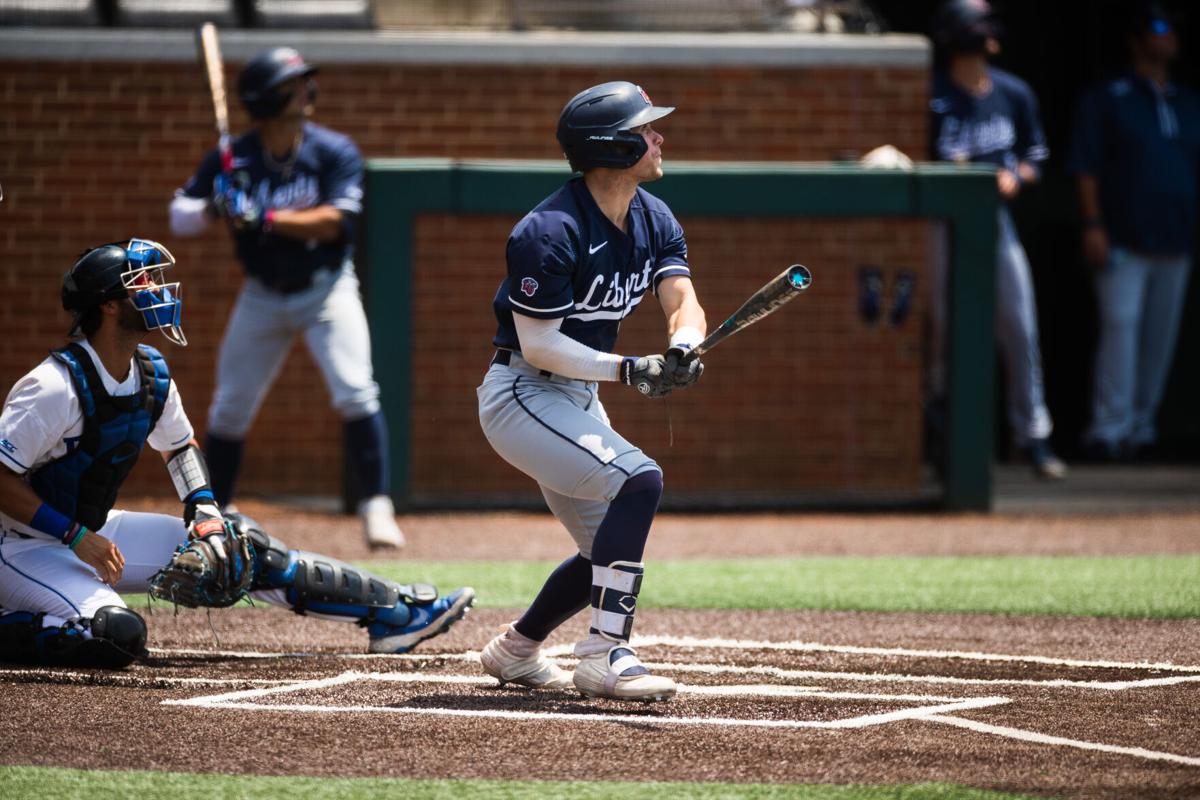 Liberty designated hitter Brady Gulakowski follows the flight of his third-inning home run in the Flames’ Knoxville Regional opener against Duke on Friday.

Odicci Alexander pitched another complete game and Kate Gordon belted another homer to lead the James Madison softball team to a 2-1 win over fifth-seeded Oklahoma State in the Women’s College World Series on Friday night in Oklahoma City.

JMU (41-2) improved to 2-0 in the double-elimination event, becoming the first unseeded team to ever win its first two games in the Women’s College World Series.

The Dukes are just one win away from the finals. They will play Oklahoma or UCLA at 1 p.m. Sunday. If JMU wins that game, it will advance to the finals. If JMU loses that Sunday afternoon game, the teams will meet again at 7 p.m. Sunday for that berth in the finals.

JMU scored once in the bottom of the first. Alexander walked and Logan Newton singled. After Madison Naujokas singled, Eberle made an error that allowed Alexander to score.

Gordon homered in the third to extend the lead to 2-0.

The Cowgirls had runners on second and third with one out in the seventh. But Odicci Alexander fielded Chelsea Alexander’s squeeze bunt, dove and tagged out Scotland David as David was making a head-first slide at home. Kiley Naomi popped up to end the game.

SAN FRANCISCO — Virginia Tech’s Emily Mahar shot a 4-over 75 on Friday at the U.S. Women’s Open at The Olympic Club, putting her at 10-over 152 after two rounds. She was not projected to make the cut.

Brady Gulakowski hit three-run home runs in the third and fourth innings to give Liberty a 10-run advantage, and the Flames held on to defeat Duke on the opening day of a double-elimination NCAA regional in Knoxville, Tennessee.

The Flames (40-14) reached the 40-win mark for the sixth time in program history. They will face Tennessee at 6 p.m. Saturday.

Gulakowski stepped to the plate in the third inning mired in a 2-for-26 slump. But he turned on an 0-1 offering from Duke starter Jack Carey (4-3) and lofted a three-run homer over the left-field wall to give the Flames a 5-1 lead.

He repeated the feat again in the fourth against relief pitcher Matt Dockman, this time sending a 1-0 pitch over the wall in right center to put the Flames ahead 11-1. Both homers came with two outs.

Flames starter Trevor DeLaite pitched 7 2/3 innings to improve to 12-1 and set the program record for victories in a season.

UVa's Paige Madden was 2nd in the 400 freestyle final.

His helmet came off when he swung and missed.

Carlik Jones and Mac McClung are also on the list.

Liberty designated hitter Brady Gulakowski follows the flight of his third-inning home run in the Flames’ Knoxville Regional opener against Duke on Friday.