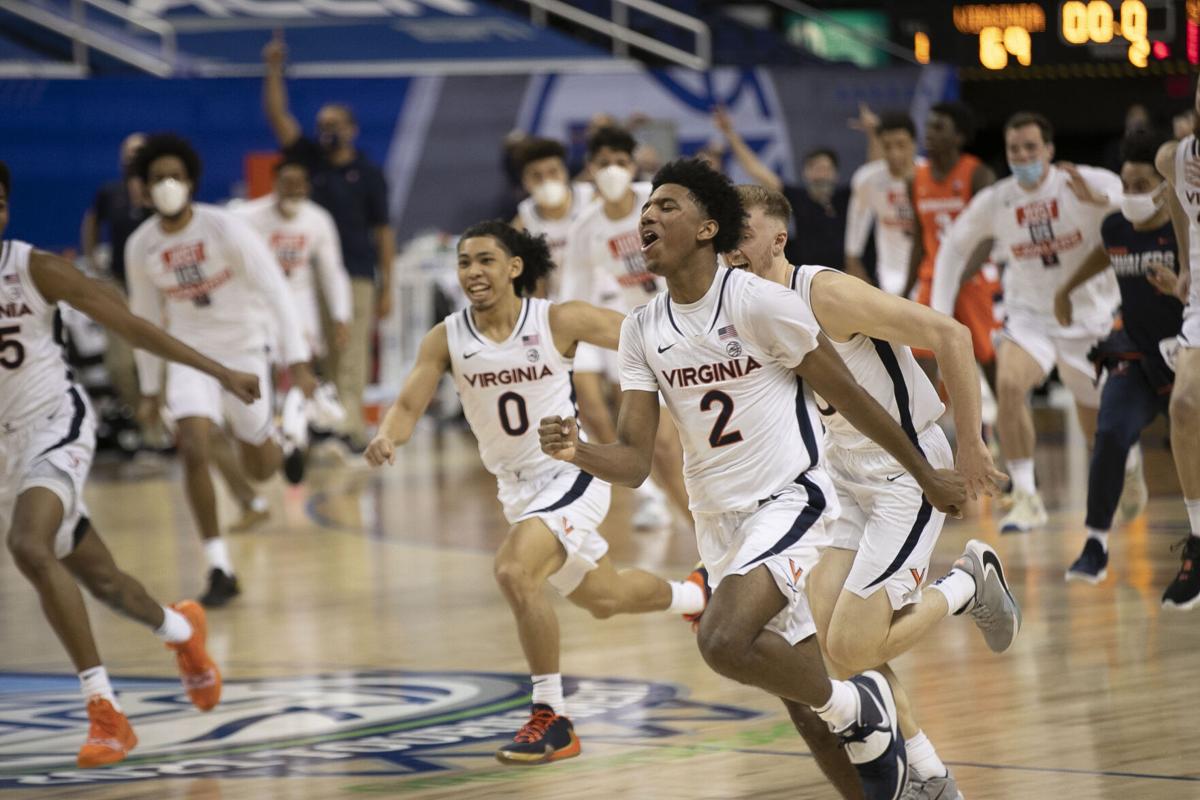 Virginia’s Reece Beekman (right) sprints across the court after making the game-winning 3-point shot at the buzzer to give the Cavaliers a 72-69 victory over Syracuse on Thursday in the ACC Tournament. 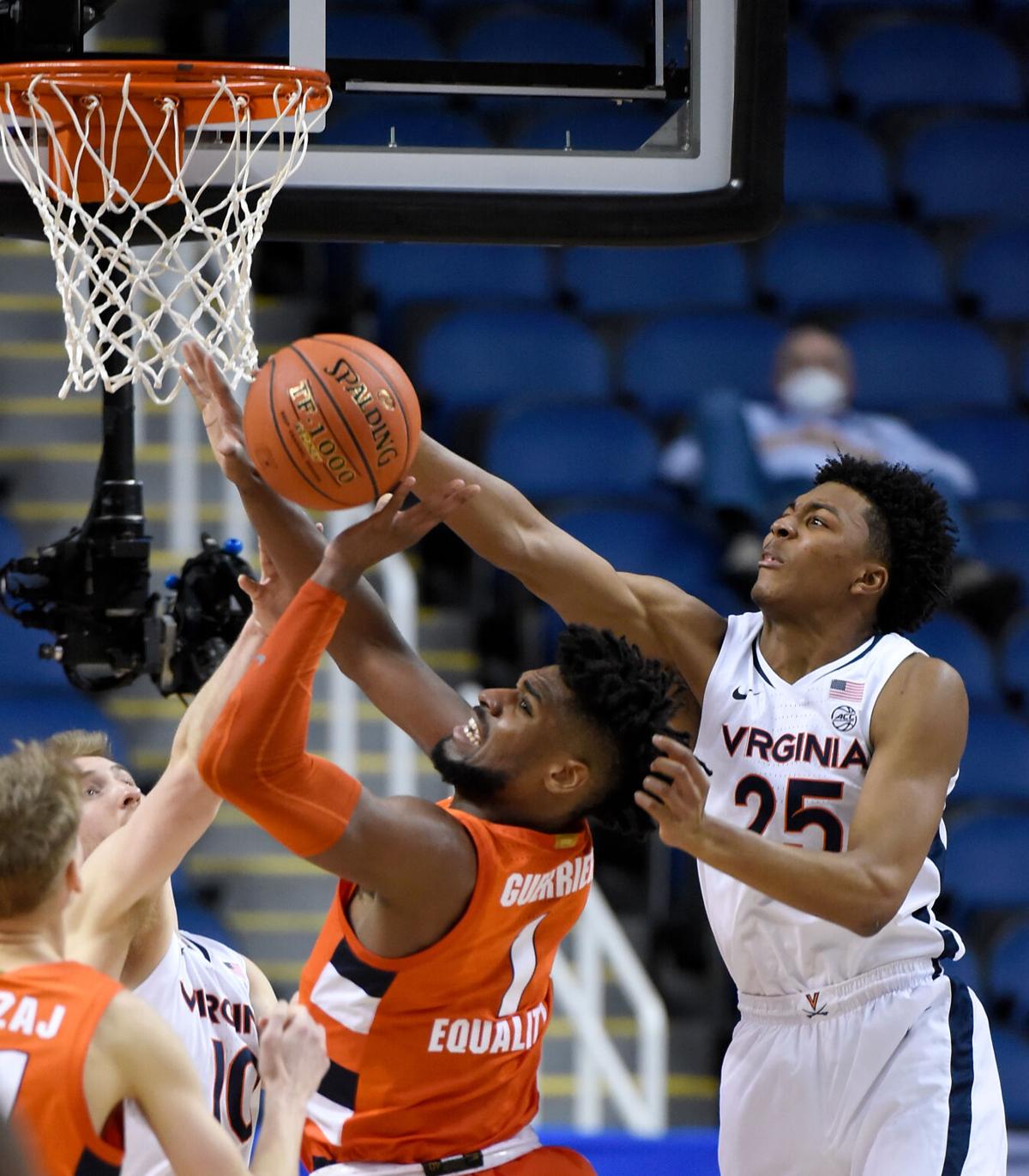 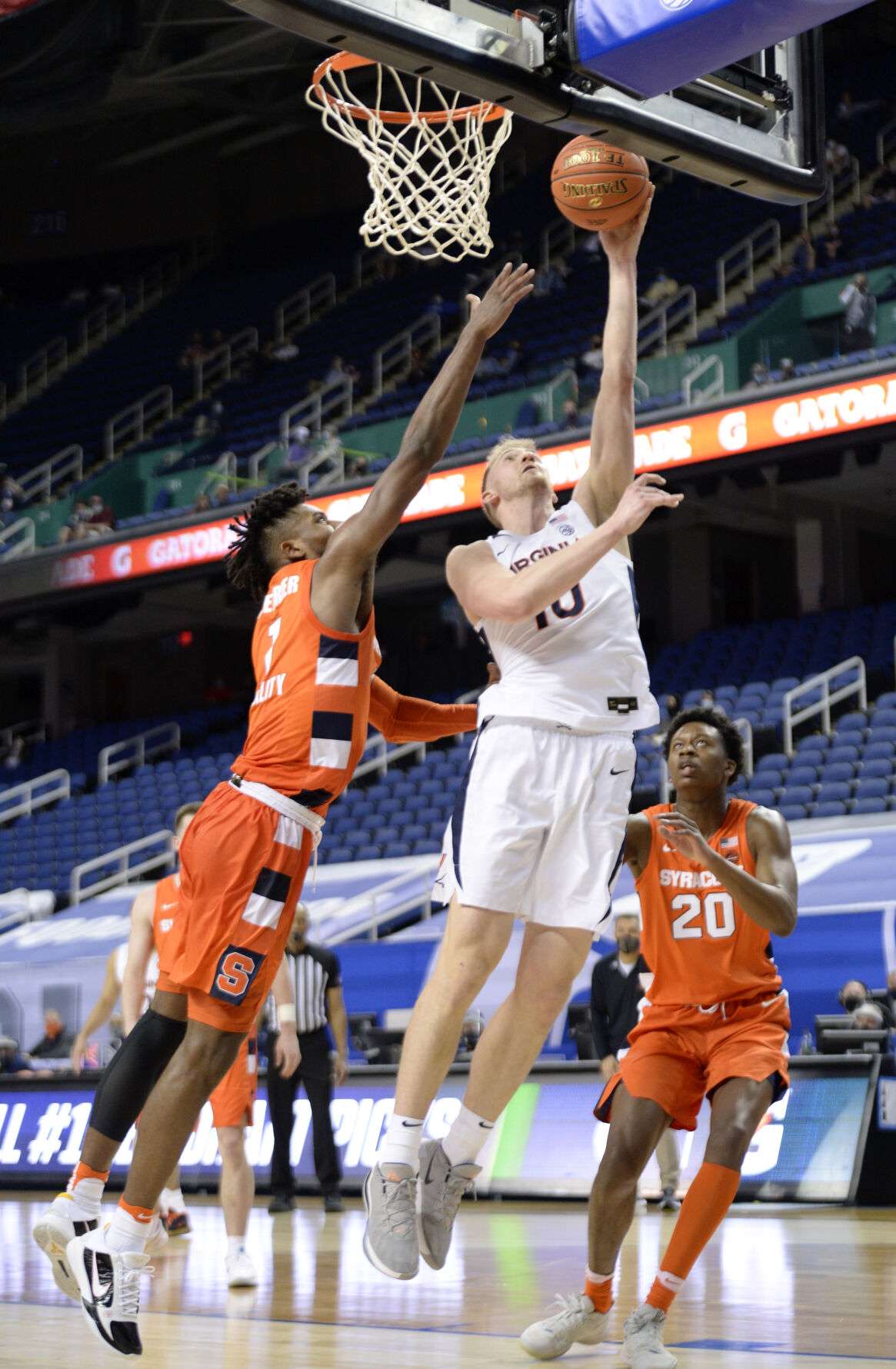 Virginia’s Sam Hauser (center) shoots over Syracuse’s Quincy Guerrier (left) in an ACC quarterfinal on March 11. UVa won 72-69 but hasn’t played since because of a COVID-19 positive test within the program.

GREENSBORO, N.C. — Reece Beekman and his teammates watched Trey Wertz send Notre Dame to an ACC Tournament win with a buzzer-beater on Tuesday and wondered what it would be like to hit a shot like that.

Thursday afternoon, he got to experience it.

“We were thinking, ‘What if you were in that situation?’” said Beekman. “It was just crazy that it happened in the same tournament.”

Beekman’s 3-pointer from the wing as time expired lifted top-seeded Virginia to a 72-69 win over eighth-seeded Syracuse and into the ACC semifinals on Friday against Georgia Tech.

Senior forward Sam Hauser carried the offense and junior guard Trey Murphy III was big down the stretch, but it was the freshman from Baton Rouge, Louisiana, who hit the shot that gets a place in UVa basketball lore.

A year since his older brother, a senior football player at Washington State, died due to an accidental drug overdose, and with his mother in the stands at the Greensboro Coliseum, Beekman sank the biggest shot of his athletic career.

“She tries to be at every game I have,” said Beekman, who scored just the one basket Thursday. “I know she works a lot, so just her being here meant a lot for me because she’s supported me through and through since the beginning.”

Hauser scored 21 points despite struggling from beyond the 3-point arc, and Murphy hit a trio of late second-half 3-pointers and a pair of free throws with 1:16 to go as UVa survived another offensive onslaught from Buddy Boeheim.

The Syracuse guard scored 31 points, the last two on game-tying free throws with 29 seconds to play.

“That’s what March is,” Hauser said. “We’re playing for a lot. Reece made a huge shot at the end.”

Murphy scored 11 of his 15 points in the second half, including knocking down back-to-back 3-pointers with 2:53 to go to help Virginia (18-6) pull out a thrilling win in its 2021 tournament debut.

UVa drilled Syracuse 81-58 on Jan. 25. In that game, the Cavaliers hit 14 3-pointers, including seven from Hauser. They held Boeheim to just nine points.

Thursday was a different story.

UVa’s first three possessions produced a long late 3-point attempt missed by Murphy, a badly missed 3 from the wing by Beekman and a tightly contested 3 by Hauser that rimmed out. Syracuse got out to a 7-0 lead early on.

The Cavaliers went 3 for 16 from 3-point range in the first half, including a 1-for-6 showing from Hauser, the Marquette transfer.

“I thought they may be more mindful of keying to our shooters, but the shots were there,” said Virginia coach Tony Bennett. “And just we didn’t shoot at the same efficiency.”

A day after lighting up North Carolina State for 27 points in the Orange’s second-round win, Boeheim struck for 10 in the first 8:20 of play against the Cavaliers, helping Syracuse to a 20-14 lead.

Murphy and Hauser hit 3-pointers to open the second half, tying the game, then giving the Cavaliers their first lead at 42-39, prompting Syracuse coach Jim Boeheim to call timeout. The rest of the half remained tight.

Murphy’s surge appeared to give UVa some breathing room, but in the end, it took Beekman’s heroics to seal the deal.

“So happy for Reece,” Bennett said. “He’s been through so much, and just overjoyed for him, of course the team. But there’s some special meaning for him and his mom being here.”

The star safety has helped VMI rise from a winless team to a potential playoff team.

It will be the teams' first meeting since 2009.

SoCon football title race down to VMI and Mercer

Mercer beat ETSU to stay alive in the race.

Virginia’s Reece Beekman (right) sprints across the court after making the game-winning 3-point shot at the buzzer to give the Cavaliers a 72-69 victory over Syracuse on Thursday in the ACC Tournament.

Virginia’s Sam Hauser (center) shoots over Syracuse’s Quincy Guerrier (left) in an ACC quarterfinal on March 11. UVa won 72-69 but hasn’t played since because of a COVID-19 positive test within the program.