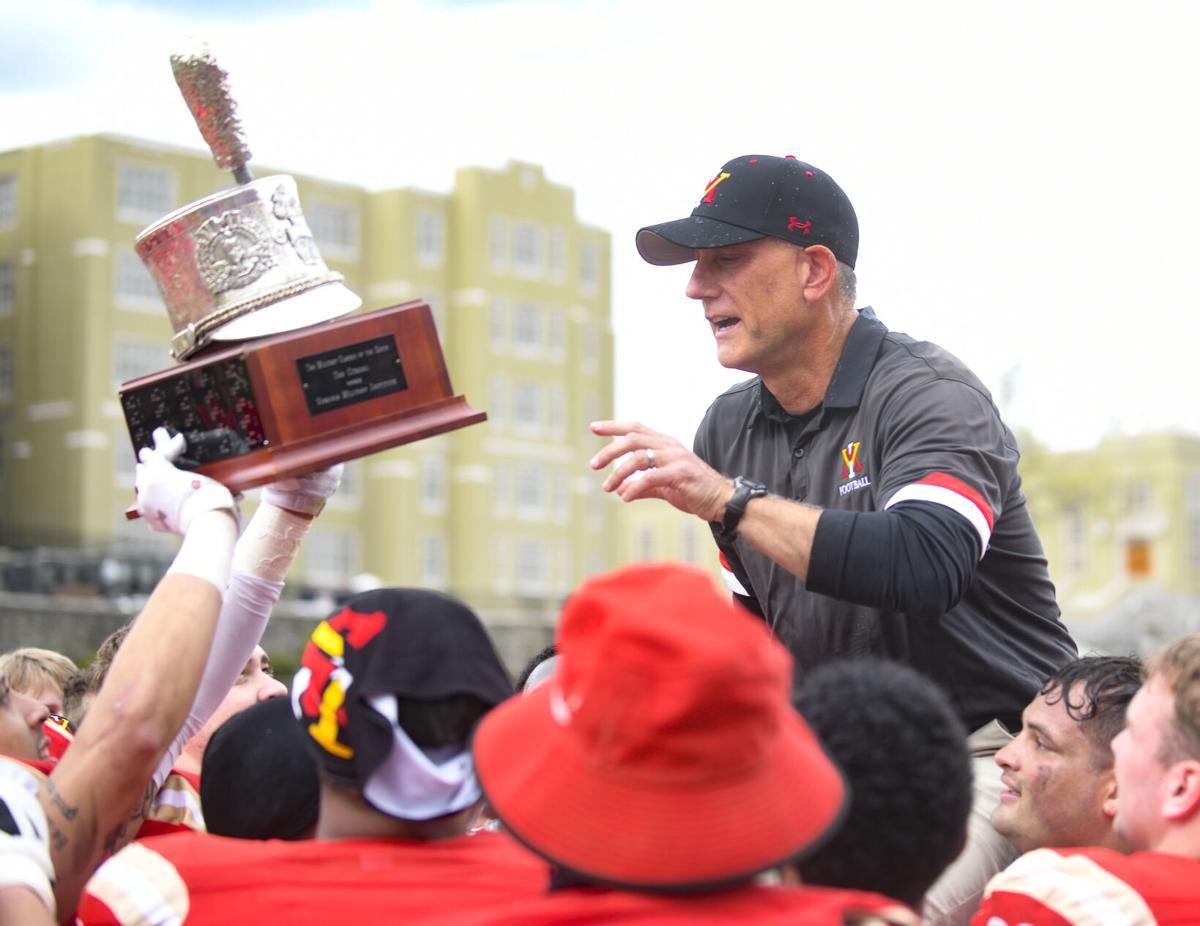 VMI football coach Scott Wachenheim is lifted up by his team after the Keydets beat The Citadel 31-17 to win the Southern Conference title. One of the players is holding up the Silver Shako Trophy, which annually goes to the winner of the VMI-Citadel game. 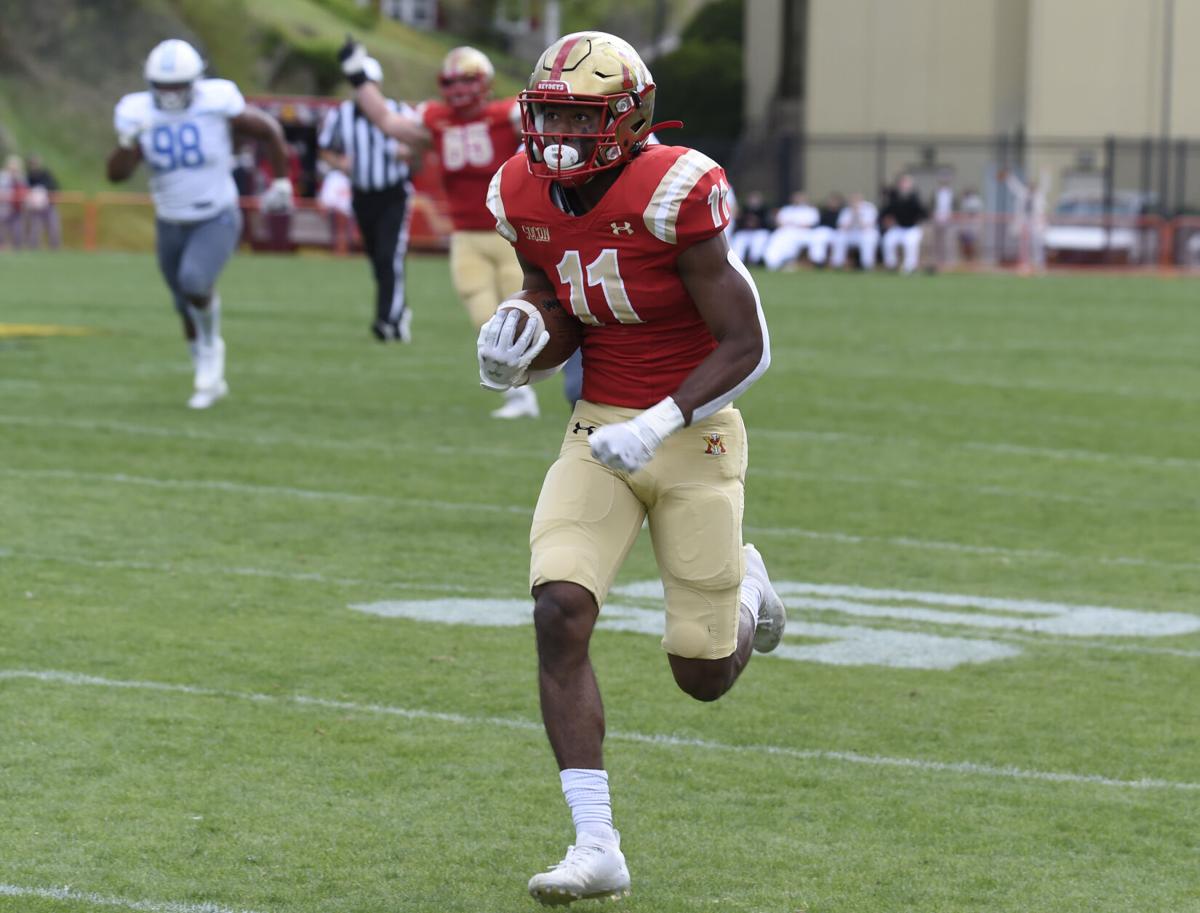 VMI receiver Michael Jackson heads down the sideline for a 50-yard touchdown reception with 1:52 to go in the team’s win over The Citadel. 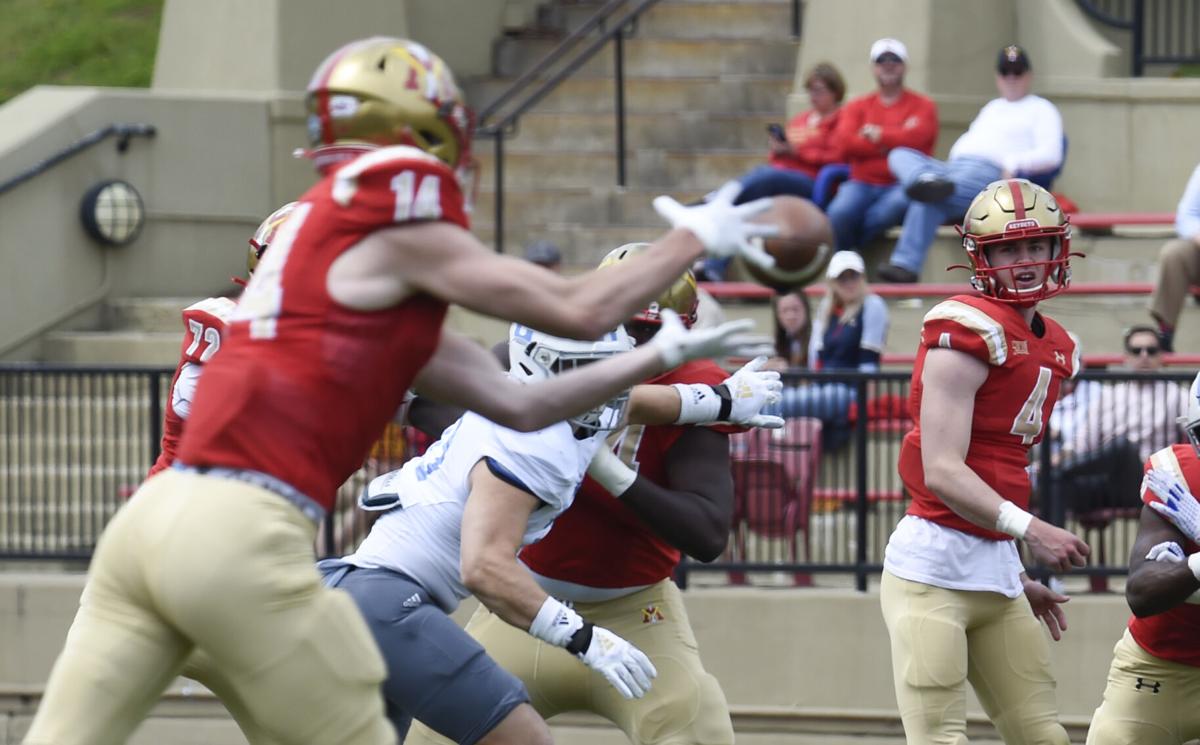 VMI quarterback Seth Morgan (right) throws a pass to receiver Jakob Herres (14) for a first down. Morgan threw for 328 yards. Herres had 11 catches.

LEXINGTON — History was made at Foster Stadium on Saturday.

The 15th-ranked VMI football team beat archrival The Citadel 31-17 in its regular-season finale to claim the first FCS playoff bid in its history.

The Keydets (6-1, 6-1), who were 0-11 in 2017, captured their first Southern Conference title since they finished in a first-place tie with Chattanooga in 1977. They won their first outright SoCon title since 1974.

“It’s a clean version of the Drake song — ‘We started from the bottom. Now we’re here,’” coach Scott Wachenheim said. “We definitely did start from the bottom and now we’re at the top of the SoCon. Couldn’t be more proud of the football team.”

VMI which tied for sixth out of nine teams in the SoCon coaches’ preseason poll, claimed the league’s automatic FCS playoff bid.

“This has been an amazing journey,” quarterback Seth Morgan said.

The Keydets had already clinched their first winning season since 1981, which was the last year the Keydets and the SoCon played major-college football.

The players rushed onto the field and hugged each other at game’s end.

“It was just a lot of happiness,” junior receiver Jakob Herres said. “You just saw smiles on everybody’s faces.

“You start thinking about it before the season, what it would be like, but to actually experience it now, it’s just a whole ‘nother level of happiness and excitement.”

Players posed for photos with each other and were congratulated by family members. A few players did back flips. They were in no hurry to head to the locker room.

“You want to soak a moment like that in,” junior receiver Michael Jackson said.

Linebacker Connor Riddle, the only fifth-year senior on the team, was part of the 0-11 squad in 2017. If he had been told back then that VMI would be the SoCon champ by the time he ended his career, would he have believed it?

After Wachenheim did a postgame interview on the field, VMI players doused him with a bucket of water.

The 0-11 campaign was Wachenheim’s third season at the helm of the Keydets.

Now his players are champions.

Morgan, a redshirt freshman, inherited a 4-0 team and has gone 2-1 as the starting QB.

“I’d be lying if I said I didn’t feel any pressure. It’s hard to take a 4-0 team, to be handed that and expect to run with it,” Morgan said.

Morgan shined Saturday, completing 25 of 34 passes for 328 yards and three touchdowns. He also ran for a TD.

“That’s kind of when the belief started to come, even though we were 1-10,” Herres said. “Now we’re here and we’re conference champions and it couldn’t feel better.”

The turnaround began in 2019, when the Keydets went 5-7 overall and 4-4 in the SoCon. They won at East Tennessee State in September 2019 to snap a 22-game SoCon losing streak.

VMI did not play football last fall because of the coronavirus pandemic. The season was postponed in August.

Riddle needed just one more semester to graduate, so he dropped out of VMI for the fall 2020 semester and returned this semester so he could play this spring. Now he is a champion.

“It’s amazing. It’s the reason I came back. I knew this team was special,” said Riddle, who had 20 tackles Saturday.

VMI beat The Citadel (2-10, 2-6) in “The Military Classic of the South” for the second straight season, keeping the Silver Shako Trophy in Lexington. It was VMI’s first home win over the Bulldogs since 2000.

The Keydets jumped up and down after the team was presented the Silver Shako Trophy. It was extra special for them to get their championship-clinching win against their biggest rivals.

“They don’t like us. We don’t like them,” Morgan said. “Some poetic justice there, winning our first championship in awhile versus them.”

VMI actually clinched the title with 3:12 to go in Saturday’s game, because that’s when Mercer’s 44-20 loss at Samford ended. VMI would have earned the title and bid with either a win over The Citadel or with a Mercer (5-6, 5-3) loss at Samford; both things happened.

The FCS playoff pairings will be announced at 11:30 a.m. Sunday on ESPNU.

VMI running back Korey Bridy, who had missed the previous two games with a leg injury, caught a screen pass and motored to the end zone for a 17-yard TD catch to give the Keydets a 7-0 lead in the first quarter. VMI led the rest of the way.

Morgan teamed with Herres on a 3-yard TD pass to extend the lead to 14-0 later in the quarter.

Bridy fumbled the ball away in the third quarter. Two plays later, Bulldogs QB Jaylan Adams scored on a 22-yard run to cut the lead to 21-17.

Lord Botetourt graduate Jerry Rice kicked a 38-yard field goal to extend the lead to 24-17 with 6:41 left in the third.

Jackson hauled in a short pass from Morgan and took off for the end zone for a 50-yard TD catch to extend the lead to 31-17 with 1:52 to go.

Stone Snyder had 21 tackles and two sacks for VMI.

Photos: From VMI's gridiron victory over The Citadel

Did Mike McCarthy buy himself some time?

Did Mike McCarthy buy himself some time?

"I know our fan base is excited about this game," WVU coach Neal Brown said

McFarling: No excuses, letdowns or traps at Hokies' disposal

VMI football coach Scott Wachenheim is lifted up by his team after the Keydets beat The Citadel 31-17 to win the Southern Conference title. One of the players is holding up the Silver Shako Trophy, which annually goes to the winner of the VMI-Citadel game.

VMI receiver Michael Jackson heads down the sideline for a 50-yard touchdown reception with 1:52 to go in the team’s win over The Citadel.

VMI quarterback Seth Morgan (right) throws a pass to receiver Jakob Herres (14) for a first down. Morgan threw for 328 yards. Herres had 11 catches.