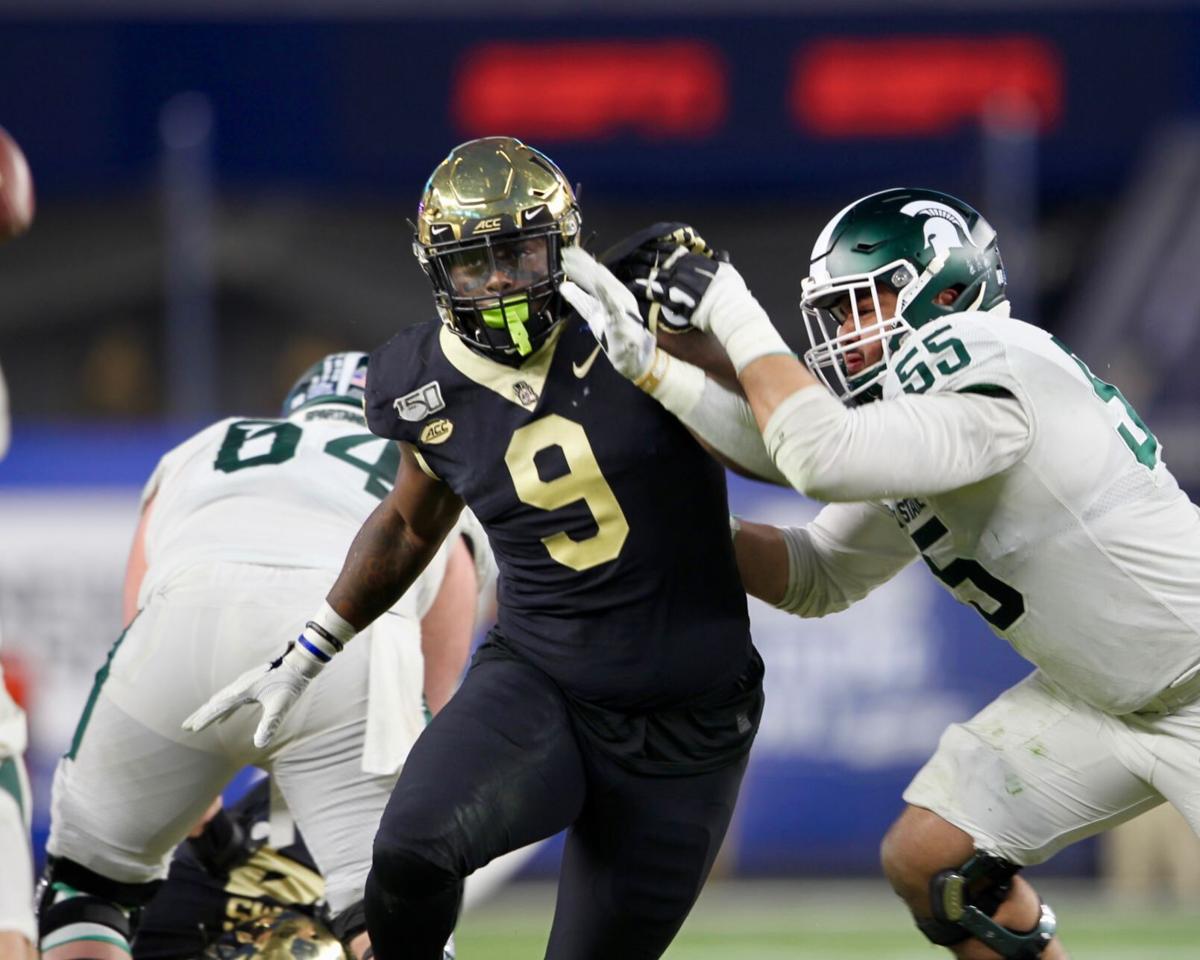 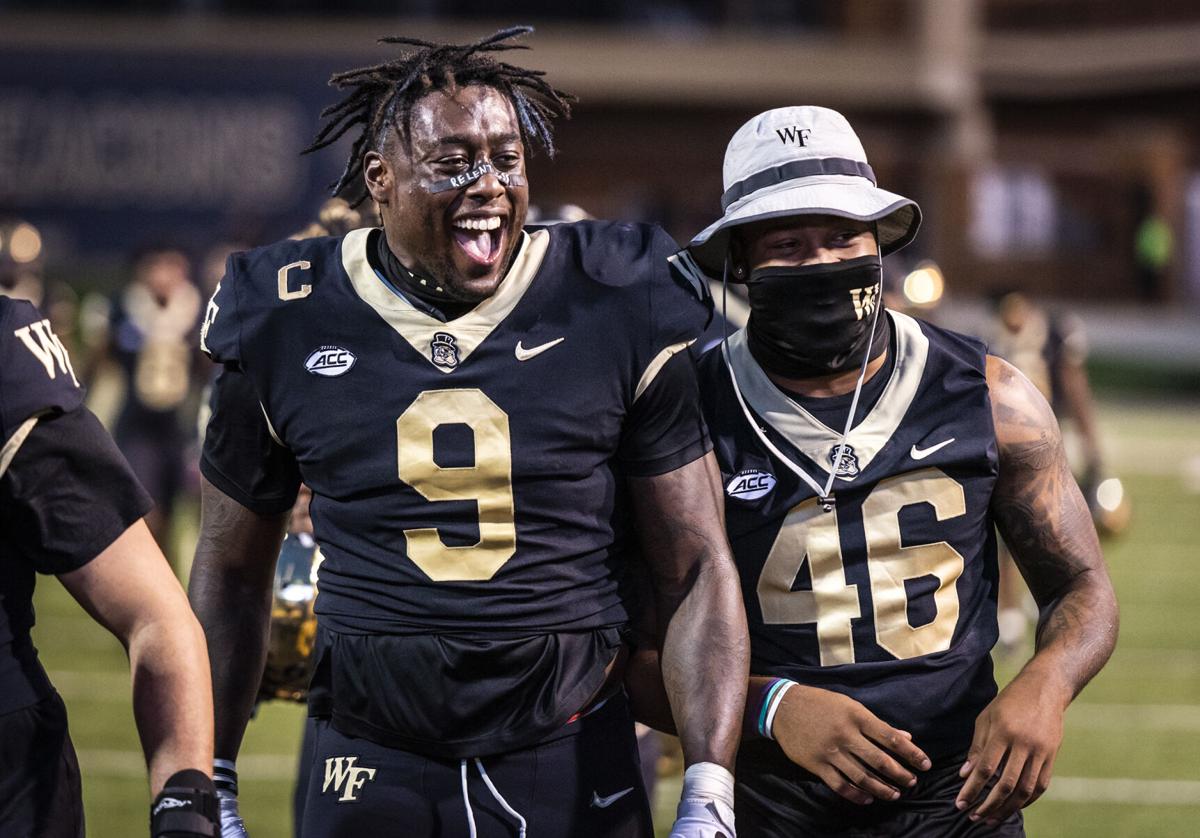 Wake Forest senior defensive and and Northside graduate Carlos Basham Jr. (left), shown with teammate D.J. Taylor after a win over Virginia Tech in October, has declared for the NFL Draft. 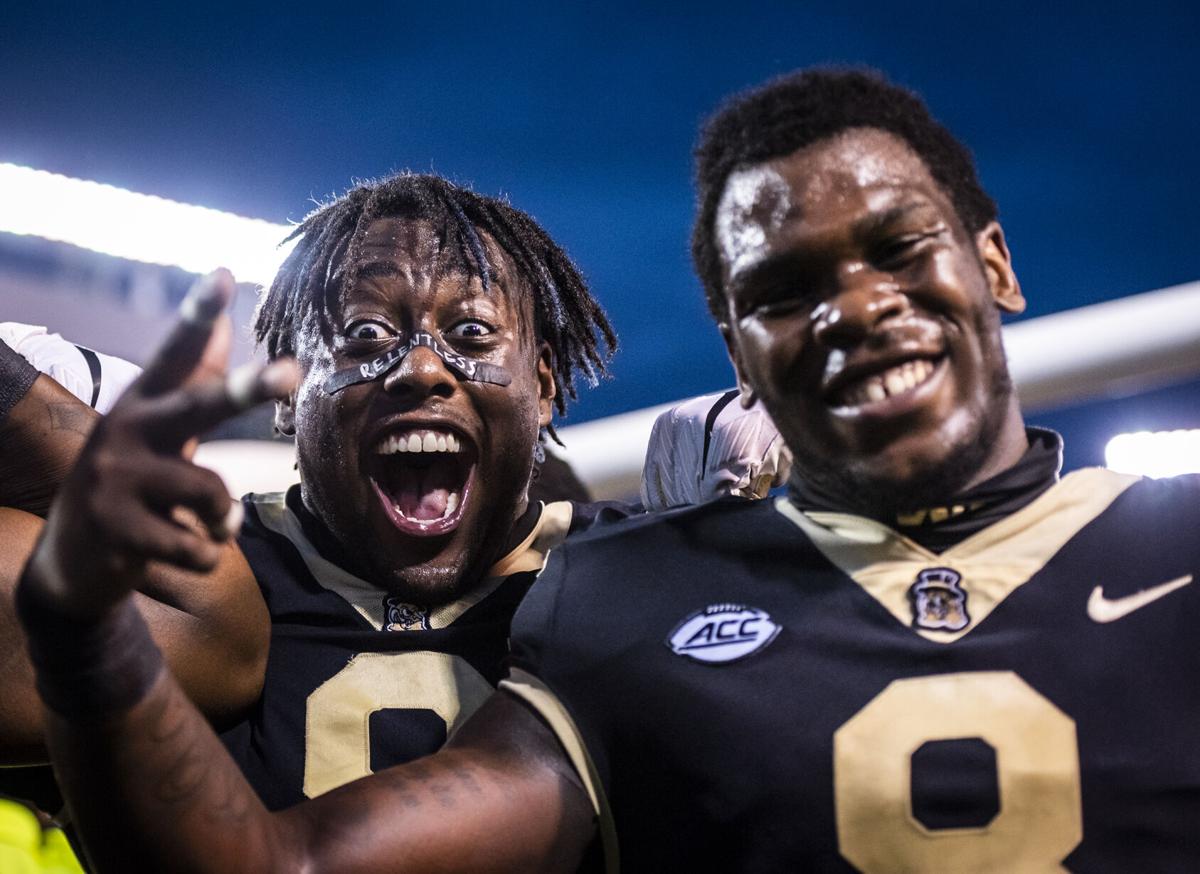 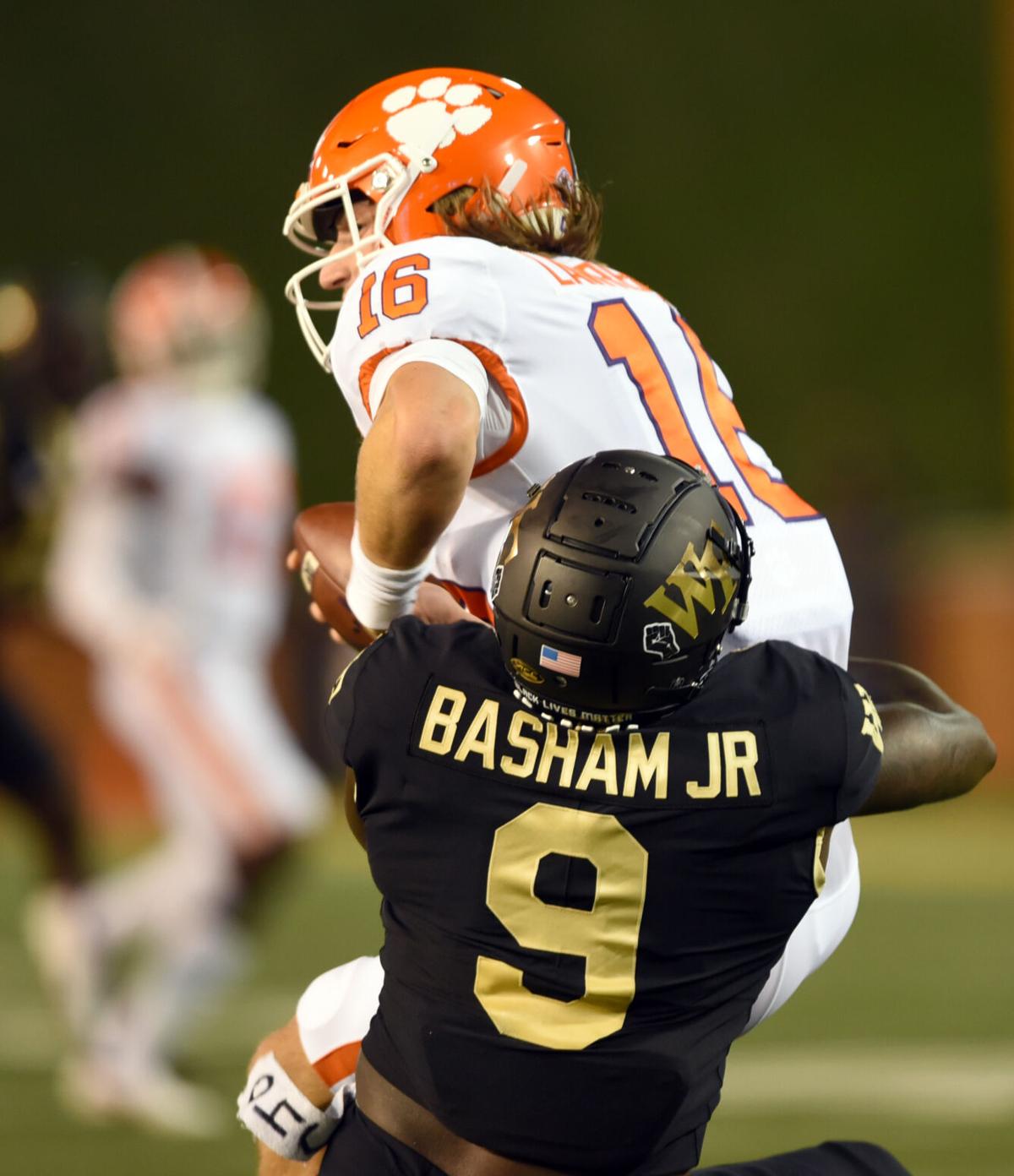 The fifth-year senior defensive end, who tested positive for COVID-19 last month, has decided to skip the Demon Deacons’ expected bowl game and turn his attention to the NFL Draft.

“This entire journey has been a blessing, and as I continue the recovery process from COVID-19, I have decided to declare for the 2021 NFL Draft,” Basham tweeted Friday afternoon. “The preparation starts now.”

Basham tweeted his announcement a few hours after the ACC announced the cancellation of Wake Forest’s regular-season finale Saturday against visiting Florida State. FSU did not have enough offensive linemen available in the wake of a positive COVID-19 test and subsequent quarantining and contact tracing, according to the conference.

Basham said that at the time of the cancellation, he had not yet decided if he would play in Saturday’s game. He said he is not yet 100% because of his recovery from COVID-19.

If he had played Saturday, it would have been only briefly, according to his mother, Crystal Basham.

“No use in him going out there and getting bad film because he’s not 100%,” she said Friday in a phone interview.

She said her son had already decided before the cancellation that he would not play in a bowl game.

“The COVID, it really got him,” she said. “He didn’t think that he would be ready for a bowl game.”

Basham tested positive for COVID-19 on Nov. 24, his mother said.

“His endurance and stuff is slowly coming back,” Crystal Basham said. “He had quite a few of the symptoms. He had the chills, the headaches, the congestion, the loss of taste and smell, which caused him to lose his appetite. So he lost quite much weight in a short time. But he’s getting it back up there and trying to get back on track.”

Because of COVID-19 issues in the Wake Forest program, the Demon Deacons did not play their scheduled games on Nov. 21, Nov. 28 or Dec. 5.

The team returned to action last Saturday against Louisville, but Basham watched that game from the sideline. He tweeted after the game that his recovery from COVID-19 was the reason he did not play.

Crystal Basham said her son did not pass his cardiac tests until four days before the Louisville game.

“By that time, he couldn’t do anything. Just weak and tired, getting tired real quickly,” Crystal Basham said.

Basham completed work on his bachelor’s degree this month, said his mother.

Saturday’s regular-season finale would have been Wake Forest’s Senior Day. Basham would have been recognized on the field during a pregame ceremony. His parents had planned to attend the game. Instead, the seniors were to be recognized in a virtual ceremony Friday night.

Basham had 57 tackles, 11 sacks, 18 tackles for loss and three forced fumbles last year, when he made the All-ACC first team.

After mulling over whether to enter the 2020 NFL Draft or to return to Wake for his senior season, Basham decided last December that he needed one more season in college to accomplish his goal of being a first-round pick.

Basham had 28 tackles, five sacks, 5 1/2 tackles for loss and one forced fumble in seven games this year. His streak of 23 straight games with a tackle for loss ended in a Halloween win at Syracuse.

He was invited last month to the Senior Bowl — the top showcase game for NFL prospects.

ESPN’s Todd McShay rated Basham this week the No. 24 prospect in the 2021 draft.

UVa's Paige Madden was 2nd in the 400 freestyle final.

His helmet came off when he swung and missed.

Carlik Jones and Mac McClung are also on the list.

Wake Forest senior defensive and and Northside graduate Carlos Basham Jr. (left), shown with teammate D.J. Taylor after a win over Virginia Tech in October, has declared for the NFL Draft.