James Madison defensive lineman and Roanoke Catholic graduate James Carpenter (center) celebrates with teammates after making an interception against VMI during the second half of a first-round FCS playoff win in Harrisonburg in April. 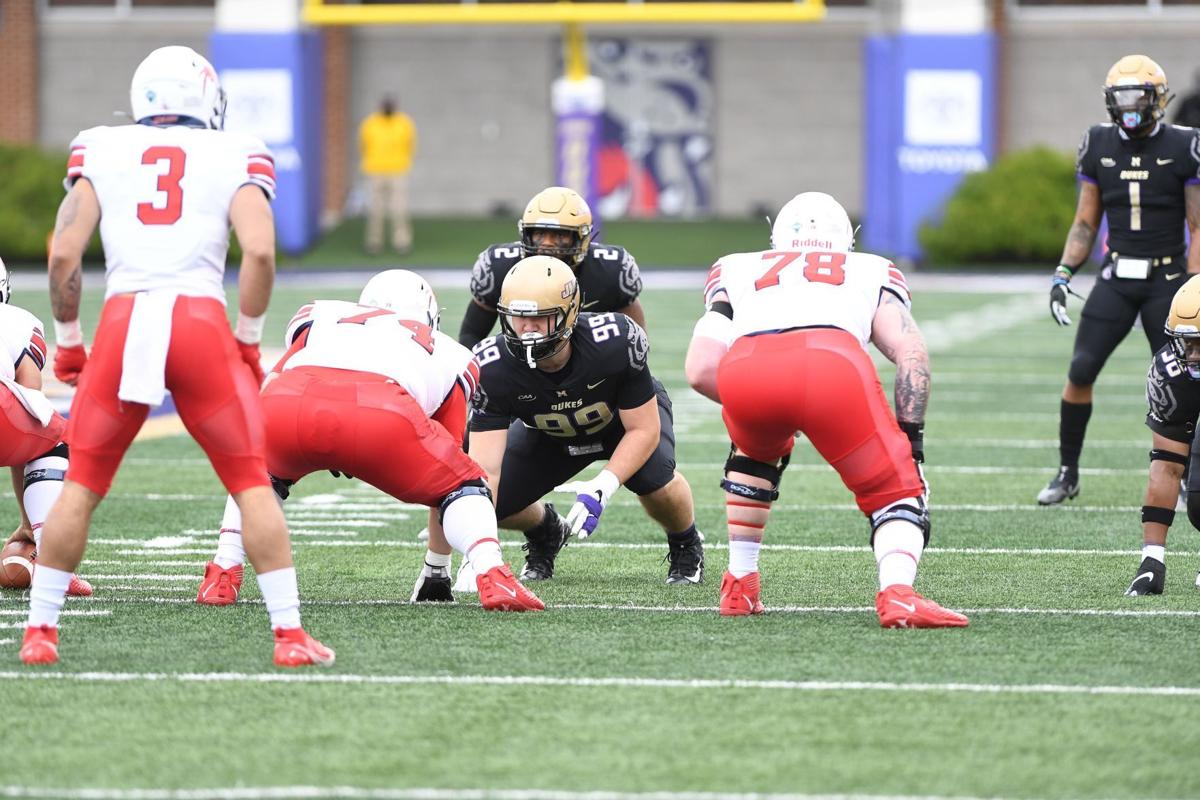 Roanoke Catholic grad James Carpenter (center), who started off as a walk-on, has carved out a place as a starter on JMU’s defensive line.

The play unfolded in textbook fashion, and at a supremely opportune time for the James Madison football team.

In the Dukes’ first-round FCS playoff game against VMI in April, the Keydets pulled back to within two scores with an early fourth-quarter touchdown pass from quarterback Seth Morgan to receiver Jakob Herres.

And, following a JMU punt, VMI found itself driving again, after Morgan hit receiver Michael Jackson for a 20-yard gain close to midfield to open its drive.

But, on the next play, Dukes defensive tackle and Roanoke Catholic graduate James Carpenter muscled his way through the VMI lineman in front of him. With Carpenter barreling down, Morgan was forced to make a decision.

Morgan tried to dump off a screen pass to running back Korey Bridy, but Carpenter — then a redshirt freshman — stuck his right hand out, tipped the ball straight up in the air, then secured it himself with a basket catch before he was brought down.

Defensive end Abi Nwabuoku-Okonji dragged Carpenter off the ground, embracing him in celebration as the Dukes ran off the field.The interception helped JMU secure a victory in a run to the FCS semifinals, and it was the highlight of a season in which Carpenter established himself as a starter on the Dukes’ defensive line, annually one of the program’s strongest position groups.

“Probably the highlight of my career, so far,” Carpenter said. “So it was definitely something I’ll never forget.”Carpenter was a player who emerged during JMU’s “fall ball” practice period last year, coach Curt Cignetti said last November. With the Dukes down multiple D-line pieces due to injury and transfer, the former walk-on stepped up at the right time.

And Carpenter is carving out his place to stay heading into the upcoming fall season, with the line much deeper than it was just a few months ago.

“We got eight, 10 guys deep,” Carpenter said. “So it’s pretty crazy and unusual. But it can only help us in the long run.”

Among that group, Carpenter has taken first-team reps in fall camp, ahead of JMU’s Sept. 4 opener against Morehead State.

The Roanoke native arrived at JMU in 2019 and played in just one early season game before sitting out the rest of that season and taking a redshirt.

“Obviously true freshman year is always tough. You don’t really expect much,” Carpenter said. “Mostly scout team guy, so you just try and learn from it. Just kind of take it on the chin and just learn everything you can from that year.”

That time helped him last fall, which became a de facto spring practice period after the 2020 fall season was pushed to the spring of this year due to the COVID-19 pandemic.

Also, star defensive tackle Mike Greene bumped to the outside to play defensive end. It meant opportunity inside for players like Carpenter.

“I thought I’d take advantage of it as best I can,” Carpenter said.

Carpenter earned the coaching staff’s trust. After he registered three tackles, including a stuff of Morehead State running back Carter Rivenburg in the backfield for a loss of 4 yards in the Dukes’ opener, the 6-foot-2, 274-pound Carpenter started the next seven contests in JMU’s eight-game spring season.

He felt that each day, and each game, he got better. He finished with 21 tackles, including five for a loss with two sacks. In addition to the interception against VMI, Carpenter had a pass breakup against Richmond in April.

“As a starter you got a lot of weight on your shoulders. So being able to handle that weight and just, each day, just have the same mindset. It’s really something I had to improve on,” Carpenter said. “And it really, as the season went on, I feel like I got better and better.”

Carpenter was second among JMU defensive linemen in total tackles and tackles for loss, behind just Greene.

He was named the Virginia Sports Information Directors’ state Division I defensive rookie of the year.

“It was kind of one of those feelings, hard work pays off. And I really didn’t expect it,” Carpenter said of the honor. “But I was really excited, super pumped about it. ... Just got to build from it.”

That’s what Carpenter has been working on in the months since. In what’s been a shortened offseason, he took just a few days off after the Dukes’ season ended in May before jumping back into weightlifting and conditioning.

Carpenter has felt good so far in fall camp this month. Greene has moved back inside from end to tackle. Also, Ukwu and Green and back, and JMU added Towson transfer Bryce Carter, Ohio State transfer Zaid Hamdan and Army transfer Jordan Funk to the D-line group, creating a much more crowded house.

There’s a lot competition at each spot in camp, Carpenter said.

“We really push each other,” Carpenter said. “And I think it’s going to be a great year for us.”

Carpenter worked himself from walk-on to starter status in the past two years. And, back for Round 3, the fall will be about building on his breakout spring.

“I feel like, if I do my job, and everyone else does their job,” Carpenter said, “my individual goals, I guess, that will come for itself.”

Mike Greene on JMU's defensive line and the upcoming season

James Madison defensive lineman and Roanoke Catholic graduate James Carpenter (center) celebrates with teammates after making an interception against VMI during the second half of a first-round FCS playoff win in Harrisonburg in April.

Roanoke Catholic grad James Carpenter (center), who started off as a walk-on, has carved out a place as a starter on JMU’s defensive line. 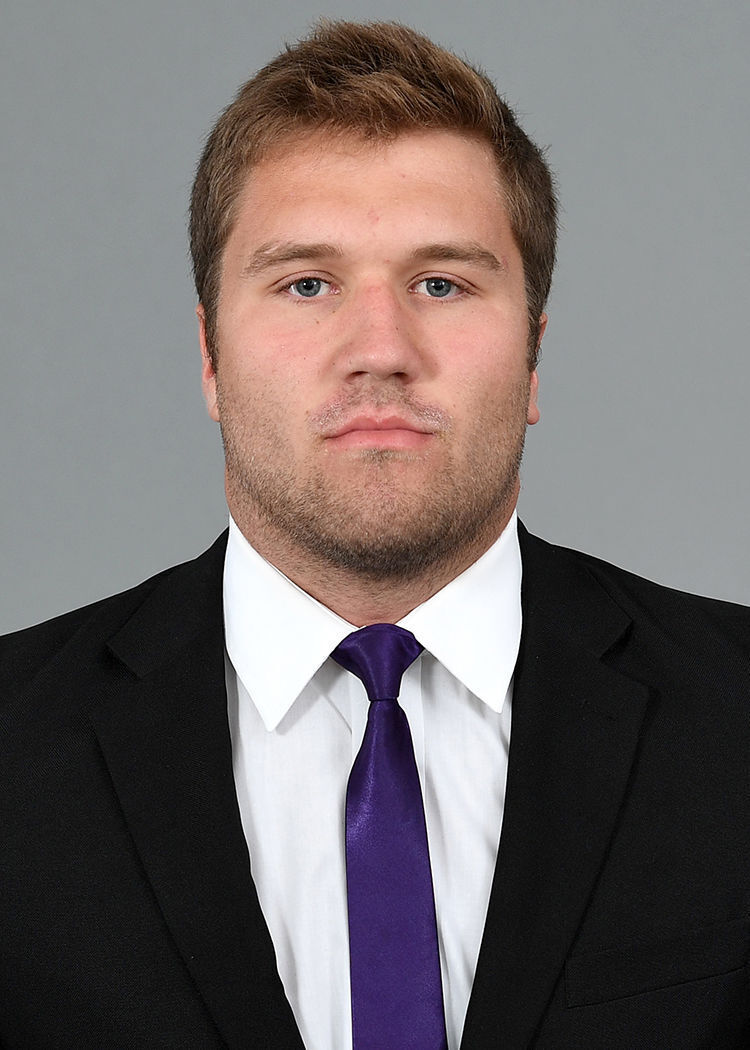