Virginia quarterback Brennan Armstrong runs the ball against North Carolina during the first half Saturday in Chapel Hill, N.C. 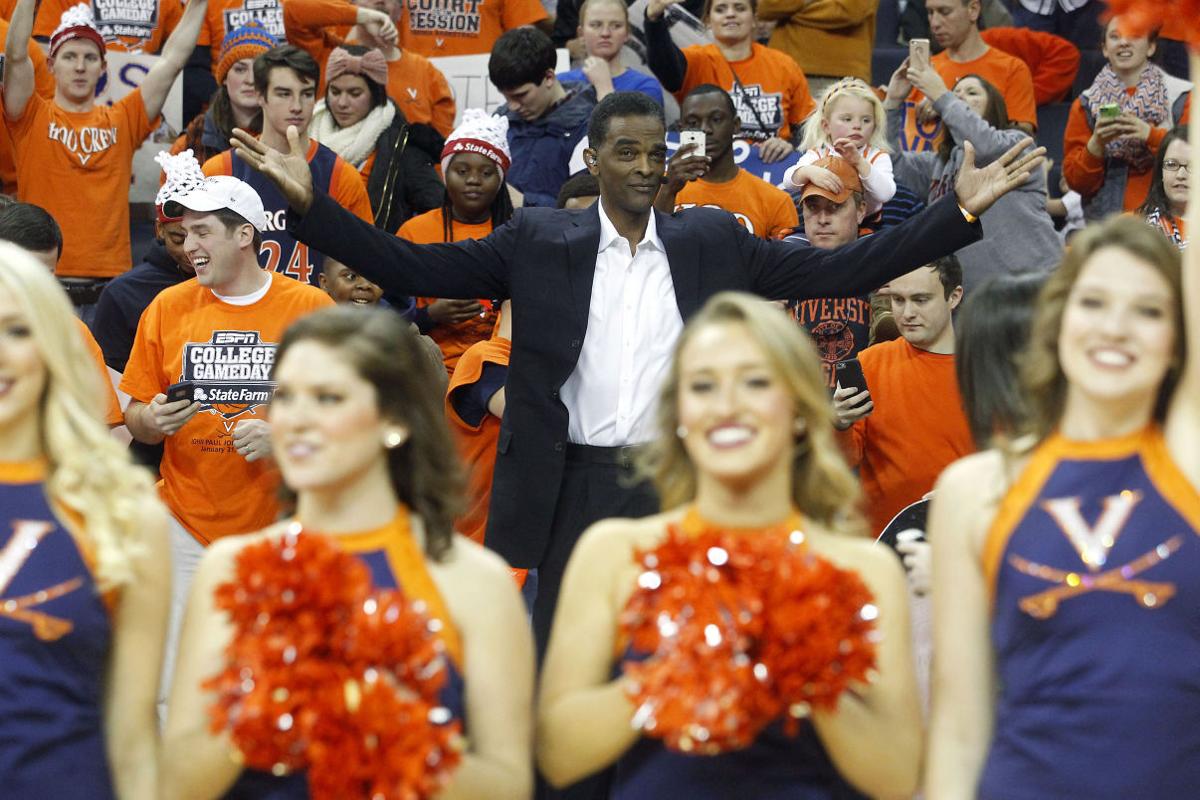 Ralph Sampson pumps up the crowd during ESPN's "College GameDay" in Charlottesville in 2015. 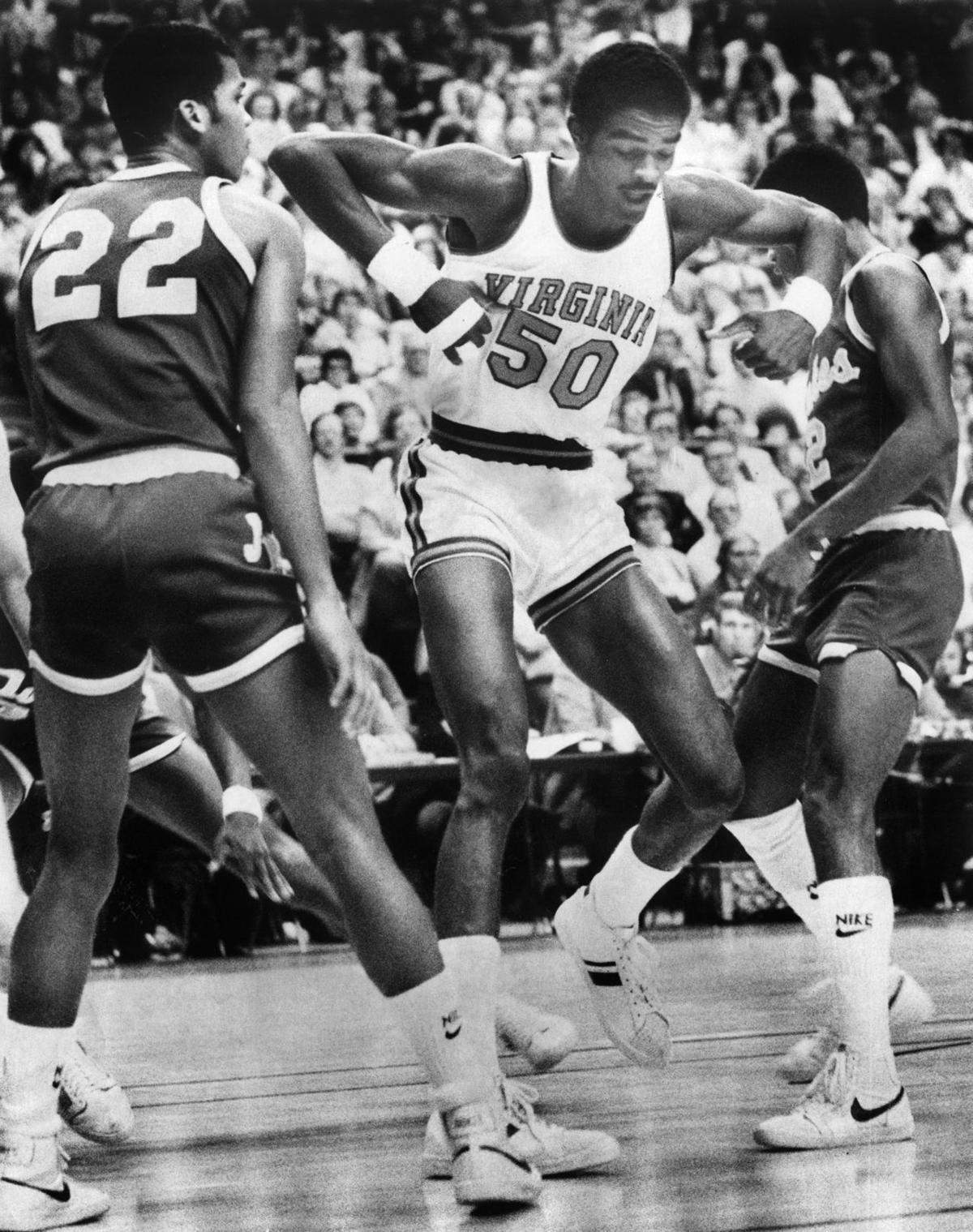 In December 1981, University of Virginia basketball center Ralph Sampson fended off two James Madison University opponents during a game at the Richmond Coliseum.

CHARLOTTESVILLE — Virginia quarterback Brennan Armstrong just turned in a three-game showing unrivaled in the program’s history. Armstrong has thrown for 1,298 yards and 11 touchdowns, a run highlighted by his school-record 554 passing yards in Saturday night’s loss at North Carolina.

Armstrong has become the first Virginia quarterback to pass for 300-plus yards in three straight games and the first to throw for 400-plus in consecutive outings.

But how does the Ohio native’s run compare to some of the best three-game stretches in the history of UVa athletics?

Armstrong’s numbers at quarterback are unrivaled at Virginia, but Thomas Jones had his own three-game spurt from the running back position. He rushed for 598 yards and four touchdowns during games against Florida State, Buffalo and Georgia Tech in 1999.

In the last two of those games, Jones ran for over 200 yards, going for a career-high 221 against Buffalo and 213 against the Yellow Jackets. After falling, 35-10 to FSU, the Cavaliers beat Buffalo and Georgia Tech convincingly.

UVa basketball’s history is chock full of impressive stretches. Not surprisingly, one of the best belongs to Cavaliers Hall of Famer Ralph Sampson. The big man posted three straight double-doubles from Jan. 26-Feb. 3 in 1983. He scored 16 points and grabbed 16 rebounds against Louisville, then went off for 35 and 12 against Louisville and 30 and 12 against Wake Forest.

That gave Sampson a three-game total of 81 points and 40 rebounds.

Virginia’s all-time leading scorer, Bryant Stith, had nine 30-point games during his college career, including a career-high 37 in an overtime win at Wake Forest on Jan. 28, 1990. The next week, though, Stith went on an even more impressive three-game surge, scoring 35 points in a win over Marquette and 23 in an upset of No. 4 Duke in Charlottesville. He posted double-doubles in both those victories, grabbing 12 and 15 rebound in the contests. Stith followed that up with 22 in a road loss at Clemson.

Still, both of those runs take a backseat to Mike Scott, who put up 85 points and 31 rebounds in three straight games against Florida State, Maryland and North Carolina State in March 2012. UVa went 1-2 in those games, with each decided by three points.

Get in the hole

That same year, Virginia golfer Ben Kohles turned in one of that program’s greatest stretches. He won The Palmetto Intercollegiate on March 6, finished second the following weekend at the General Hackler Collegiate, and then wrapped it up by winning the Schenkel Invitational on March 18, carding a school tournament record 18-under 198.

Dawn of the Staley era

Dawn Staley‘s career with UVa women’s basketball is unmatched. And Staley wasted no time establishing herself as a star. In 1989, as a freshman, she scored her career-best 37 points — at the time, a school record for points in a game — in a win over Wake Forest on Feb. 8. Three nights later she scored 24 points in a win over Duke. And four days after that, she topped 30 again, going for 34 in an overtime loss to Maryland.

Morgan Brian may be the most heralded player in Virginia women’s soccer history, but it was two former teammates of hers who might have posted the most impressive three-game stretches for the Cavaliers.

Caroline Miller scored five goals and had two assists over three games in late October in 2012.

And those weren’t just any three games. UVa won at No. 22 Virginia Tech, home against No. 22 Boston College and then on the road at No. 8 North Carolina. Miller scored the lone tally in the Cavaliers’ 1-0 win over the Tar Heels.

In 2015, Makenzy Doniak had five goals and three assists over the final two matches of the regular season and first game in the ACC tournament, a stretch that started with a four-goal first half against North Carolina State.

The Cavaliers won five games at the 2015 College World Series, on their way to the national championship, and Sborz was the winning pitcher in three of those and recorded a save in a fourth.

In 13 innings of relief work in Omaha, Sborz didn’t yield a single run. His final three outings — 10 scoreless innings in two games with Florida and one with Vanderbilt — saw him notch two wins and a save.

Virginia quarterback Brennan Armstrong runs the ball against North Carolina during the first half Saturday in Chapel Hill, N.C.

Ralph Sampson pumps up the crowd during ESPN's "College GameDay" in Charlottesville in 2015.

In December 1981, University of Virginia basketball center Ralph Sampson fended off two James Madison University opponents during a game at the Richmond Coliseum.