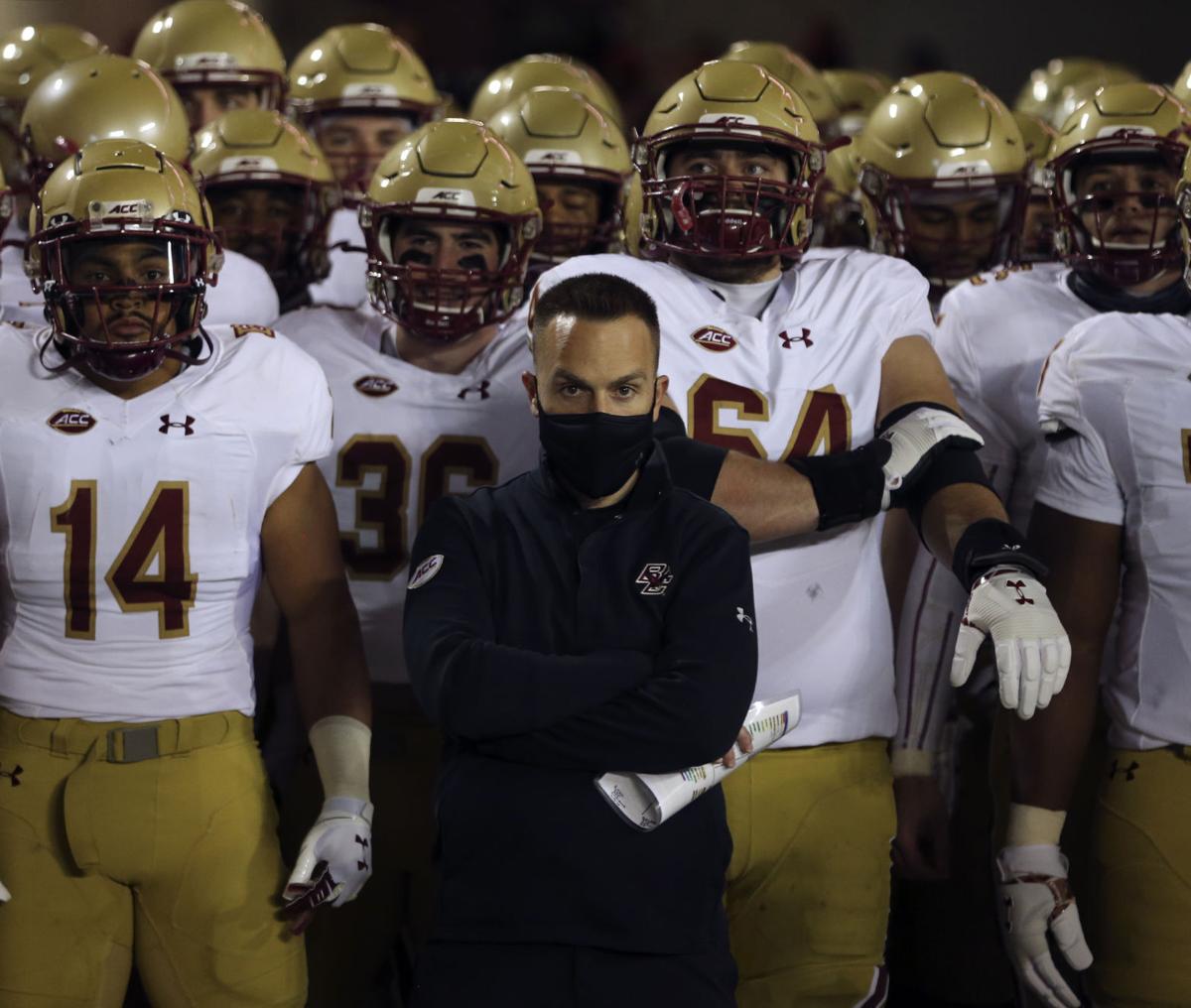 Boston College head coach Jeff Hafley and his team wait to take the field at the start of the Boston College-Virginia Tech game in Blacksburg on Oct. 17. 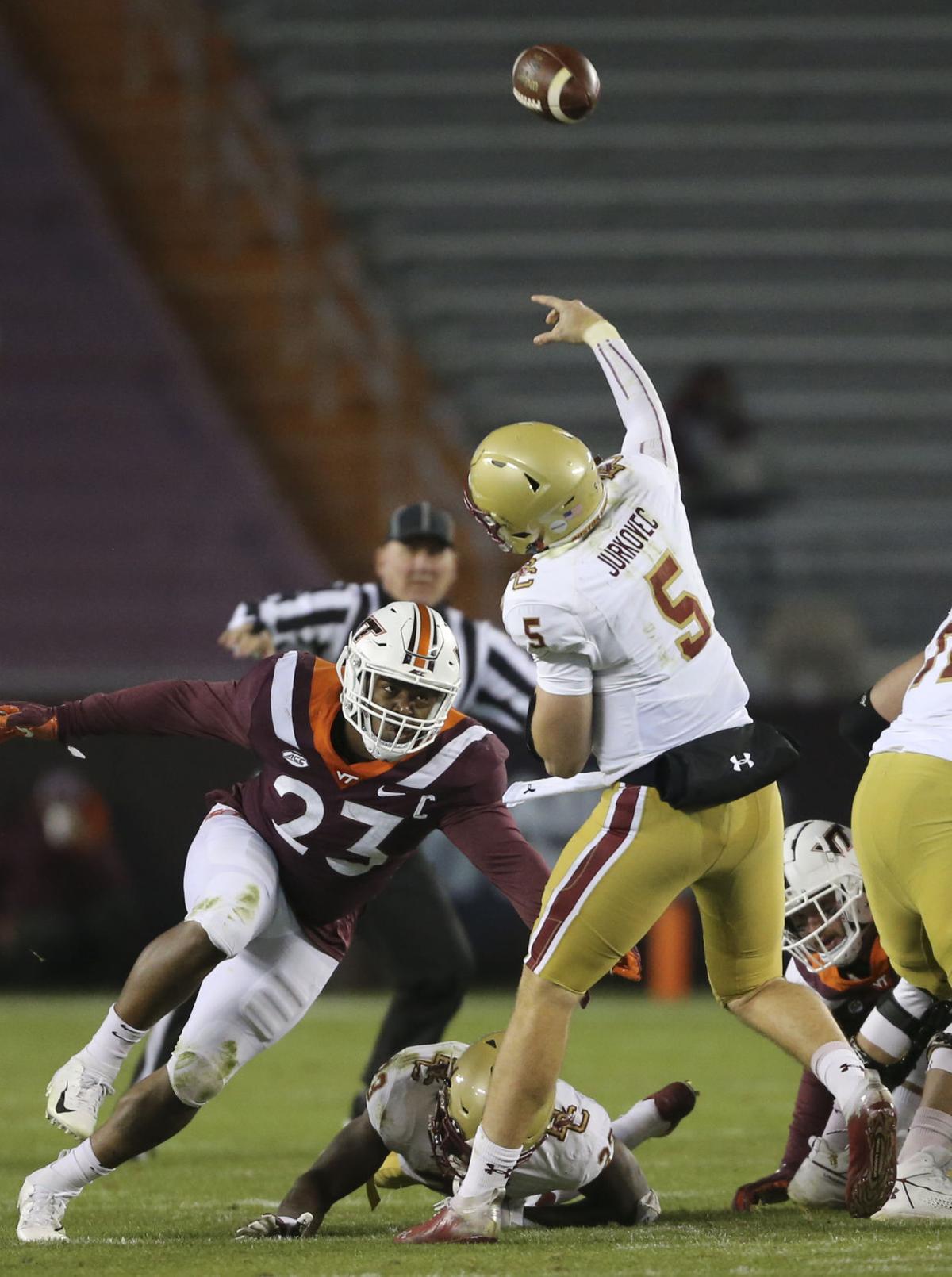 Until Virginia defeated Virginia Tech in the final football game of the 2019 regular season, there were constant reminders of a UVa losing streak against the Hokies that had reached 16 games.

What other streak was even close?

That question was answered as the Cavaliers’ game with Boston College neared. The Eagles, who come to Scott Stadium for a 4 p.m. kickoff Saturday, have won all six of their games against UVa.

The first was in 1963 and they didn’t meet again till 1994, when Boston College routed the Cavaliers 31-13 in the Carquest Bowl at Joe Robbie Stadium in Miami.

Dan Henning was the BC coach at the time and later would be followed in that post by two former UVa assistants, Tom O’Brien and Frank Spaziani.

The Eagles have had eight different head coaches since 1980, including the latest addition, Jeff Hafley, previously the defensive coordinator at Ohio State.

After going 6-7 last year under ousted predecessor Steve Addazio, the Eagles are 6-4 this season, including 5-4 in the ACC.

Since beating Duke and Texas State to open the season, Boston College has neither won nor lost two games in a row. The Eagles are 4-2 at home and 2-2 on the road.

“To be 6-4 when we were picked 15th [in the ACC] and to have a winning record in the ACC in our first year, I’m just very proud right now to be their coach and to be part of it,” Hafley said after the game.

Starting quarterback Phil Jurkovec has passed for 2,558 yards and 17 touchdowns but gave way to backup Dennis Grosel, who threw a touchdown pass while the Louisville game was still in doubt.

Jurkovec was wearing a wrap around his left knee at game’s end but was described as good-to-go by Hafley at midweek.

Virginia’s injuries have been well-documented, with outside linebacker Charles Snowden lost for the season with a broken ankle and safety Joey Blount having missed the past five games.

The Cavaliers were scheduled to play at Florida State on Nov. 28 but returned home when the Seminoles could not play because of COVID-19 issues.

“It’s been more [than usual] and I would say signifcantly more,” Mendenhall said of the injuries. “I don’t think it’s a difficult thread to pull and get to the origin.

“When our players left for spring break and then didn’t come back until we brought them back, that was a long, long time of training on your own.

“Many gyms weren’t open, so the preparation simply could not match what a normal year is or was.”

Mendenhall has continued to praise UVa quarterback Brennan Armstrong, who was sidelined by an early concussion, causing him to miss all of one game and half of another.

“Their last three games, I thought they’ve done really well on offense,” Hafley said. “The wideout [Billy Kemp] is a dynamic player. They’ll line him up in the slot, they’ll put him out at wideout and they’ll put him in the backfield.

“They do a lot on offense [with] a lot of different personnel groups, two tight ends, no backs, three wide receivers or two quarterbacks in the game. We’ve got to really prepare and make sure we’re on top of everything.”

On the CBS Sports website, Pitt is penciled in to play Washington in the Sun Bowl and Virginia is slotted against Kentucky in the Gator Bowl. However, the Cavaliers need to win one of their next two games, including next week’s showdown with Virginia Tech, to become bowl-eligible.

That’s another reason why the cancellation of Virginia’s scheduled game last week at Florida State was a loss, even if the Seminoles were 8 1/2-point underdogs.

“That’s talking about things that are too far in the future,” Mendenhall said. “Right now, we’re working to play and prepare for Boston College and our seniors’ last home game and, really, anything else in addition to that is just a distraction.”

Boston College head coach Jeff Hafley and his team wait to take the field at the start of the Boston College-Virginia Tech game in Blacksburg on Oct. 17.