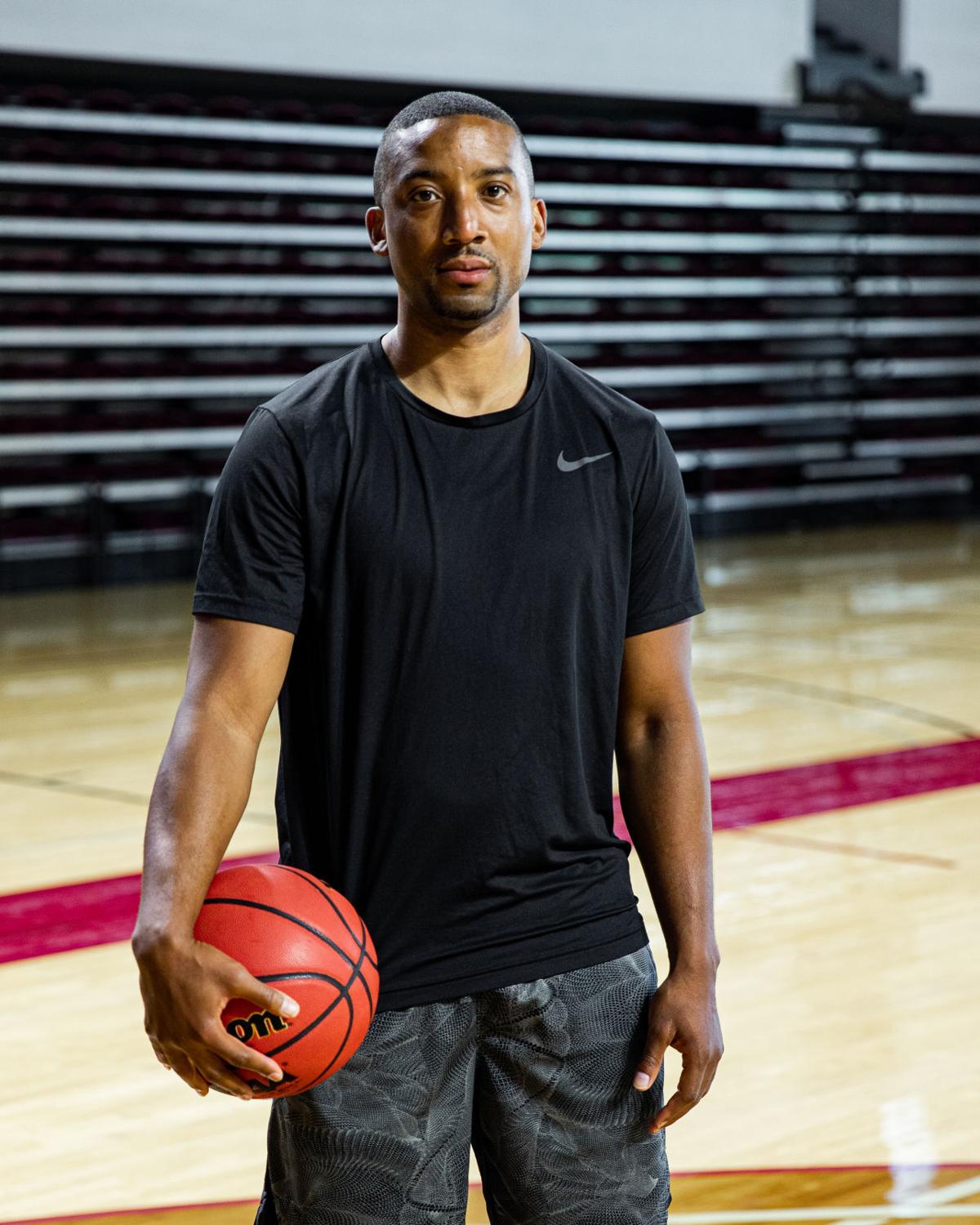 J.R. Reynolds poses for a portrait on Thursday at Roanoke College’s Cregger Center. 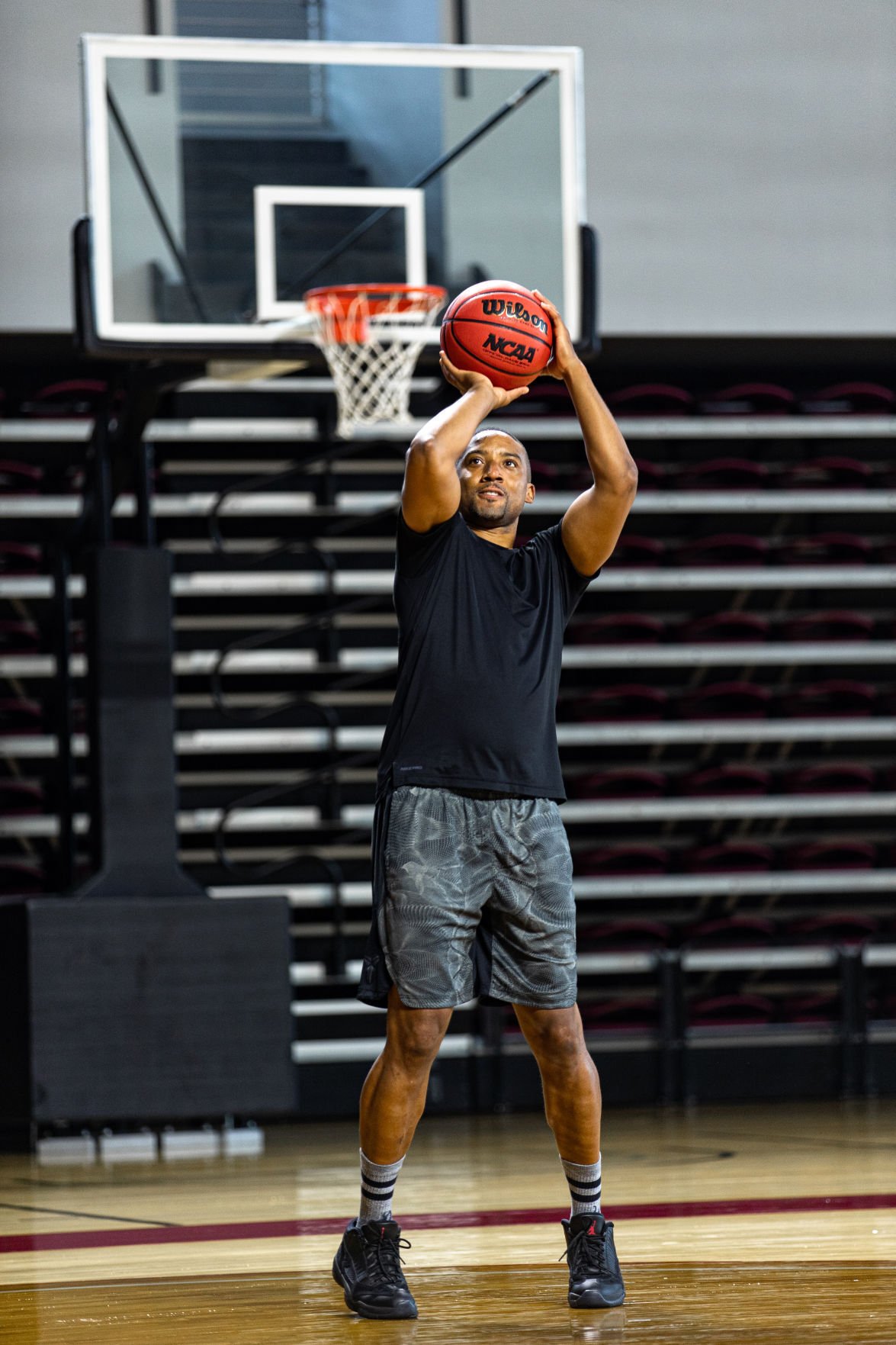 J.R. Reynolds shoots a jumper during a shoot around at Roanoke College’s Cregger Center on Thursday. 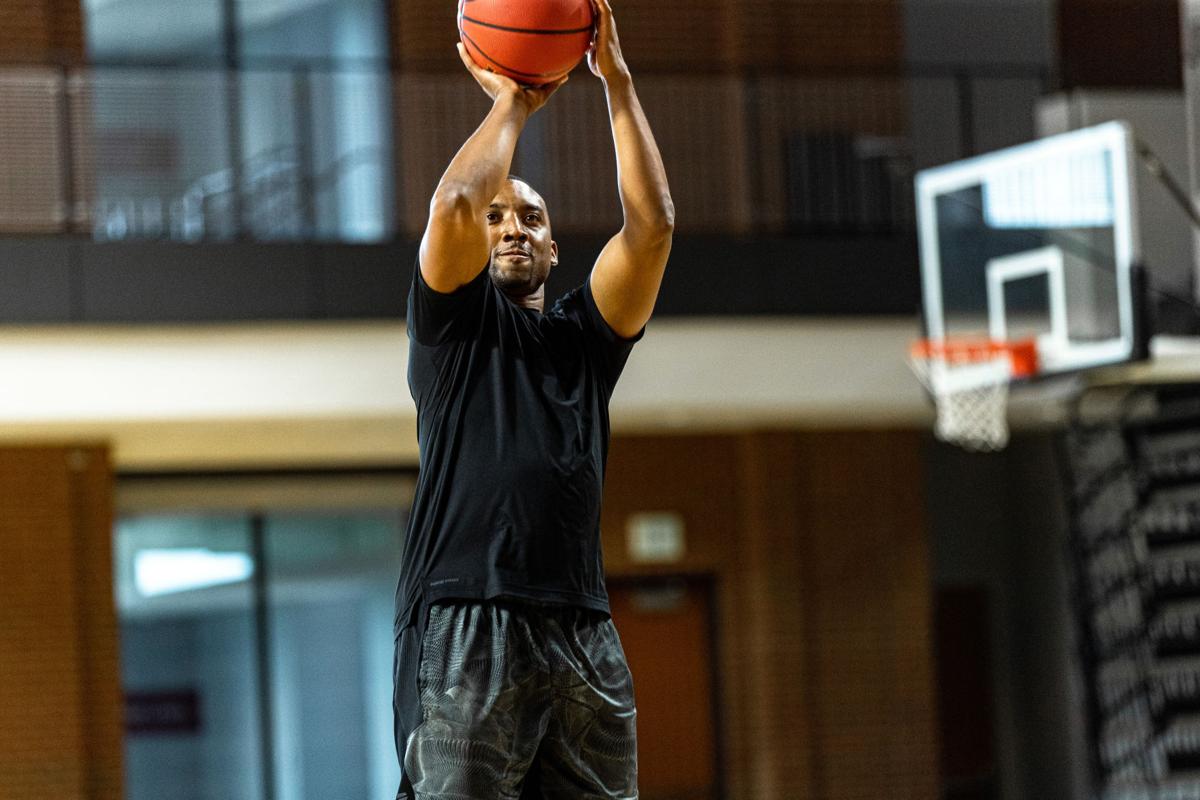 It was a rare homecoming recently when J.R. Reynolds stopped by the Cregger Center at Roanoke College and put up some jump shots before leaving town.

Reynolds’ next stop was in Charlottesville, where he ranks as the 13th all-time scorer in Virginia men’s basketball history following a 120-game career from 2003-07 that produced 1,683 points.

Where he goes after that is anybody’s guess.

At 36, there’s a possibility that he will be returning to Poitiers Basket 86 in the French Pro B League. He was the team’s leading scorer in 2019-20, averaging 12.5 points per game.

“So many places, huh?” said Reynolds, assessing his career.

Reynolds, whose initials stand for James Richard, was a star player at Roanoke Catholic, where he played on three state championship teams before spending his final year of high school at Oak Hill Academy.

At Virginia, he played on teams that were a combined 68-54 and made the NCAA Tournament in his senior year, under coach Dave Leitao.

Reynolds was recruited by Pete Gillen, the Cavaliers’ head coach for his first two seasons.

Since leaving UVa, Reynolds has played just three games in the U.S. all in 2011 with the Maine Red Claws in what is now known as the G-League. That was between stints with two French teams.

Throw in his time in Italy and he had a lot of different languages to process.

“You get used to it,” he said. “French, I know pretty well. I’m not fluent in it. I can go to restaurants and order things. In Montenegro, a couple people spoke English. You just find a way to adapt to their culture.”

It was a topic that came to light in a project by a former teammate, Phillip Wall, who is the son of former Roanoke Catholic coach Dick Wall and was a college player himself at Division III Williams College.

In 2013, Wall, by then a proven filmmaker, did a movie that encapsulated Reynolds’ experiences in Israel. The documentary titled “Roanoke to Tel Aviv” was selected for the Miami Short Film Festival.

Former Philadelphia 76ers GM and Radford men’s basketball coach Brad Greenberg was part of that film project, having served in the front office of the Maccabi Haifa basketball club in Israel.

This past season, Reynolds quarantined beginning in March as a result of the coronavirus pandemic.

“I’ve been home since the middle of May,” Reynolds said.

Home for the last seven years has been Atlanta.

“It was a place I had visited,” Reynolds said. “There are a lot of people I know down there and the workouts are really amazing. You can get everywhere from there.”

That was a reference to Atlanta’s worldwide airline connections, not that he has been going many places.

“I’ve been sitting around a lot, waiting to see what’s going to happen with the virus and all that,” Reynolds said . “Anything is possible.”

He currently does not have a team for next season.

“I want to play at least one more year and then get into coaching,” he said. “I won four championships, two in France and two in Montenegro. I’m satisfied with the career that I’ve had.”

He was contacted about a team that might represent Virginia in The Basketball Tournament, otherwise known as the TBT, where a team of mostly past Marquette players recently shared a $1 million pot for finishing first.

“The summer time is special, man,” Reynolds said. “That’s my time for rest, especially after a long season. My body needs to recover more than it used to. I was going to help out as much as possible, but I wasn’t going to play.”

Reynolds was a shooting guard throughout his UVa career, teaming with Sean Singletary, who was one year behind him.

Reynolds had 221 career 3-pointers (one less than Singletary), which ranks sixth on the Cavaliers’ all-time list.

“I can do a lot more than just score.”

It has been more than 13 years since he put up his last UVa field-goal attempt but he feels as close — or closer — to the program as he has since his playing days.

“Tony Bennett is an amazing person,” Reynolds said of the Cavaliers’ head coach. “I love him. Love him. On the day he got there, he just opened his arms, opened the facilities up to me. He welcomed me like I was one of his players.”

Reynolds’ father died four years ago, and it’s his mom, grandmother, a sister and a half-dozen cousins that he visits when he returns to Roanoke, as he did last week.

“Obviously, I would have liked to make the NBA,” Reynolds said. “Not everybody does, but I’ve gotten to experience different people and different cultures. It’s been an amazing journey.”

Starting offensive lineman Dillon Reinkensmeyer is out for the rest of the season after being injured in Saturday's game.

CHARLOTTESVILLE — There was a cloud hanging over host Virginia from the opening minutes Saturday night at Scott Stadium.

In the region: Virginia loses in ACC men's soccer semifinal

A starting defensive lineman is off the roster while a transfer running back made his debut Saturday for UVa.

UVa will open the men's basketball season in Connecticut with games against Maine and Florida.

J.R. Reynolds poses for a portrait on Thursday at Roanoke College’s Cregger Center.

J.R. Reynolds shoots a jumper during a shoot around at Roanoke College’s Cregger Center on Thursday.