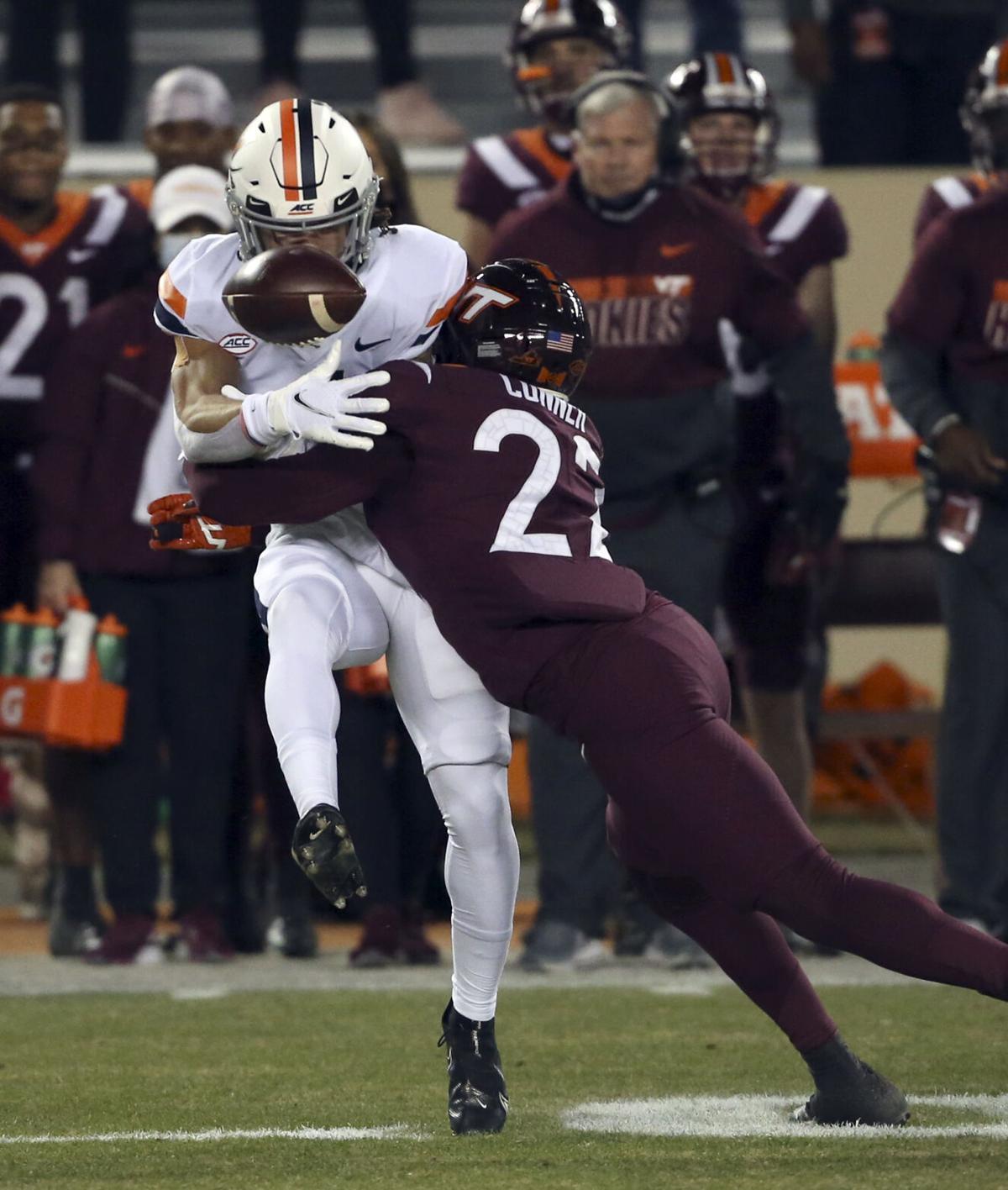 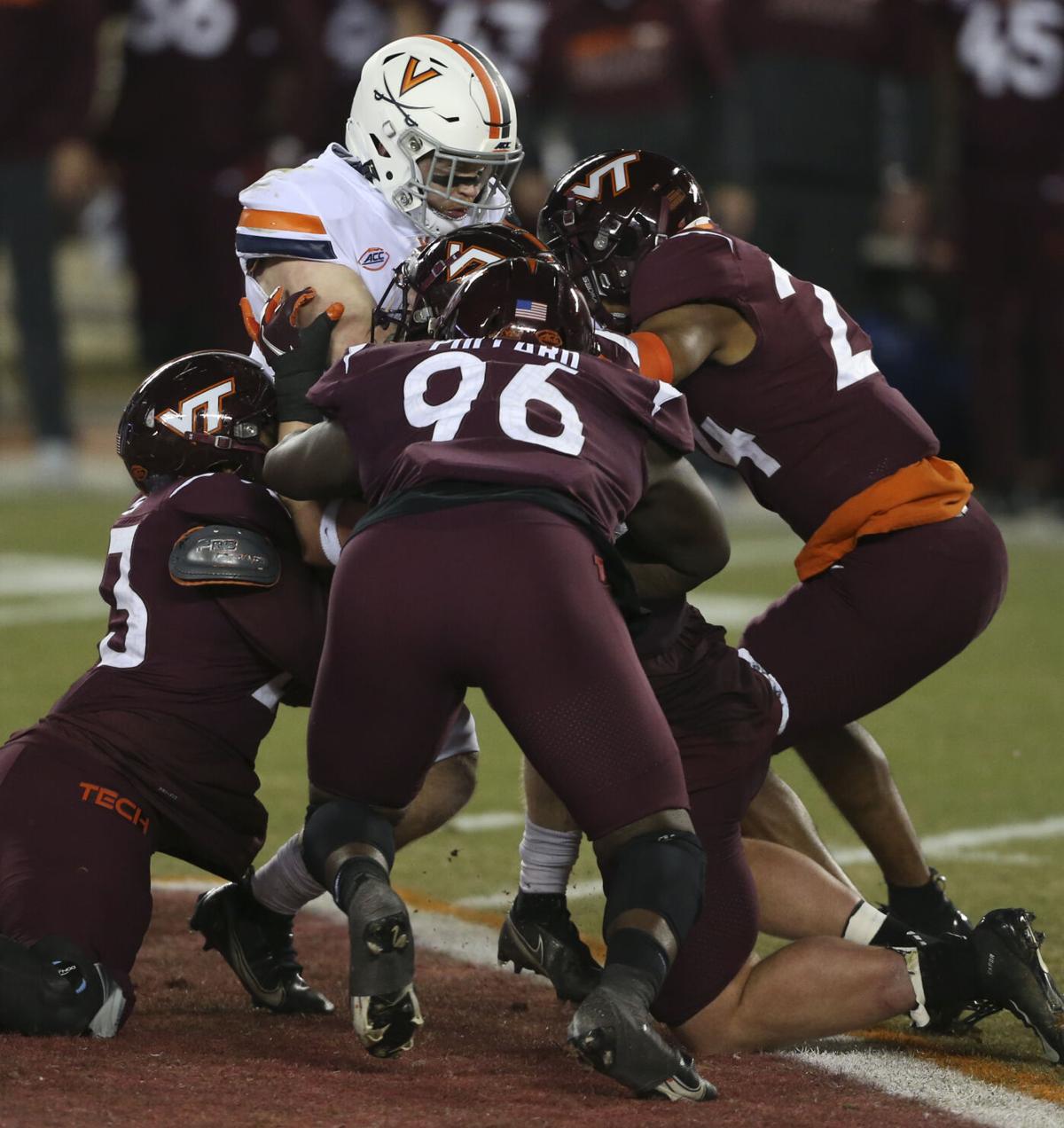 Virginia quarterback Brennan Armstrong is stopped by Virginia Tech defenders in the first half of Saturday’s game in Blacksburg. 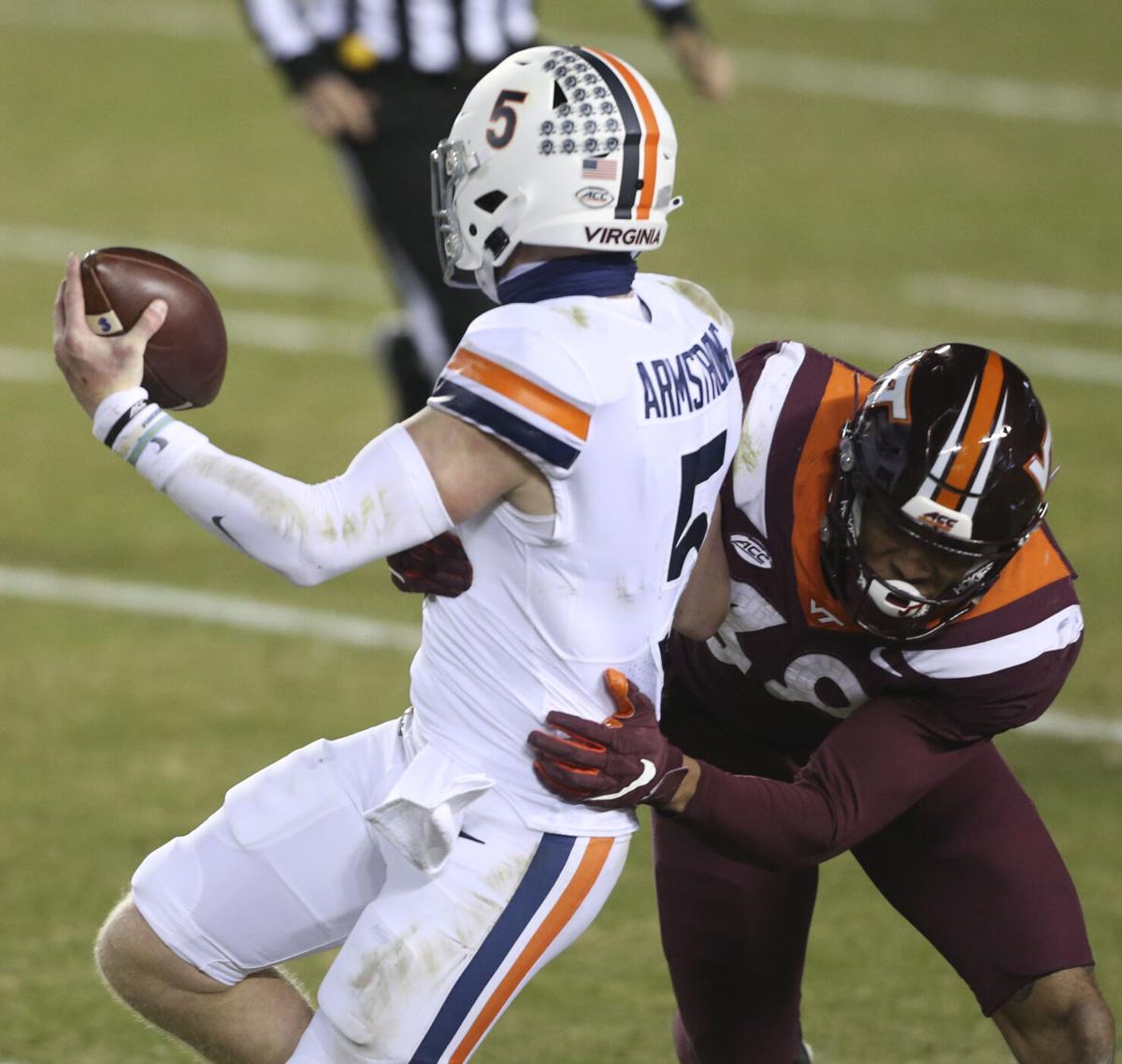 BLACKSBURG — As Virginia’s football team can attest, the home-field advantage doesn’t require fans in the seats.

A 33-15 loss to host Virginia Tech on Saturday night left the Cavaliers at 0-4 on the road this season, with only one of those games decided by fewer than 17 points.

UVa was in play for a bowl game until coach Bronco Mendenhall met with team captains and other unit leaders Sunday and they decided to remove Virginia from bowl consideration.

The previous evening had not ended well for the Cavaliers, who had taken a 7-3 lead after going 75 yards on 14 plays on their first possession of the night.

There were almost no highlights for UVa after that and the Hokies (5-6, 5-5) broke the game open by scoring 17 points in the final 6:34 of the first half.

“That was a meltdown,” commented former UVa star Chris Long, who was making observations on Twitter. “Legit meltdown.”

The Hokies, tabbed as a 3 ½-point favorite despite losing their previous four games, beat the Cavaliers for the 11th straight time at Lane Stadium, before a maximum of 250 spectators, not counting those working the game.

There is no indication that piped-in noise was a factor for the Hokies, who have won 20 of the past 22 games in the series.

“We’re motivated already to get back to work.”

Heading into the game, Virginia ranked 127th out of 127 Football Bowl Subdivision teams in passing defense. On Saturday, the Cavaliers were no less vulnerable to the run.

Virginia was outgained 252-55 by the Hokies on the ground. That included four Tech sacks totaling 27 yards. Tech quarterback Braxton Burmeister wasn’t sacked and had seven carries for 36 yards.

UVa quarterback Brennan Armstrong, who had rushed for 130 yards one week earlier in a 43-32 victory over Boston College and was the Cavaliers’ leading rusher for the season, finished with 15 carries for 23 yards, counting 27 yards in losses.

“I think we put the defense in a tough position, not holding onto the ball enough and not making plays,” UVa wide receiver Terrell Jana said. “They were on the field a long time.”

The Hokies had possession of the football for more than 35 minutes, as opposed to the Cavaliers’ 24:42.

Tech was leading 13-7 in the second quarter when Khalil Herbert broke the game open with a 76-yard touchdown run. He finished with 20 carries for 162 yards.

“It’s a chip on my shoulder going into the offseason.”

Virginia had gone to bowl games in the previous three seasons, and had a bid been extended and accepted by the team this year it would have sent UVa to a fourth consecutive bowl for the first time since 2005.

“When my teammates voted me as captain, they put their trust in me,” Jana said after the game. “So, for me, it’s whatever they want to do is what I want to do. I don’t want to force guys that don’t want to play.”

Virginia quarterback Brennan Armstrong is stopped by Virginia Tech defenders in the first half of Saturday’s game in Blacksburg.