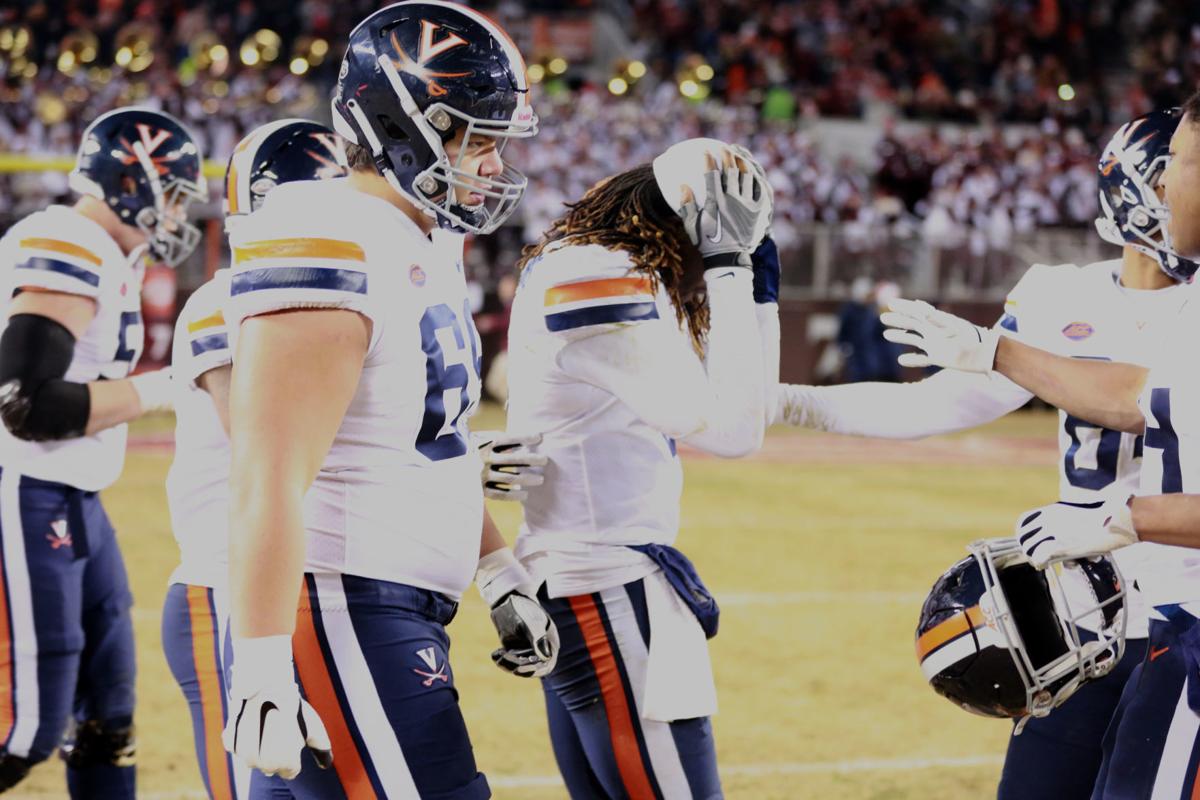 UVa quarterback Bryce Perkins holds his head after fumbling in 2018 on the last play of the Cavaliers’ overtime 3-point loss at Virginia Tech. 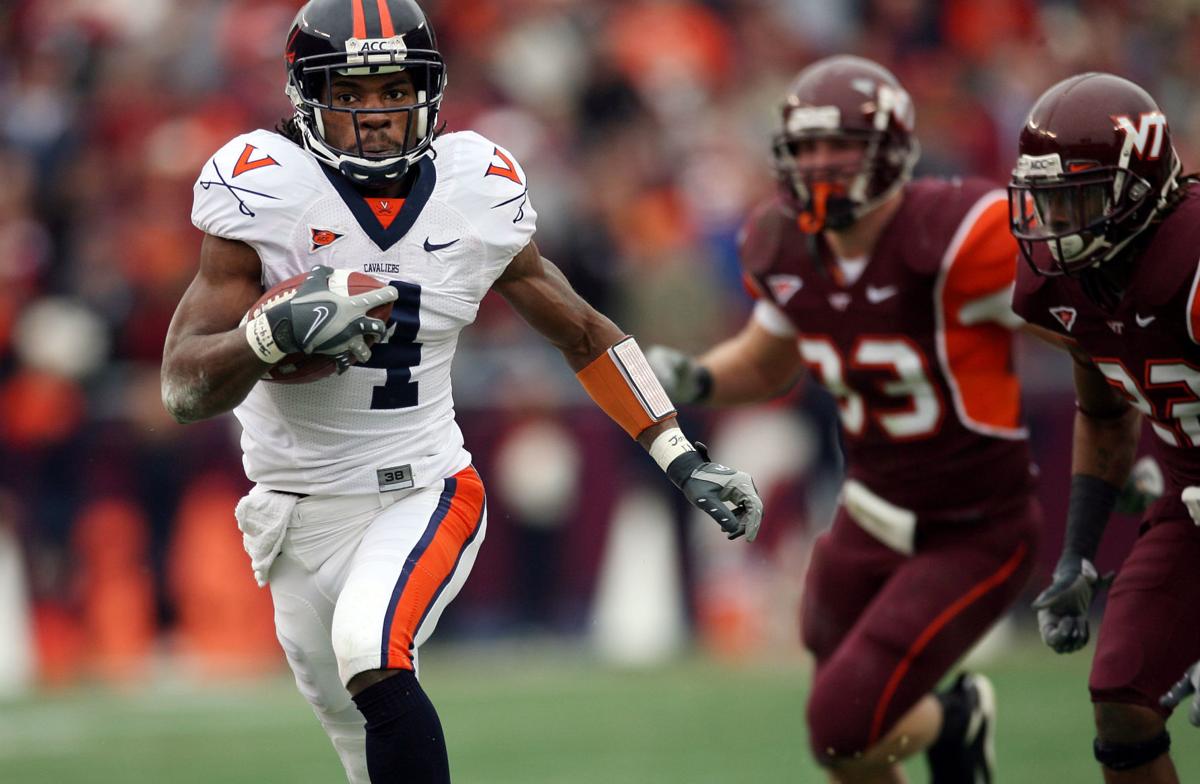 Former Virginia defensive star Vic Hall (left) surprised Virginia Tech in 2008 when he started at quarterback. However, he was not on the field when Marc Verica threw a game-deciding interception late in the fourth quarter.

If the streak is to end Friday, Virginia has to avoid the “yoink!” moment.

You know the one. It’s the “Peanuts” metaphor many of us have used for years to describe this Commonwealth Cup series: Virginia Tech is Lucy teeing up the football with her finger; UVa is Charlie Brown, talking himself into believing that this time, finally, he’ll get to kick it.

Charlie Brown begins to sprint, he approaches the ball and — yoink! — Lucy jerks the ball away and the poor boy goes flying.

Not every year feels like that, of course. Tech has been a healthy favorite in some of these games and has won convincingly on multiple occasions. Those seasons, Charlie Brown doesn’t even bother to make his approach.

But five times during their 15-game winning streak in the series, the Hokies have won by four or fewer points. There’s a definite yoink moment in every one of those wins. And there could be one again this year, as the Vegas line has been set at Tech by 2.5.

Let’s take a look at the kind of fatal errors UVa can’t make if it wants to alter history:

2008 (VT 17, UVa 14): The excitement of seeing Vic Hall at quarterback for the first time in his career has tapered off by the fourth quarter, when the game is tied 14-14. Dustin Keys kicks a 28-yard field goal to give Tech a 17-14 lead midway through the period.

UVa coach Al Groh is rotating Hall and Marc Verica at QB on the ensuing series. A 39-yard run by Hall gets the ball to the VT 24. In comes Verica, inexplicably.

Three plays later, on third-and-11, Verica throws for the end zone and — yoink! — there is Dorian Porch to pick it off with 2:15 left.

“He didn’t see me coming. I kind of was baiting him into it,” Porch said that day. “When he threw it up in the air, it was just like gold falling out of the sky.”

With 3:21 remaining, UVa quarterback Michael Rocco throws a pass that is intercepted by Antone Exum.

But that’s not the yoink. Not yet. That comes courtesy of UVa coach Mike London.

With about a minute left, Tech drives into the red zone. It’s quite clear the Hokies are going to score. The Cavaliers have two timeouts remaining, but London doesn’t use them — not until the Hokies are lining up for a 29-yard field goal on fourth-and-12 with four seconds left.

London spends both timeouts. Tech kicker Cody Journell is unfazed. He splits the uprights and — yoink! — there’s no time left for UVa to respond.

Even after the Hokies answer with a touchdown of their own, UVa has a chance, driving to the VT 36 with 12 seconds left.

UVa quarterback Matt Johns drops back, and here come Ken Ekanem and Dadi Nicolas to — yoink! — end the game with a fourth down sack.

For the Cavaliers, a field goal here would be a minor scratch and a potential momentum shift. Instead — yoink! — Tech receiver Isaiah Ford gets behind the secondary and catches the touchdown pass that turns the game for good.

2018 (VT 34, UVa 31, OT): The botched exchange in overtime between UVa QB Bryce Perkins and running back Jordan Ellis is the obvious yoink moment — one that can and should be discussed a ton this week — but consider that UVa’s defense needed only to hold a struggling Tech offense without a touchdown in the final 2:41 of regulation to win this game.

UVa had the Hokies facing a third-and-10 at the VT 25 before Dalton Keene made a miraculous 45-yard catch. Tech’s game-tying touchdown came then on a fumble recovery — one where both teams had a shot at the ball.

And maybe that’s the lesson here: As much as that “Peanuts” metaphor seems to fit, it’s never truly one moment that decides these games.

Regardless, let’s see it, Lucy. Laces out.

If there have been times when Jay Huff has kept Virginia men’s basketball fans on the edge of their seats, none would have topped Huff’s move …

There is no room for negotiation on one key point as Atlanta organizers consider multiple contingency plans for three season-opening games, in…

The first thing that Ricky Brumfield wants people to understand is that Virginia has had a respectable tight ends game.

There is no room for negotiation on one key point as Atlanta organizers consider multiple contingency plans for three season-opening games, in…

It was a rare homecoming recently when J.R. Reynolds stopped by the Cregger Center at Roanoke College and put up some jump shots before leaving town.

Bryant Stith believed he was taking all the necessary precautions to avoid contracting COVID-19.

While North Cross School doesn’t have a history of churning out Division I football prospects,

UVa quarterback Bryce Perkins holds his head after fumbling in 2018 on the last play of the Cavaliers’ overtime 3-point loss at Virginia Tech.

Former Virginia defensive star Vic Hall (left) surprised Virginia Tech in 2008 when he started at quarterback. However, he was not on the field when Marc Verica threw a game-deciding interception late in the fourth quarter.