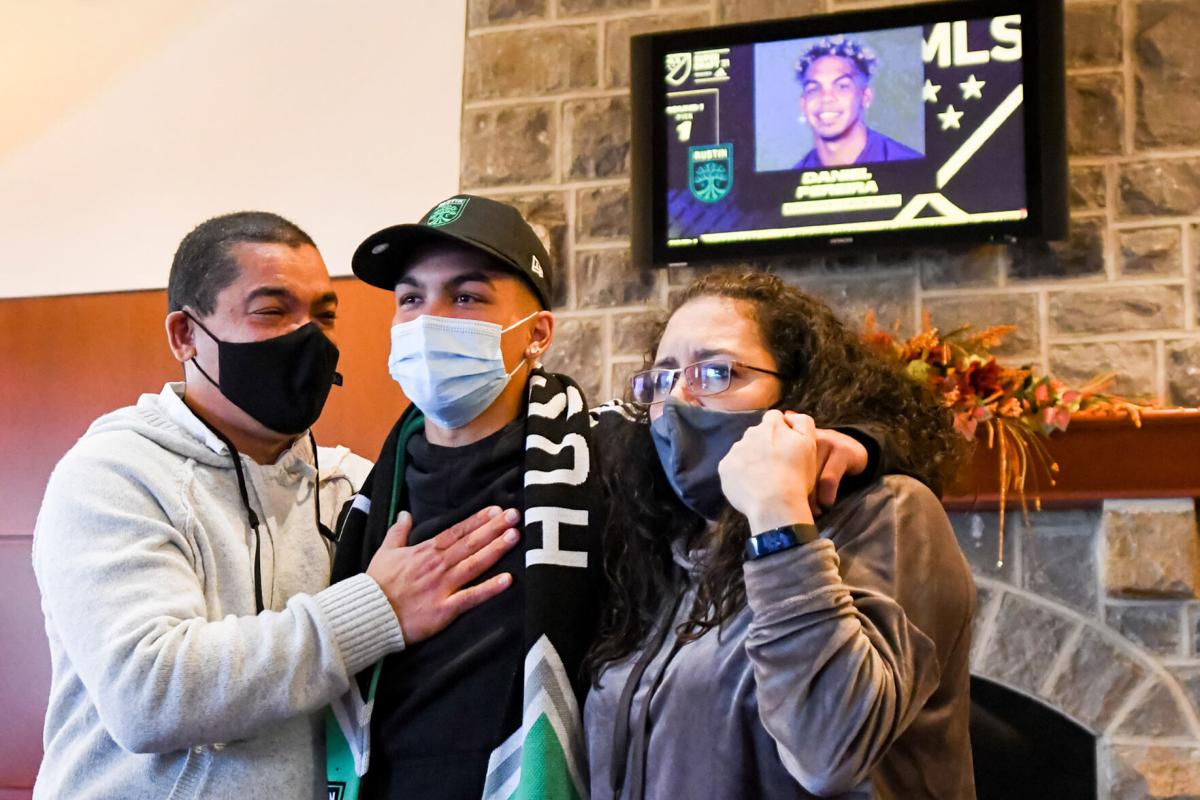 Virginia Tech midfielder and Northside graduate Daniel Pereira (center) is embraced by his father, Hector Pereira, and his mother, Katiuska Gil, in a Lane Stadium suite after getting chosen by Austin with the No. 1 overall pick in the MLS SuperDraft on Thursday. He donned an Austin hat after getting picked. 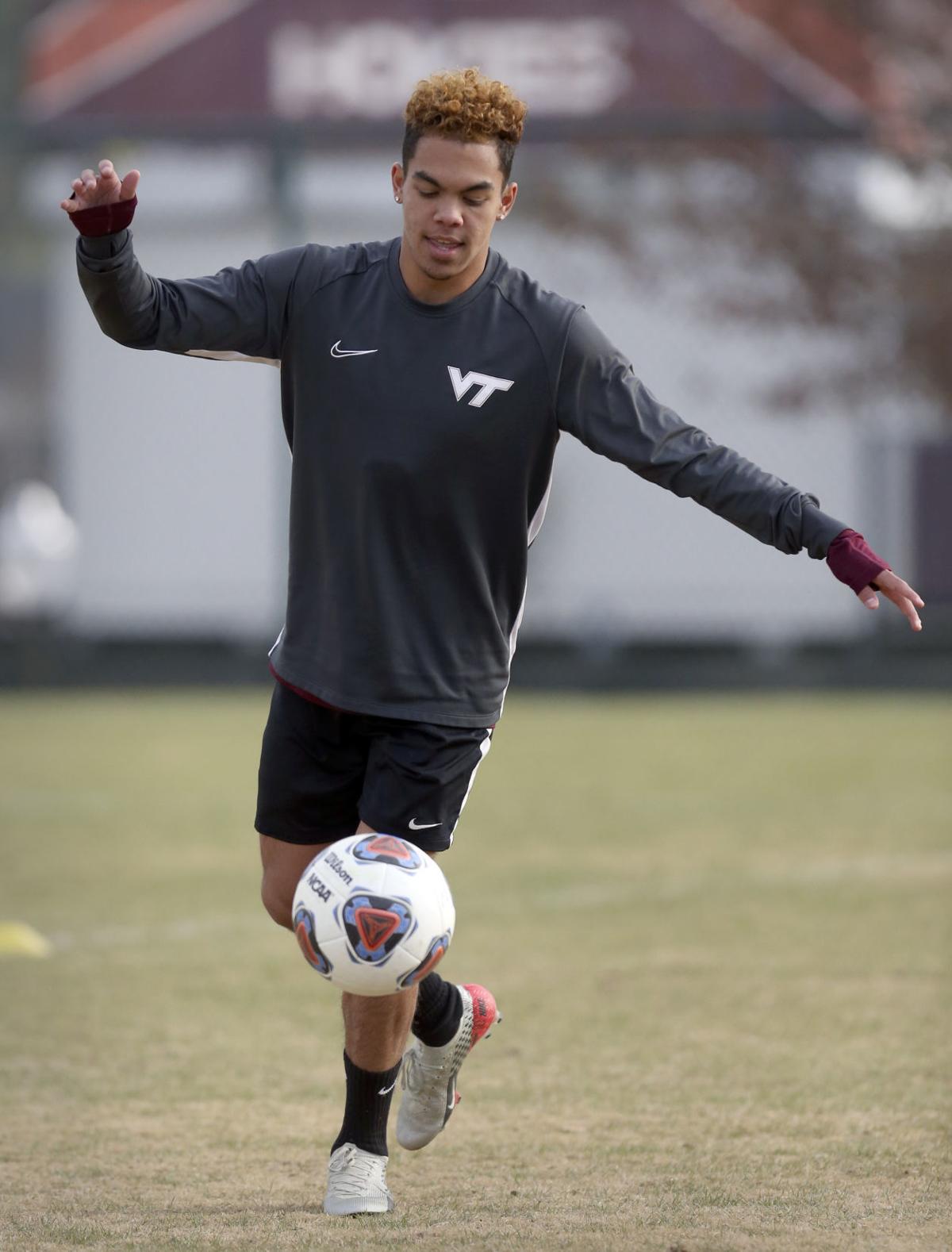 Northside graduate Daniel Pereira of the Virginia Tech men’s soccer team was chosen by Austin with the No. 1 overall pick in the Major League Soccer draft. The sophomore turned pro last month.

It was a little after 2 p.m. Thursday at a suite in Lane Stadium, and a red-letter day for Roanoke Valley soccer had begun.

“As soon as he gets picked, we have people crying and screaming and laughing and jumping up and down,” Northside High boys soccer coach Lorstan Allen said, describing the scene in Blacksburg immediately after his former player, Daniel Pereira, was selected No. 1 overall in the MLS SuperDraft. “I mean, this is probably one of the coolest things I’ve ever been a part of.”

And it only got better. Not long after that, Patrick Henry High graduate Irakoze Donasiyano went off the board with the 20th overall pick.

Think about that. Two young men from the Roanoke Valley, groomed in the same VBR Star Soccer Club and educated at Timesland schools located just 7 miles apart, both taken in the opening round of a professional league’s draft.

And the local soccer community rejoices.

“It just all of a sudden turned emotional for me for some reason,” said PH boys soccer coach Chris Dowdy, who watched the livestream of the draft on the couch with his family. “I’ve coached 17 years here at Patrick Henry and have never had a kid go pro. It’s not really the reason why you’re coaching anyway.

“To see a kid that you’re so emotionally invested in for so many years, it’s just really good to get to see them get to the level that they’ve always aspired to.”

Both these players joined VBR Star (formerly known as Roanoke Star) when they were 14. The club had never had an MLS draft pick before Thursday.

Oh, the club’s had some great players. The most notable was Northside graduate Danny Karbassiyoon, who signed with Arsenal in 2003 and became the youngest American to score a goal in a competitive English soccer match a year later. But these were the first two drafted domestically in any round, nevermind the first.

“To have two of them is phenomenal,” VBR Star executive director Danny Beamer said. “For a tiny little club like us — we compete against Loudon that has 14,000 players. ... It makes you feel good as a small club.”

Everyone could tell they were special right away. Pereira is a dynamo with the ball at his feet — distributing, scoring, making plays. Koze is versatile and fast and intelligent and strong on the ball.

But having talent isn’t always enough.

“They were these super-coachable kids,” said VBR Star director of coaching Chris McClellan, who attended Pereira’s celebration in Blacksburg. “They were everything that we ask from players. We as a club are just excited for them to push on. We were excited for them to move on to the ACC, and now to watch them both move on to something even bigger with the MLS kind of shows that they had a solid foundation from where they came from.”

And they haven’t forgotten where that is. Pereira and Koze have maintained relationships with their high school coaches and former teammates. Both Allen and Dowdy attended many college games to watch their former stars.

“He became more of a family member to us than anything else,” Allen said of Pereira. “That’s the cool thing. It’s not as much taking pride in a player; it’s more taking pride in watching somebody that you really care about. You’re watching them grow up. They’re your own.

“That was the cool thing about it. He’s family to us. He just is.”

Dowdy felt the same way about Koze. The PH coach texted Koze so often over the past two weeks that he figures he might have annoyed the young man.

“This might sound weird, but I think it ‘means’ more than it ‘says,’” Dowdy said. “These guys are going to come back into town. They’re going to visit their schools and their clubs. They’re going to garner a lot of attention of kids and youth. It’s probably going to blow up youth soccer when they come in.

“I told my wife just minutes ago, I’m brought to tears just thinking about this whole situation with Koze and him coming back to PH workouts and kids flocking just to see him and get his autograph. That’s what it’s going to mean.”

Will it mean Southwest Virginia suddenly will become a soccer pipeline to the pros? No, probably not.

But as we pick up those phones and close those jaws, we can always say that we had our day.

Virginia Tech midfielder and Northside graduate Daniel Pereira (center) is embraced by his father, Hector Pereira, and his mother, Katiuska Gil, in a Lane Stadium suite after getting chosen by Austin with the No. 1 overall pick in the MLS SuperDraft on Thursday. He donned an Austin hat after getting picked.

Northside graduate Daniel Pereira of the Virginia Tech men’s soccer team was chosen by Austin with the No. 1 overall pick in the Major League Soccer draft. The sophomore turned pro last month.