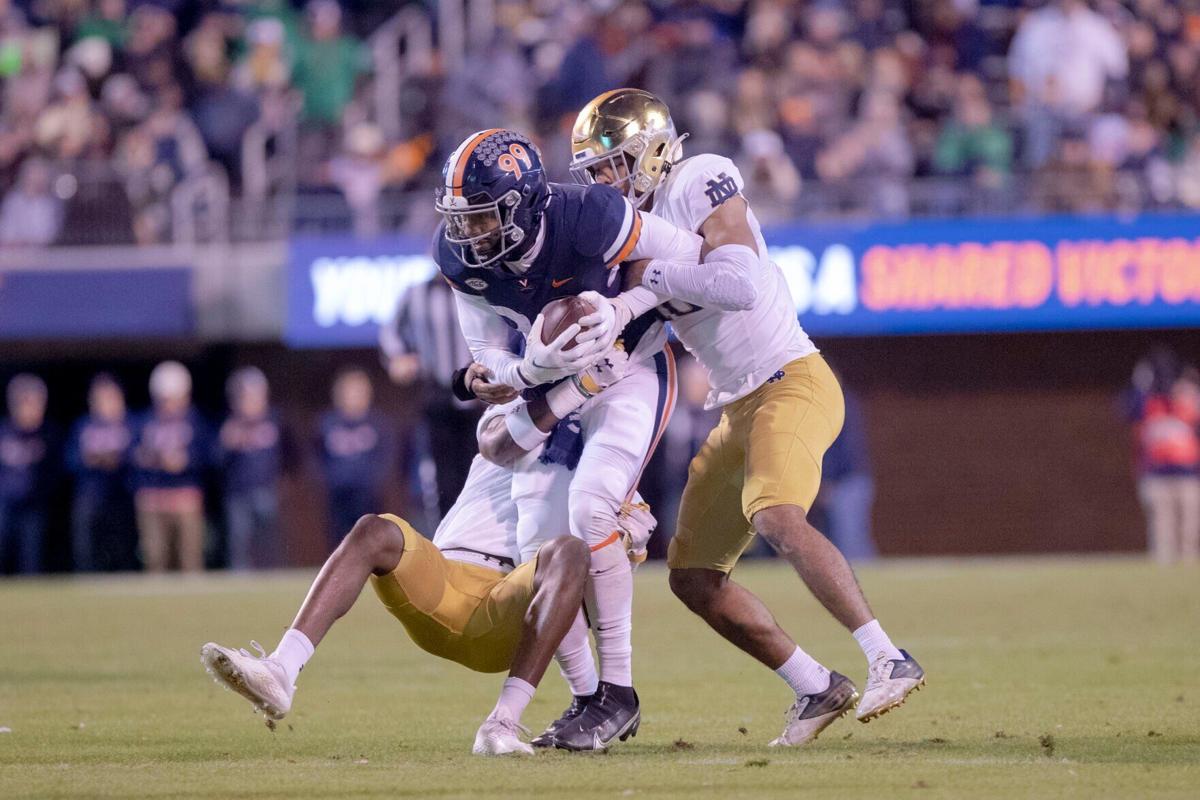 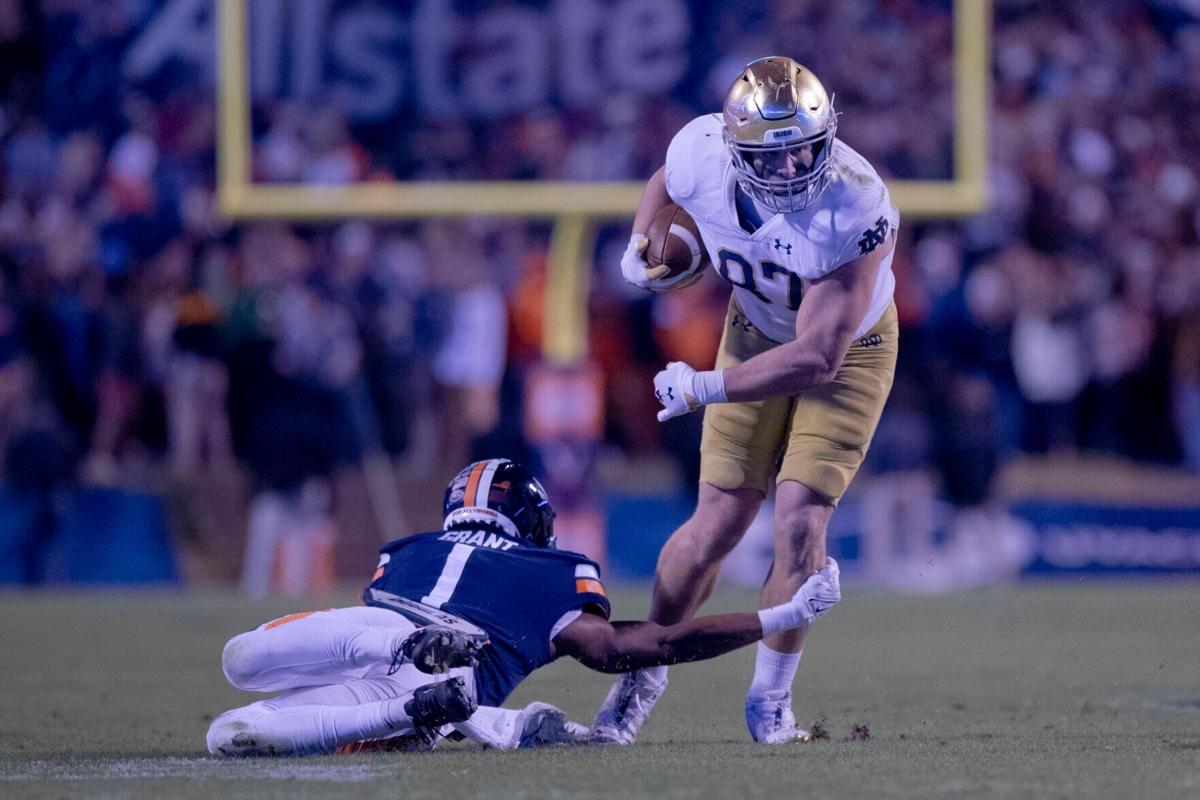 CHARLOTTESVILLE — One of the sport’s bluebloods spent Saturday evening practicing acrobatics and aerodynamics during a runaway victory against an opponent that didn’t appear it could belong on the same field without its established, standout quarterback.

Notre Dame running back Logan Diggs hurdled Virginia’s trying tackler Anthony Johnson on a 26-yard run to set up wide receiver’s Braden Lenzy’s 4-yard touchdown catch to build a two-score advantage early in the second quarter. As Lenzy crossed the goal line, his gold-painted helmet split a pair of defenders as he leaped to lunge his body forward in an effort to get in the end zone.

It was that kind of night for the No. 7 Irish, who racked up 425 total yards and took advantage of every missed tackle by the Cavaliers’ defense to rout UVa 28-3 in front of an eager, but ultimately disappointed home crowd of 48,584 at Scott Stadium.

Notre Dame extended its regular-season winning streak over Atlantic Coast Conference foes to 23 straight and the Irish beat an unranked opponent for the 40th consecutive time — the longest such streak in the country.

Kyren Williams, Notre Dame’s (9-1) star starting running back, got in on the action, too, when he dashed around, juked and avoided one UVa (6-4) defender after the next during a 22-yard touchdown run to push the Irish’s advantage to 21-0 before halftime.

Williams, who finished with 70 rushing yards on 14 attempts as well as two catches for 15 yards, also had a 14-yard carry on a fourth-and-1 from the UVa 20 in the opening stanza. Initially, the Irish lined up for a field goal, but coach Brian Kelly called timeout, thought it over and sent his offense back out for another fourth-down try when the game was scoreless.

Earlier in the first quarter, the Cavaliers got a fourth-and-1 stop inside their own territory when defensive lineman Aaron Faumui tackled Irish quarterback Jack Coan on a sneak attempt.

This time, though, Kelly and Notre Dame offensive coordinator Tommy Rees put the ball in the hands of the team’s most dynamic player. Williams converted it, and on the consequent snap, Coan threw a 6-yard touchdown pass to tight end Michael Mayer for the game’s first points while capitalizing on UVa punter Jacob Finn’s shanked punt. It only went 14 yards and netted Notre Dame great field position.

When Virginia had the ball, it mustered only 278 yards of offense and didn’t pick up its first down until the second quarter with junior signal-caller Brennan Armstrong sidelined.

Armstrong, who suffered an injury to his ribs in last month’s loss at BYU, threw a few passes lightly during pregame while wearing his customary warm-up shirt and sweats, but never put his shoulder pads or helmet on. Instead, he sported a headset and appeared to be chatting with freshman backup Jay Woolfolk — who got the nod in Armstrong’s place — on the sideline in between offensive series.

Woolfolk became the first true freshman quarterback to start at UVa since Bryan Shumock did it in 1977.

In the loss, Woolfolk was sacked seven times including on three occasions in Notre Dame territory to halt the few possessions UVa threatened.

He finished 18-of-36 for 196 passing yards with two interceptions in his starting debut, and created a steady rapport with Hoos wide receiver Keytaon Thompson, who made a team-best nine catches for 110 yards. Five of Thompson’s receptions went for first downs.

UVa’s only points came on a 34-yard field goal from kicker Brendan Farrell.

But it wasn’t enough for the Cavaliers, a team also without starting running back Wayne Taulapapa (concussion) Saturday night and who watched their leader in receptions entering the bout with Notre Dame, wide receiver Billy Kemp IV, limp off the field with an injury and not return.

After consecutive nonconference losses, UVa returns to ACC play next Saturday when it travels to Pittsburgh for a contest that could decide the Coastal Division race.​

Virginia headed to New Jersey for two basketball games in the Legends Classic very much “a work in progress,” as coach Tony Bennett said multiple times this month.

Toutville: Will Cavaliers cover against Hokies?

We all know that the Commonwealth Cup has been extremely one-sided in recent years, with Virginia Tech winning 16 of the past 17 meetings agai…

The win wasn’t the only encouraging sign for Virginia. After struggling with turnovers through its first four games this season it turned the ball over just four times Monday night.

McFarling: For Price-led Hokies, 'the VT never comes off'

The Hokies are a touchdown underdog for a reason. But they retain their fighting spirit.

The making of a 'football player': How Keytaon Thompson became UVa's do-it-all star

The making of a 'football player': How Keytaon Thompson became the Virginia football team's do-it-all star.

Part of Brennan Armstrong's transformation into Virginia’s trusted, standout signal-caller and one of the top quarterbacks in the ACC and nationally, has origins at a setback.