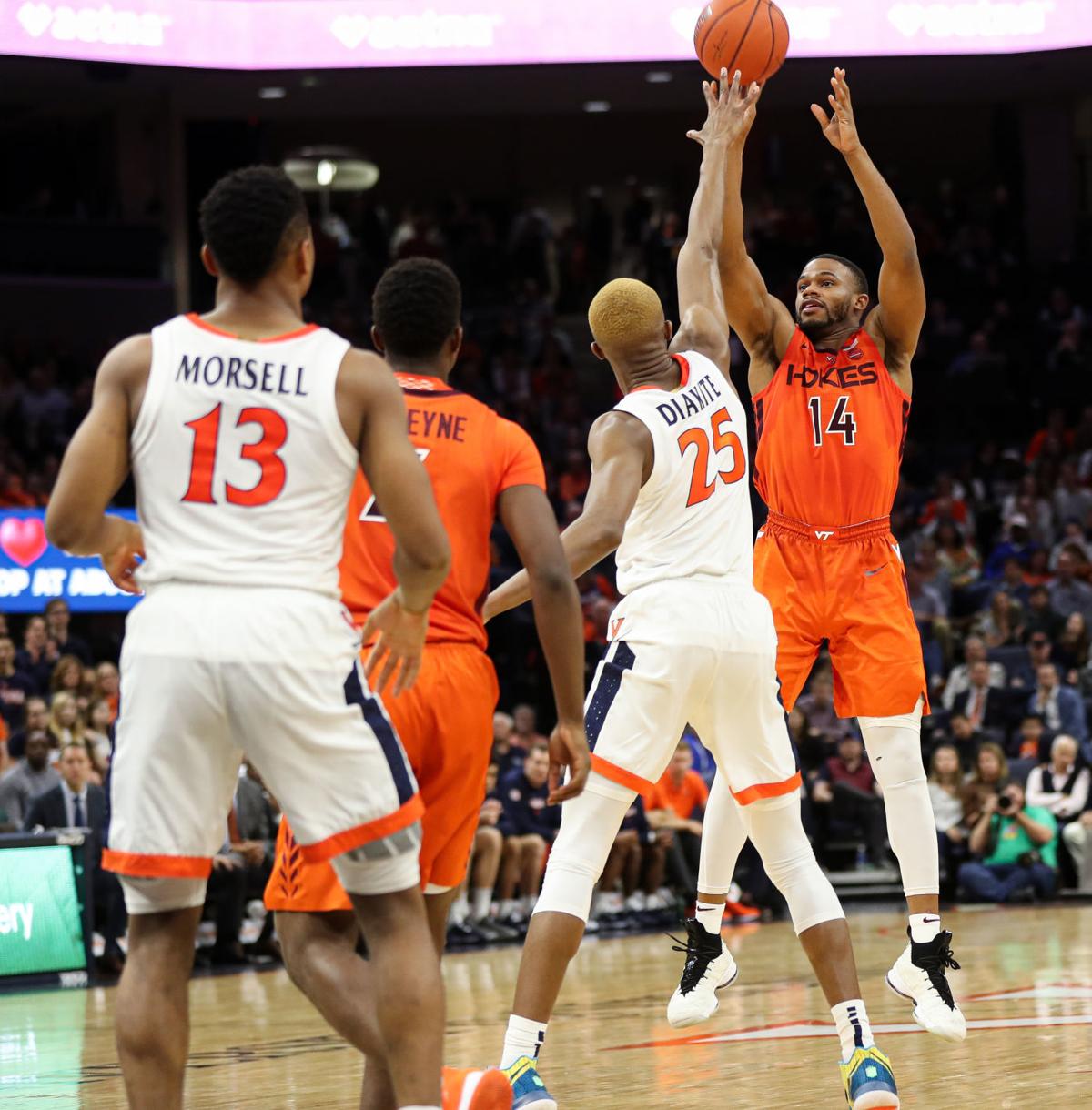 Virginia Tech’s P.J. Horne (right) shoots a jumper over UVa’s Mamadi Diakite (center) in the second half of a game on Saturday. 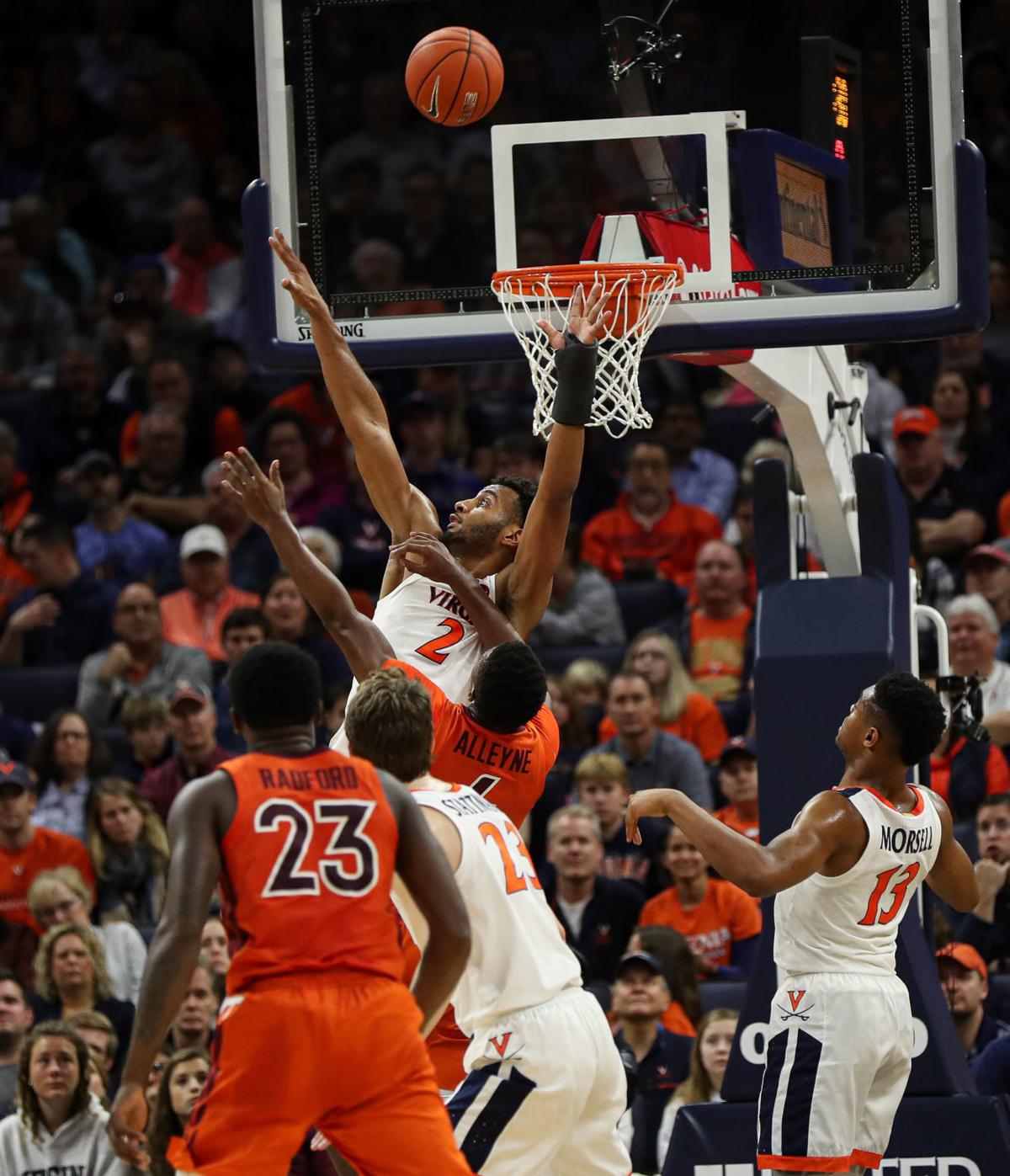 UVa’s Braxton Key (top) looks to defend a shot by Virginia Tech’s Nahiem Alleyne (center) in the first half of a game on Saturday in Charlottesville.

CHARLOTTESVILLE — Through the first two months of the season, the Virginia Tech men’s basketball team had developed a reputation for making a lot of 3-pointers and for not making many turnovers.

Tech did not live up to that reputation Saturday, though.

“We got wide-open looks. We just couldn’t hit them,” said Tech redshirt freshman Landers Nolley II, who had 18 points and five turnovers. “We couldn’t knock them down like we usually do. And that happens. Good teams have bad games.”

The Hokies entered the game leading the nation in fewest turnovers per game (9.5). But they had 13 turnovers Saturday.

“We can’t end the game with 13 turnovers and expect to win,” Nolley said. “The turnovers were horrifically stunning to me.”

Tech (10-4, 1-2 ACC), which has four freshmen and two redshirt freshmen in its nine-man rotation, was held to its fewest points since a 43-33 loss at East Carolina in February 1967.

“Experiences like that are a part of growth. I wish it hadn’t happened. It’s painful. But it did,” Young said.

The Hokies shot just 27.1% from the field against UVa’s Pack Line defense — its worst percentage since a February 2008 loss to North Carolina.

“We got great looks from the people we want taking shots. It just wasn’t falling,” Nolley said.

The Hokies entered the game ranked fifth nationally in 3-pointers (10.8 per game) and 11th in 3-point field-goal percentage (39.4%)

But Tech shot a season-low 16% from 3-point range against the Cavaliers.

“We’re going to have a hard time if we can’t ring the bell from back there,” Young said. “Credit to UVa for maybe speeding us up.”

“They always have a great defense, forcing us a little bit out of our pace,” said junior point guard Wabissa Bede, who had no points, two assists and two turnovers. “I’ve just got to be stronger with the ball, deliver a better pass, be on point so my guys can be able to knock down shots.”

Virginia Tech had three turnovers in the first four minutes.

Tech had averaged just 6.2 turnovers in the past four games. But Tech had six turnovers with 11:32 left in the first half Saturday.

“We were rushing,” Nolley said of that early stretch.

The Hokies had eight turnovers in the first half.

“That’s not like us,” Bede said. “It’s [about] me ... just being able to calm everybody down the whole time. It was all my fault.”

Tech trailed 30-17 at halftime after shooting 29.2% from the field in the first half.

He was just 1 of 6 from the field in the second half, though.

“I couldn’t get the rhythm like I caught in the first half,” he said. “I should’ve [done] other stuff to help my team win.

“We were [also] trying to get other guys going.”

Tech junior post player P.J. Horne was just 2 of 12 from the field in the game, including 0 of 9 from 3-point range.

“All of them were good,” Young said of Horne’s shot selection on his 3-point attempts. “Maybe three in the first half he looked a little rushed.”

“He struggled a little bit again. That’s a part of growing up,” Young said. “You get those demons in their head as a freshman and you’re not quite sure how to work out of that. You’re typically coming back with a little tiny Christian school where you can work some bugs out and get some open looks. But that’s not going to happen in this league.”

CHARLOTTESVILLE — Before his first visit to John Paul Jones Arena as the Virginia Tech men’s basketball coach, Mike Young could have seen a ra…

Virginia Tech’s P.J. Horne (right) shoots a jumper over UVa’s Mamadi Diakite (center) in the second half of a game on Saturday.

UVa’s Braxton Key (top) looks to defend a shot by Virginia Tech’s Nahiem Alleyne (center) in the first half of a game on Saturday in Charlottesville.