Most of us are too young to remember Pearl Harbor, or even President Kennedy’s assassination, horrors that stunned the globe and resonate forever. This generation’s indelible tragedy, much of which unfolded on live television, is 9/11, for the lives it ended, the families it devastated and the retaliations it prompted.

Like many seismic events, 9/11 rippled into sports, the haven of games and revelry we’d like to think is insulated from the real world. But we know better. Sports does not, and should not, exist in a bubble.

So as we approach Saturday’s 20th anniversary of the terrorist attacks that brought down New York’s Twin Towers, crumbled portions of the Pentagon and scarred a field in southwestern Pennsylvania, let’s revisit that Tuesday morning, and its impact, through a sports lens.

Virginia golf royalty, two-time United States Open champion Curtis Strange was less than three weeks away from the honor of a lifetime: captaining the U.S. team against Europe at the Ryder Cup matches in England. Appearing at a corporate golf outing in Colorado Springs on Sept. 11, he was walking toward the pro shop at The Broadmoor resort when his phone buzzed.

It was Julius Mason of the PGA of America with a brief message: Find a television.

Inside the pro shop, Strange watched with others as the World Trade Center’s North Tower burned and a second plane hit the South Tower. Within an hour, the buildings collapsed.

The Ryder Cup was scheduled for Sept. 28-30, and the U.S. team was set to depart Sept. 22, after a White House send-off from President George W. Bush. As Strange drove a rental car the next two days from Colorado to his Williamsburg home, he was in frequent contact with PGA of America president Jim Awtrey, PGA Tour commissioner Tim Finchem and the 12 U.S. team members.

Headlined by football, college and professional sports had postponed weekend competition. The Ryder Cup, the next large international sports event on the calendar, had more time to deliberate but reached the same conclusion.

Delaying the biennial Ryder Cup until 2002 meant shifting the PGA Tour-sponsored Presidents Cup, a similar competition pitting the U.S. against an international team, from even to odd years.

“It was wonderful that the two organizations came together and worked on this, the PGA of America and the Tour,” Strange said. “It was a huge endeavor, and everybody worked together in a matter of four days to get it done. …

In the wake of a contentious 1999 Ryder Cup, Strange and 2001 European captain Sam Torrance had prioritized creating a more civil discourse between the teams, on and off the course. That camaraderie developed naturally after 9/11.

“The Ryder Cup took on more meaning,” Strange said, “more than just golf and Europe versus USA, and winner or loser. It was much more coming together, much more patriotic for us. Everybody knew why we were delayed a year, and it was utmost in everyone’s mind.”

Europe defeated the U.S. 15½-12½, but Strange still considers the week the greatest of his golfing life.

Fiercely partisan yet welcoming, the spectators at The Belfry made for a classic atmosphere. The two teams got along, and after attending the second day of competition, former President George H.W. Bush addressed the U.S. squad in a team room that Strange outfitted with even more patriotic gear than usual.

The power of sports

Scores of football games scheduled for the weekend following 9/11, including Penn State at Virginia and the Arizona Cardinals at Washington, were postponed. Virginia Tech already had an open date that weekend, but the following Saturday, Sept. 22, the Hokies played at Big East rival Rutgers, less than 40 miles from Ground Zero.

Tech associate athletic director John Ballein wanted a player to carry an American flag as the Hokies ran onto the field, and just prior to kickoff he asked junior linebacker Brian Welch to do the honors.

On Sept. 20, 1984, Welch’s father, Kenneth, a Bronze Star recipient in Vietnam, was among 24 killed by a truck bomb at a U.S. Embassy annex near Beirut. Brian was 5-years-old.

At Rutgers, Welch held the flag perfectly still as a bugler played taps, a soloist sang the national anthem and a choral group sang “God Bless America.” Then, on the game’s second play from scrimmage, he returned his first career interception 27 yards to the Rutgers 1, igniting the Hokies’ 50-0 victory.

“That’s the universe,” Welch told me a decade ago. “I did nothing right on that play. It was just my moment.”

Sports will mark the 9/11 anniversary this weekend, most notably with the earliest football meeting ever between Air Force and Navy. The Falcons and Midshipmen play Saturday in Annapolis, Md., and CBS is televising the contest nationally in its premiere 3:30 time slot.

Virginia Tech, Richmond (free tickets for first responders and military personnel), William and Mary and Virginia will mark the anniversary at their home football games Saturday, the Cavaliers with an F-22 flyover conducted by two UVa graduates: Air Force captains Chelsea Bailey and Nate Jewell from Langley AFB in Hampton.

NASCAR at Richmond Raceway and the Washington Football Team at its season opener Sunday, also have ceremonies planned.

Alas, such unity is the antithesis of our normal discourse.

“Everybody was an American,” Strange said of post-9/11. “It didn’t matter how you voted, what color you were or what your religion was, anything. How did we go south so quickly in this country? … It makes us look so childish and so immature. It’s embarrassing sometimes, how we speak to each other, how we think about each other.”

“I just hope,” Virginia Tech football coach Justin Fuente said, “that maybe when we reflect on [9/11] all these years later, we, and I, can do a better job of having some compassion and pride for our fellow Americans.”

Tom Brady says he could keep playing football until he's 50

Tom Brady says he could keep playing football until he's 50

A giant American flag covers the field in honor of the 10th anniversary of 9/11 before an NFL game between the New York Giants and the Washington Football Team on Sept. 11, 2011, in Landover, Md. 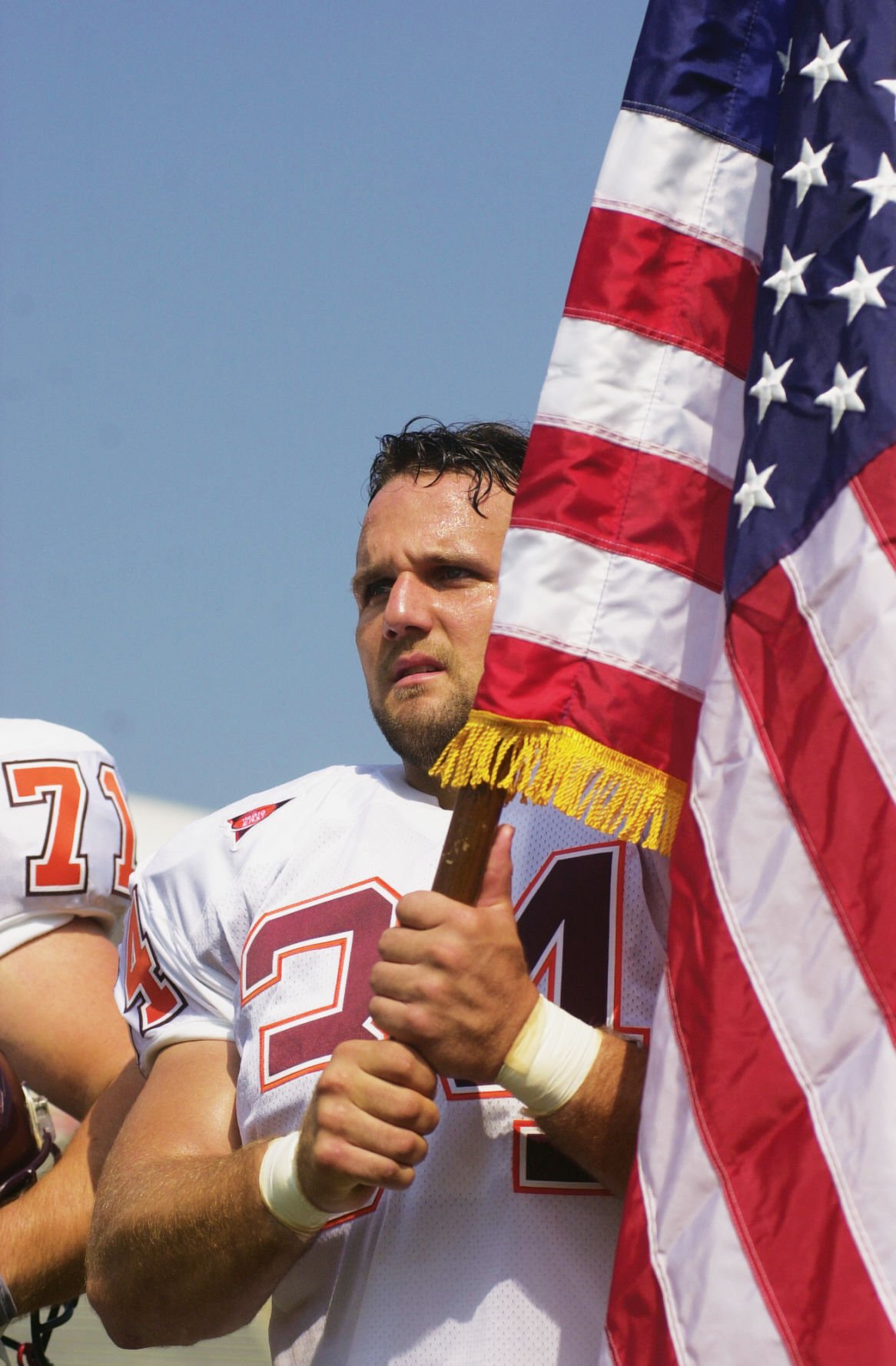 Virginia Tech linebacker Brian Welch carried the flag as the Hokies ran onto the field at Rutgers in their first game after 9/11.