Virginia head coach Tony Elliott laughs as he answers a question at the ACC Kickoff in Charlotte, N.C., on July 21.

New UVa football coach Tony Elliott (right), his wife Tamika Elliott (left) and sons, A.J. (front left) and Ace, pose for pictures prior to an introductory news conference at the school in December. 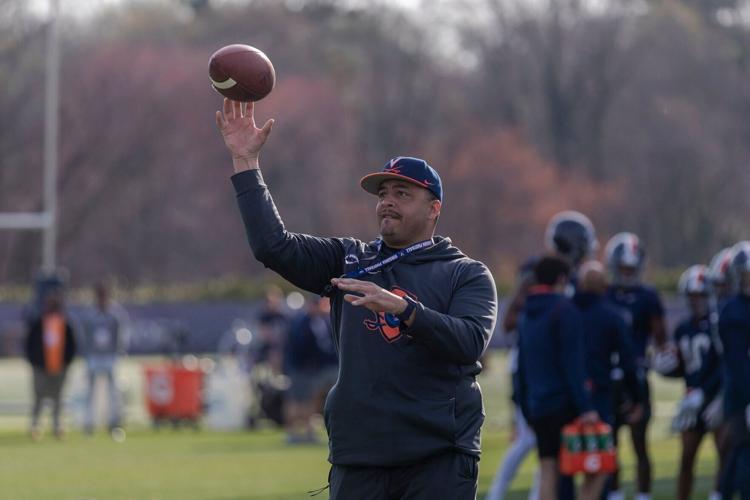 Tony Elliott’s credibility was instant and unassailable. Eleven consecutive seasons of double-digit wins, six straight College Football Playoff appearances and two national championships will do that for a coach.

But respect and admiration come only with time and personal connections. They require more than a résumé and ring collection.

In eight whirlwind months, before a game has been played, this is Elliott’s first victory at Virginia.

A rookie head coach, he has earned respect and admiration. Indeed, he has inspired, just as he did in 11 years as a Clemson assistant, by imparting his powerful life journey to players and staff.

“Once you just learn his story, once you learn who he is as a man, that it’s bigger than football to him — he’s an unbelievable man to work for,” linebacker Nick Jackson said. “He’s shared a lot of his personal story, just so we can gravitate to him emotionally, too. I think that’s important, building a connection with him off the field. He’s a servant leader.”

Elliott first unwrapped his harrowing past early in his Clemson coaching tenure.

Born in Southern California, he spent a portion of his youth homeless with his mother and younger sister as his father served prison time. At age 9, riding with his family to Sunday church, Elliott was fortunate to survive an accident that caused their vehicle to flip several times.

His pregnant mother, Patricia Williams, and her unborn daughter died.

Family and friends embraced Elliott and his 4-year-old sister and, after a series of moves, Elliott settled with an aunt and uncle near Charleston, S.C. His sister, the one who related to the trauma of watching a bloodied parent die, lived with other family 300-plus miles away near Atlanta.

A walk-on receiver, Elliott joined Clemson’s football team in 1999, graduated in 2002 with a degree in industrial engineering and worked briefly for Michelin tire before boarding the coaching train.

“It does kind of give you a new respect for somebody after hearing all that they’ve been through,” receiver Keytaon Thompson said. “He shared it all with us, and we really have a great feel for who he is.”

Media had chronicled Elliott’s path, but UVa players were unaware until Elliott’s arrival and subsequent interactions.

“When you hear that story,” Jackson said, “it puts a lot of things into perspective, perspective on how you view life. He’s resilient. He’s a man of God. His faith is very important to him. That means a lot, just knowing how he’s [transformed] into the role he has now. He’s come a long way ... and you can see how his perspective on life has shaped him into what he is now.”

Faith is rarely linear, and for years after Patricia’s death, Elliott was angry at God, angry at the world. But Bible study taught Elliott that people are defined by the condition of their heart, and as Clemson’s running backs coach and offensive coordinator, he relied on that lesson.

Believing he had more heart than athletic talent, Elliott aspired to “serve the heart, not the talent.” Moreover, he used HEART as an acronym for humility, effort, accountability, respect and toughness.

He brought those principles to Virginia and didn’t sugarcoat his past.

“He’s not ashamed of it,” defensive ends coach Chris Slade said. “He makes no bones about it. It shows his humility [and] allows players to open up to him more, coaches can open up, because he can relate to a lot of situations and shortcomings in family dynamics.”

Those bonds with players and staff are why Elliott coaches.

The wins and championships are fleeting, mere moments. The bonds are for a lifetime.

That’s why he wants his program to be, in the words of quarterbacks coach Taylor Lamb, “transformational and relational” rather than “transactional.”

That’s why a Clemson player texted Elliott out of the blue recently just to say thank you for his guidance.

“So I approach it from that perspective in hopes of them being able to lean upon themselves in times of adversity because they know who they are and they recognize that they can persevere and they have a foundation to stand on.”

Like all of us, Elliott needed others to help him endure. But the pinnacles that he’s reached and the relationships that he’s forged would not have transpired without that self-awareness and confidence.

His life’s trials and imperfections? They aren’t signs of weakness. They’re signs of humanity to which many can relate.

“He has a way of engaging people where he makes you feel you can accomplish a lot of things, and I think our players relate to that.”

Elliott yearns for Virginia football to ascend heights and for the UVa community to revel alongside “because those moments are great. But I also know that the real beauty of it is the journey along the way.”

Teel: UVa's Elliott relies on 'living, breathing examples of what it means to be a Cavalier'

As a Clemson receiver 20-plus years ago, Tony Elliott seldom encountered the program’s history. Oh, he heard about celebrated Tigers such as Perry Tuttle, Rodney Williams and Refrigerator Perry. But he rarely saw them.

We interrupt another summer of realignment angst and NIL confusion with a stirring reminder of the inherent good in college sports.

The Virginia football team begins preseason practice on Wednesday. Here are five players — under the radar right now but could play important roles this season — to monitor during camp.

McFarling: For Hokies and Hoos, 1 more year of Coastal hope

CHARLOTTE, N.C. — Let’s play a little game. I’ll give you quotes from unnamed head coaches at the ACC Football Kickoff regarding the league’s …

CHARLOTTE, N.C. — The boy was holding back.

Six transfers joined the UVa football team earlier this summer and two were on Grounds for spring practice. According to coaches, the staff is pleased with how seamlessly those imports have adapted to their fresh surroundings.

As he trotted from one drill to the next and greeted one player after another, Tony Elliott’s smile revealed his enthusiasm. And from the outset of the season's first practice, he never stopped moving, teaching and encouraging.

McFarling: Tough job at UVa, but Tujague's gotta do it

CHARLOTTESVILLE — So two ditch-diggers are laboring in the summer heat when one turns to the other.

Virginia’s group of running backs is deeper than it was during the spring, and the Cavaliers could get another boost sooner than they expected.

Virginia head coach Tony Elliott laughs as he answers a question at the ACC Kickoff in Charlotte, N.C., on July 21.

New UVa football coach Tony Elliott (right), his wife Tamika Elliott (left) and sons, A.J. (front left) and Ace, pose for pictures prior to an introductory news conference at the school in December.