Virginia’s Sam Hauser (left) shoots against Boston College’s James Karnik during the second half Saturday. Hauser had 17 points and 10 rebounds. 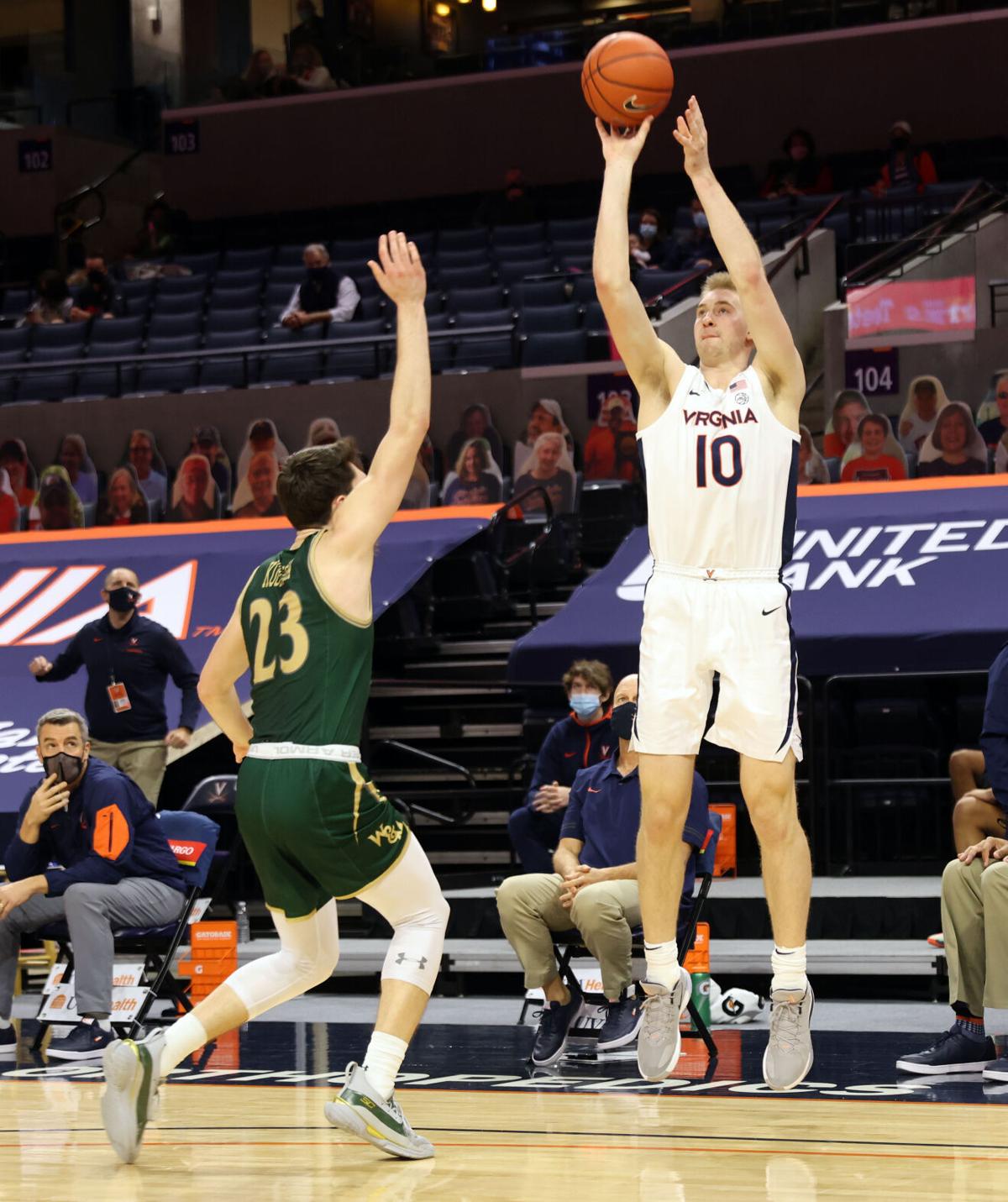 While a double-double is almost commonplace in basketball these days, it’s a statistic that’s not to be overlooked.

When Virginia forward Sam Hauser tallied 17 points and 10 rebounds Saturday in a 61-49 Cavaliers victory at Boston College, he became the first UVa player since Mike Scott to register double-doubles in three consecutive games.

Scott, who is now with the NBA’s Philadelphia 76ers, had double-doubles in five consecutive games for the Cavaliers in 2010-11.

Hauser, who sat out the 2019-20 season after transferring, is leading UVa in both scoring (13.7 points per game) and rebounds per game (7.3) going into Wednesday’s 4:30 p.m. tipoff against visiting Notre Dame.

“He just launches himself. He’s not a huge jumper, but he has a nose for the ball. He’s continuous in his pursuit, There was a play in the Boston College game where he had two offensive rebounds of his own shot.”

Hauser and point guard Kihei Clark lead the team in minutes played with 296 apiece after nine games. Hauser leads the team in another category — 3-point field-goal attempts — although he’s shooting just 34% from beyond the arc.

“I like his versatility and he’s a team-first guy. He’s always saying, ‘What can I do to help the team?’ Sometimes you have to urge him, ‘Hey be aggressive. Be assertive.’ Joe Harris was like that.”

Harris, the MVP of the ACC Tournament as a UVa senior in 2013-2014, was one of the top shooters to come through UVa and won the NBA 3-point championship in 2016. He signed a $75-million contract with the Brooklyn Nets earlier this year.

As a sophomore at Marquette, Hauser shot 48.7% on 3-pointers.

“He’s probably being marked pretty good and there’s some inexperience [among UVa players] around him,” Bennett said. “He’s getting quality looks. He doesn’t force much.”

Hauser hasn’t been stressed out by a dropoff in his 3-point percentage.

“The three-ball wasn’t falling,” he said after the Cavaliers’ most recent home game, when he was 1-for-6 from beyond the arc in a 70-61 win over Wake Forest. “It hasn’t been falling all year, but that’s when I had to take advantage of the rest of my game.

“I’m not just a shooter. I can do a lot of things. Sometimes other guys get open by me being aggressive. I think I’ve done a good job with that over the last couple games.”

As if his other numbers aren’t impressive enough, Hauser is third on the team in assists, with 18, trailing only a pair of point guards, Clark (30) and Reece Beekman (20).

Notre Dame at No. 18 Virginia

Notre Dame at No. 18 Virginia

Notes: The Cavaliers have won the past five games in the series and are 15-2 all-time against the Irish, including 15-1 in the past 16 games. … Kihei Clark had 19 points to lead Virginia to a 66-57 victory at Notre Dame on Dec. 30. ... Nate Laszewski had 28 points for Notre Dame in that game and Jawan Durham had 19 … The rest of the Notre Dame team was 3-for-23 from the field. … Sam Hauser had the first of three straight double-doubles (points and rebounds) for UVa in that game. .... Casey Morsell, who started that game for UVa, has missed the past two games.

Virginia’s Sam Hauser (left) shoots against Boston College’s James Karnik during the second half Saturday. Hauser had 17 points and 10 rebounds.