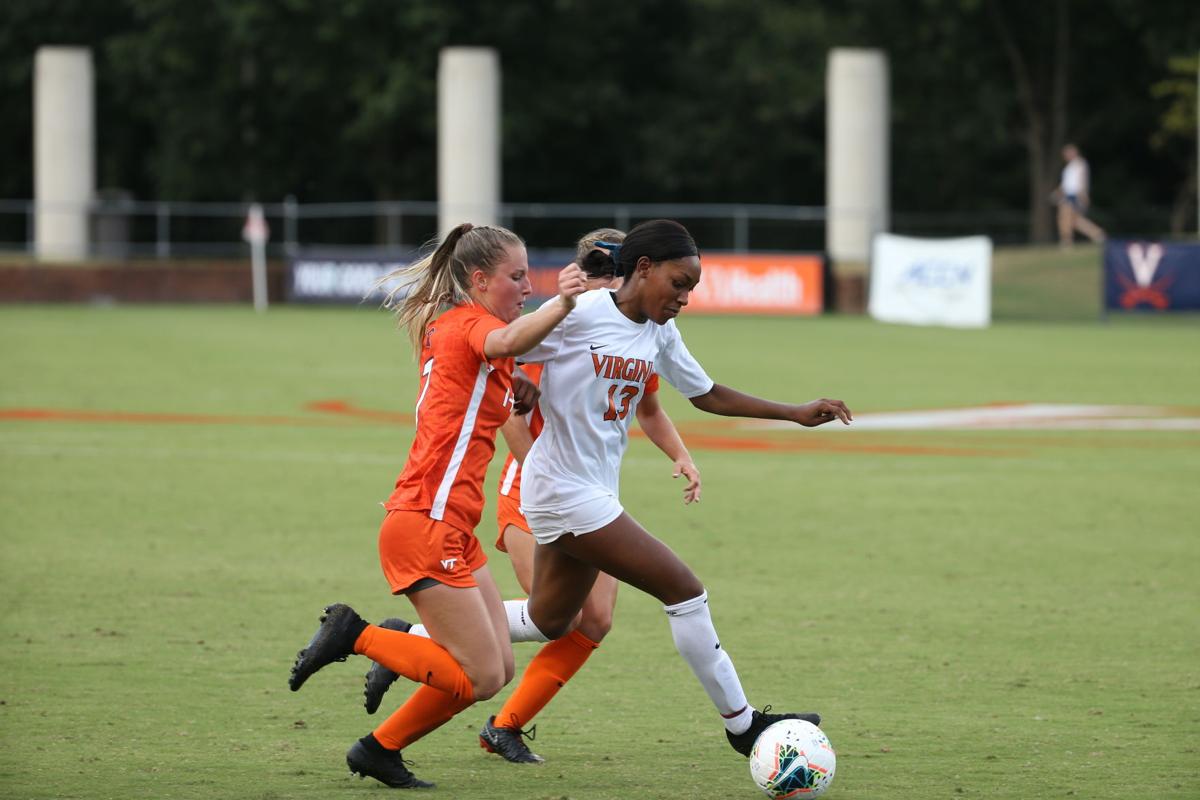 Rebecca Jarrett (right) of the Virginia women's soccer team is shown in a win over Virginia Tech last fall. It remains to be seen whether the Hokies and Cavaliers will play soccer this fall. 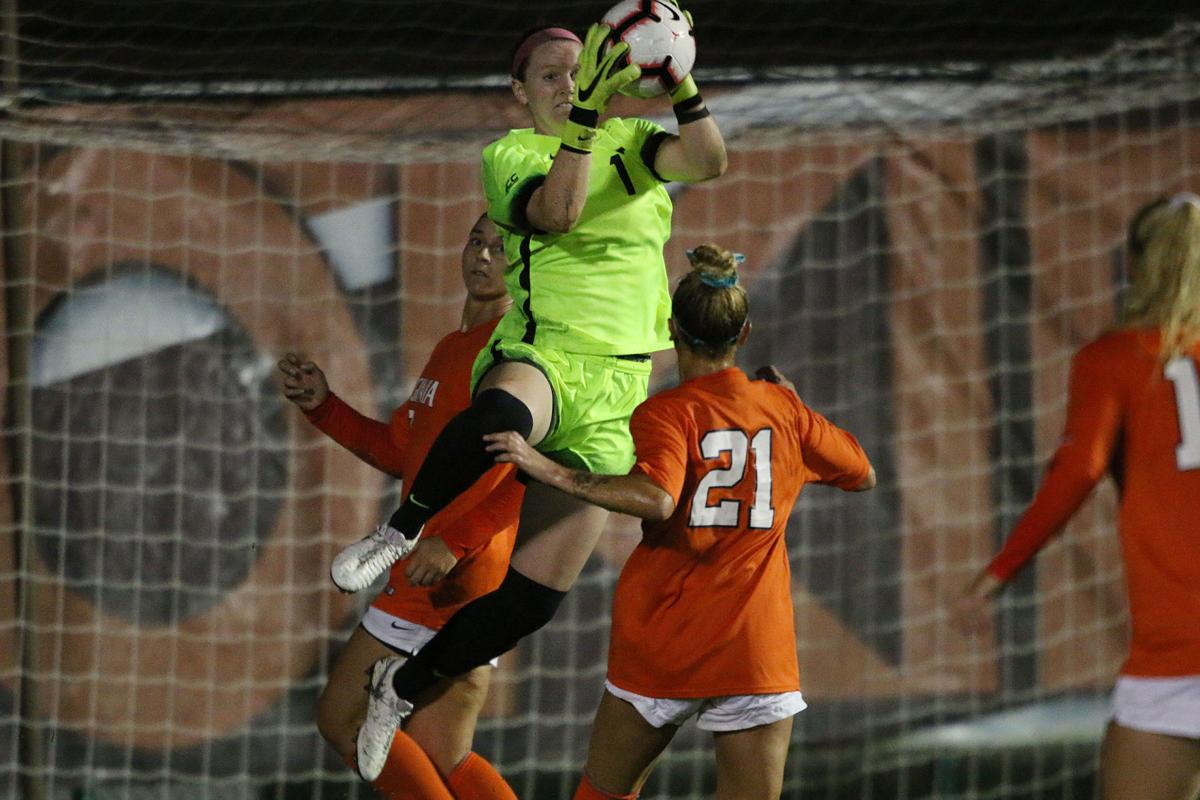 Virginia Tech goalkeeper Mandy McGlynn makes a save in a win over UVa in 2018. It’s not clear if the Hokies and Cavaliers will play soccer this fall. 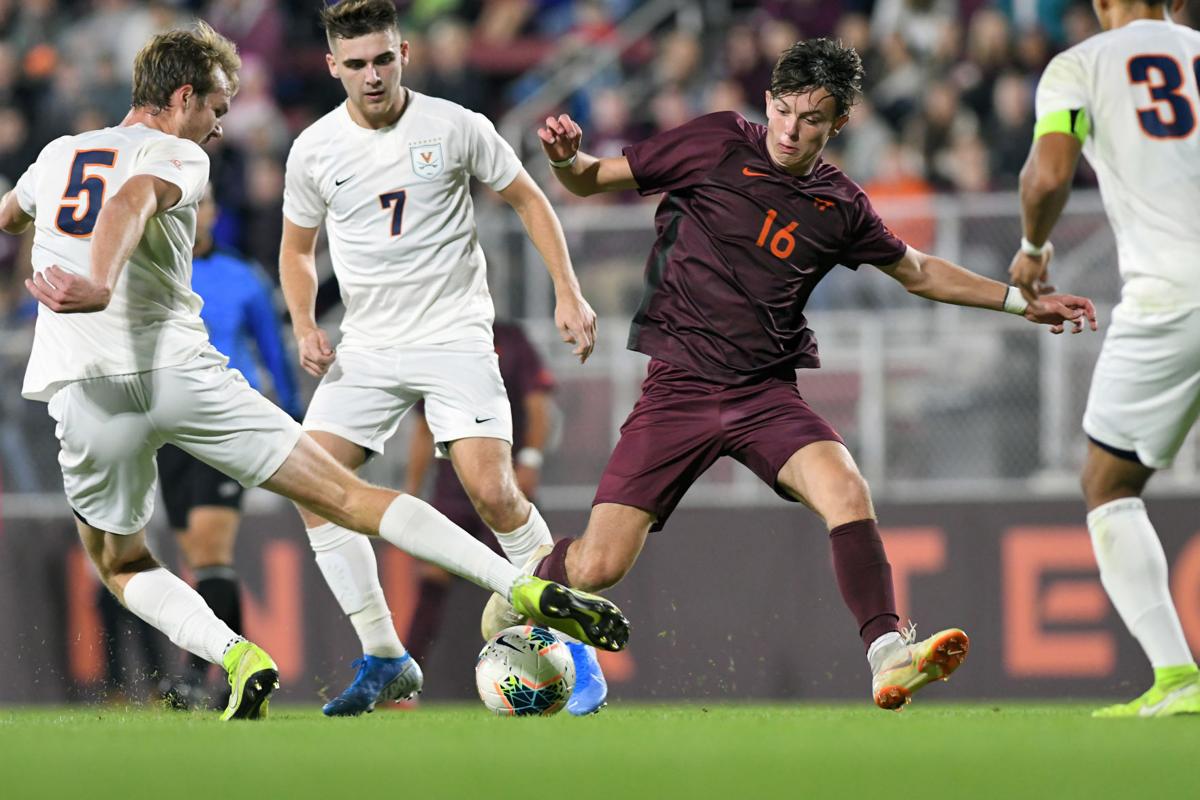 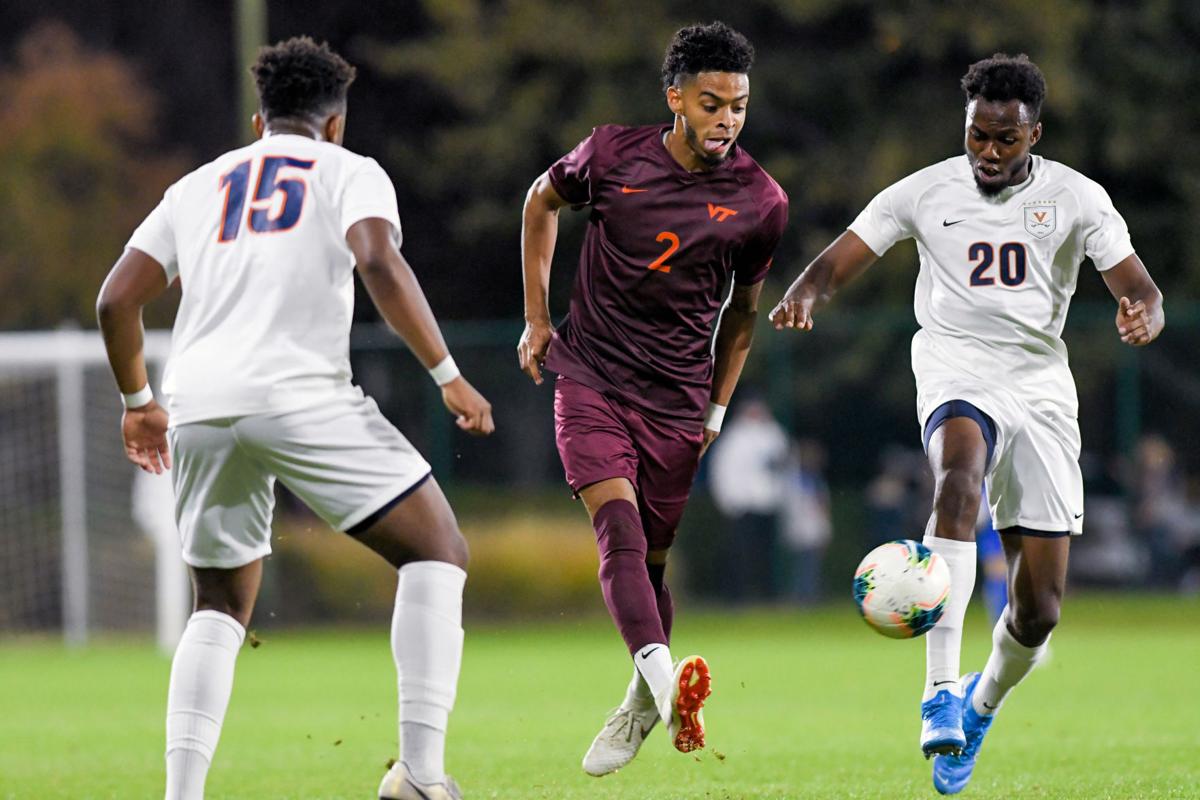 Then-Virginia Tech player Will Mejia plays against Philip Horton (15) and Cabrel Happi Kamseu (20) of Virginia in a loss to the Cavaliers last fall. It remains to be seen if the Hokies and Cavs will play soccer this fall. 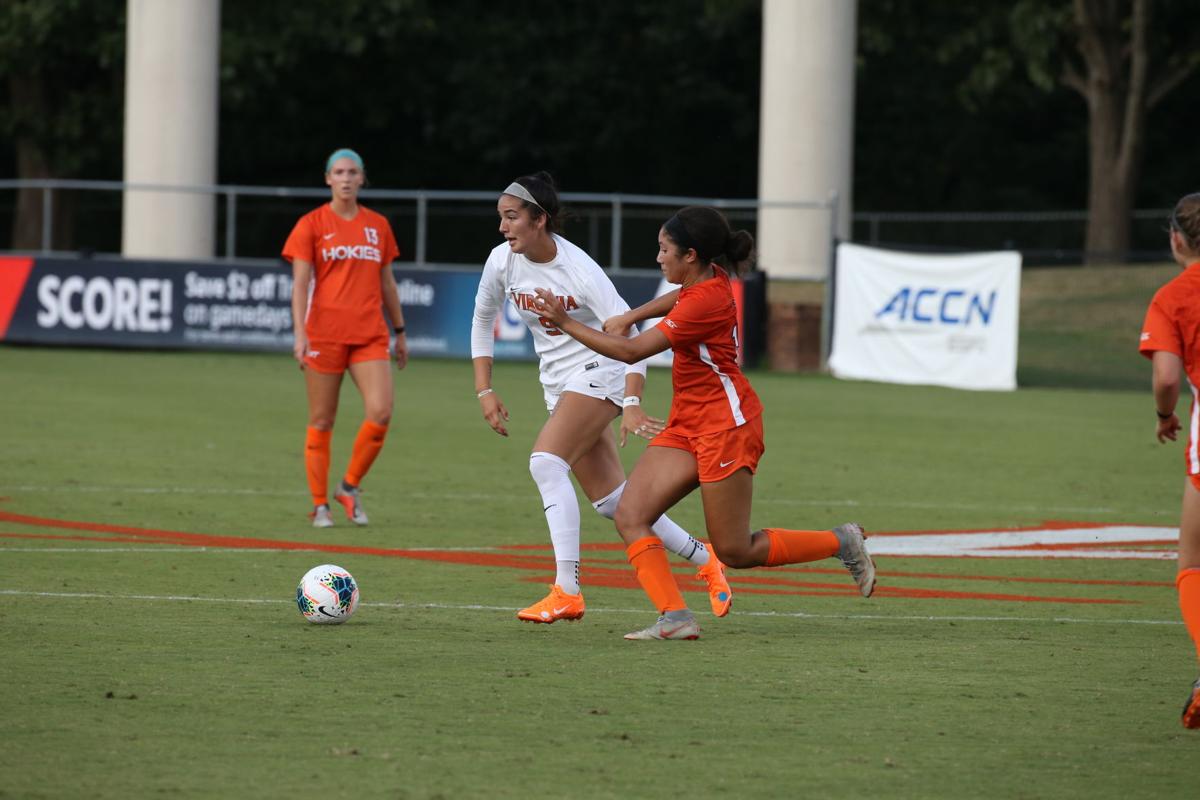 Diana Ordonez (center) of the Virginia women's soccer team is shown in a win over Virginia Tech last fall. It remains to be seen if the Hokies and Cavaliers will play soccer this fall.

The ACC has been planning on having a fall season for its soccer, volleyball, field hockey and cross-country teams.

But that season could still end up moving to the spring.

“It’s still very much up in the air,” Virginia women’s soccer coach Steve Swanson said Tuesday in a phone interview. “We thought we’d have a little more clarity at this point.”

With so many leagues having postponed their fall sports season to next spring because of the coronavirus pandemic, NCAA President Mark Emmert announced last week that the NCAA Division I fall sports championships will not be held this fall.

“We want to be safe. That’s the most important thing. … The next thing would be, we [at UVa] would want to compete in championships. That’s what we do,” said Swanson, whose team made its 26th straight NCAA appearance last year. “If we can potentially do that in the spring, we certainly want to explore that option. But we also realize there’s a lot of questions to be answered.

“I certainly wouldn’t want to do something in the fall that would jeopardize that opportunity to potentially play in the championship in the spring.”

If the Division I Board of Directors follows suit and cancels the fall sports championships for the school year, the ACC will likely go ahead with its plan to have a fall sports season. After all, it does not matter when the regular season is held if there won’t be any NCAA playoffs.

But if the NCAA fall sports championships are moved to next spring, the ACC could postpone its fall Olympic sports season to the spring as well.

“It’s kind of hard to justify playing 12 games [in the fall] when you can play 18 or 20 and then for a national championship [next spring], which is what this program should be competing for every year,” said UVa men’s soccer coach George Gelnovatch, whose team made the NCAA final last year.

The NCAA might permit ACC teams to have their regular season in the fall and still be eligible for the NCAAs in the spring. But the ACC might still want to move its regular season to next spring to avoid split seasons.

“If the NCAA made an announcement that there’s going to be a spring championship for the fall sports, I think the ACC would say, ‘OK, we’re going to do our ACC championship in some version in the spring,’ ” Gelnovatch said.

Even if the NCAA wants to move its fall tournaments to the spring, the pandemic could still keep that from happening. So perhaps the ACC will stick with its fall regular season regardless.

“No one’s crystal ball really works to understand what’s going to be in place in the spring,” said Wake Forest men’s soccer coach Bobby Muuss, whose team made the NCAA semifinals last year. “So if we have an opportunity to compete right now and push forward, … that’s ultimately our goal [at Wake].

“My program wants to win the national championship. We also want to compete in the best soccer conference in the country, play the best competition as we possibly can, and that’s in the ACC. … Right now we have an opportunity to compete for an ACC championship.

“Even if they say there’s a spring championship, right now how do we know we can accomplish that?”

Of course, the ACC is planning to also play football this fall. It would look better for the ACC if other ACC sports were in action this fall as well.

“Olympic sports are a little bit of a pawn in this mess,” Gelnovatch said. “The optics of just playing football and not the other sports is probably pretty bad.

“Football, however, for their [College Football Playoff] national championship, don’t need the NCAA. For all the other sports, they do. I feel like we’re a little bit caught in the middle — not necessarily in a bad way. In one sense, it’s probably one of the reasons we’re still practicing and getting ready for the season right now. But on the other hand, some people would argue fall sports shouldn’t be playing.”

Gelnovatch is optimistic the ACC would put optics aside and let the fall Olympic teams move to the spring if the NCAAs are held in the spring.

The UVa men’s and women’s soccer teams began preseason practice this month after reporting to campus last month. Gelnovatch and Swanson each said none of his players have tested positive for COVID-19.

There is so much uncertainty about the fall season that neither Virginia Tech nor UVa has announced the schedules for its fall Olympic teams yet.

One thing is certain: there will not be NCAA championships this fall.

The NCAA Board of Governors announced on Aug. 5 that if more than 50% of the teams in a sport in a given division choose not to play the regular season this fall, that particular NCAA tournament cannot be held this fall.

For months, Kevin and DeeDee Clifford had been looking forward to a 27th anniversary tour that would culminate in a trip to Virginia's footbal…

Rebecca Jarrett (right) of the Virginia women's soccer team is shown in a win over Virginia Tech last fall. It remains to be seen whether the Hokies and Cavaliers will play soccer this fall.

Virginia Tech goalkeeper Mandy McGlynn makes a save in a win over UVa in 2018. It’s not clear if the Hokies and Cavaliers will play soccer this fall.

Then-Virginia Tech player Will Mejia plays against Philip Horton (15) and Cabrel Happi Kamseu (20) of Virginia in a loss to the Cavaliers last fall. It remains to be seen if the Hokies and Cavs will play soccer this fall.

Diana Ordonez (center) of the Virginia women's soccer team is shown in a win over Virginia Tech last fall. It remains to be seen if the Hokies and Cavaliers will play soccer this fall.