When Tiki Barber played football for Cave Spring High School, Doug Doughty was sometimes there to cover it.

When Barber moved on to become a running back for the University of Virginia, Doughty was always there to cover it.

When Barber played his final game before retiring from the NFL, Doughty made sure to be there to cover that, too.

Now it's Doughty's turn to retire.

Doughty, who has been a sports writer for The Roanoke Times since 1974, will be retiring at month's end.

"To me, he's a legend," Barber, 45, said in a phone interview. "He made us and the things that we were doing feel important, and told our stories to a lot of the people we grew up with."

Doughty, 68, was hired by The Roanoke Times in July 1974, after graduating from UVa.

He is the dean of the UVa beat writers. He has been on that beat for The Roanoke Times since 1978, after having covered the Cavaliers periodically in his first four years at the newspaper.

Doughty has been at UVa men's basketball games to cover everything from the Cavaliers winning the 1976 ACC Tournament to the Ralph Sampson era to UVa claiming the 2019 NCAA championship.

When fielding Doughty's questions at press conferences, Bennett has been impressed with Doughty's basketball insight.

"He's good at what he does, without a doubt," Bennett said. "He understands the game.

"Doug was a good voice for all of us in the Timesland area. I remember waking up after games, wanting to read whatever Doug [wrote]," said former Cave Spring, UVa and NFL defensive back Ronde Barber, who is Tiki's twin. "The things that used to show up in The Roanoke Times that Doug had written, they were like gospel to all of us. It's the only thing we knew. … It's not like we had the internet or social media."

"You're a junior in high school and you're getting covered by one of the top sports guys in the state, that's a big deal," Tiki Barber said. "He made us feel special."

After covering the Barbers when they were at Cave Spring in the early 1990s, Doughty continued to do so when they played for the late George Welsh at UVa.

"I was connected with Doug when I got to college, [from] him being around during the high school days. He was a guy I trusted because of it," said Ronde Barber, who is a finalist for the Pro Football Hall of Fame. "A lot of reporters out there, you don't really trust. You learn that as you get older. But I had trust in Doug from the beginning.

"He's a call that I've always taken; there's plenty of people that call and I'm just like, 'Well, I'm not calling that dude back.’

"His opinion matters. It truly matters what he says."

Doughty was direct but still easy to talk to, said Tiki Barber.

"He has an easy way of conversating," the former New York Giants star said. "He's not aggressive, so you never feel threatened, even if he's asking you about, I don't know, fumbling."

Doughty's conversations with the twins have evolved, now that they are grown men with families of their own.

Doughty has covered UVa football for decades, and even was the co-author of a book on the UVa-Virginia Tech football rivalry. He witnessed memorable football wins over Tech, Florida State and Miami during his career.

He was named the commonwealth's sports writer of the year three times by the National Sports Media Association.

"Doug was a very serious-minded, purposeful questioner and writer," former UVa football coach Al Groh said. "He wanted to get answers and information so that he could knowledgeably write about what was on his mind. … He was a real professional.

"They were always probing questions; they were never silly. Some questions you get are really silly. … Whether it was postgame or during the week, when he came into a session he was always prepared for it with certain things he wanted to find out more about."

Doughty, a music buff, and Groh did not only talk about wins and losses.

"We used to have a little bit of banter once in awhile about who our favorite musical artists were," Groh said. "You could say Doug and I knew more about, say, Van Halen and Hall & Oates than we did about Lil Wayne."

Doughty was inducted into the state's sports hall of fame in 2018.

"He was fair," said former UVa football assistant and head coach Mike London, now the coach at William and Mary. "He asks good questions. Sometimes you would want to hear them and sometimes you didn't, but at the same time you knew that he had a job to do.

"I don't think Doug ever took a personal swipe."

"Doug was good about writing about the players and things they did off the field," London said. "He made allowances for a humanistic approach."

Doughty did not only write about UVa football and men's basketball. Plenty of other UVa teams got his attention, too.

Ryan used to have dinner with Doughty and other reporters in the depths of University Hall before UVa men's basketball games.

As is the case with Groh, London and others, Doughty remained on good terms with Ryan after her UVa reign ended.

Doughty is a competitive swimmer, and Ryan teases him about that.

"I always found him to be upstanding, honest."

Doughty has covered the UVa baseball team in the College World Series — although not the year the Cavaliers won the 2015 NCAA crown, because Doughty was instead in the stands, as the proud father of then-UVa pitcher Matt Doughty.

One weekend in December 1994, he covered UVa winning a men's soccer semifinal in North Carolina on a Friday, flew to Houston to cover the UVa men's basketball team playing Rice on a Saturday, then flew back to cover the soccer team winning the national crown on a Sunday.

"He could appreciate a well-played game, those kind of athletic moments, but at the same time, in situations where we … didn't play that well, you knew you were going to face real questioning from Doug. He didn't soft-pedal things."

Lacrosse is one of the sports for which Doughty has an affinity.

"You treated his questions … respectfully. You knew you were talking to someone who knew what he was talking about," Starsia said.

Doughty has not reported only about UVa for The Roanoke Times.

He has written a weekly college notebook since the 1980s.

He also does annual Christmastime rankings of the state's top high school football recruits. He has done so since the 1980s, back before there were recruiting websites.

He has not only covered local golf tournaments but used to cover the PGA Tour as well. He was inducted into the Roanoke Valley Golf Hall of Fame last year.

But despite a time-consuming job, Doughty always made time for his family.

Doughty and his wife of 41 years, Beth, have four children.

"He was always able to make it to a swim meet or make it to a Little League baseball game," daughter Allison Doughty said.

When the kids were younger, they would sometimes go to UVa games with their dad so they could spend that two-hour drive to Charlottesville with him.

"Even though he worked weird hours, on weekends, it was always a family affair," Allison Doughty said.

After the children grew up and moved away, they would call him during his late-night drives home from Charlottesville.

"That was our time to catch up," Allison Doughty said.

Allison Doughty is now the director of events and hospitality services for the College Football Playoff, while her sister, Caroline, is a technology integration specialist for an Alexandria elementary school. Michael Doughty is the vice president for a company in Charlotte, while Matt Doughty is now a Seattle Mariners scouting analyst.

Allison and Caroline Doughty used to be volunteer assistants in the UVa football office when they were students at Virginia, so Groh and London gained insight into what Doug Doughty was like when he did not have a notebook in his hand.

"I got to know a lot more about his family, … his commitment as a parent to his children," Groh said. "I appreciated that he had that value system."

"Those Doughty daughters — first-class, great individuals," London said. "Probably the mom had a lot to do with it, but I know they got some of those Doug Doughty qualities as well."

Allison Doughty used to work for the ACC before moving to Texas for the College Football Playoff job, so Bennett got to know her as well.

"You watch how a daughter looks at her dad. I watched them interact. That always impressed me because you could see how much he loved his daughter and just how much she cared for him," Bennett said.

Bennett has also gotten to know Doug Doughty over the years, through conversations about golf and other topics.

Doughty will have more time for his family in retirement (Beth Doughty recently retired as executive director of the Roanoke Regional Partnership, an economic development organization), but his bylines will be missed by readers of The Roanoke Times.

The people Doughty covered appreciated him, too.

Family: he and wife, Beth, have four children

Senior guard Tomas Woldetensae, who helped spark Virginia basketball in the second half of the 2019-20 season, won’t return for an extra year of eligibility. 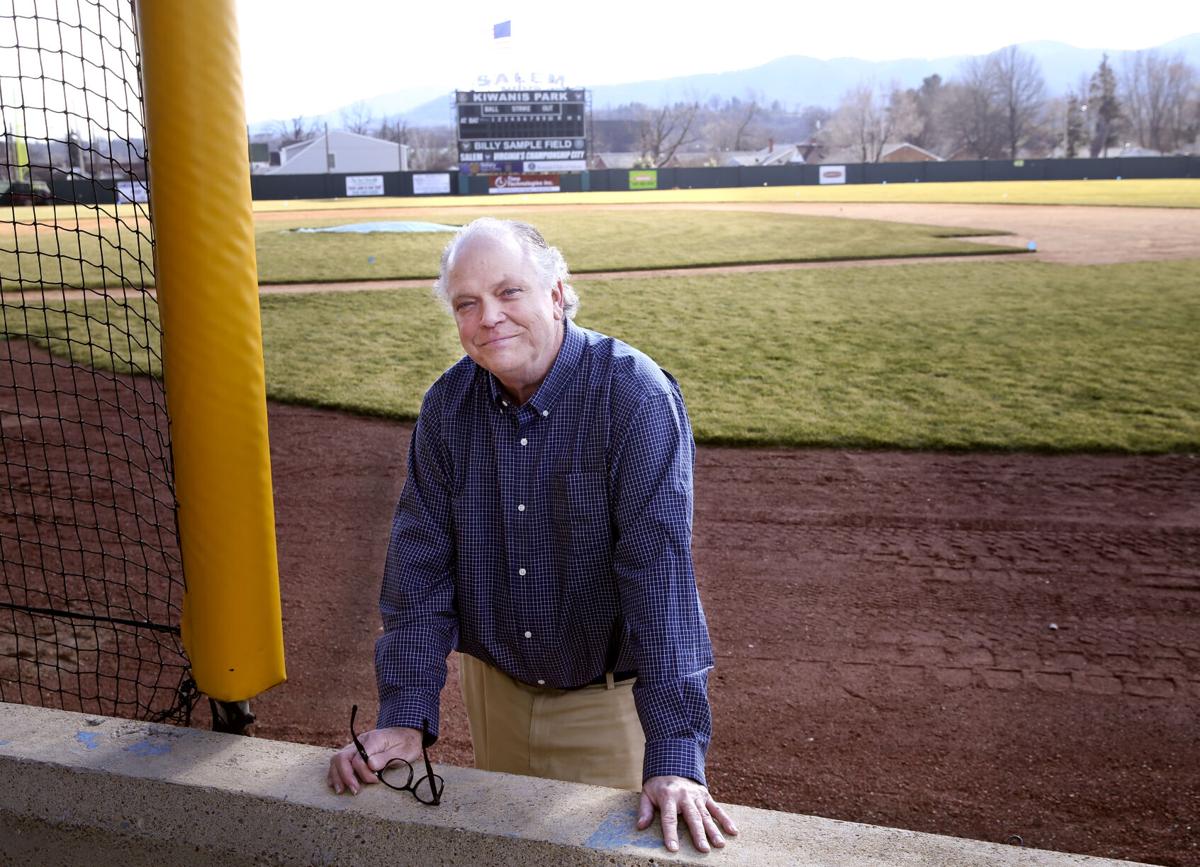 Doug Doughty is retiring after having been a sports reporter at The Roanoke Times since 1974. He is pictured Thursday at Billy Sample Field at Kiwanis Park, where he covered Salem minor-league baseball games his first summer at the newspaper. 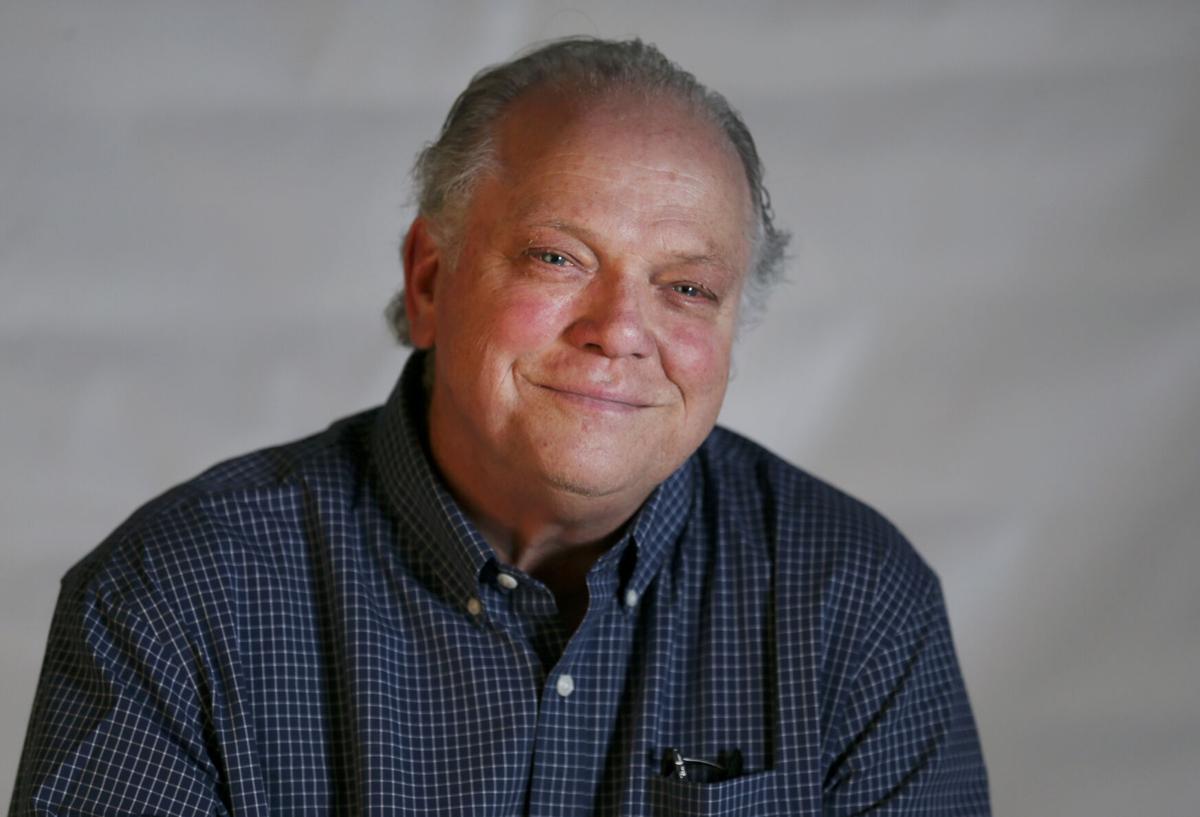 Doug Doughty is retiring after having been a sports reporter at The Roanoke Times since 1974. He has covered UVa sports for the newspaper since the 1970s. 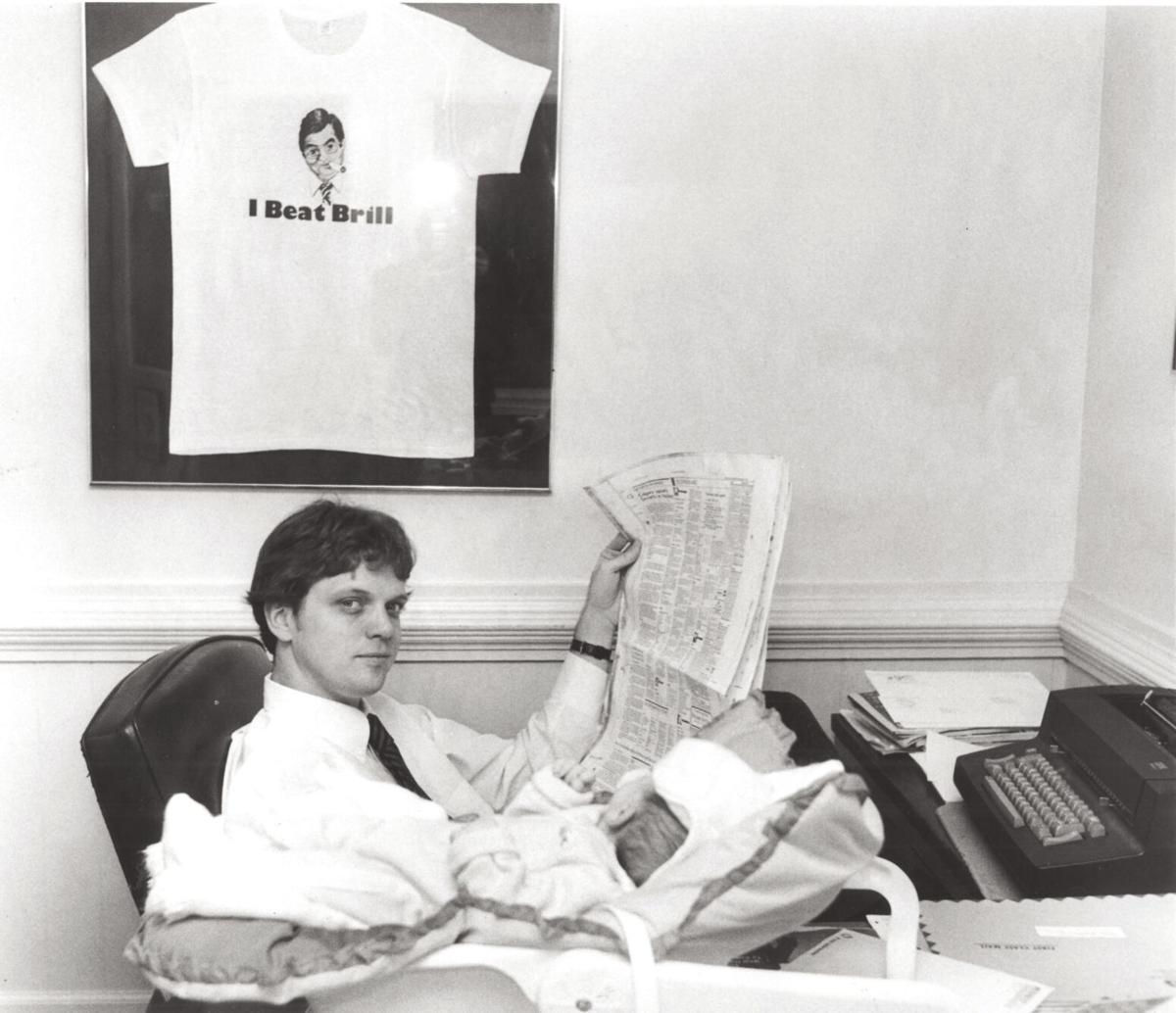 Doug Doughty in his office in a 1983 file photo, with his infant daughter Allison watching him from the desk. Allison Doughty now works as the director of events and hospitality services for the College Football Playoff. 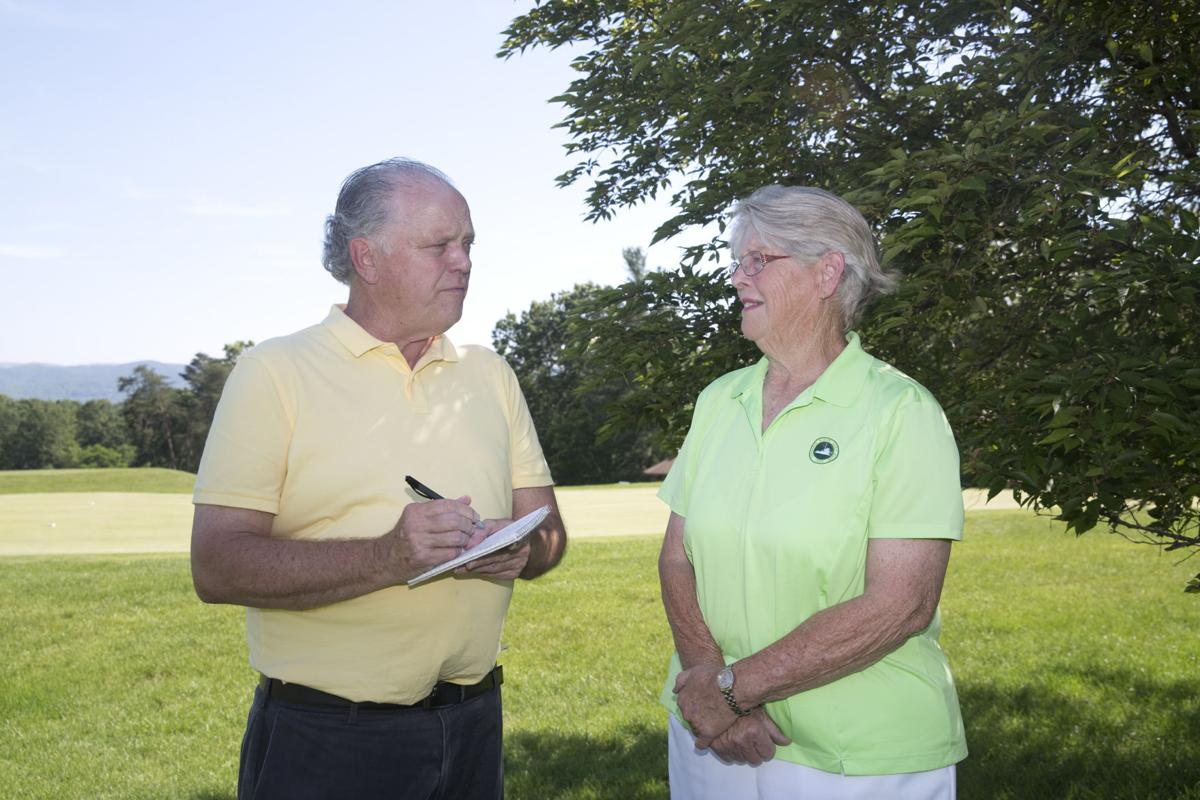 Doug Doughty, shown interviewing local golfer Marilyn Bussey last year, is a member of both the state's sports hall of fame and the Roanoke Valley Golf Hall of Fame. 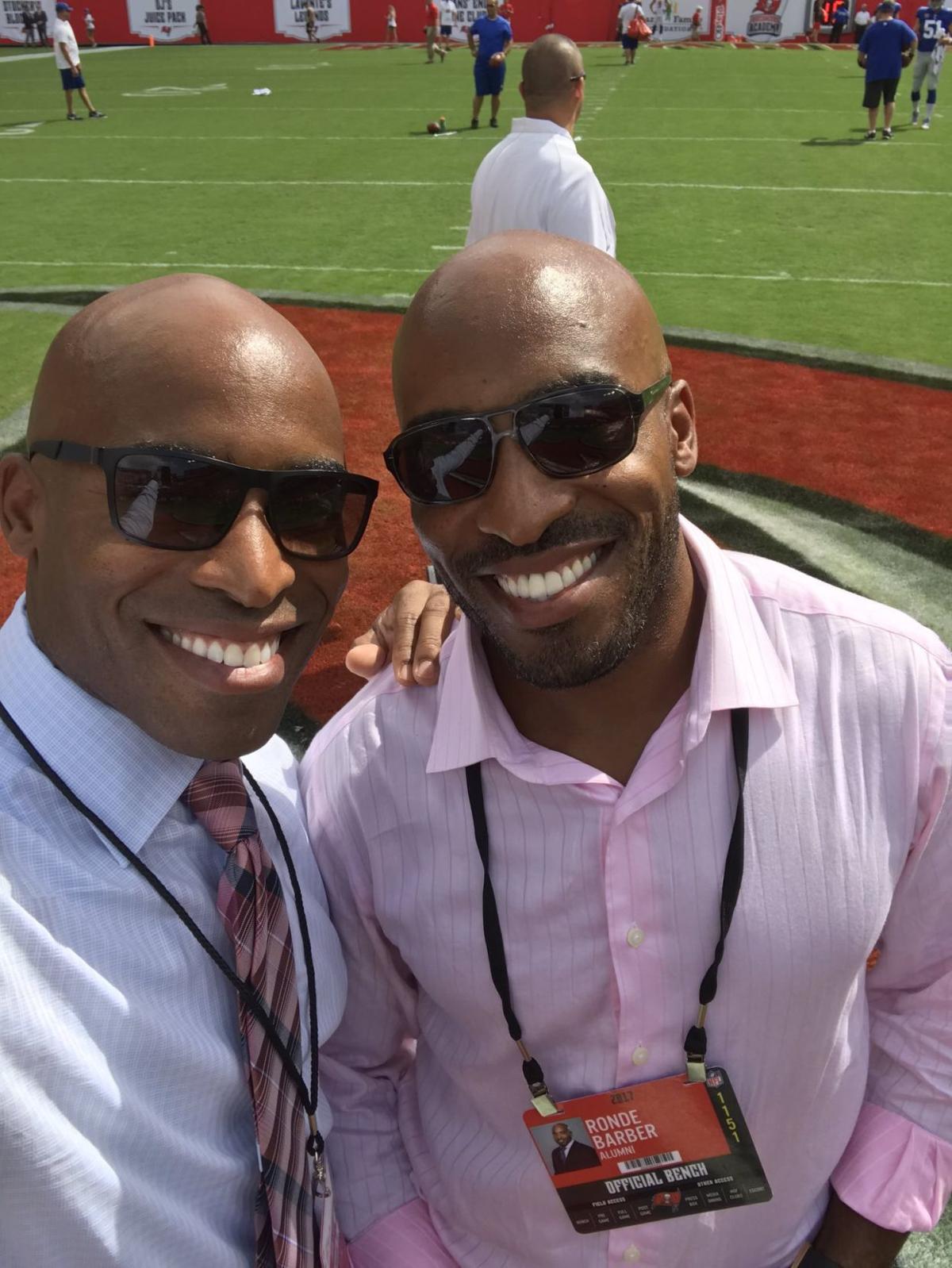 Former Cave Spring High School, UVa and NFL standouts Tiki (left) and Ronde Barber (right) have been covered by Doug Doughty since they were Cave Spring players in the early 1990s.