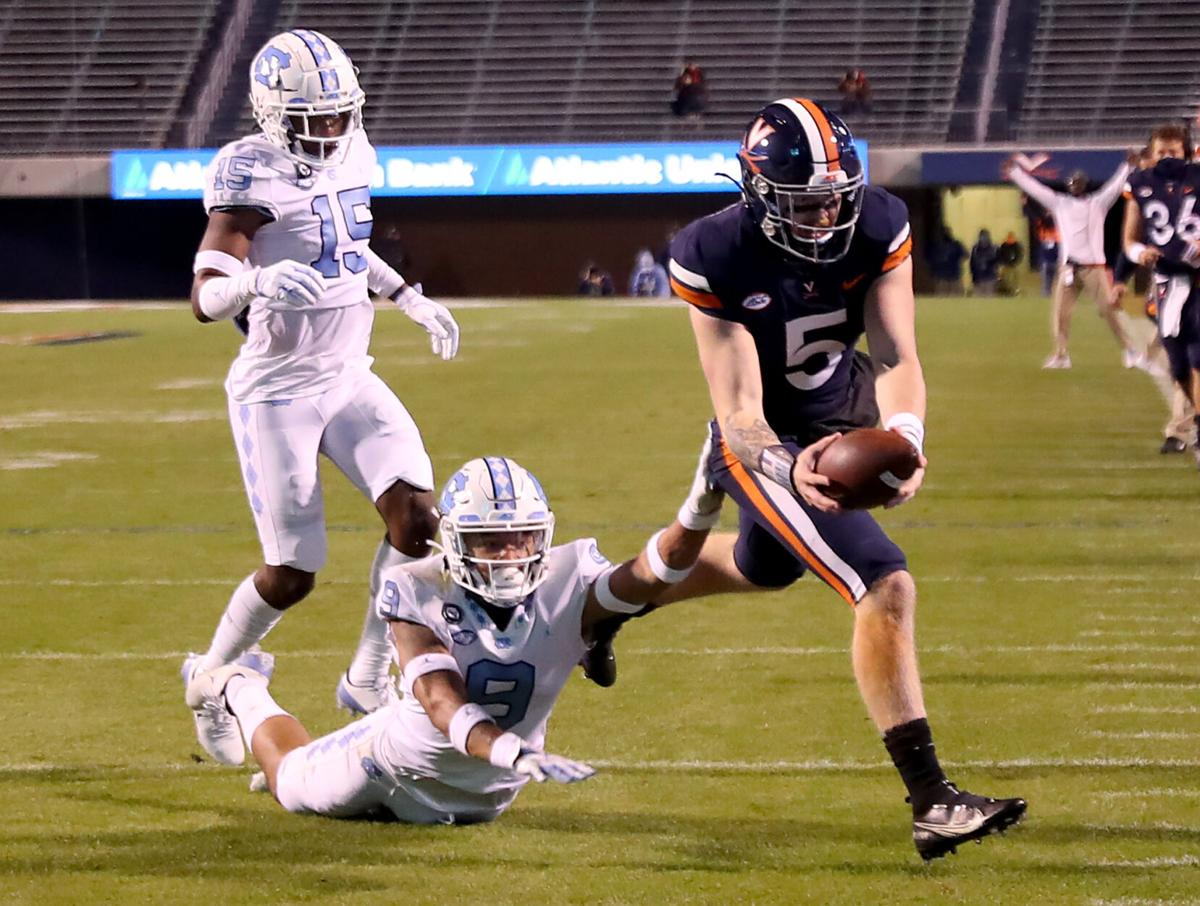 Virginia quarterback Brennan Armstrong (from right) reaches for a touchdown next to North Carolina defensive backs Cam’Ron Kelly and DeAndre Hollins on Saturday in Charlottesville. 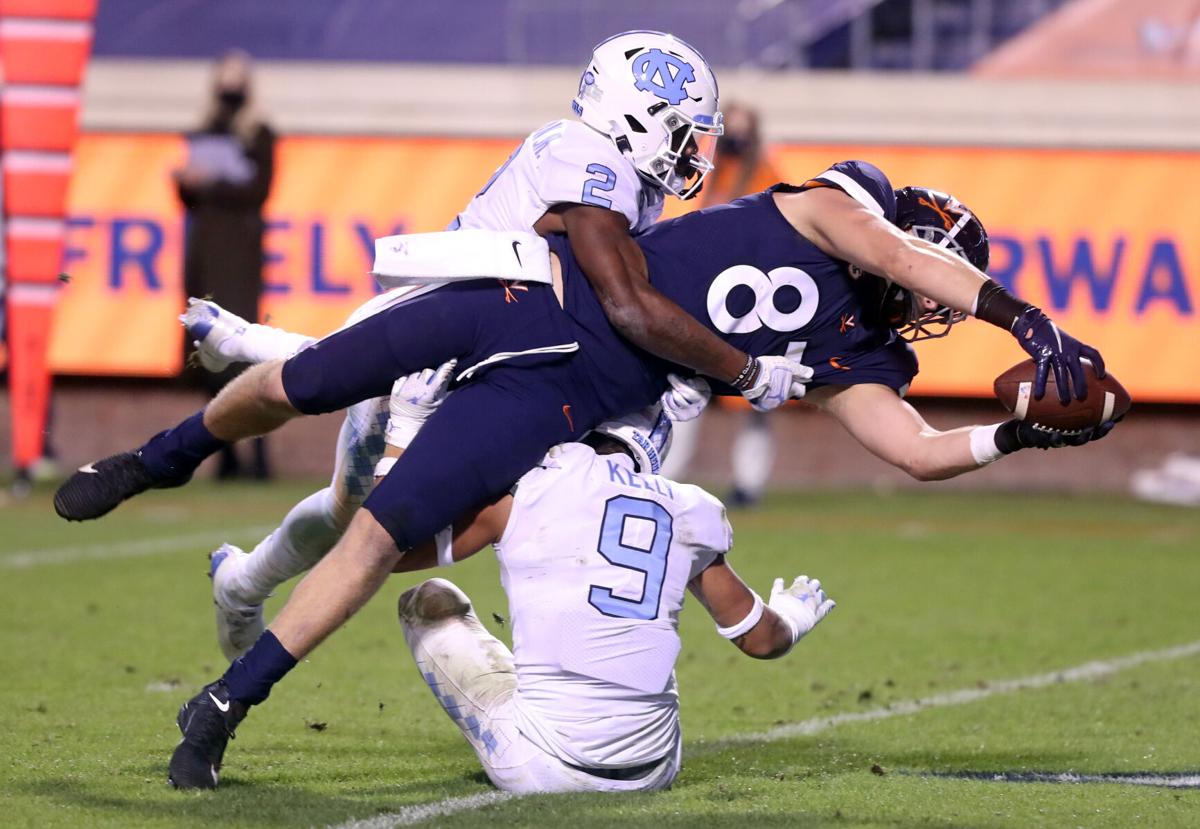 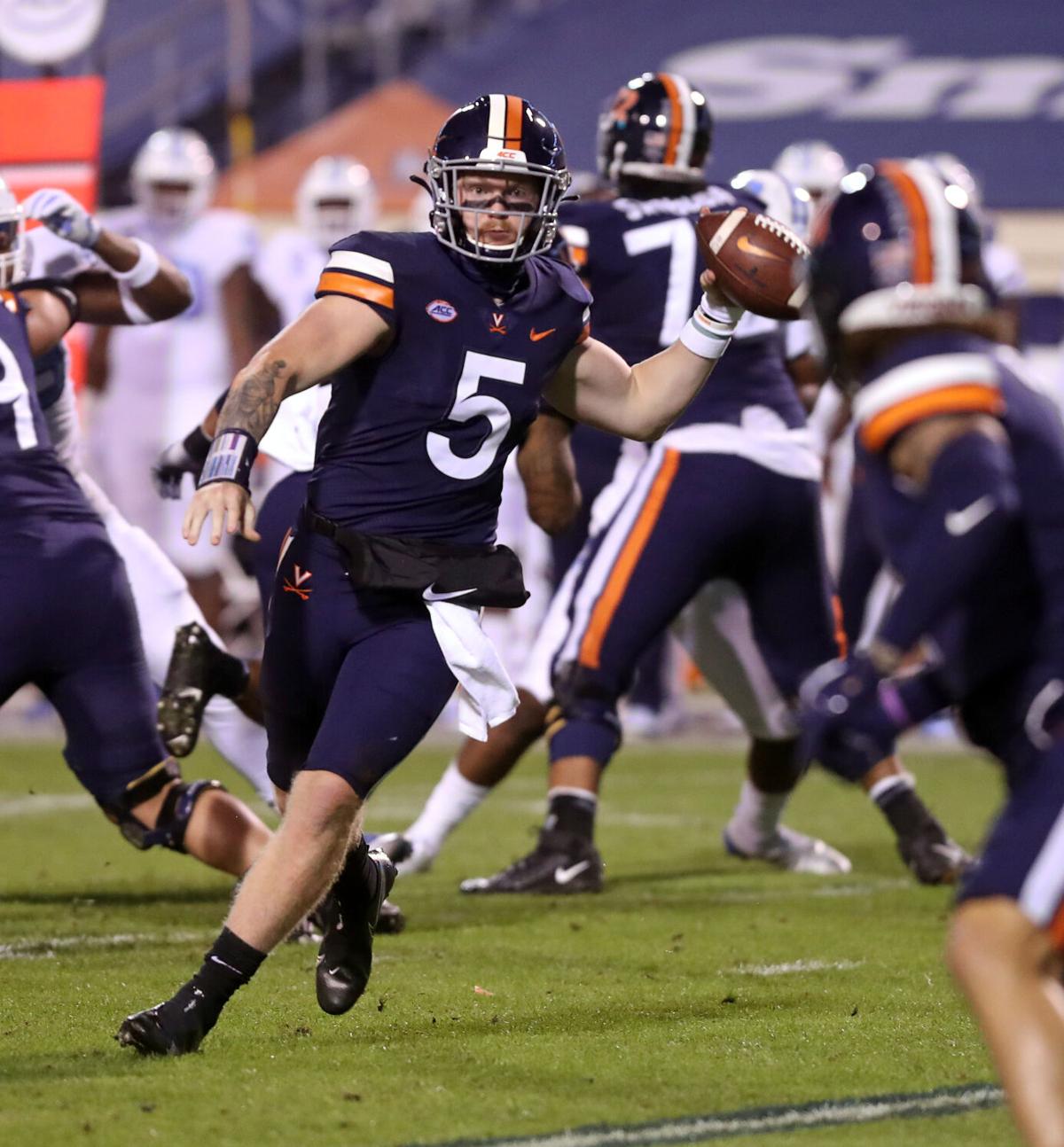 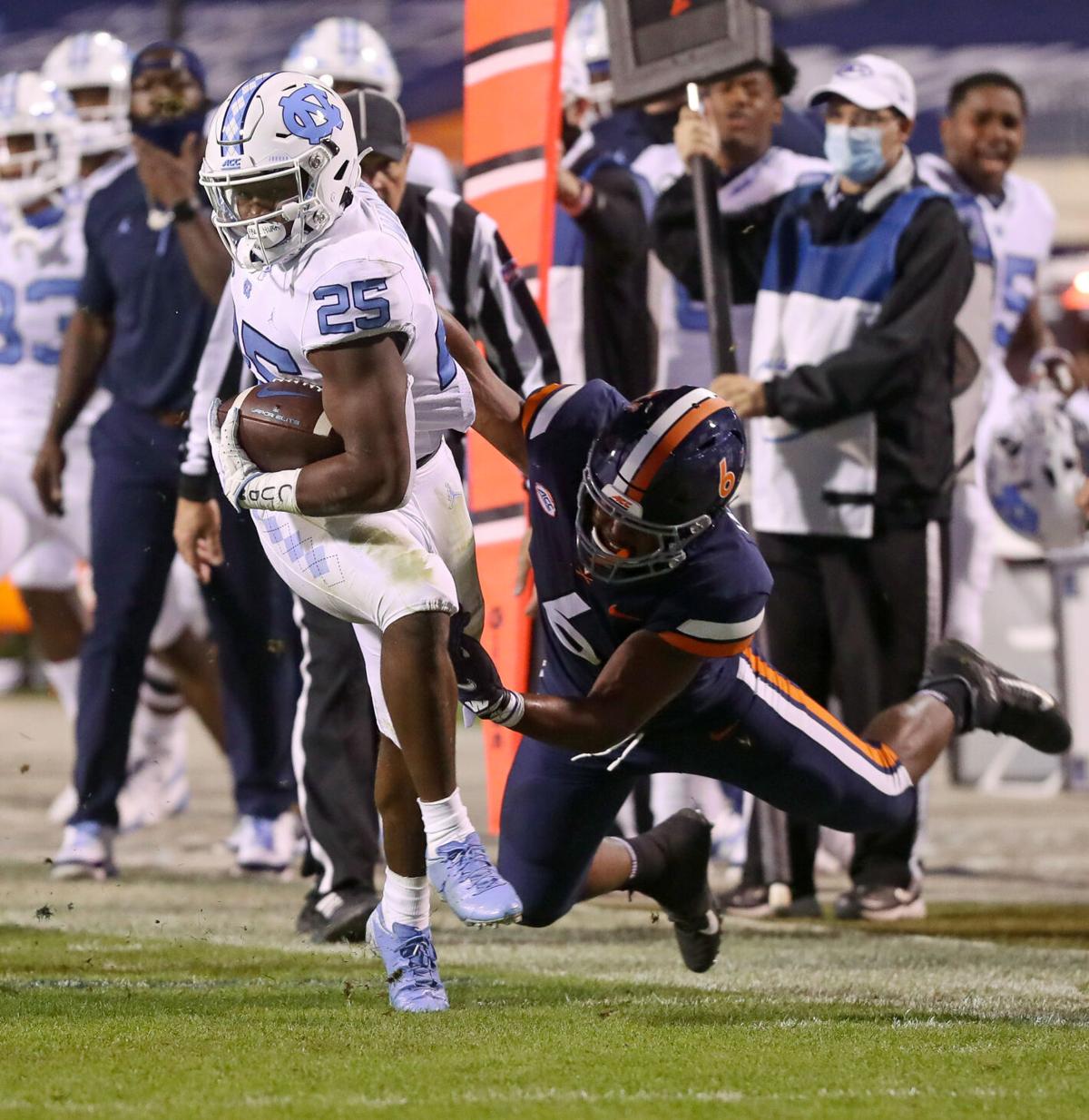 Instead, Brennan Armstrong and UVa rose to the occasion, not only taking part in a Saturday night shootout in Scott Stadium but also outdueling Howell and the 15th-ranked Tar Heels.

Flipping the script on its recent losses, Virginia (2-4 overall and ACC) topped the Tar Heels 44-41 thanks to big plays of its own and untimely errors by UNC (4-2 overall and ACC).

“I’m so happy that they got a chance to have something tangible that comes out of all the work they’ve put in and how fitting that it took really every phase, every way possible to scratch out a victory,” UVa head coach Bronco Mendenhall said. “I couldn’t be more pleased.”

For the sixth consecutive game, Virginia’s opponent scored the first points of the contest. UNC needed just four plays to drive 75 yards for a touchdown. After a pair of short runs, UVa linebacker Nick Jackson burst through for a potential sack. Howell avoided the tackle, completing a pass for a first down.

One play later, he launched a 54-yard touchdown pass down the left sideline. Dyami Brown tracked the ball under the lights, corralling it and scoring. Just 85 seconds into the game, UNC led 7-0.

Stunningly, that marked an improvement from UVa’s 7-0 deficit last week against Miami. The Hurricanes needed just two plays and 28 seconds to take a 7-0 lead.

Armstrong led a 10-play, 75-yard touchdown drive that ended when he burst through the offensive line for a 23-yard scramble for a touchdown. He raced toward the left corner of the end zone, diving at the pylon and scoring.

The touchdown set off a scoring frenzy.

A 51-yard UNC field goal from Grayson Atkins was answered by a 71-yard touchdown toss from Armstrong to running back Shane Simpson. The Towson transfer ran a swing route out of the backfield, catching it as the UNC defense moved out of position. Simpson outran everyone to the left corner of the end zone.

“Once I got the ball, I made sure nobody was able to catch me, even though I was running out of gas toward the end,” Simpson laughed.

For the first time all season, Virginia ended the first quarter with a lead. It held a 13-10 advantage after 15 minutes.

UNC answered with a 30-yard field goal from Atkins.

After the Tar Heels forced the first punt of the game, Howell ripped a slant pass to Khafre Brown, who snagged the reception, made one tackler miss and scored from 76 yards out with 10:42 left in the second quarter.

Not to be outdone, the Cavaliers scored the next 14 points to close out the half, using an 18-yard touchdown reception from Ra’Shaun Henry and a 1-yard rushing touchdown from quarterback/wide receiver Keytaon Thompson to take a 27-20 lead.

Without any timeouts and the ball at UVa’s 5-yard line with 12 seconds until halftime, the Tar Heels opted to throw a pass behind the line of scrimmage. It was fumbled and time ran out on the half, wasting UNC’s shot at tying the game.

Virginia took advantage of the flipped momentum in the second half.

Armstrong and company marched 75 yards in 11 plays to take a 34-20 lead. Wayne Taulapapa joined the scoring party, sprinting through a massive hole from 2 yards out.

Mendenhall’s team kept pushing, increasing its lead to 41-20 when Armstrong found Tony Poljan for a 17-yard touchdown strike. The pass came after a fourth-down conversion for the Wahoos.

Howell did everything he could to keep the Tar Heels in the shootout. He tossed two more touchdowns to Brown to cut the deficit to 41-34 with 13:09 remaining in the game. The second of the two late touchdowns came after an Armstrong interception.

That’s when Armstrong engineered a fourth-quarter drive that coaches dream about their quarterbacks leading.

Needing points in a hurry, UNC turned to the Howell-Brown connection yet again. Two passes to Brown for 66 yards set up a 3-yard rushing touchdown from Javonte Williams to cut the deficit to 44-41 with 2:51 left.

North Carolina opted to kick the ball deep. The ball soared out of bounds, giving UVa the ball at its own 35.

Armstrong carried on first down before exiting the game with injury.

The Tar Heels forced a fourth-and-short after two solid defensive plays. Virginia opted to send the punt team onto the field, but Mendenhall had no intention of giving Howell the football back.

The snap went to Thompson, who lined up just about everywhere Saturday night. The Mississippi State transfer grabbed the ball and raced forward for the first down.

“I thought it gave our team the best chance after all that battle,” Mendenhall said. “I wasn’t gonna go out just passively.”

Virginia quarterback Brennan Armstrong (from right) reaches for a touchdown next to North Carolina defensive backs Cam’Ron Kelly and DeAndre Hollins on Saturday in Charlottesville.