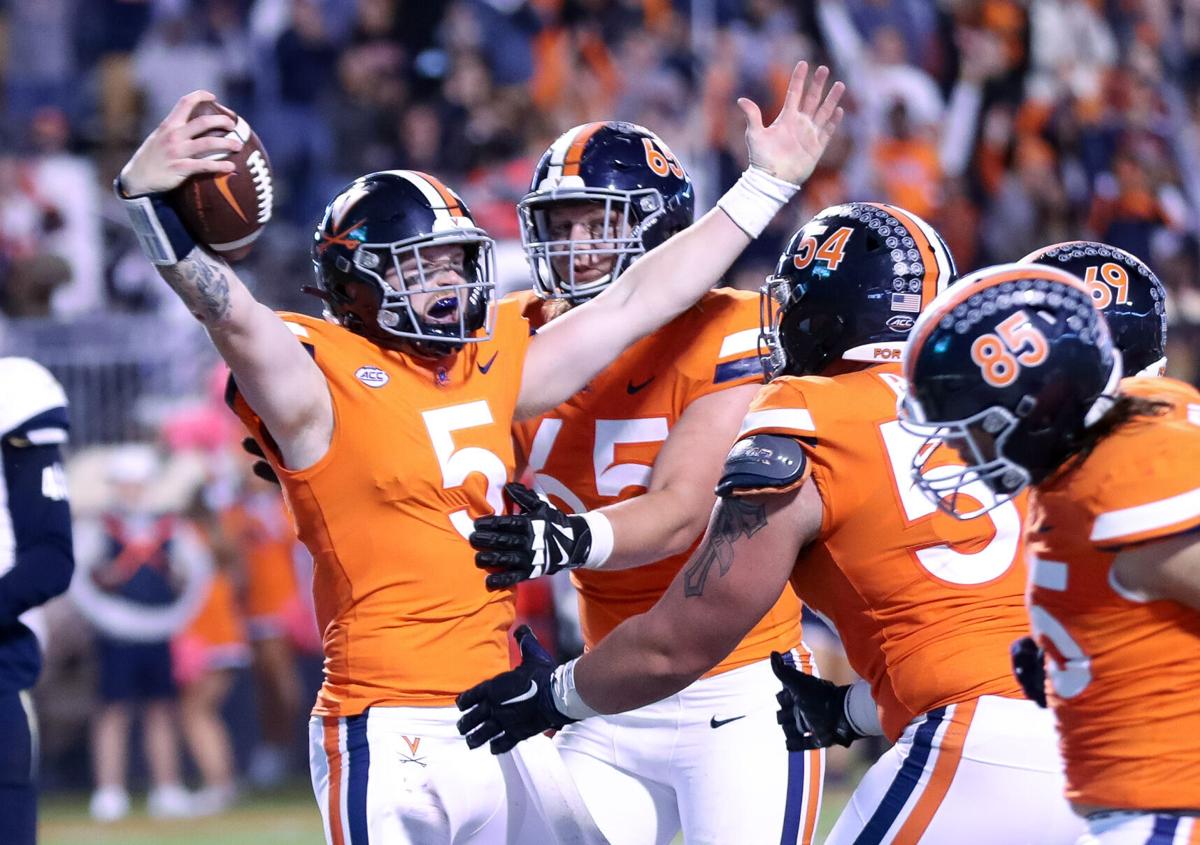 Virginia quarterback Brennan Armstrong (left) celebrates a rushing touchdown with teammates during the game against Georgia Tech at Scott Stadium.

CDP Virginia wide receiver Keytaon Thompson crosses the goal line to score a touchdown against Louisville during the second half on Oct. 9. Virginia won 34-33.

Wednesday was scheduled to mark the conclusion of Virginia’s football season, but unfortunately, the Cavaliers’ trip to the Fenway Bowl was canceled earlier in the week — due to coronavirus issues — and the campaign ended abruptly without the chance to finish on the field.

The final few weeks of the regular-season slate didn’t go their way either.

Virginia lost four straight games to end the year with a 6-6 record and short of goals such as capturing the Atlantic Coast Conference’s Coastal Division and taking the Commonwealth Cup.

What followed was the most notable news regarding UVa’s 2021 operation, when former coach Bronco Mendenhall announced on Dec. 2 he’d walk away from his post leading the Hoos after their appearance in a bowl game.

It was the end of a six-year run for Mendenhall, who led the Cavaliers to four bowl berths, including a trip to the Orange Bowl two seasons ago on the heels of winning the Coastal Division. He was 36-38 overall in the job, but transformed UVa into a winner. The Cavaliers went 34-28 after Mendenhall’s first season — a 2-10 showing in 2016, which came after four straight losing years under Mike London.

“Coach Mendenhall and his staff have advanced the football program,” UVa athletic director Carla Williams said in her opening comments before introducing ex-Clemson offensive coordinator Tony Elliott as the Cavaliers’ next head coach on Dec. 13.

The reins are Elliott’s now, and he’s already started building his staff by retaining three of Mendenhall’s assistants. And there will be plenty of time to peek ahead at what Elliott has planned, but with Mendenhall’s stint at UVa done and another season in the books, here’s a look back at his final year in charge.

Trailing 30-13 early in the fourth quarter at Cardinal Stadium, the Cavaliers could’ve folded against host Louisville.

Instead, they plotted a fourth-quarter comeback to beat the Cardinals on Oct. 9. UVa scored 21 points in the game’s last 15 minutes to win, 34-33. Cavaliers quarterback Brennan Armstrong threw a pair of touchdowns in that final stanza, including one to tight end Grant Misch with 22 seconds left to tie the game and set up kicker Brendan Farrell’s game-winning extra point.

“To Brennan’s credit and our team’s credit,” Mendenhall said afterward, “they just kept chipping, climbing, and fighting and coming back, and they’re really resilient.”

Louisville missed a field-goal attempt for the win as time expired, marking the second straight week that had happened to Virginia in a win. The victory at Louisville was UVa’s second during a four-game winning streak that brought the Hoos to 6-2.

Virginia had opportunities in the fourth quarter to beat its rival Virginia Tech on Nov. 27.

The most glaring chance was in the contest’s waning moments with the Cavaliers set up inside the Hokies’ 10-yard line with a chance to go ahead. But on third down, Robert Anae’s penultimate call as Virginia offensive coordinator was for Armstrong to throw a lateral pass behind the line of scrimmage to left tackle Bobby Haskins. He was tackled for a loss of 5 yards, leaving Armstrong only one shot to throw the ball into the end zone on fourth down.

On fourth down, Armstrong’s pass fell incomplete and Virginia Tech hung on to win, 29-24.

In the third quarter at Miami on Sept. 30, Cavaliers wide receiver Dontayvion Wicks secured a touchdown catch that likely will be shown on highlight reels for years.

Armstrong heaved a pass down the seam in search of the end zone only to have it broken up by Miami defensive back Marcus Clarke. The ball bounced off Clarke’s hands and as both Clarke and Wicks fell toward the ground, the ball landed on Wicks’ back. As Wicks rolled over, the ball popped up in the air and he snagged it with one hand while lying in the orange-painted end zone for a 36-yard touchdown. UVa went on to win 30-28.

Armstrong set school single-season records for passing (4,449 yards), total offense (4,700), passing touchdowns (31) and completions (326). He led the ACC in total offense and passing yards, and he was a third-team All-ACC choice and earned the Bill Dudley Award, which goes to the top college football player in the Commonwealth.

Wicks was a first-team All-ACC selection while setting the school single-season mark for receiving yards with 1,203. Oluwatimi was an All-American and a finalist for the Rimington Award, given to the nation’s top center annually.

Linebacker Nick Jackson led the ACC with 117 total tackles, and defensive back Anthony Johnson had three interceptions to go along with nine pass breakups.

In his do-it-all football player role, former quarterback Keytaon Thompson became a trustworthy rusher and receiver for the Cavaliers.

Anae figured out he could line Thompson up in the slot, out wide and in the backfield, and that Thompson was going to positively impact the game. Thompson made 78 catches for 990 yards and a touchdown and rushed for 247 yards and four touchdowns on 39 carries.

Jelani Woods probably helped his NFL Draft stock during his lone season with the Hoos. The graduate transfer and former Oklahoma State tight end was a matchup nightmare.

The offense was dynamic and on top of the individual records achieved by Armstrong and Wicks, the unit was one of the toughest in the country to stop. UVa averaged 34.6 points per game and tallied 415 points for the year — the third most in a single-season in school history. UVa was only 34 points shy of tying the all-time mark of 449 set by the 2019 team over 14 games.

Had the Hoos made their appearance in the Fenway Bowl, they might have been able to set a new record for total points in a season.

“The offense, I’m not sure it’s not the best ever here,” Mendenhall said last week.

The Cavaliers were also the only team this year in the FBS to have five receivers with at least 500 receiving yards — Wicks, Thompson, Woods, Ra’Shaun Henry and Billy Kemp IV.

Virginia quarterback Brennan Armstrong (left) celebrates a rushing touchdown with teammates during the game against Georgia Tech at Scott Stadium.

CDP Virginia wide receiver Keytaon Thompson crosses the goal line to score a touchdown against Louisville during the second half on Oct. 9. Virginia won 34-33.