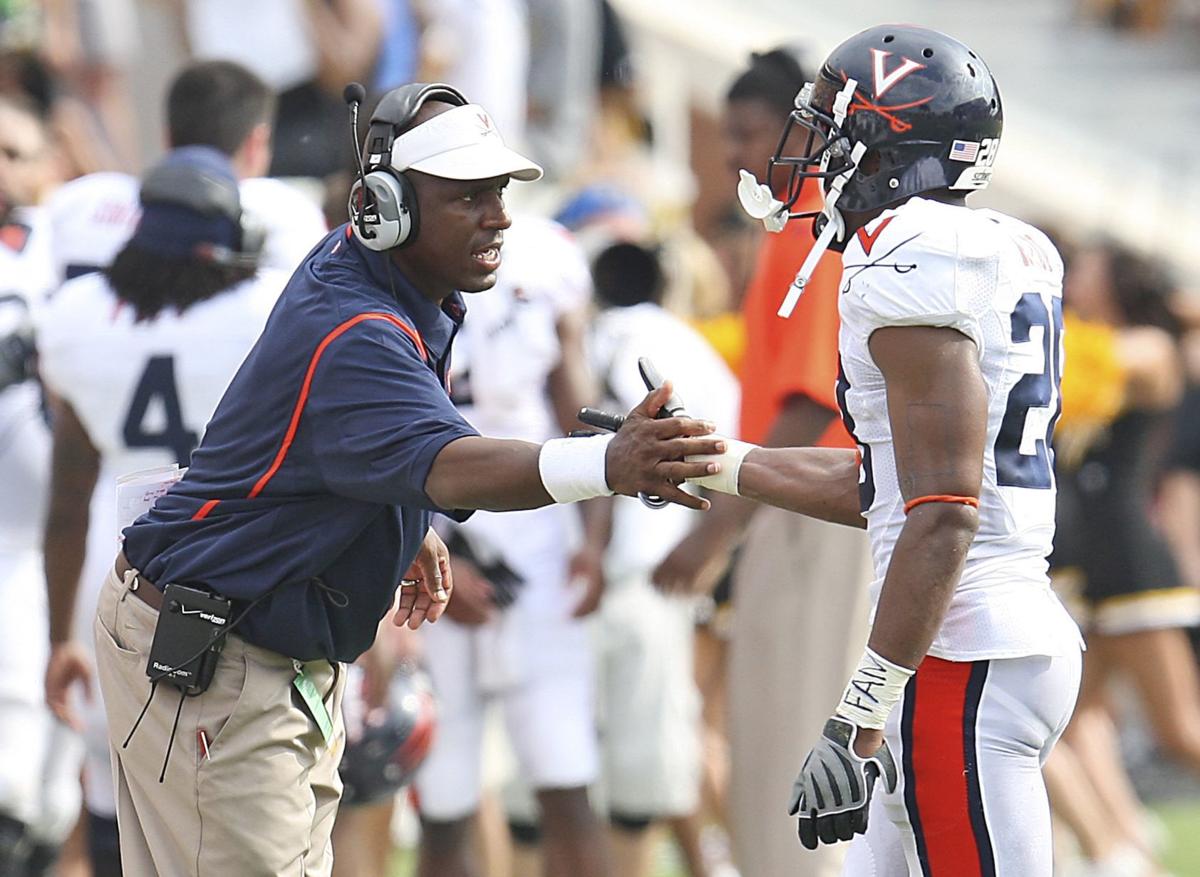 Anthony Poindexter (left), who was elected last year to the College Football Hall of Fame, spent 11 seasons on the coaching staff in various capacities after his playing career ended. 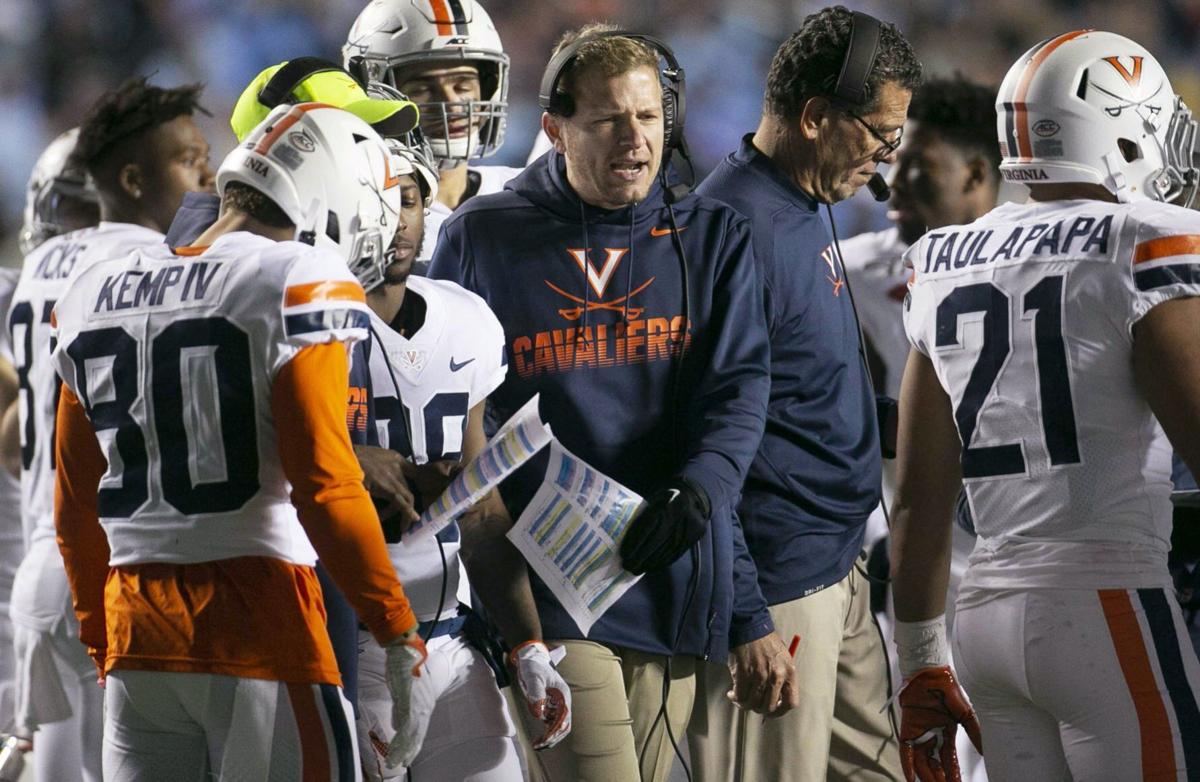 Virginia quarterbacks coach Jason Beck talks with players during a timeout in the fourth quarter against North Carolina. 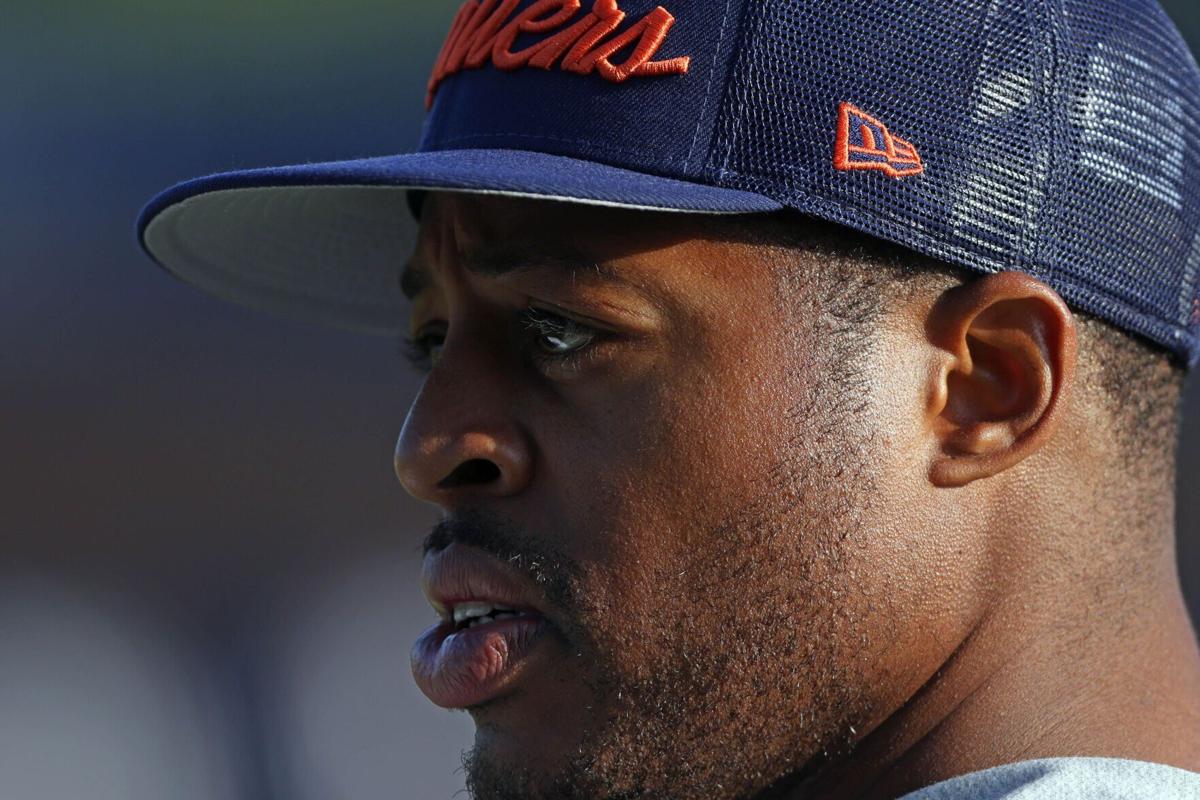 CHARLOTTESVILLE — Virginia is in the market for a new football coach on the heels of Bronco Mendenhall’s stunning decision to step down from his post following the Cavaliers’ bowl game.

His announcement, which came Thursday evening, made UVa the 25th program across the FBS in this cycle to have to search for a new leader. Mendenhall said he’d assist or advise UVa athletic director Carla Williams if she seeks his help in finding his successor.

“I’m certain that whoever is chosen for our program will be exceptional,” he said, “and whoever is lucky enough to join as an assistant coach and a player, it will be an amazing experience for them as it has been for me.”

Here are some internal and external candidates for the Hoos to consider for their top job (candidates are listed in alphabetical order):

The Cavaliers’ quarterback coach has shown a propensity for developing players at the most important position on the field. Under his watch, former signal-caller Bryce Perkins set the school’s single-season passing record in 2019 only to have it broken this year by junior quarterback Brennan Armstrong, who has thrown for 4,449 yards and 31 touchdowns. Having Beck stay put on the staff or rise in an elevated role could entice Armstrong to stay for his senior year. Beck followed Mendenhall to UVa from BYU, where he was the quarterbacks coach from 2013-15. His other stops include a stint as Division II Simon Fraser’s (Canada) offensive coordinator in 2012 and a three-year run as quarterbacks coach at FCS Weber State.

In his nine seasons as UVa’s wide receivers coach, Hagans has regularly produced outstanding pass catchers. From Darius Jennings to Olamide Zaccheaus to Dontayvion Wicks and Keytaon Thompson, the Cavaliers haven’t been short on perimeter weapons thanks to Hagans helping those receivers fine-tune their skills and develop. He’s an alum, too, having played at UVa from 2000-05, and a native of Hampton, so he’ll have full comprehension of the importance of recruiting in the Commonwealth and can lead the Cavaliers to make strides there.

The third-year James Madison coach has done a superb job leading the Dukes. He’s 31-4 there with one appearance in the FCS title game. JMU is the third seed in the current FCS playoff field. Cignetti has 11 total seasons of head-coaching experience with previous stops at Elon and Division II Indiana University of Pennsylvania. He’d bring with him a lifetime of football knowledge, too, having grown up in a football family. His dad, Frank Cignetti Sr., is in the College Football Hall of Fame and brother, Frank Cignetti Jr., is the offensive coordinator at Boston College. On his way up the coaching ranks, Cignetti worked as an assistant for Nick Saban at Alabama and logged time in the ACC at N.C. State under Chuck Amato.

Elko is in his fourth season as defensive coordinator at Texas A&M, but he has East Coast and Commonwealth ties and valuable experience in the ACC. He’s a native of South Brunswick, New Jersey and a Penn graduate, who was a longtime staffer of current Wake Forest coach Dave Clawson. He worked three seasons (2014-16) as DC at Wake for Clawson ahead of leaving for the same job at Notre Dame and eventually A&M. But he also spent time with Clawson at Richmond in the mid-2000s. He’s worked plenty at high-quality academic institutions and that could be attractive and fit UVa, too. And most importantly, his defenses have been excellent as well, and defense is an area the Cavaliers need to improve. This season, Texas A&M is fourth nationally in scoring defense (15.92 points allowed per game).

Clemson’s offensive coordinator and longtime assistant, Elliott, was the 2017 Frank Broyles Award recipient — given to the nation’s top assistant coach annually. He’s worked in different capacities on coach Dabo Swinney’s staff as well. Elliott was the running backs coach from 2011 through 2014 before adding the coordinator responsibilities. He switched from guiding the running backs to coaching the tight ends this year while adding the title of associate head coach. With the Tigers, he was responsible for offenses in 2018 and 2019 that eclipsed 650 points in each season. Only one other school — Yale in 1888-89 — had put together back-to-back 650-point seasons in the history of the sport.

The first-year Marshall coach had a solid debut season, guiding the Thundering Herd to finish 7-5 in the regular season and reach bowl eligibility. Ahead of landing his first head-coaching job, he was around many great and very good coaches during his time as an assistant. Huff worked at Alabama for Nick Saban, at Mississippi State for Joe Moorehead and at Penn State and Vanderbilt for James Franklin. He’s considered a coach-on-the-rise in the industry and likely will draw interest to fill the vacancy at Duke — the other ACC school currently in search for a head coach.

Before earning her current gig as athletic director at UVa, Williams was an athletic administrator at Georgia. So, she may know some folks in Athens, Ga., who would recommend Lanning — the fourth-year Bulldogs assistant who has served as their defensive coordinator for the last three seasons. Georgia is fielding an all-world defense under Lanning’s direction this season. The top-ranked Bulldogs play in the SEC championship game on Saturday and are likely bound for the College Football Playoff on the strength of a defense that is first nationally in scoring defense (6.92 points allowed per game) and total defense (230.8 yards allowed per game) and fifth in sacks (3.42 per game).

One of the more prominent players in UVa’s history, Poindexter would be happily welcomed back to Charlottesville by fans and his fellow alums. He’s currently in his first season as Penn State’s co-defensive coordinator and safeties coach, but has worked 18 years as an assistant in college football. His other stops include a prior 11-year stint as a Cavaliers’ assistant. He held all different titles, too, as a graduate assistant, running backs coach, defensive backs coach, safeties coach and special teams coordinator. His understanding of all those different positions is valuable and his ability to connect within the state matters, too. Poindexter grew up in Lynchburg and helped develop former UVa standouts who were also natives of the state like Ras I-Dowling and Chris Cook.

The second-year Old Dominion coach had one of the toughest assignments in all of the sport this season and handled it unbelievably well. Rahne’s Monarchs did not play games in 2020 because of the pandemic, so he did not coach a game in his first year at the school after leaving his job as Penn State’s offensive coordinator. And the way ODU began the year showed just that. The Monarchs started 1-6 before rallying to run the table to finish 6-6 and reach bowl eligibility for the second time in school history.

Clemson didn’t have the same success this fall that it’s had in recent years when it reached the ACC title game and CFP, but that wasn’t due to any drop off from the Tigers’ defense. Venables, now in his 10th season as Clemson’s defensive coordinator, has the nation’s second-best scoring defense (15 points allowed per game) and ninth-best total defense (308.4 yards allowed per game). UVa needs to upgrade its defense, which has given up more than 31 points per game and is 10th-worst in total defense this season. Drawing Venables away from Clemson could be difficult, and UVa likely wouldn’t be the only interested party. Oklahoma’s head-coaching job is open, and Venables was there before taking the DC gig in Clemson.

UVa outlasted Pittsburgh 66-61 in a game that saw the two teams combine for 36 fouls, the most in a Virginia ACC game this year.

Strong first half helps UVa get by Louisville, 64-52

Louisville hit just one of its first 10 attempts from 3-point range, a far cry from the barrage of 3s UVa allowed its last time out.

With most of his receivers back, Armstrong confident Virginia's passing game can be even better in 2022

"It’s going to be a great year and I’m super excited about it.”

'UVa is about to do a lot of winning': Tony Elliott making a strong first impression with state's high school football coaches

One challenge for Casey Morsell in transferring from UVa to N.C. State came in adjusting to the Wolfpack’s more vociferous approach to the game. Trash talk, Morsell said, is a part of the program at N.C. State

UVa looks to bounce back against Louisville

CHARLOTTESVILLE – Virginia basketball has followed each of its losses this season with a bounce back victory. The Cavaliers will try to do that again, this time, on a short turnaround.

The Cavaliers were just plain bad defensively Saturday against the Wolfpack.

Is The MLB HOF voting outdated?

Super Bowl LVI is almost here! A look back at some of the most popular ads of all time

Super Bowl LVI is almost here! A look back at some of the most popular ads of all time

A guide to the upcoming 2022 Beijing Olympic Winter Games

A guide to the upcoming 2022 Beijing Olympic Winter Games

Anthony Poindexter (left), who was elected last year to the College Football Hall of Fame, spent 11 seasons on the coaching staff in various capacities after his playing career ended.

Virginia quarterbacks coach Jason Beck talks with players during a timeout in the fourth quarter against North Carolina.