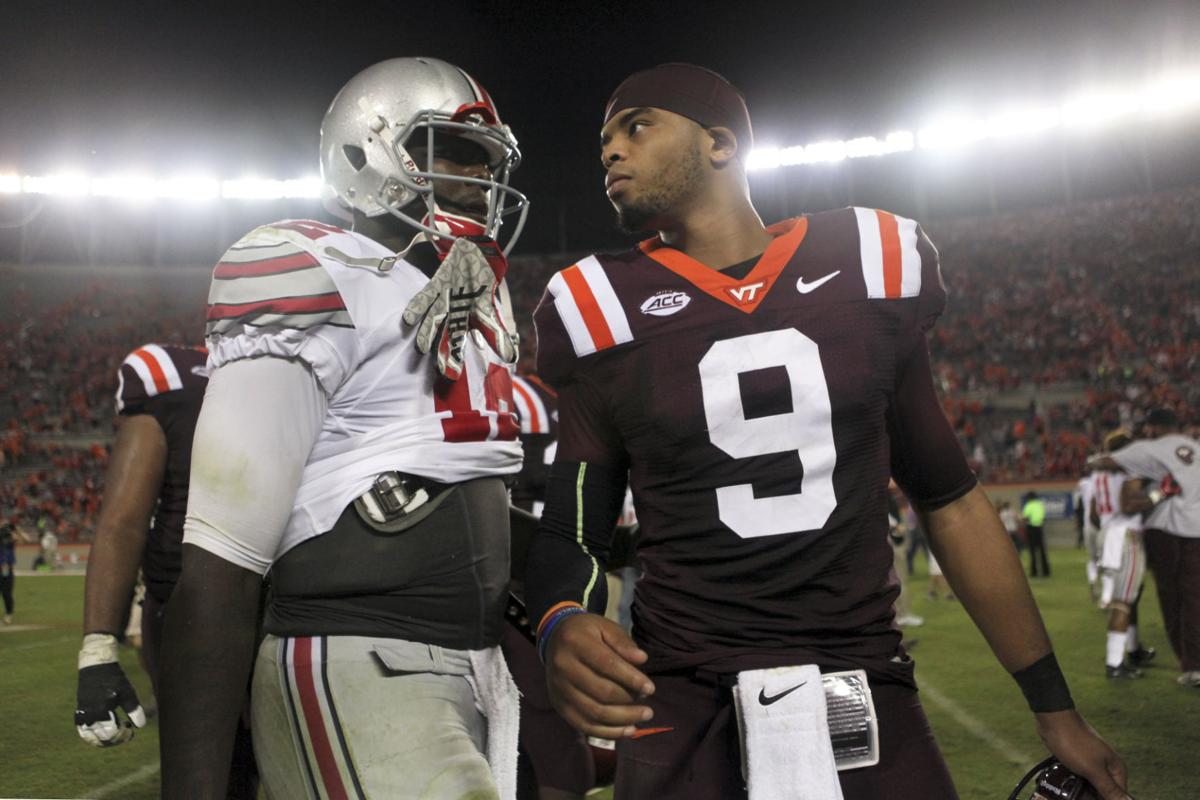 Ohio State quarterback Cardale Jones (left) greets Virginia Tech counterpart Brenden Motley after the Buckeyes’ 2015 victory over the Hokies. The Big Ten, including Ohio State, and the ACC, including Virginia Tech, are now part of an alliance with the Pac-12. 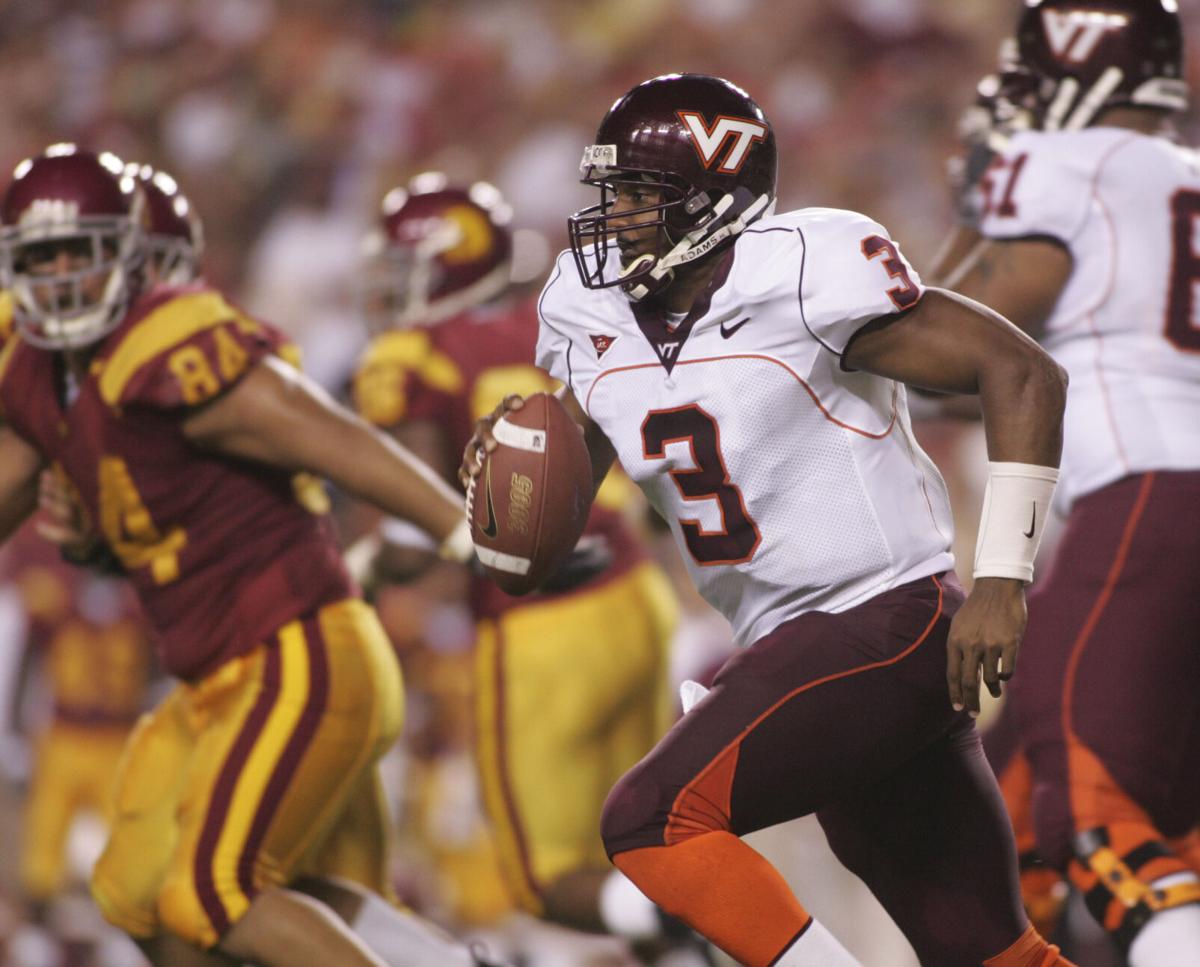 Virginia Tech's Bryan Randall runs during a 2004 game against Southern California. The ACC, including Tech, and the Pac-12, including USC, are now in an alliance with the Big Ten. 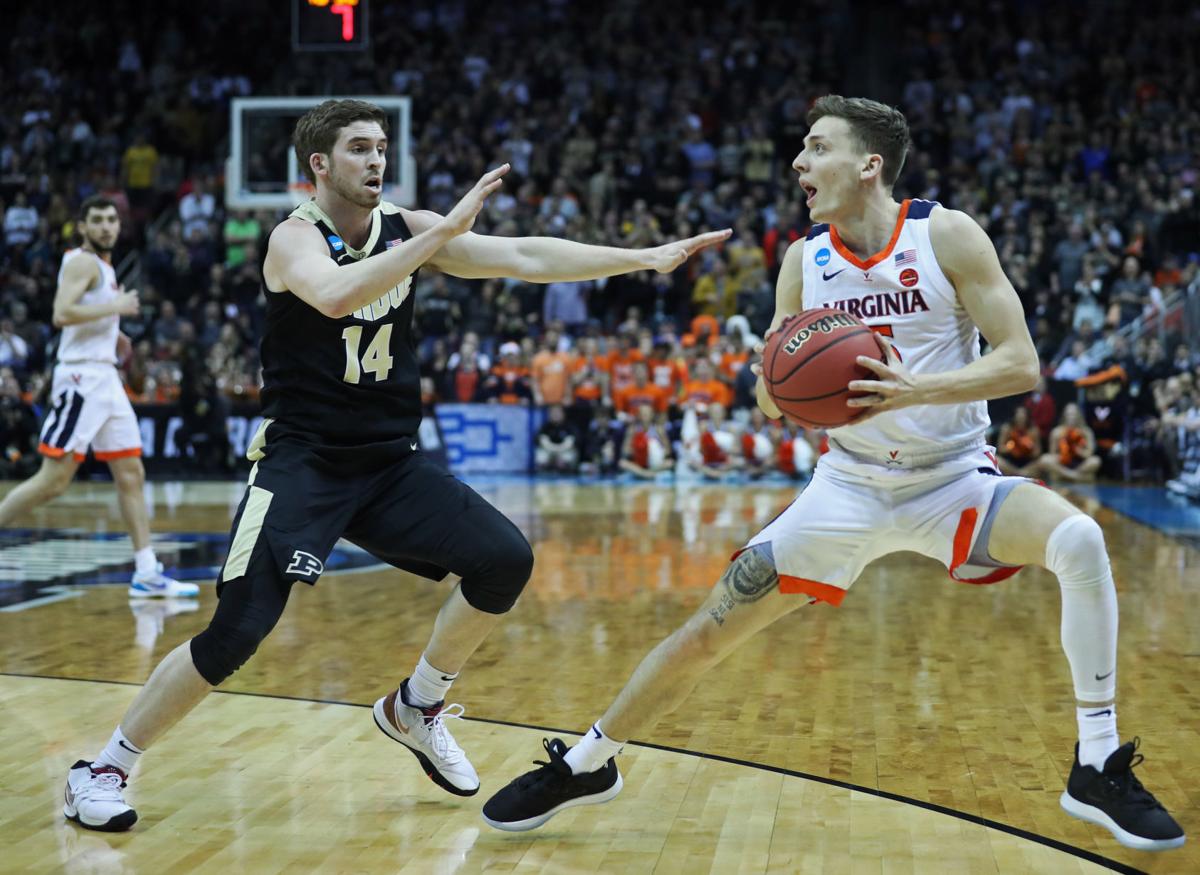 Virginia guard Kyle Guy (right) steps back to take a shot over Purdue guard Ryan Cline in the 2019 NCAA Tournament. The ACC, including UVa, and the Big Ten, including Purdue, are now in an alliance with the Pac-12.

One month after the Southeastern Conference strengthened itself by voting to add Texas and Oklahoma, the ACC, Big Ten and Pacific-12 responded by officially announcing an alliance among their three leagues.

The leagues will remain separate but vowed to work together on College Football Playoff and NCAA issues and to schedule more football and basketball nonconference games amongst each other.

"Our discussions centered on the unprecedented environment within college athletics today and how best we, together, can address the challenges ahead," ACC commissioner Jim Phillips said Tuesday on a video news conference featuring the ACC, Big Ten and Pac-12 commissioners.

"While motivated by our shared interest and common desire to help shape the future of college athletics, we are also driven by the exciting potential of a football and women's and men's basketball scheduling partnership, as well as unique collaborative events for our Olympic sports. We know that in the years ahead, our student-athletes, alumni and fans will benefit from thrilling new matchups."

Phillips said the three leagues "had a responsibility to stabilize a volatile environment."

"In the history of college athletics, one expansion of a conference has usually led to another, to another and to another," Phillips said. "We felt the stabilization of the current environment across Division I and FBS and Power Five in particular, this was a chance for a new direction. … We're better together."

The SEC, Texas and Oklahoma shook up the college sports world last month, setting off more conference realignment buzz. Expansion of the College Football Playoff was raised by a CFP subgroup last month. The NCAA could undergo an overhaul at a constitutional convention in November.

"Hopefully this will bring some much-needed stability in college athletics," Warren said. "It will allow people to understand where everyone else stands because some of the events over the last couple months have kind of shaken the foundation of the belief of college athletics."

No contracts were signed to make the alliance legally binding. So even though the alliance can be seen as an alternative to conference expansion, there is nothing to prevent any of the leagues from raiding each other for new members.

"It's about trust," Phillips said. "We've looked each other in the eye. We've made an agreement."

No new nonconference games were announced Tuesday. The leagues said in a news release that "the scheduling alliance will begin as soon as practical while honoring current contractual obligations."

The alliance does not mean there will be a flood of additional nonconference football games amongst the three leagues in the near future, given how schools book nonleague football foes years in advance.

The alliance also does not mean members will be tearing up existing contracts for nonleague games to create more games amongst the three leagues.

"We're not going to interfere with any existing contracts," Warren said. "This is not about getting out of contracts and blowing anything up. This is about honoring those existing contracts but also building relationships between these three like-minded conferences as we look forward from a scheduling standpoint."

None of the three leagues are as rich as the SEC, which will no doubt get more TV money with the addition of Texas and Oklahoma.

So more nonleague football and basketball games amongst the three leagues in the alliance could increase their TV revenue. The Big Ten's TV deals end in 2023 and the Pac-12's deals end in 2024.

"There may be residual benefits from this alliance related to increased revenue opportunities, but that wasn't the focus of why we did the alliance," Pac-12 commissioner George Kliavkoff said. "We did the alliance to protect the collegiate model, to work together on these important issues and to create unique, new [scheduling] opportunities.

"Obviously, everyone's focused on finances. … The creation of these interconference games across all time zones with interesting new matchups provides all of us the opportunity to think about how that benefits our schools."

The ACC's deal with ESPN lasts until 2036, so it remains to be seen if ESPN would be willing to give the ACC more money during the run of that contract for alliance-created games.

Will more nonconference football games amongst the three leagues mean fewer chances for FBS schools such as Liberty and Old Dominion or FCS schools such as VMI and William and Mary to play ACC foes?

"There's no intention to stop our teams from being able to within the alliance also schedule games against any other conference," Kliavkoff said.

In early June, a four-man College Football Playoff subgroup proposed expanding the CFP from four teams to 12 — but that was before the SEC announced it was adding Texas and Oklahoma. SEC commissioner Greg Sankey was part of that four-man subgroup, but the ACC, Pac-12 and Big Ten commissioners were not.

The alliance members could try to reduce the number of teams in an expanded CFP and put off that expansion until TV networks in addition to ESPN are free to bid on the package.

"From an ACC standpoint, we haven't made a final decision about where we will fall," Phillips said.

The crippled Big 12, which will be losing Texas and Oklahoma in 2025, was not asked to be a part of the alliance.

"This [Texas and Oklahoma] transition isn't supposed to be taking place for another four years, but this group will … do everything we can to try to make sure … college athletics looks similar to what it is today."

The 41 members of the new alliance:

Ohio State quarterback Cardale Jones (left) greets Virginia Tech counterpart Brenden Motley after the Buckeyes’ 2015 victory over the Hokies. The Big Ten, including Ohio State, and the ACC, including Virginia Tech, are now part of an alliance with the Pac-12.

Virginia Tech's Bryan Randall runs during a 2004 game against Southern California. The ACC, including Tech, and the Pac-12, including USC, are now in an alliance with the Big Ten.

Virginia guard Kyle Guy (right) steps back to take a shot over Purdue guard Ryan Cline in the 2019 NCAA Tournament. The ACC, including UVa, and the Big Ten, including Purdue, are now in an alliance with the Pac-12.