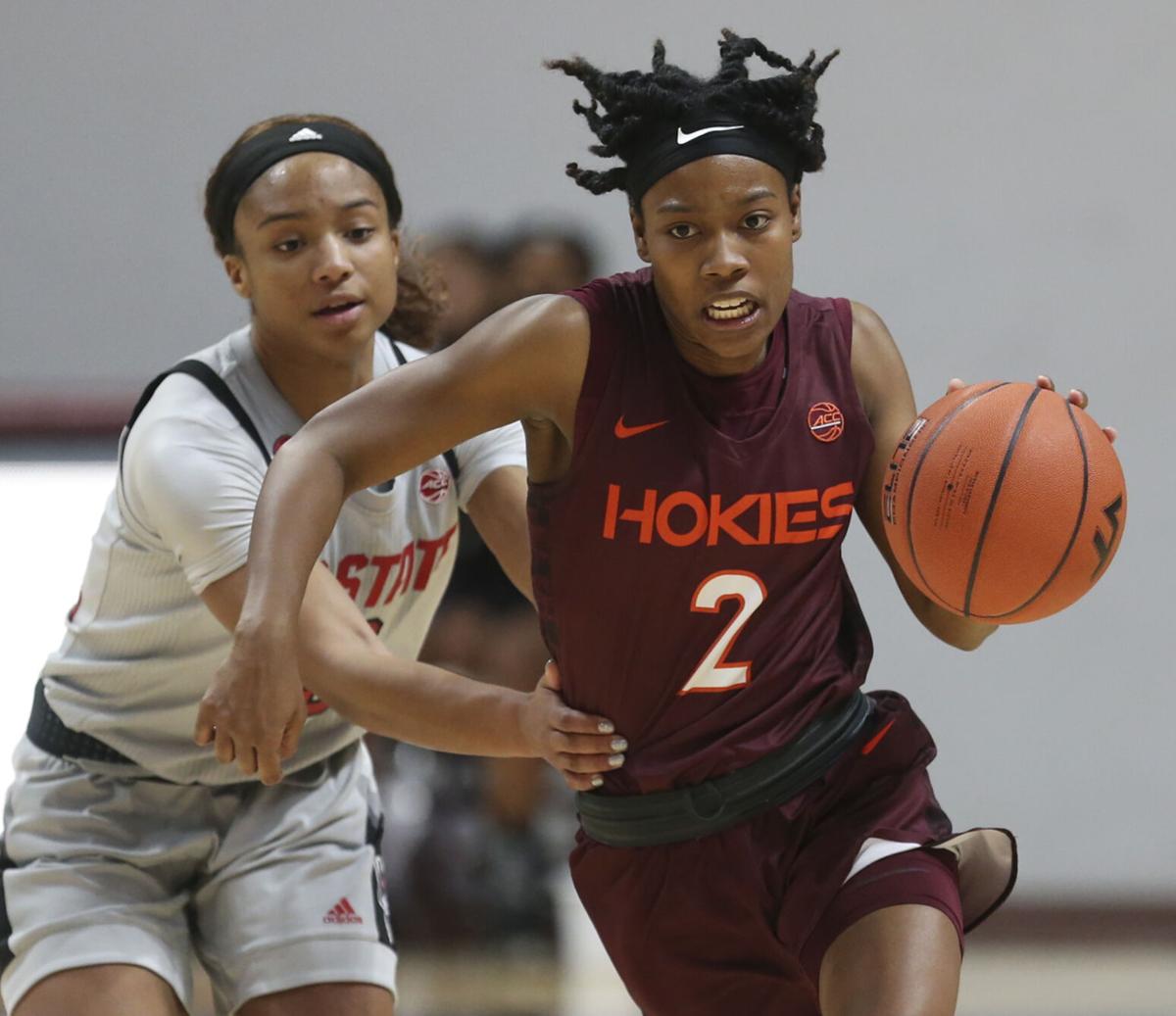 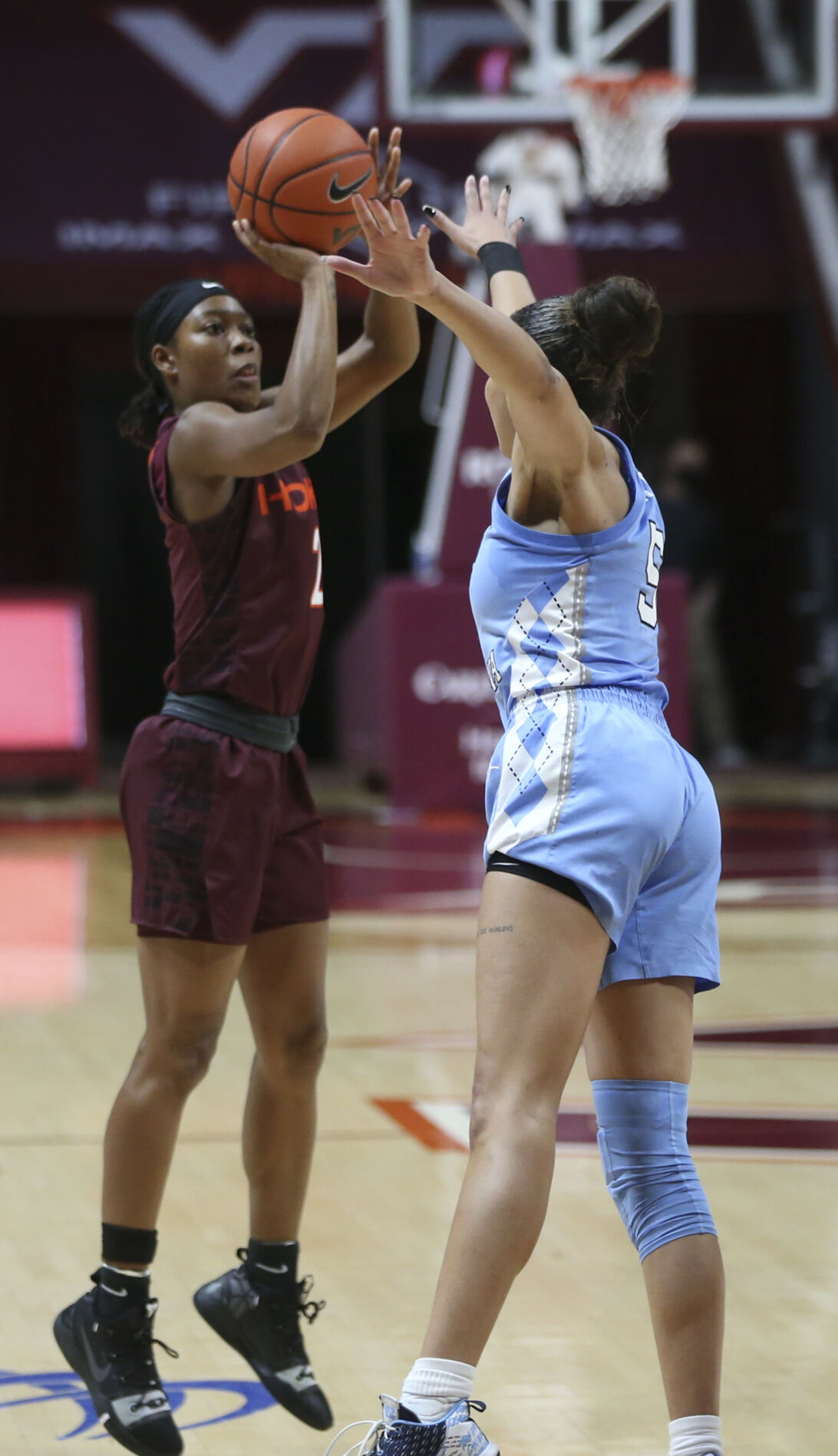 Virginia Tech’s Aisha Sheppard (left) owns the program records for 3-pointers in a career and season.

Aisha Sheppard is going to stick around for one final season in a Virginia Tech women’s basketball uniform.

Sheppard, who helped the Hokies make the NCAA tournament this season for the first time in 15 years, tweeted Monday that she has decided to return to Tech and use her extra year of eligibility.

Sheppard, who ranked third in the ACC in scoring (17.7 ppg) as a senior off-guard, had been considering entering next month’s WNBA draft. But the All-ACC pick told coach Kenny Brooks on Monday she was going to play a fifth season with the Hokies instead.

“I don’t have to try to replace the third-leading scorer in the ACC, so it’s a big smile on my face,” Brooks said Monday in a phone interview. “We have a very special bond, and the fact that I get to coach her for one more year … makes me very, very happy.”

Sheppard owns the Tech records for the most 3-pointers in a career (306) and in a season (87). She earned Associated Press All-America honorable mention this season.

“After much consideration from God, my family, and coaches I have decided to return for my senior year part 2,” she wrote in a statement on Twitter.

“I have enjoyed every moment on the court I was able to share with my teammates and all that we have accomplished throughout the years. However, I know that we are not satisfied and I am excited that I will have the opportunity to be a part of such an amazing program for another year. We are only trending upward and I am so excited for what is to come.”

The NCAA Division I Council granted all of this school year’s Division I winter-sports athletes an extra year of eligibility because of the coronavirus pandemic.

Players must renounce that extra year to be eligible for the WNBA draft next month. Sheppard had until Thursday to make that decision.

ESPN predicted in a mock draft last week that Sheppard would go in the second round to Chicago with the 16th overall pick (the fourth pick of the second round). But even second-round picks are not locks to make WNBA regular-season rosters.

“The state of professional sports — the WNBA but also overseas — I think that kind of weighed in a little bit [with Sheppard’s decision], just because there’s a lot of uncertainty with everything that’s going on as far as the world is concerned,” Brooks said. “She just weighed all her options and looked at an opportunity to be able to hone her skills a little bit better and make herself more marketable.

“She probably would’ve been somewhere in the second-round range. … Sometimes when you’re there, there’s no guarantees [to make a roster].”

The Hokies went 15-10 overall and 8-8 in ACC play this season. Their season ended with a second-round NCAA tournament loss to Baylor last week.

“If we can go a little bit further than we went this year, I think that makes her even more attractive [to the WNBA],” Brooks said. “She didn’t have a great showing in the NCAA tournament, just because she was nursing an injury.

“You get to that point, you want to be able to be as healthy as possible and be able to show on a bigger stage what she really is.”

The 5-foot-9 Sheppard ranks fifth in Division I this season in 3-pointers (87).

“She point-blank asked me, ‘What can you do to help me be more prepared [for the WNBA]?’” Brooks said. “We talked about … understanding different nuances and different ways people will play her and being able to make herself more attractive by being able to handle the basketball more.”

The return of Sheppard means Tech is now set to return all five starters, including All-ACC center Elizabeth Kitley.

“We will be able to build off of the chemistry we built,” Brooks said.

Sheppard graduated from Tech after only three years. She plans to graduate in August with a master’s degree. So Brooks said Sheppard will pursue a second master’s degree during the next school year.

Sheppard is the seventh-leading scorer in Tech history with 1,445 points and could move to No. 1 next season.

NBA Finals: What is the best result for the books?

Evan Hughes was named the Jim Nantz Award winner as the top collegiate broadcaster in the country.

Virginia Tech defender Devon Hunter reinstated to the football team, he had been suspended since September after being arrested on assault charges

Virginia Tech’s Aisha Sheppard (left) owns the program records for 3-pointers in a career and season.