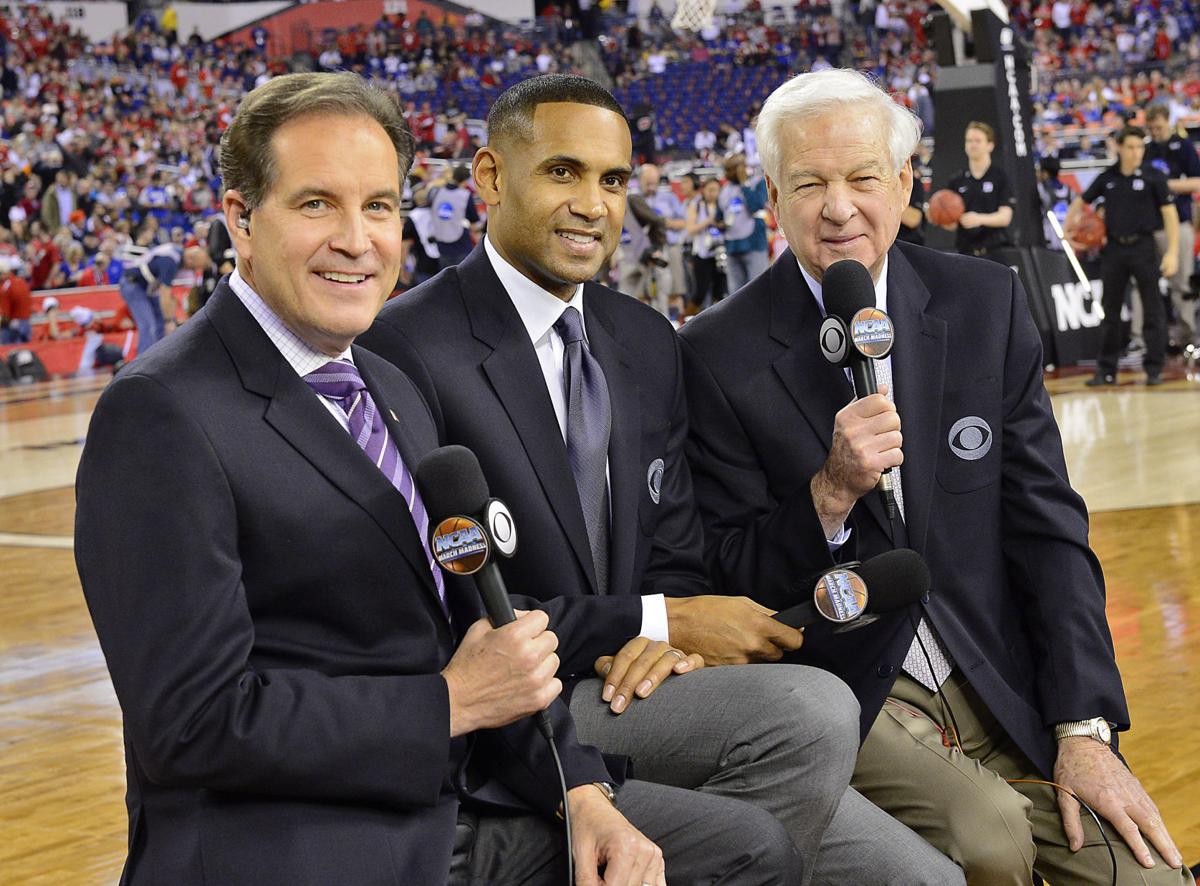 Jim Nantz (from left), Grant Hill and Bill Raftery will be the announcing team for the CBS coverage of Virginia Tech’s game with Florida on Friday. 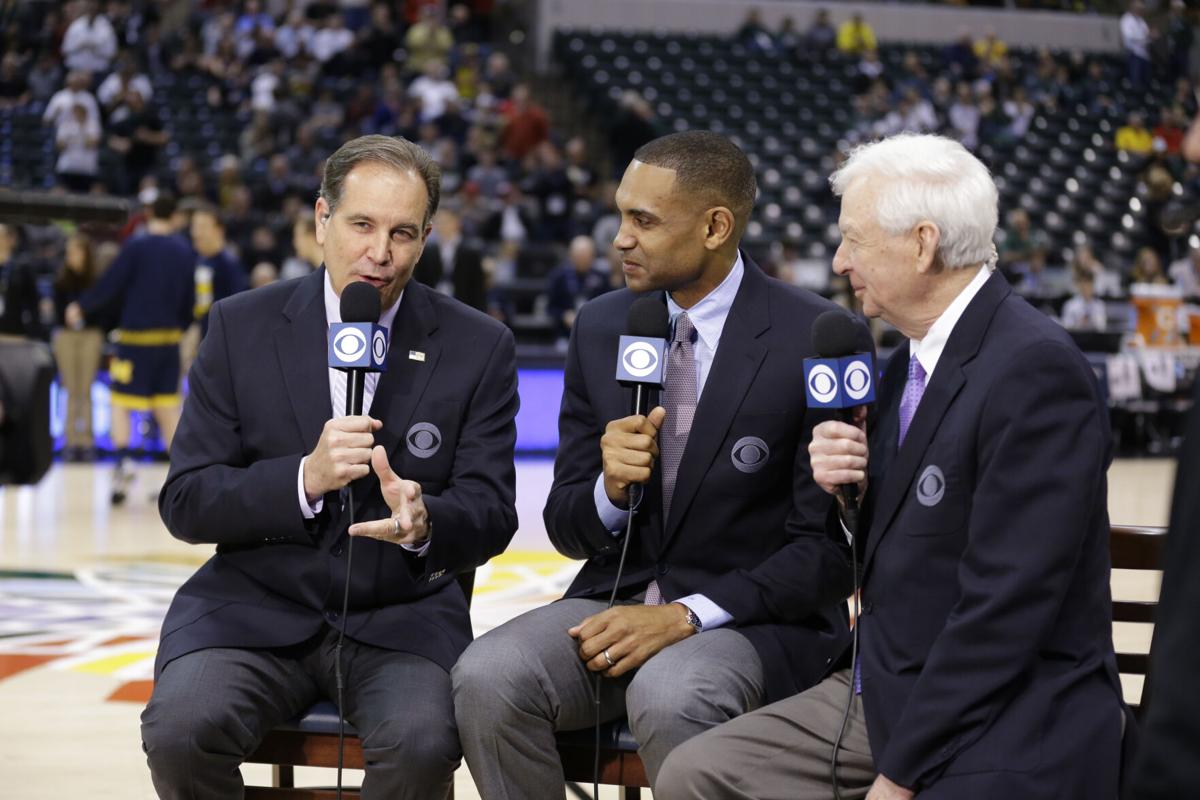 CBS broadcasters (from left) Jim Nantz, Grant Hill and Bill Raftery will be the announcing team for Virginia Tech's game with Florida on Friday.

Grant Hill is waiting to see what type of Virginia Tech team takes the court for the NCAA Tournament.

Hill and the rest of the tournament’s No. 1 announcing team have been assigned to the Hokies’ first-round game against Florida.

Jim Nantz will handle the play-by-play and Hill and Bill Raftery will be the analysts when the 10th-seeded Hokies and seventh-seeded Gators meet at 12:15 p.m. Friday on CBS (including WDBJ-7).

The Hokies (15-6) have endured two long layoffs because of COVID-19 concerns. They have played only three games since Feb. 6, losing two of them — including an ACC quarterfinal loss to North Carolina last week.

“Virginia Tech has not played a whole lot of basketball here as of late,” Hill said Monday on a CBS/Turner Sports video conference. “Will that work to their advantage in that maybe they’re fresh? … They haven’t just gone through a very tough conference tournament week.

“Or will they be rusty? Will they be a little bit out of sorts with the timing and whatnot? So that’ll be fascinating.

“It’s hard to say with Virginia Tech. You don’t know for sure, in my opinion, what team you’re getting because they’ve missed so much time and played so … few games in the last month.”

“Aluma is a tough, tough out and big-time player,” Raftery said.

CBS and Turner Sports are once again teaming up to televise the NCAA men’s basketball tournament on four networks (CBS, TNT, TBS and truTV). The Virginia Tech-Florida duel will be the opening game of the entire round of 64 (after the First Four games air on Thursday).

The entire tournament will take place in the Indianapolis area because of the coronavirus pandemic. Virginia Tech’s game Friday will be held at Butler’s historic Hinkle Fieldhouse, which was made famous by the movie “Hoosiers.”

“The fact that we have Hinkle with the first game of the tournament on Friday — and we’ll do three games from Hinkle on Friday — that is a thrill,” Nantz said. “I’ve never been there for a game, and to be able to call some NCAA Tournament action at Hinkle Fieldhouse, I’m into it big-time.”

Hill lives in Florida, so he knows all about Florida coach Mike White and the seventh-seeded Gators (14-9).

“Mike White has done a fantastic job with that program,” said Hill, a former Duke standout. “They have athletes that can finish at the rim. Certainly a good matchup, for sure. I’m excited to see that.”

The Gators’ best player, Keyontae Johnson, has been sidelined since collapsing on the court in December.

“Without Keyontae Johnson, which is a terrible story — Thank God he’s healthy [and now helping the team as a student coach] — and yet this team has been able to sustain it,” Raftery said. “This is a fun team to watch, Florida, and they can score. … Scottie Lewis is going to be a big-time player playing in the [NBA] … at some point.

“It’ll be an interesting matchup. I’m looking forward to it because I think it’s different styles, different outlooks, different philosophies.”

Fourth-seeded Virginia (18-6) will meet 13th-seeded Ohio University (16-7) at 7:15 p.m. Saturday at Indiana University’s Assembly Hall in a game that will air on truTV.

But it remains to be seen how sharp UVa will be.

One day after beating Syracuse in the ACC quarterfinals, Virginia had to withdraw from the ACC Tournament last Friday because a UVa player tested positive for COVID-19. That player, who has not been named, is expected to miss the first two rounds of the NCAAs.

The majority of the UVa team is in quarantine because of contact tracing, so a team-wide practice can’t take place before Thursday. UVa is not expected to fly to Indianapolis until Friday.

“I love this Virginia team,” studio analyst Wally Szczerbiak said. “I think a lot of people have been sleeping on them.

“[But] this is concerning to me, it really is. … I have UVa, in my bracket, I have them going to the Sweet 16. … But this is obviously an issue that might make me want to change my decisions as far as how far I think they possibly could. go. It’s not easy to take a week off right before you’re going to play a game. You never know how a team’s going to react.”

Szczerbiak will be in a New York studio for the tournament with Greg Gumbel, Seth Davis and Clark Kellogg.

Kellogg, whose son Nick played for the Ohio University team that reached the Sweet 16 in 2012, is impressed with the Ohio squad that will face UVa on Saturday.

“This team they have this year is very, very similar to the team in 2012,” Kellogg said. “They have a dynamic point guard — Jason Preston is one of the elite stat-sheet stuffers in college basketball.

“They’ve got a big guy, Dwight Wilson III, who can score.

“This team, with Virginia at full go, was going to be problematic for the Cavaliers. … So this is very, very intriguing from that standpoint, what the Bobcats represent and can bring to the court, but also because of what’s going on with Virginia.”

Carter Blackburn will do the play-by-play for the UVa game, with Debbie Antonelli the analyst.

Kenny Smith and Charles Barkley will be in an Atlanta studio for the tournament with Ernie Johnson and Candace Parker.

What was the craziest story in sports yesterday?

Will we see Max Scherzer traded?

Will we see Max Scherzer traded?

How may players on the Cubs will be traded before the deadline?

How may players on the Cubs will be traded before the deadline?

In the region: Virginia Tech to host Radford in men's basketball

Plus baseball and more.

Jim Nantz (from left), Grant Hill and Bill Raftery will be the announcing team for the CBS coverage of Virginia Tech’s game with Florida on Friday.

CBS broadcasters (from left) Jim Nantz, Grant Hill and Bill Raftery will be the announcing team for Virginia Tech's game with Florida on Friday.